TORONTO — Consequences, a Slovenian drama about the burgeoning sexuality of a teenage boy entering a youth reform center, is the first film from Slovenia to play at the Toronto International Film Festival in almost a decade.

Warning: Spoilers ahead for the film.

After troubled teenager Andrej (Matej Zemljic) finds himself at a court-ordered youth detention centre, he faces toxic masculinity incarnate in the form of Željko (Timon Sturbej), the ringleader of the center’s gang. Andrej embarks on a violent and sexual spree with Željko that ultimately finds the two in bed together. Once Andrej begins to fall for Željko, Željko uses Andrej’s own sexuality against him, leading to a chilling end.

INTO caught up with Slovenian native Darko Stante, the film’s director and writer,  to talk about why he wanted to make the film and what he hopes people in Slovenia could learn about its gay youth and the broken reform system.

So, the film is based off of your own experiences working in the system in Slovenia. Can you talk about what made you want to transfer those experiences into a film?

OK, first, the revelation that the system doesn’t work like it should. It was my first. And the second, I found it very intriguing to work on the idea of what would happen if, in an institution like that, if some of the guys would be gay — what would happen? It’s an institution like a prison or the army. And as you know, gays in those kinds of environments, they’re not accepted like they should be. And I wanted to research this theme for this picture and maybe to put some topics or ideas to the public that we could talk about, that the public could talk about. It’s an issue we should talk about.

One of the things I was most struck by is that Andrej (Matej Zemljic) in The Centre goes from, when he joins, being an outsider to slowly feeling a sense of belonging. You see that he’s never had that feeling before.

When you were writing Andrej, what do you think motivates someone like him to do what he did to fit in? What were you trying to say about his fitting in?

It is like that. He was abandoned by everyone. By his parents, by the society, actually and so he came there and Željko (Timon Sturbej) accepted him. So, to keep this love that he got from … OK, maybe love isn’t the right word, but you know what I mean … from Željko, he decides to do the things he’s doing, just because of that. Because he thinks that will put them together. That’s the thing that Željko loves him and if he does this, he can show him he loves him. It’s all the confused emotions you have when you grow up and he doesn’t recognize what real love is and he doesn’t see that Željko is actually using him. 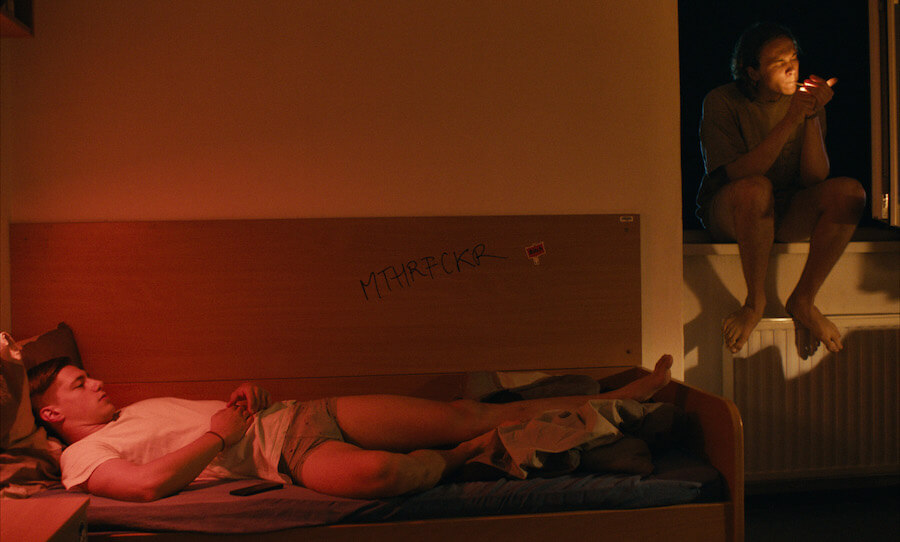 I don’t know if it translates well, if you’ve heard the phrase toxic masculinity.

Well, the film is about masculinity and the phrase is about how masculinity can be bad and cause people to do bad things, and I wanted to know your thoughts on what the film has to say about masculinity. You have that scene where they’re all in the gym together and they put him through tests.

Actually, I didn’t think much about that, if I’m honest. The scene was particularly, they’re testing him and at that moment when Željko decides to accept him and Andrej falls in love with him, for me it was that they’re like — it doesn’t translate well, but it’s peacocking, showing off. And that’s why all this, when they work out on those machines. My tension was that, that decision point that those two guys would be together.

No, I think that he also at some point, especially in the scene after they were sleeping together, when they go for a coffee, I think that’s the scene where Željko is the most honest. Even to himself. It’s just a small point in the whole story, but I think somehow he really likes Andrej. But, all the other things are more important to him. He can’t get over all these things: crime, even Svetlana. She has a power over him, over Željko and she’s the only one he listens to. And he can’t get over this. And that’s why he could never really be with Andrej.

It’s interesting, because I think when you fall for someone, a lot of it has to do with feeling safe with them and Željko is very violent, but Andrej sees a side of him no one else does.

They obviously see sex differently. Andrej sees it as sexual while Željko sees it as transactional, right? Would you say that? 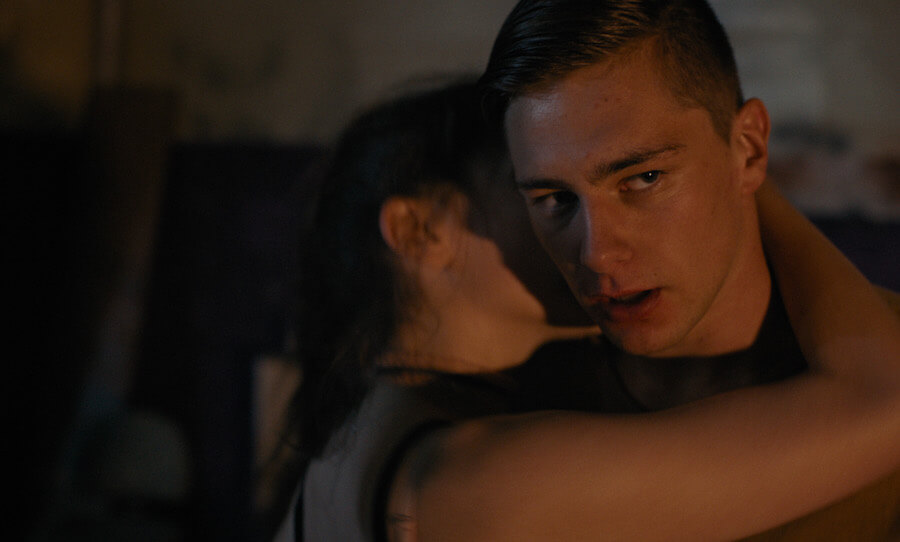 So, all the actors in the film, they’re not trained actors, correct?

Was there a reason you wanted to bring in people who weren’t trained actors?

I had an audition, a big audition, many people came, but the problem was that most of them were not capable of showing a range of emotions. So, I couldn’t use them in that way and I also knew that some of them would have, for the main roles, they would have problems with the gay scenes, you know? When they’re intimate. And I think it wouldn’t go well. So I knew I had to get guys from the academy for sure for those main roles, but then I saw for some other roles, they were very good, so I took them.

At the end of the film, Andrej’s outed on Facebook and it deals with the stigma of being gay in Slovenia. I was wondering, was that part of the impetus for this film?

It’s always the question, in Slovenia — is it an open country? It’s democratic, but it’s not so open as it seems. Slovenia is quite conservative. If you took out those main centers, the urban centers like Ljubljana, it’s the capital, the more you go to the outskirts, it gets more conservative. And right now, it’s all over Europe, especially in the middle of Eastern Europe, the right-wing parties are becoming stronger and it’s also in Slovenia. A lot of populists, they’ve become stronger and stronger and I think that gay rights — and other human rights — in general, are in danger because of that. I wanted to put this question, not just about LGBT rights, but also about other rights, even the institutions in the film, you see that it doesn’t work. I wanted also to put out the question of what gets those young people to come into the institution and stuff like that. I wanted to put out a lot of questions, actually. And I’d like society to talk about it.

I think those questions come up for me via the character of Andrej’s mom, because she seems like she’d be willing to take Andrej back even though he’s violent, but once he’s gay she’s like, “No, you’re not coming back home.” Like, that’s a bridge too far.

Yeah, that’s crazy. But you know that’s the thing I wanted to point out. It’s OK to be [violent] but not OK [to be gay].

I wanted to talk about the last scene. The extreme violence in the scene happens right after Andrej is rejected. He goes to kiss him and he’s rejected and then there’s the violent act and obviously Fifa, his rat, is dead. What do you think was going through Andrej’s head?

I think it was everything. He was abandoned by everyone. He saw that the system in this facility doesn’t work. Then, his mother says to him you can’t come home anymore. Maybe he didn’t want to come home, but if your mother says you can’t come home anymore, it hurts. It really hurts. Then he was exposed on the internet. That’s horrible. Željko killed his rat. It was like teh rat was the only being that loved him, in some way. It was his. And he killed it. And then [Željko] rejected him. He put all his feelings in Željko and he thought, “OK, now it’s over. Everything falls apart.” That’s how he felt and that’s why he acted like that. He didn’t have anything to lose anymore.

This interview has been lightly edited for length and clarity.