The gubernatorial hopeful lost the endorsement of the New York Democratic Party on Wednesday when incumbent Gov. Andrew Cuomo earned 95 percent of delegate votes at the New York State Democratic Convention. Nixon, who announced her grassroots candidacy in March, finished with just five percent of the vote; she needed 25 percent to earn an automatic spot on the primary ballot.

But Nixon’s team claimed the loss was “100 percent expected.” As her campaign spokeswoman Lauren Hitt told HuffPost, the setback isn’t a “significant hurdle.”

What happens now is that to compete in the September 13 primary race, the 52-year-old actress will have to collect 15,000 signatures to challenge Cuomowho has served since 2011for the governor’s office. Thus far, Nixon has campaigned against the Democrat’s mismanagement of the MTA subway system and his political centrism.

“I’m here because I think it’s important that at a Democratic convention there be at least one Democrat running for governor,” she claimed yesterday.

“I’m not a protest candidate,” Nixon added. “I’m a viable candidate who is really running hard for the Democratic nomination, and that’s why I’m here, to say this is my party, too, I’m not afraid and I’m here. You can’t shut me out.”

But should the Emmy-winner secure enough votes to take on Cuomo in four months’ time, the Democratic Convention illustrated that she will continue to face significant challenges. Former Secretary of State Hillary Clinton threw her considerable weight behind Cuomoa key ally during her presidential runin an unannounced appearance at the event.

Further snubbing Nixon’s campaign, Clinton told Wednesday’s crowd she was “inspired” by the wave of women “making their voices heard like never before” in this year’s elections. Nixon, who would be New York’s first female and LGBTQ governor, supported the popular-vote winner in 2016. 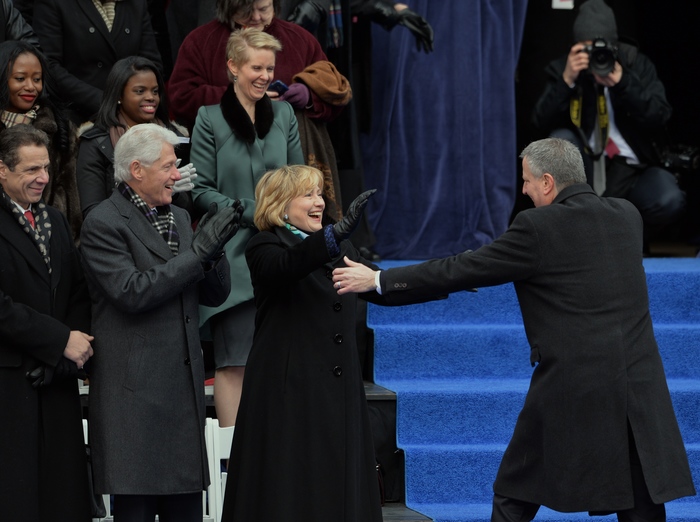 The Sex and the City alum left prior to Clinton’s speechwhich is expected to be followed by an endorsement for the incumbent governor from former Vice President Joe Biden on Thursday.

CNN further reported that many audience members booed when delegates cast their votes for Nixon.

Although the progressive trails her moderate challenger by a significant margin in the Democratic primary race, polls have shown that Nixon is gaining ground on Cuomo, whose approval ratings recently tied a record low. Cuomo led by 22 points in a May Quinnipiac University survey, but the political upstart managed to slice his lead in half from earlier polling.