Although Deadpool is openly pansexual in Marvel comics, the titular Merc with a Mouth has yet to give into his pansexual desires onscreen. The sexuality of fellow X-Force member Shatterstar isn’t explored in Deadpool 2 either, despite the fact that he’s both bisexual and polyamorous in the source material. Fortunately, Negasonic Teenage Warhead is here to save the day for LGBTQ representation this time around, as she’s introduced in the film alongside her new girlfriend, the chain-wielding mutant Yukio.

The scene in question takes place when Deadpool visits the X-Mansion for the first time and meets the couple together, holding hands. This alone would mark a major milestone for the comic book genre, as openly queer superheroes are still virtually nonexistent, let alone ones who enjoy a healthy relationship. What makes this representation even more powerful is that Negasonic Teenage Warhead explicitly tells Deadpool that the pair are an item, making it impossible to deny their queerness on screen.

From that point on, Deadpool makes an effort to interact with Yukio whenever he sees her and in the film’s final act, he even tells her and Negasonic Teenage Warhead that “You guys make a super cute couple!” Given that the first Deadpool film was the highest grossing R-rated movie of all time, this is a huge step forward towards normalizing queer relationships in the mainstream. Even more impressive is the fact that Negasonic Teenage Warhead is played by Brianna Hildebrand, an openly gay actor who is extremely vocal in her support of the LGBTQ community. 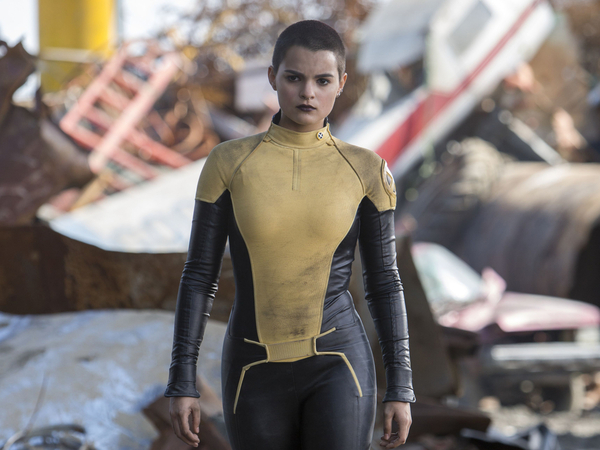 It’s hard to overstate how important this all is for queer representation, but unfortunately, Deadpool 2 still falls at the final hurdle, failing to pull off that superhero landing. Although the trailers hinted that Hildebrand’s role would be expanded for the sequel, the reality is that Negasonic Teenage Warhead is sidelined for the majority of Deadpool 2, remaining absent for huge chunks of the film. Both Yukio and Negasonic Teenage Warhead are pivotal in the final fight against Juggernaut, yet neither of them have much to say during Deadpool’s big moment at the end. By reducing Hildebrand’s part in the sequel, it sends out a mixed message, one that suggests she may be less important now that her character is officially queer.

However, it’s also possible that Negasonic Teenage Warhead just became redundant as a character once the script-writers decided to revolve the sequel around Julian Dennison’s new hero, Rusty Collins. In Deadpool 2, the titular Merc with a Mouth vows to protect the young mutant at all costs and set him on the right path, so attention was automatically diverted away from Negasonic Teenage Warhead, who had since outgrown Deadpool’s ‘mentorship.’ It wouldn’t make sense for there to be two adolescents learning the ropes in the same film, which somewhat legitimizes Hildebrand’s diminished role.

While this all might sound rather disparaging, there is some hope for the fans and it’s all thanks to Cable’s time travel device – but not in the way that you might think. Yukio and Negasonic Teenage Warhead kick off the post-credit scenes while working together to fix what appears to be Cable’s time-spanning technology. This moment will undoubtedly have a direct impact on the future of the Deadpool franchise, suggesting that the young couple will play a bigger role somewhere later down the line.

The credits themselves also hint at this when a drawing of Yukio’s character appears on screen with an annotation that states “The X-Force is strong with this one.” Given that an important plot point in Deadpool 2 was the formation of the X-Force team, this is rather promising. If Yukio becomes a key member of Deadpool’s group, then we’re sure that Negasonic Teenage Warhead won’t be far behind, particularly as she already shares history with the pansexual Merc.

A release date for X-Force has yet to be announced, but when the film eventually arrives in cinemas, we hope that the franchise will take a much needed step further into the realm of queer representation, pushing this couple to the forefront where they belong. After all, Hildebrand is already inspiring fans with her openness in real life. It’s about time that she and fellow co-star Shiori Kutsuna were given the opportunity to do the same on screen, reaching a wider audience than they ever could alone.