When the ladies in Stephanie’s Child met last summer, they had no idea they’d become best friends, touring the country’s 2018 Pride festivals and singing on The Voice’s season finale as the preeminent trio of singing drag queen pop stars. This Friday, Rosé, Lagoona Bloo, and Jan Sport promise to top their first year of success with sparklier costumes, bigger hair, and newer hits than ever at The Green Room 42.

INTO spoke to all three bois to get the scoop.

Rosé: I’m Ross McCorkell, and I’m from Scotland, and I moved to America when I was around 10 years old. I grew up half in Britain and half in Texas, and I went to school in the Midwest to obtain a degree in musical theater, and then I moved to New York about seven years ago, with Broadway dreams.

Jan Sport: My name is Jan Sport. I am a high-energy drag queen in New York City and I’m one third of Stephanie’s Child.

Lagoona Bloo: My name’s David Brumfield, also known as Lagoona Bloo, the mermaid pop princess from the bottom of the ocean.

How did Stephanie’s Child come together?

Lagoona: So, I had entered and started winning at Lady Liberty, which was put together by my now manager, Vincent Cooper, and I had done a competition once before, back when I was just playing with drag, and it was just a disaster, and it was… ugh. Such a nightmare. But I went back, and I was ready to really show who I was, and really show what I could do, to this community.

It was a weekly competition at the time, and I went the week prior to my week to go check out the competition to see how it was, what the space looked like, and everything like that. And I actually ran into some really cool people in nightlife that I really looked up to and I started talking to them and I was like, “Oh, you should come back next week. I’m going to be Lagoona Bloo. I’m going to be competing.” And someone was like, “Oh, you better watch out for Rosé.” And I turn around and meet Rosé, and she’s like, “Oh, I’m a live-singing drag queen, too,” and immediately my green eyes came out and I was like, “What?! Another singing drag queen?!”

And also, while I was away on tour, Jan Sport had started to emerge on the scene as a live-singing drag queen as well. I was aware of who they were, Jan Sport and Rosé, but we weren’t really friends, we didn’t really know each other at all. Well, Jan Sport had won Lady Liberty the year prior, so she was the crown holder, and then the next week Rosé and I competed against each other. And I remember going backstage.  Rosé had just seen me perform, and she was like, “Oh my God, you’re amazing.” And I was like, “Oh my God, you’re amazing.” And then I went and saw Rosé perform, and she was truly amazing. I was like, “Oh my goodness, this is incredible.”

Long story short, we go through the competition. I win that week, Rosé wins the next week, and then I win my semifinal, Rosé comes back and wins her semifinal. I go to Europe because I got contracted to go do a job in Europe — it was a great opportunity, I couldn’t miss out. And Rosé went on to win the whole competition.

Vincent Cooper, our now manager, was like, “Rosé, I want to help you create a show. What would you like to create?” Rosé says, “I want to sing with Jan Sport and Lagoona Bloo.” So this is all June, July… So we get together in July. We had talked to each other… maybe four or five times. Like, we didn’t know each other very well. But we sit down at this meeting and we start talking about maybe creating a show where we sing together, the three of us, in three-part harmony. And then right then and there, Rosé was like, “OK, Jan, you start here: ‘laaa,’ I’ll sing here, ‘laaa,’ and Lagoona, you sing the middle.” Whatever, right? And boom, without practice, we sang a song in three-part harmony like perfectly, and we all looked at each other with like our mouths just dropped open. We were like, “Oh my gosh, this is something”

And then, six weeks later, we put on this concert, Stephanie’s Child: The Writing’s On the Stall. [cackles] It was a play on Destiny’s Child: The Writing’s On the Wall, and it was a huge success, and it was just unbelievable. And through this girl group, we have become the best of friends. We are each other’s number one supporters. And like, you know, just truly inseparable. It’s kind of amazing. 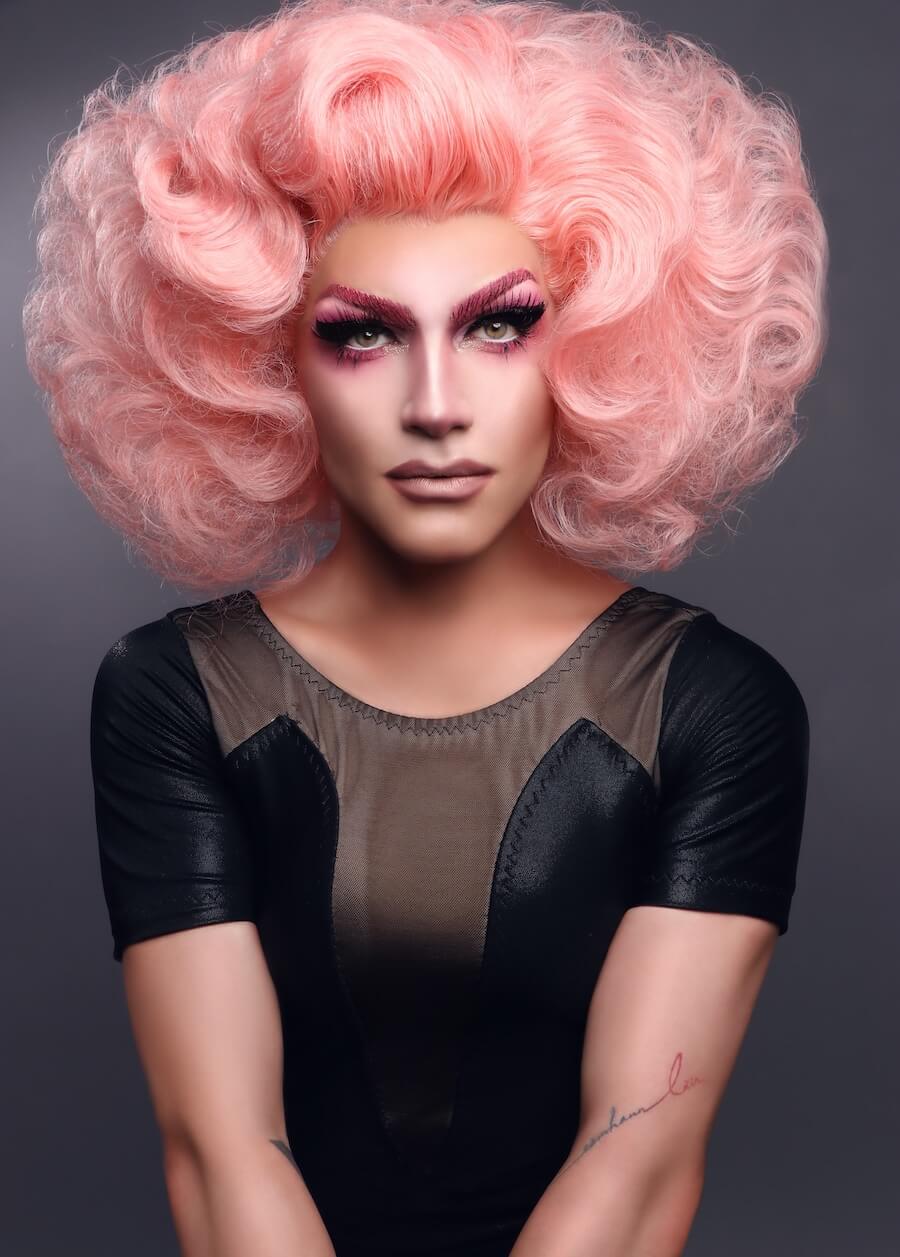 So what got you into drag to begin with?

Rosé: I decided, a little over a year ago, that I wanted to take my career in a slightly different, and more queer, avenue. And that’s when I decided to surrender to drag, which is when Rosé was born, in June of last year. And so Rosé is a New York City drag artist and musical comedian, as I’ve branded her. She is arguably the wittiest queen in all of New York and she’s definitely the most handsome.

Has doing drag changed anything about you?

Jan: Oh, 100 percent. I mean, it’s been the most life-changing thing possible. You know, ever since I was younger, I was always looking to put others before myself, and not leaving any time for myself to really grow and flourish. And I kind of was getting lost in my relationships with other people and boyfriends, and I never really focused on Charlie. And I started doing drag right after my boyfriend and I broke up and my best friend had moved to LA. So I kind of felt very isolated and alone. And it kind of forced me to focus on something that I wanted to do, and what made me, Charlie, happy, and I just poured my heart and soul into Jan.

And now that I’m putting more effort into myself, and into Jan Sport, and into my career, I’m able to give that love to my friends and to my boyfriend and to everybody around me in a way that I wasn’t sure was possible, because I didn’t know that I can do so much for myself and for other people. But now that I’m more sure of who I am, I’m definitely able to give that love in a way that I think I never anticipated. 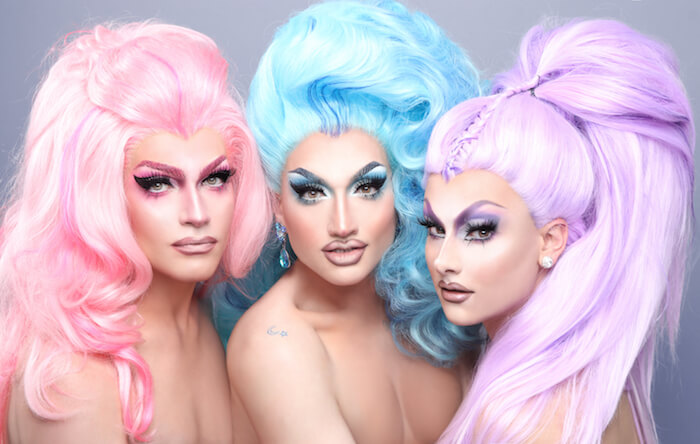 What’s the most surprising thing you’ve learned about yourself over the course of the last year?

Rosé: The most surprising thing that I’ve learned about myself through Stephanie’s Child, and our growth, is that some of the dreams that I began to let go of, because I was starting to get older, are still very alive and extremely attainable. And that the real gag is that I’m moreso, and perhaps only, capable of achieving them because of drag.

When I was a kid, I wanted nothing more than to be a pop star. And then I wanted to be on Broadway when I got a little older, and then I was like, “Wait, I love singing, but I’m an actor,” and it kind of like fell by the wayside. Now, what we’re doing is basically climbing to hopefully achieve make that kind of mark in the world as queer pop artists who are not just queer, but actually drag queens. So that is really surprising.

And in drag in general, I think the most surprising thing I’ve learned from being Rosé is how powerful I am. And it’s stuff that I’ve always had, and skills that I’ve always known. But it’s amazing how you make one choice that’s so tempting your whole life, and it releases and uplifts all the things you’ve wanted. Drag has exposed my superpowers, basically. So that’s been a huge surprise. Because if I’d known I would be the case, I would have done it years ago. [laughs]

And, you know, we’ve traveled now, and we’ve done some of these Pride gigs where I think we’ve gained a lot of confidence and a lot of perception of who we are, even more so than we had before. And I think that the dynamic of the group is just growing and growing in such an amazing way, that the hosting, and just how we’re going to feel comfortable onstage, I just think it’s really going to shine through.

And I think it’s going to be our best concert yet.