Over the last six years, 20-year-old musician Elle Watson has been channeling her thoughts into wordplay and putting these words to music. Last year’s “Phantom” gave us a first glimpse at the distinctive results of this process; introspective lyrics, ambient production, and Watson’s beautifully emotive voice all attracted attention from new fans online. She recently followed up this momentum with “Glued,” a hypnotic, Clams Casino-produced track dedicated to a lover who just can’t seem to leave.

The accompanying video, directed by Haris Nukem, brings the song’s sensory metaphors to life. The main scene sees Watson laying in a sea of bodies, but this image is frequently interrupted by shots of hands, tentacles, and mouths exploring paint-soaked flesh; inspired by Greek tableaux, Watson says the underlying idea behind the visual was to reinforce the commonalities of the human experience.

It’s unsurprising that these ideas are coming from a musician who, in her own words, loves to write and feels things deeply; “Glued” is proof that, when she does vomit these feelings onto paper, the results can be magical. In celebration of the song’s release, we caught up with Watson to talk catharsis, The Cure, and the pressures of growing up in the age of social media. 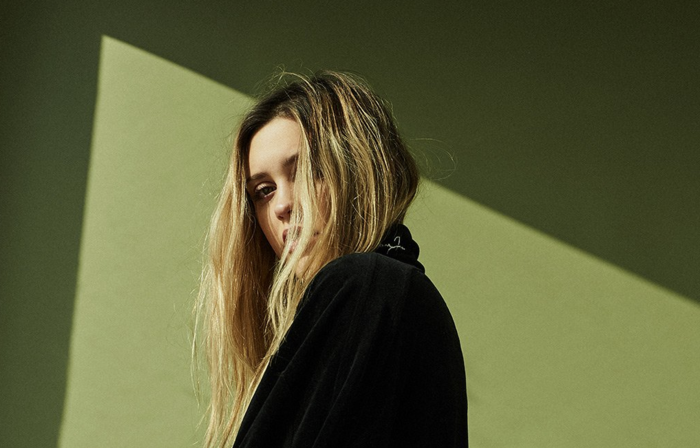 “Glued” is produced by Clams Casino. How did that partnership come about?

I’ve always loved Clams’ production. I was aware of him for quite some time before we met, as I’m a huge hip-hop fan. We were put in touch through a mutual friend and had a few days in the studio when he was in London but, interestingly, “Glued” came about after the session when he was back in the States and we were sending ideas through strings of emails. He’s incredibly talented, and it’s always a treat to work with someone you look up to.

Tell us about the story behind the lyrics – how personal are they to you?

Sometimes when I get an inkling of an idea for a song through personal experience, I multiply it by 100 and vomit it onto a page. This was one of those times. It’s written as an inner dialogue, one you might go through as you start to feel pressure from someone. I know that I wrote this when I wasn’t able to make too much sense of my own emotions, so I guess it conveys the sense of confinement I felt in my mind at that time.

The video is really distinctive, too – how did the idea for that come about?

It came about very organically between director Haris Nukem, myself, and the rest of the team. It was a group effort. The idea for the sea of bodies was originally inspired by Greek tableaux, and the bodies are a physical representation of that pressurized feeling the song describes. However, we also wanted the underlying message that we are all innately the same. We wanted to reinforce that humans go through similar things – although it can sometimes be hard to see that when you’re so consumed by your own thoughts.

What does a regular day look like for you?

I’m not sure I’ve had a regular day for quite some time now! If I’m inspired, I write music. However, I crave structure – if there isn’t any I begin to crumble and doubt myself, so my creativity takes a knock when that’s the case. In the space I’m in right now, I find it incredibly hard to write where I live. It makes me feel like I’m stepping on my own toes. I can’t describe it – I put too much pressure on myself. However, I make sure I keep writing in general to keep myself inspired because I want to, not because I have to. I’ve been writing a lot of prose recently.

Your Twitter bio is literally: “I like to write.” When did you first start putting those words to music?

The songwriting started at around 14 when I got tired of singing other people’s songs; it was more of a task to relate to someone else’s feelings in their lyrics than it was to write my own. However, to this day I’ve never written lyrics before writing. I write prose and poetry in my spare time but, instead of transferring the poems directly into songs, I tend to use them as inspiration or a point of reference when I am ready to write lyrics.

You’ve taken breaks from social media while working in the past. Does that help, for you to get into your own little bubble?

Definitely, you can get caught up in trying to perfect your own reflection. I tend to try to avoid Instagram when I create because there’s so much that can throw me off-guard. I can’t seem to escape those bubbly beauty videos with the heavy makeup that looks like face-paint, but I guess that’s our generation. Social media presence is something so ‘important’ in the modern world, and I think sometimes it stifles me; it’s so easy to get distracted by something that doesn’t mean anything.

There tends to be an element of darkness in your lyrics. Do you find writing cathartic?

I would say that I feel things deeply. I always have and, as I’ve gotten older, the freedom to spill thoughts onto a page has been rewarding. I’m careful though, as it can drag me into a vicious cycle. Once you feel the reward and know you’re being productive, sometimes it’s easy to read too much into things – I’ve gotten myself into situations where I’ve struggled to know how I really feel, or how much I’m exaggerating my emotions for the sake of getting a good line. It can be exhausting.

What were the tracks or the artists that really resonated with you as you were growing up?

Definitely a mixed bag; everyone from Björk, to The Cure, to D’Angelo. I found that Robert Smith’s lyrics flipped a switch in me, particularly in “Lullaby” – I loved the way he used the metaphor of the “spiderman” to portray his inner thoughts. Also that line: “Eaten by a thousand million shivering furry holes” makes you feel incredibly uncomfortable, yet it encourages you to keep listening. The skill needed to create that balance, that’s something I dream of possessing.

You’ve been playing some live shows too. Any memorable moments so far?

Our sound broke once, and that was terrifying. In terms of memorable experiences, it’s really weird, humbling, and fantastic to see people you don’t recognize singing along – I’m not sure if I’ll ever get used to that!

Can you tell us anything about what you’re working on at the moment?

I just shot a live acoustic video for “Glued” and I’m leading up to an EP which will be out early next year. I’m also playing my headline show on January 31 at Camden Assembly!