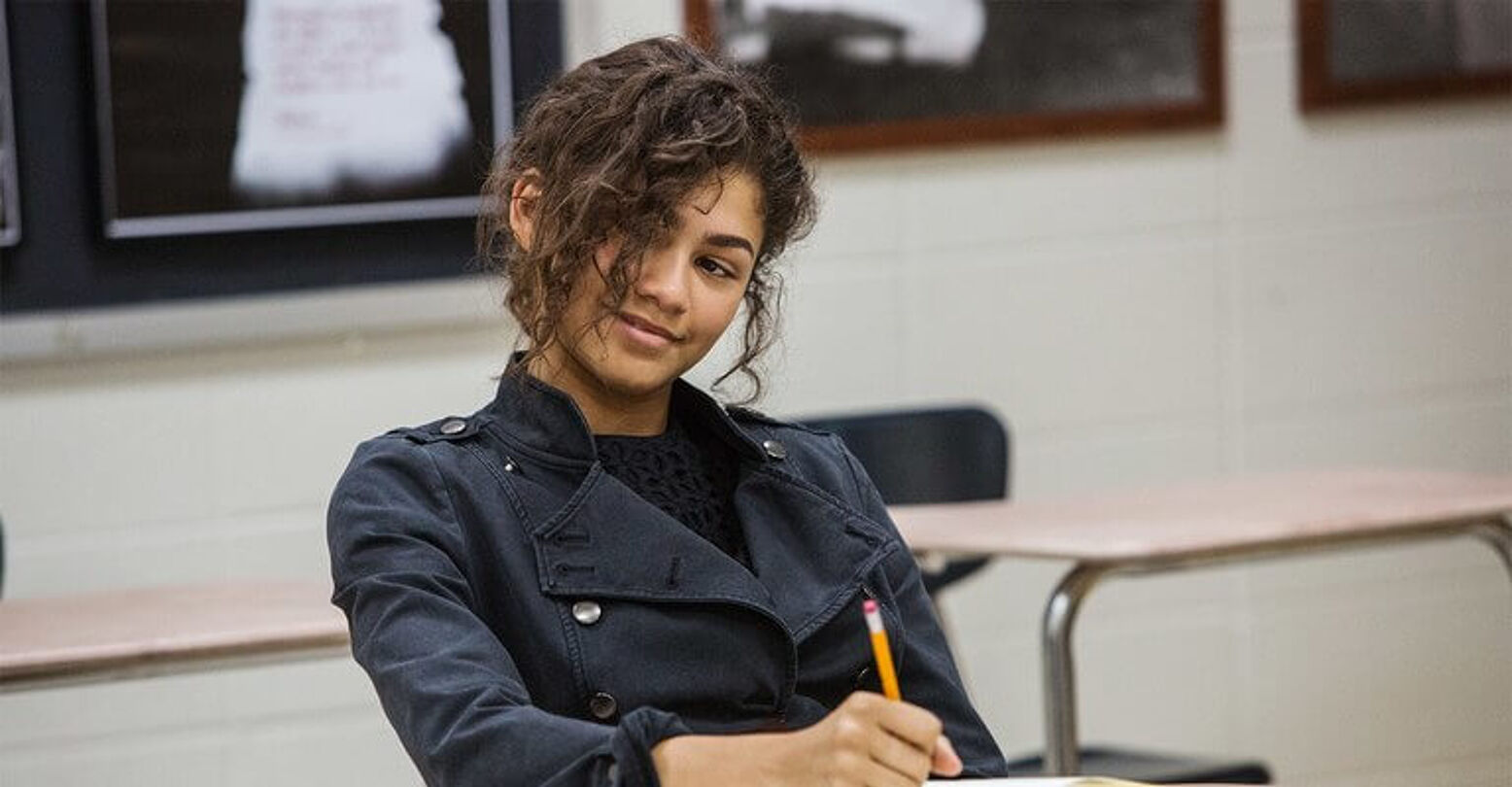 Earlier today, new paparazzi photos were leaked from the set of Spider-Man: Far From Home, revealing Zendaya and Tom Holland carrying luggage in Venice, Italy. Obviously, as Uncle Ben once told his fledgling superhero nephew, “with great power comes great responsibility.” Well, considering Zendaya looks like the face of a unisex “Gay and Tired” Gap clothing line in these new photos, it seems responsibility is certainly weighing on her. While we don’t know much about the upcoming Spider-Man sequel, we do have a new series of paparazzi photos to cull hints from. So, here’s everything we can infer about Far From Home based on these photos.

The 22-year old actress played Michelle “MJ” Jones in the first installment of the new Spider-Man movies, so we know Zendaya is set to return as this classic character. However, we don’t know much about the Marvel Cinematic Universe’s new version of MJ, which was previously played by Kirsten Dunst in the early aughts.

Here’s what we do know: MJ is a student at Peter Parker’s school, Midtown School of Science and Technology, and she seems pretty queer, at least aesthetically. Sure, the MCU hasn’t given us any real reason to believe that MJ has a broader sexuality than she did in the 2000s—but I’m only gay and human, which means theorizing about female characters being gay is my cross to bear. So, while MJ’s queerness isn’t overt, it’s surely implicit.

For example, in the first movie, Spider-Man: Homecoming, Jones was an introvert and a bit of a social outcast—which are, like, top ranking traits of queer girls in high school, next to snark and the willingness to mock everyone around her, which MJ also does. Plus, Zendaya’s character is the captain of the Academic Decathlon team. In 2004, that title may have led MJ to commit “social suicide,” but times have changed. Being smart rocks, and the one trait that all queer women universally share is “being right.” All we want is to date girls and be right all the time—and in order to be right all the time, we need to acquire knowledge. MJ is obviously priming herself to be the smartest girl in school so she can drop knowledge on her oppressors and patriarchal upholders by sucking up facts like a gay vacuum—which brings me to the pictures. 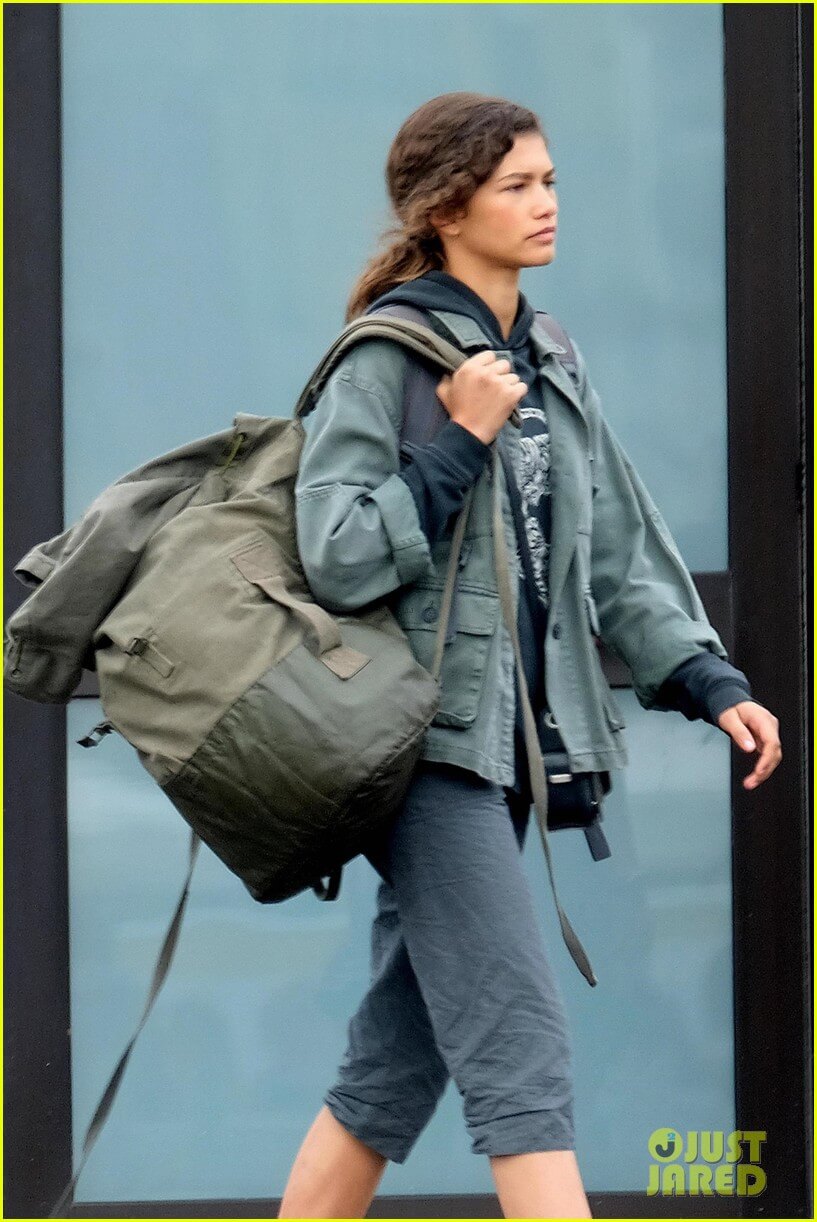 Today, Zendaya was photographed in Venice wearing a Lesbian Utility Jacket, which means her character is likely a Storage Lesbian. There are tons of factions of lesbianism, and none of us can really be stuffed into any one box (haha, box). But there are caucuses—one of which is the Storage Lesbians. A Storage Lesbian is the pragmatic kind of gay—she’s a gender-bending, masc-leaning woman who loves a fixer-upper and can be found any Sunday afternoon policing the aisles of The Container Store. There’s nary a table she can’t fix, a frame she can’t hang, or a chair she can’t build from scratch. She enjoys light carpentry as a hobby, which means she’s good with her hands in more than one way (wink wink). She’s practical, so a bitch needs pockets.

MJ’s utility jacket is dripping with pockets—and what’s in them? Screwdrivers, just in case? A tape measure? A miniature level? A Swiss Army knife? Either way, MJ is going to be ready for any hurdle that comes her way, and while it may be Peter Parker’s job to be the Great Protector, it’s certainly MJ’s job to be the Great Protractor. Look at this bitch! You know she’s got a protractor somewhere on her person. Storage Lesbians, especially ones with dozens of nebulous pockets, don’t just leave the house without a travel protractor—especially on a summer vacation across Europe, which is really the only plot point that’s been confirmed about Far From Home. Grow up.

Then there’s the backpack, for larger storage. People only use backpacks like this for a few reasons: One: Backpacking across Europe because “I’m an artist, DAD!” Two: Backpacking across Europe because “I don’t know who I am, and you’re not my real mom, STEPHANIE!” And finally: Secrets. This tactical military backpack is clearly spilling over with MJ’s secrets—maybe about her sexuality, maybe about her real purpose in Spider-Man: Far From Home. Is she carrying a sleeping bag? Does she have tools? Is she going to save Peter’s life by MacGyvering a Carabiner, a bungee cord, and Just A Strong Feeling into a homing device? She’s on to something. 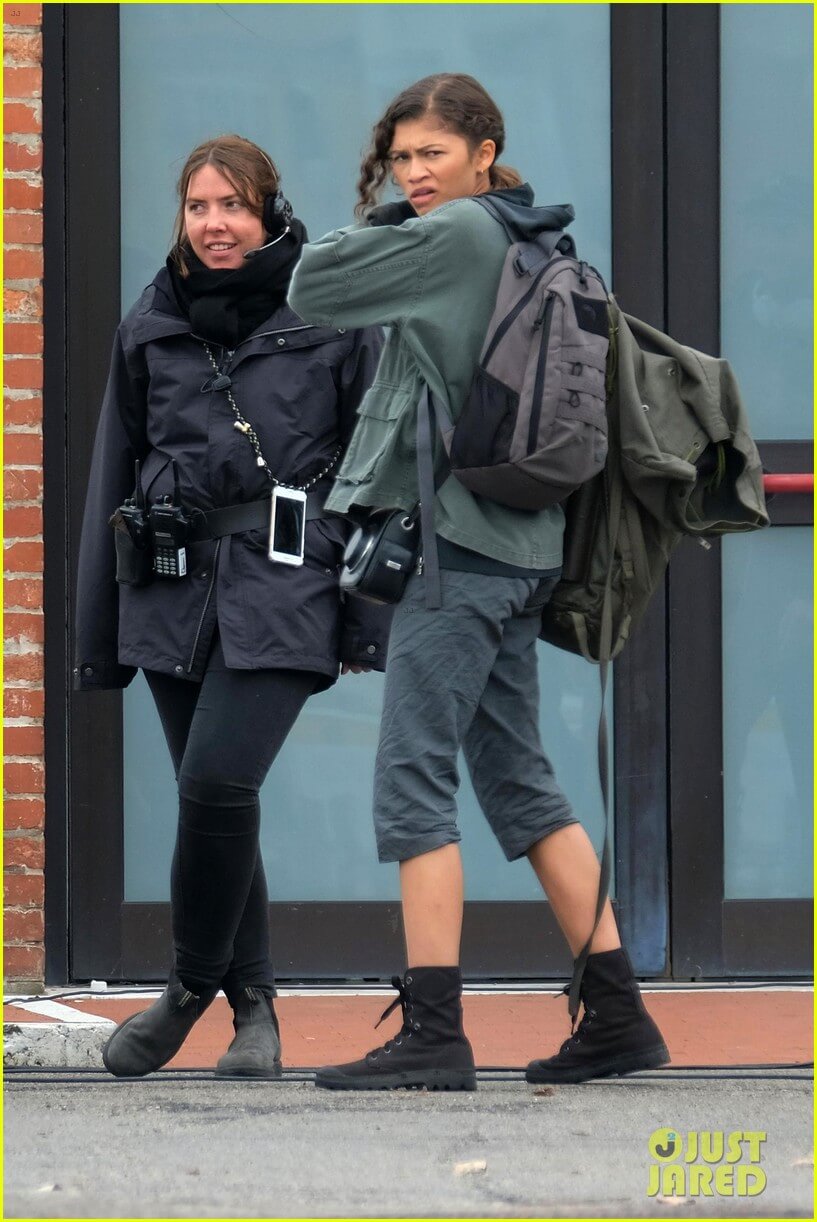 From another angle, we can see that Zendaya’s actually carrying a second smaller backpack, as well as a camera, which I can only assume means she’s the designated Instagrammer for the group’s voyage. Also pictured are Peter (Holland), Flash (Tony Revolori), and Ned (Jacob Batalon)—and men can’t be trusted to take group photos.

If you’ve ever asked a man to take a photo of your group, then you know they’re guilty of committing the 8th deadly sin: taking ONE photo, and saying “have a good night.” Motherfucker, we need angles, we need options, we need “do a goofy one!” Just another reason men are rapidly losing relevance in 2018. So, we know Zendaya is good with her hands, probably going to build something to save the day, and is going to have a fucking fire Instagram story.

Also pictured are MJ’s lace-up combat boots and 2000s European-style capris, which are devoid of coolness, which means they are 100 percent cool in the eyes of queer women. MJ looks like she’s ready for literally anything: rowing a gondola; parachuting to certain death but surviving for months against all odds on a stormy island; climbing Everest and falling hopelessly in love with a Sherpa woman and subsequently staying behind to start a life in the Nepalese mountainscape with her new lover. You know, vacation stuff. 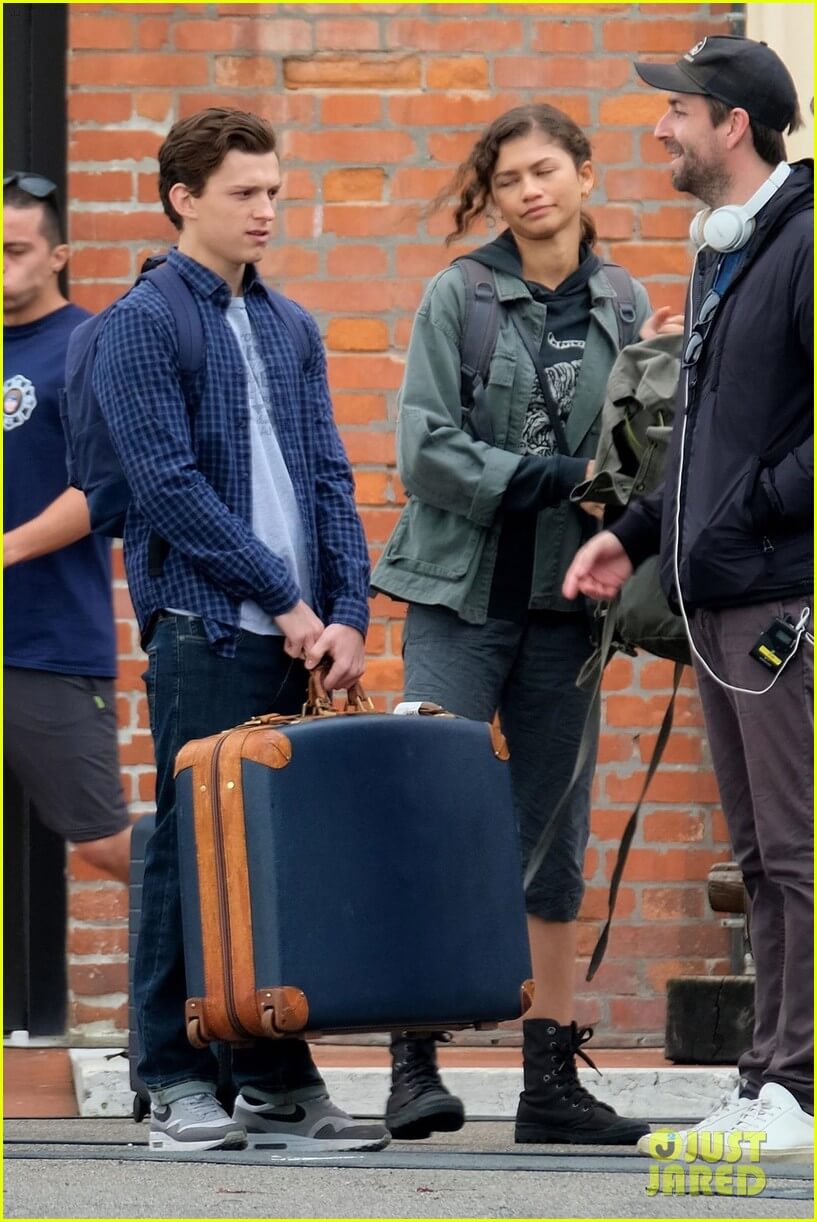 Sticking to the theme of “Gay and Tired,” here’s MJ severely rolling her eyes at Peter—or more broadly, at the arduous labor of interacting with men. She seems prepared, over-prepared even, and then this guy shows up with an impractically chic suitcase, and what, a breezy button-up shirt? MJ is looking at Peter like, “Where are all your pockets? Where will you put your emergency mini-drone if you don’t have pockets?” Peter Parker seems more like a guy sending you a Facebook invite for his improv show this weekend than a superhero, and MJ is having none of it. Dress for the job you want, Peter, you fucking hetero-disaster. 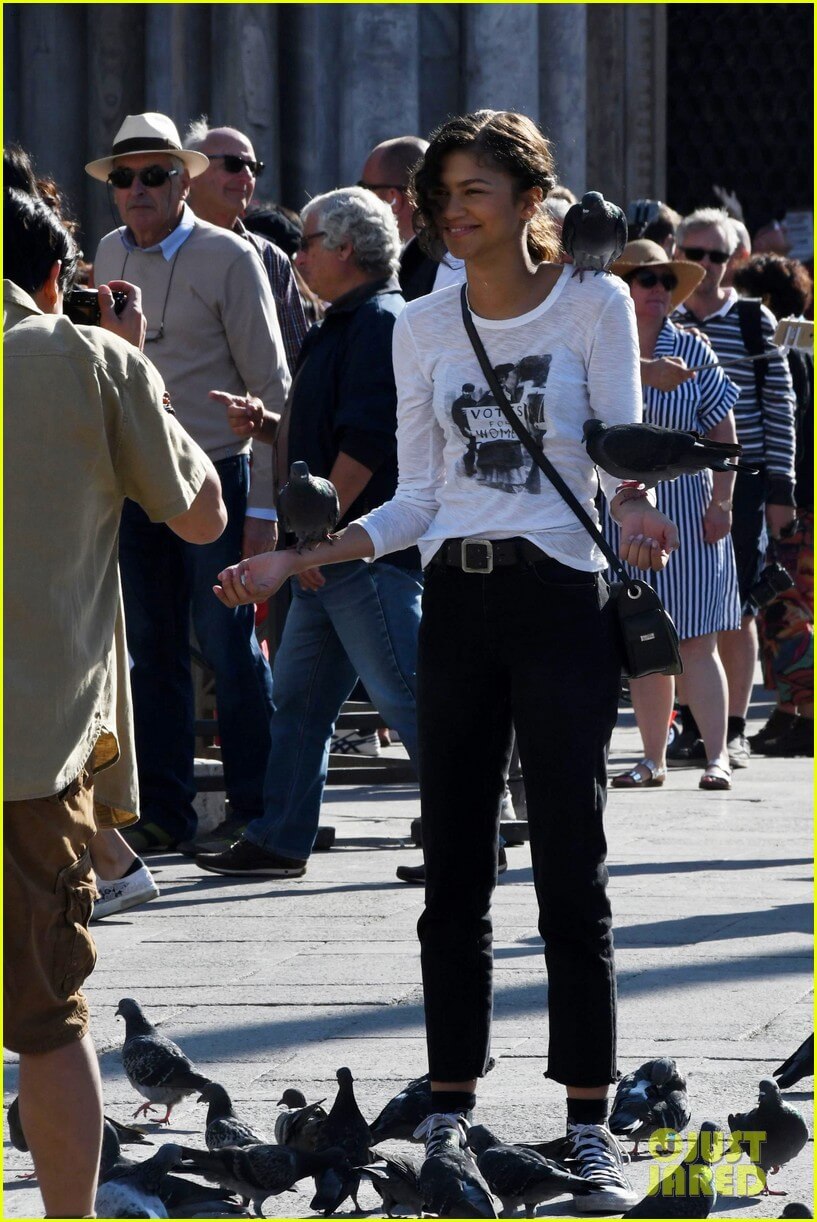 Over the weekend, Zendaya was also photographed on the movie’s set covered in pigeons—which aren’t necessarily gay, but fuck it, pigeons are gay now. Sure, queer women can be petty know-it-alls, but deep down, we have a well of empathy greater than any other human can scratch the surface of, which is why we’re often either empaths, psychics, mediums, activists, or all of the above. Here, Zendaya is photographed wearing Chuck Taylors, belted floods, and a women’s suffrage shirt—an ideal look for a weekend Tax March. She cares about people, but she also cares about animals—which is sweet, and gay.

This leads me to believe that MJ will carry the emotional weight of the entire cast, including every emotion that Peter Parker and his male cohorts were misled by the patriarchy into believing they should bury. So, as always, queer women and women of color are unfairly afflicted with steering their peers away from danger and toward a pragmatic and morally sound path. See, Peter? This is why you died in Avengers: Infinity War. Well, that and the work of a depraved intergalactic war lord.

Spider-Man: Far From Home swings into theaters July 5, 2019, and probably none of this will happen in it.