The fundamental principle that underpins team sports like soccer is one of unity, yet the World Cup and other events like it are often plagued by intolerance and discrimination against queer fans and players alike. Steps are being taken to tackle this now that FIFA has begun fining associations when their fans chant homophobic slurs. And now that players like Collin Martin are starting to publicly come out, the soccer community as a whole is slowly becoming more inclusive. However, these progressive instances still remain few and far between in a field where prejudice continues to run rampant on both a local and national level.

Part of this is due to the fact that LGBTQ representation in sports like soccer is practically invisible, overshadowed by its heterosexual characterization in the media. Enter Mario, a Swiss-German movie that tells the story of two soccer players who secretly find romance together off the pitch. At first, Mario (Max Hubacher) and Leon (Aaron Altaras) compete as rivals on the U21 team of Bern Young Boys, but after they begin spending more time together in their shared apartment, a surprise kiss leads to something more.

Openly gay director Marcel Gisler was initially reluctant to take on the material, as it was different from anything he’d done before, but the scenes shot on the pitch are just as authentic as the drama that unfolds in the locker room and beyond. Every tackle hits hard and the conviction that these gay players have for the game reinforces the notion that anyone can excel at soccer and other sports too, regardless of sexual orientation.

Sadly, the problems that the young pair face once rumors of their relationship emerge ring true as well. Mario initially draws back after Leon first kisses him, out of fear that accepting his feelings could affect his future in soccer. These worries are soon compounded when a fellow teammate tries to blackmail the pair after discovering their relationship. What started out as a sweet gay romance soon becomes fraught with tension and unease, which escalates once the club they play for hears about these rumors, too. 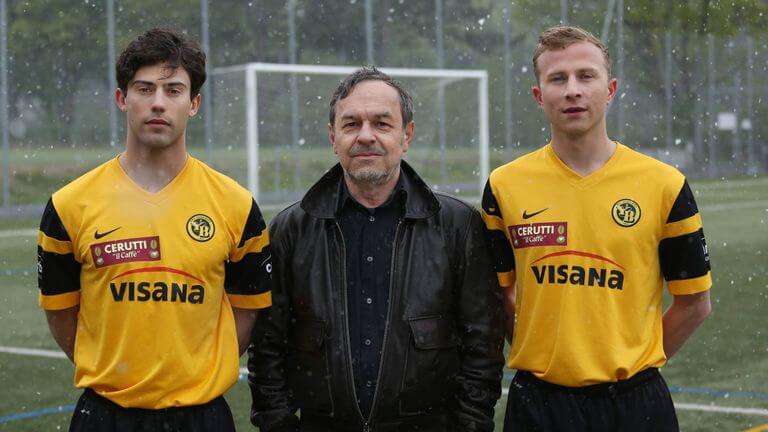 This isn’t the first time that a gay movie has explored the perils of coming out, both imagined and otherwise, but Mario doesn’t hide his sexuality out of shame like most. Instead, his worries revolve entirely around his career. Even Herr Gehrling (Andreas Matti), his agent, reminds Mario that players who wish to hit the big time can’t be associated with “drugs, sex with minors or gay stuff,” forcing him to make a painful choice between his love of soccer and his love for Leon.

Attempts to straddle this difficult path lead to denial and even fake dates with women, all to appease the unwritten rules that the club holds regarding homosexuality. In particular, an uncomfortable meeting between the two boys and the club’s bosses works perfectly as a microcosm of the homophobia that still defines contemporary professional soccer at large. Such prejudice is also reinforced throughout by homophobic teammates who tease the couple in the locker rooms.

Although this material sounds rather heavy-handed on paper, the supporting cast brings some color to the proceedings, most notably in the scene where Mario comes out to his mother. Even more importantly though, the central pair are likable from the get-go. Queer fans seeking this film out to ogle at the two leads might be disappointed to hear that the sex scenes are few and far between, but Hubacher and Altaras share a strong chemistry that carries Mario through its weaker moments.

Yes, the romance takes longer to get going than you might expect and the film as a whole could have benefited from a shorter running time. However, Mario is still an important movie, and nowhere is this more clear than in the final act where the damage of denying your true self becomes clear. Whether gay audiences relate to Mario or Leon in this scenario, closeted soccer players watching this will hopefully find the courage to now join Collin Martin and Robbie Rogers as out and proud competitors on the pitch.

Speaking to Sky Sports, Gisler explained that he made Mario primarily for people who love soccer, and in particular, the director strived “to reach an audience that’s not LGBT.” Given that Mario was deemed suitable for teenagers in its native Switzerland and yet has been rated 18 for release in the UK, it’s clear that films which help normalize gay love for straight audiences are still of vital importance. In fact, the mainstream perception of queer love in general still has a long way to go, both on and off the pitch, which is exactly why a release like Mario deserves to be celebrated in a league of its own.