Anyone who tunes in to Michael Varrati’s dishy podcast Dead for Filth with Michael Varrati – a show dedicated to all things queer and horror, where one might catch an interview with a legendary actress, a queer filmmaker, or a spooky perfumer – will find themselves smitten with the host himself. Varrati’s lively witticisms and wide bank of pop culture reference points make him the perfect guide. 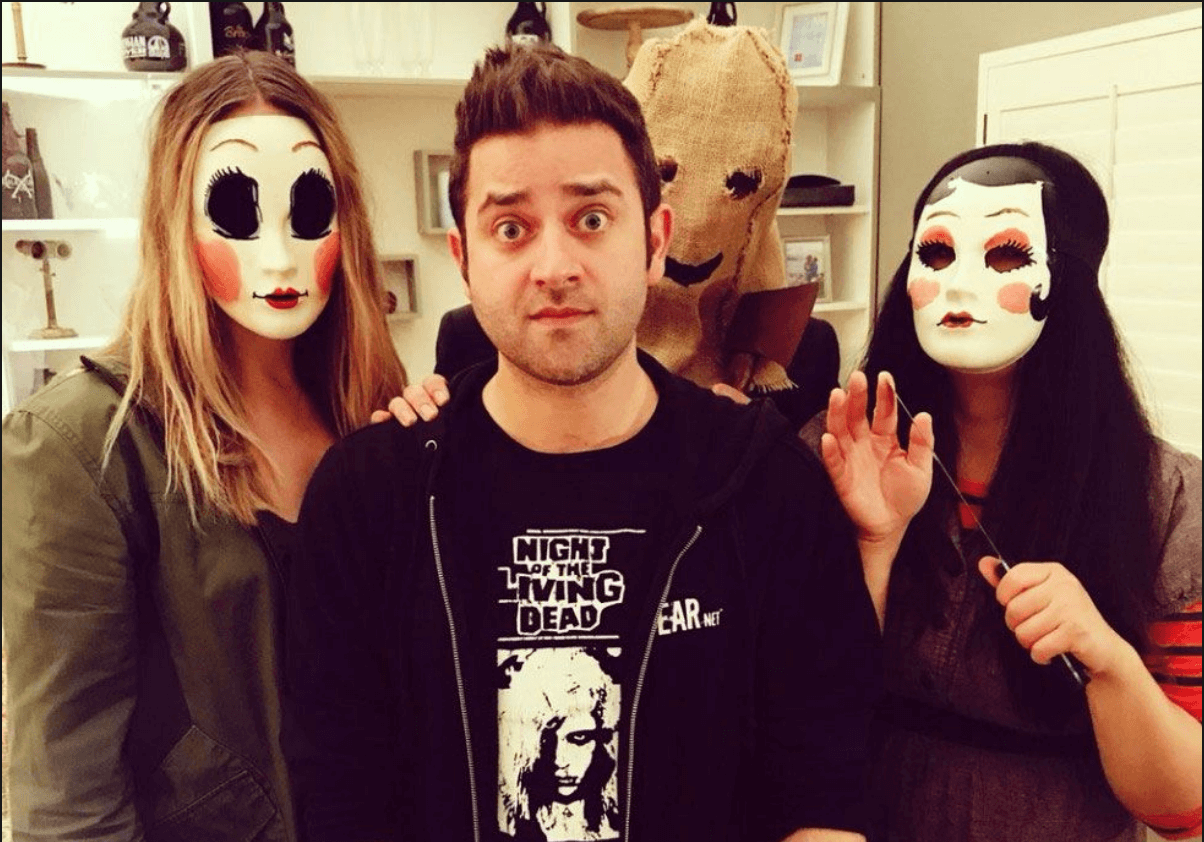 And he’s not just a super fan; he’s a creator as well, a writer of experimental horror films (Tales of Poe: Dreams); horror-comedy (The Sins of Dracula), a Montgomery Clift biopic, and, incredibly, a multitude of Christmas movies for Lifetime. (Yes, I’m serious!)

And he’s working on a musical titled Slay Gardens with horror queen Peaches Christ, and just premiered a new short, He Drinks, at the 2018 Outfest. The hardest-working man in queer horror had time to chat with me about Vegas in Space, Paul Lynde, his Virgo tendencies and more!

Oh gosh. Honestly, life itself is uncanny when you take a moment to just step back and look at everything. I swear I see weird stuff every single day, but I also kind of go looking for it, you know? I love the bizarre and unusual. I once saw someone staple a dollar bill to their arm so they didn’t lose it. I’m also fairly certain I once saw a candle light by itself. I also have witnessed an individual pass on complimentary chips and salsa at a restaurant. Can you even imagine? It’s a weird world out there.

What is in your wallet right now?

In my wallet right now, beyond the usual assortment of identification and stuff, I have punch cards for my local comic book store and pizza shop. In both cases, if I fill them up, I get a free book or slice, and honestly, what more could you want? Free grub and something to read sounds like my kind of lazy afternoon.

Alas, it’s nothing scandalous. It’s a photo of the cat who lives at a bookstore I frequent! 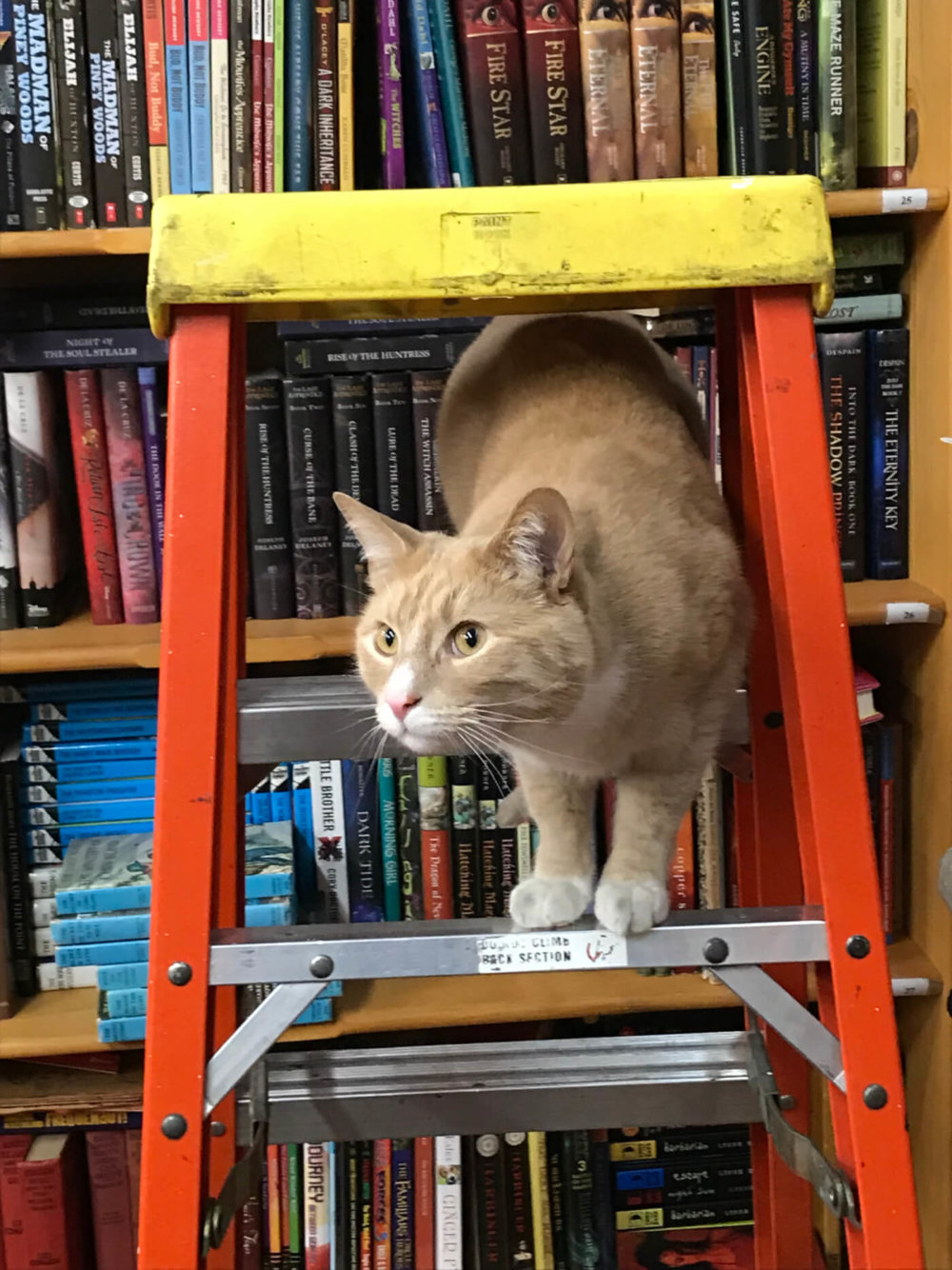 Admittedly, I don’t know as much about the zodiac as others in my life, but I know I check a few boxes regarding my sign’s traits. I’m a Virgo and I tend to be very work-oriented. I like to have many projects going at once and can be very methodical about how I organize and execute them. However, unlike the traditional definition of Virgo, I tend to leave that Type-A sensibility on the professional side. In my personal life, I’m a lot more relaxed and go with the flow. And if my closet is any indicator, probably more cluttered than I’d care to admit.

The last book I read was called Tell the Wolves I’m Home by Carol Rifka Brunt, which is a marvelous and powerful novel about a girl whose uncle succumbs to AIDS and the unlikely friendship she forms with his partner. It’s devastating and beautiful. I loved it.

The last song I listened to was “Caught Up in the Rhythm” by Slow Knights from their Cosmos album. They’ve been a secret favorite of mine for a while, and definitely worth checking out if you’re looking for a new soundscape to discover.

The last show I watched was the original Japanese version of Death Note, which I’m just now discovering for the first time. I’ve never really delved too far into the world of anime, but something about the show’s premise…a notebook that can kill whoever’s name is written in its pages…really grabbed me. It’s surprisingly psychological and tense. I am more than a little obsessed.

The last movie I watched was this Scottish flick called Calibre. It’s very tense and had me on edge the whole time. It’s best going in blind and just letting it take you on its bizarre, Hitchcockian journey.

I think the last proper meal I made was a chicken Caesar salad. I know, not very exciting. I guess if you’re looking for intrigue in my life, it’s better to look on the page than in my kitchen.

I’ve been doing a lot of writing about British film history of late, and I’m really galvanized to take a trip to London. I need to walk the same lands as Christopher Lee and Peter Cushing and live my contemporary gothic fantasy.

In my work, I’ve been incredibly lucky to cross paths with a lot of people whose work I look up to. I’ve also been grateful that so many of them have been willing to share their stories with me. One particularly significant friendship I forged was with this filmmaker, Phillip R. Ford, who made a drag movie, Vegas in Space, before there really were drag movies.

I originally saw that flick on USA Up All Night and was obsessed. Years later, I connected with Phillip, and he was just so gracious and open. His stories about San Francisco in the ’80s and the gay experience of the era. It helped give me perspective on queer history.  I eventually had the honor of co-producing an event screening of Vegas in Space for its 25th anniversary with Peaches Christ, and that felt very full circle. More so, beyond the movie, I value Phillip, his friendship, and all he’s shared.

When I’m ill I go into total isolation mode. No grandstanding, no whining, just complete cut-off from the world at large. If possible, I hide in bed and watch TV until I feel better. I rarely communicate with others during those moments, so a lot of times my friends didn’t even know I’m sick. I can see how that’s not always the best plan, but the solitude is sort of essential to feeling better for me, I think. When I feel ready to see others, I know I’m on the other side of it.

I think I’m most inspired right now by people who are continuing to keep up the fight. Individuals who resist the status quo to make sure that everyone is represented fairly. Injustice will always be part of humanity’s fabric, but the people who raise their voices on behalf of those whose voices could use amplifying. They inspire me to continue forward with my own work sharing queer stories and experiences. Is that cheesy? Maybe, but it’s true.

For a lighter answer, I’m currently obsessed with cozy mysteries. I read stacks and stacks of them. I love the idea of a quaint town with a barista or baker solving crimes with their cat. In this tumultuous world, those books are my happy place.

The state of the world and politics is upsetting on a near constant basis. There’s not enough room in one article to express my dismay on behalf of endangered children, minorities, women, LGBTQ+ people, etc. It sometimes feels like an uphill battle, being but one person in this chaotic world. But, we also need to remember that change begins with us. We need to help each other when we can. Spread love when we can. We have to. The alternative is unbearable.

I had a dream that I was going to a concert, but was waiting on a friend…and the band started playing before they arrived. And then I got dismayed because I didn’t want them to miss anything cool. So then I was running around in a blind panic, not even enjoying it myself. Even in dreams, I guess I like people to get a full entertainment experience.

The great thing about doing what I do, especially with my podcast, is I’ve had the opportunity to hear and preserve the stories of many queer individuals, both contemporary and those who came before. In that way, a lot of those people are my queer ancestors, because their stories helped shape my own. The mighty Doris Fish in San Francisco utilizing genre as a means of subversion, the stories of Hibiscus battling the status quo, James Whale injecting queerness into Frankenstein. It’s all part of me and informed my own queerness.

Well, as everyone knows, I love genre cinema. So I just would love to keep making horror movies with social impact. Beyond that, I have not so secretly always wanted to make a biopic about Paul Lynde. He’s just so fascinating to me. He’s the gay icon of a Hollywood era who never got to tell the world directly that he was gay. Can you imagine the internal struggle? I feel for him.

What great timing for this question! A short film that I wrote and directed, He Drinks, is having its world premiere at Outfest this weekend, so I’m going to be reuniting with the marvelous cast and crew to celebrate that, as well as attend some of the other great screenings playing at the festival. I’m really excited and honored to be part of such a prestigious event, and honestly am just hoping people like our little labor of love.