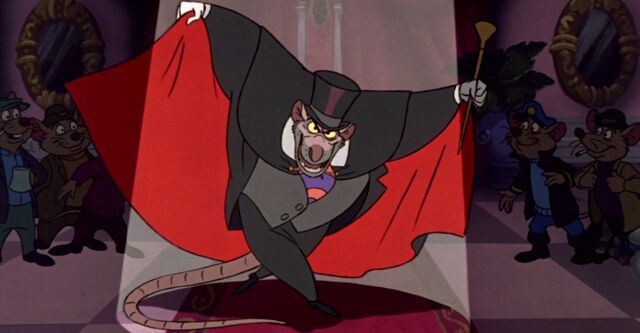 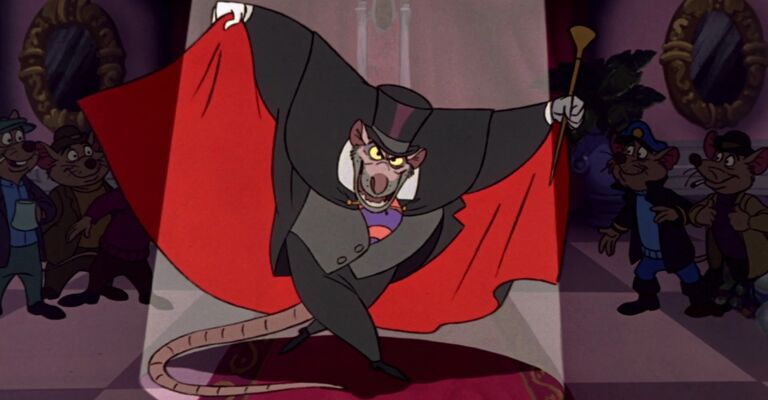 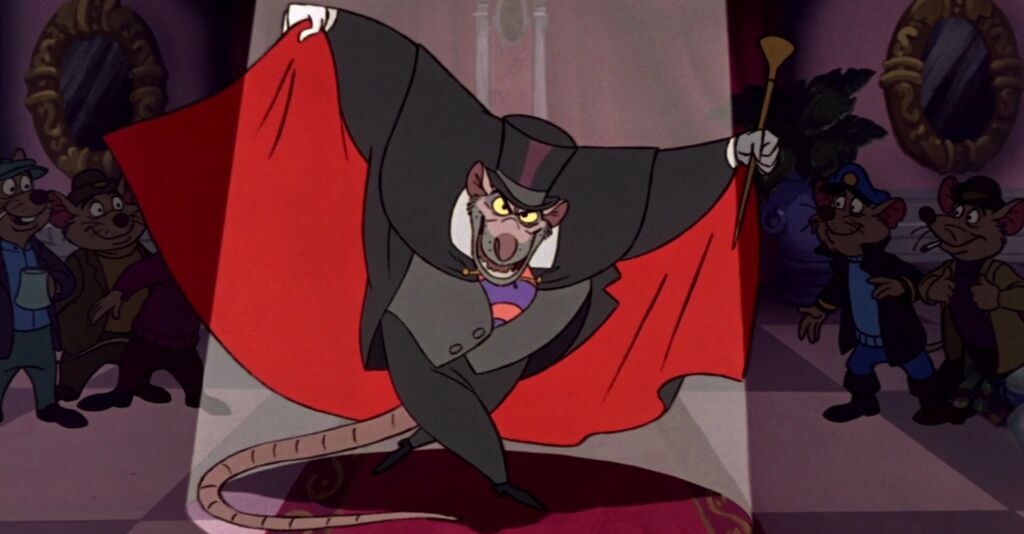 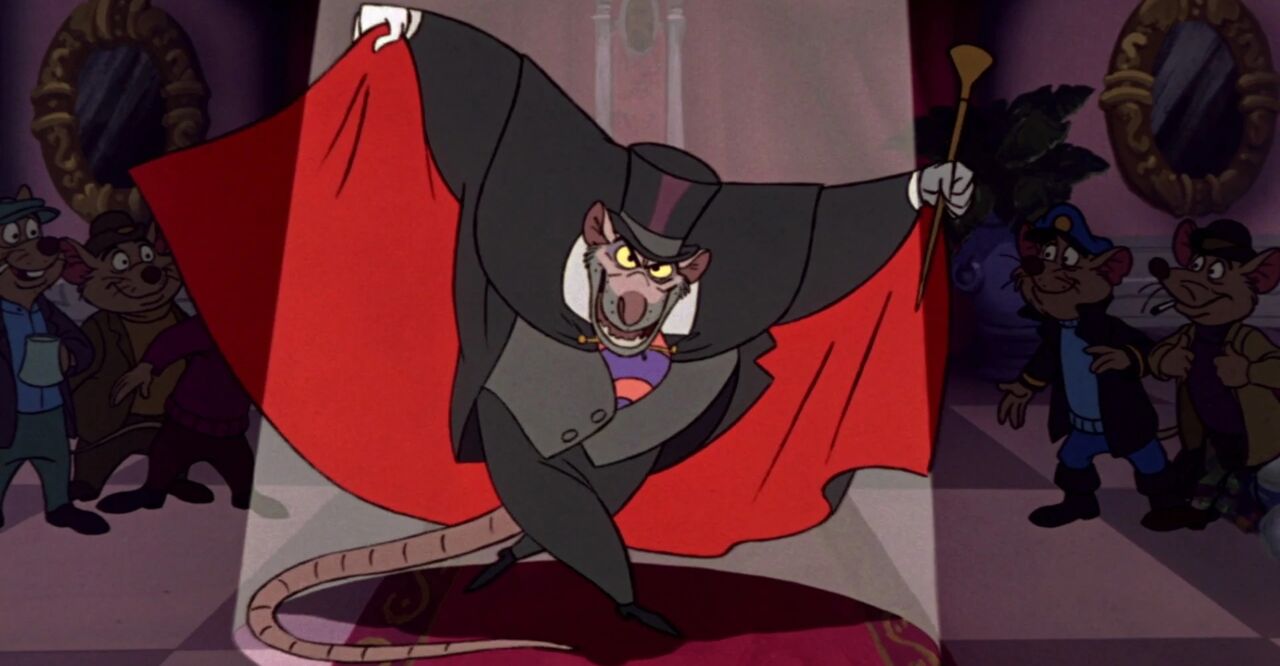 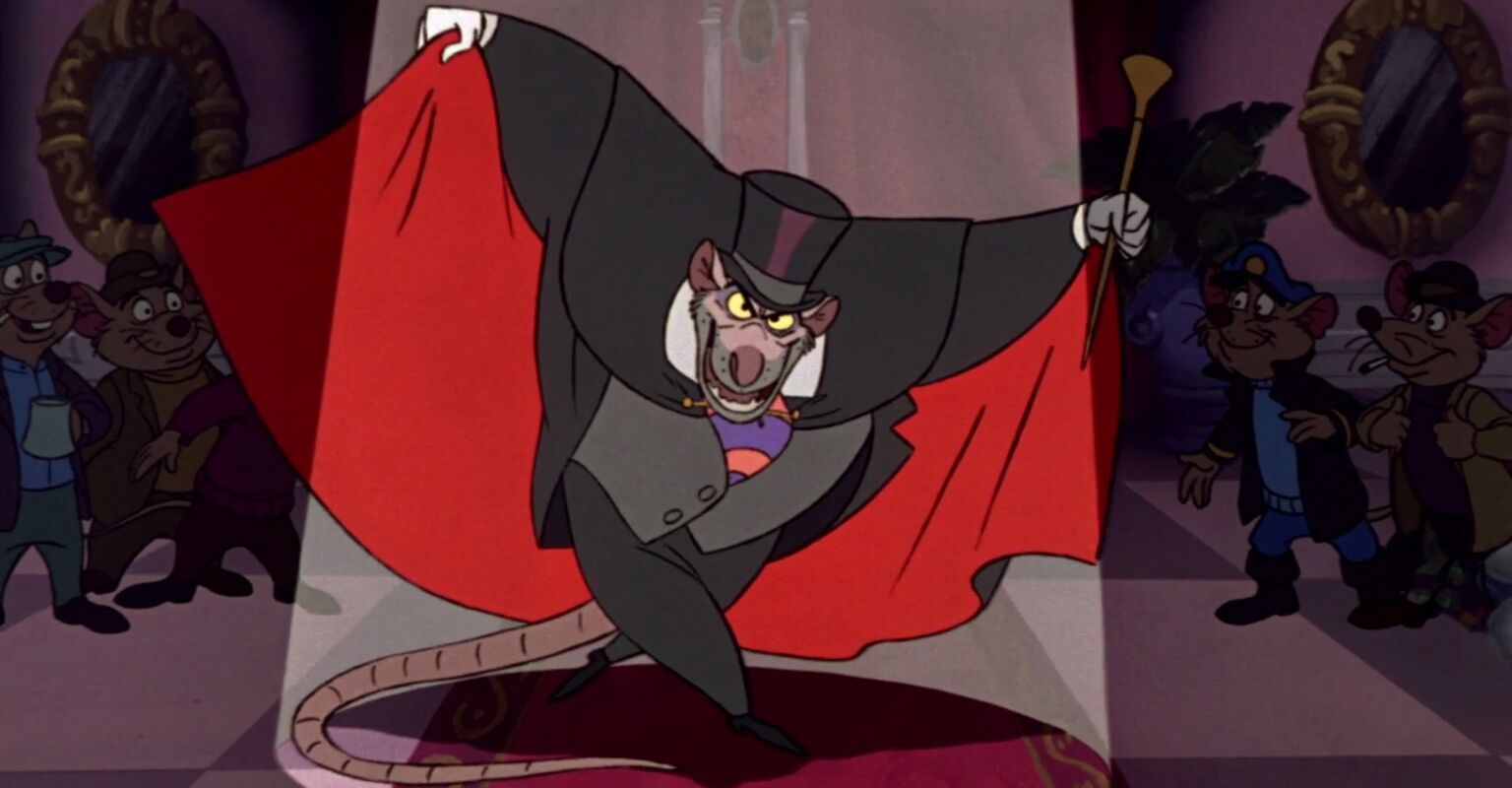 Back in 1986, after the death of Walt and before the impending reign of Michael Eisner, the Disney empire was floundering. Things were so bad—especially after the release of mega-flop The Black Cauldron in 1985—that the company even toyed with the idea of axing the animation department altogether to focus on live action.

But one film changed the course of history forever, a modest hit that revived the public interest in Disney animation and paved the way for the Disney Renaissance to follow. It was a little film called The Great Mouse Detective, adapted from Eve Titus’s children’s book series “Basil of Baker Street.” But there’s something about the movie you might not have picked up on the first watch. It’s subtle a but fascinating detail, and it’s something I think about all the time.

The Great Mouse Detective follows the exploits of Basil of Baker Street, a Sherlock Holmes knockoff who happens to be a mouse and lives beneath the real Sherlock’s Baker Street flat. Not only that, but Basil has his own criminal genius counterpart to contend with. Instead of the great criminal mind Moriarty who dominates some of the best Arthur Conan Doyle stories, Basil squares off against Ratigan, the “Napoleon of crime” who rules his underworld kingdom with an iron fist, and the help of a large cat named Felicia.

But that’s not the only thing that’s interesting about Ratigan. The character comes with a tantalizing detail: though he’s a large, dandified villain who is illustrated to look like a rat, Ratigan identifies as a mouse.

At first glance, it just seems like a silly detail, something to perhaps show the delusion of a character who sees himself in broad, superlative terms. But the way the film plays with this is telling. Not only is the film a little bit coy about Ratigan’s identification as a mouse, critics and viewers were (and remain) equally bizarre in trying to describe the politics of Ratigan’s identification.

Per the contemporary New York Times review of the film, Ratigan is a rat who “prefers to think of himself as an upscale mouse.”

Ratigan is trans-coded, and that’s exactly how contemporary reviewers treated him.

Indeed, “prefer” and “pretend” are words that come up a lot. As one critic put it, “he’s a rat pretending to be a mouse”

Some viewers describe Ratigan as a rat who is in denial about his identity, which makes a bit more sense, I guess. But if Ratigan “pretending” to be a mouse, literally no one is buying it.

A review from Time Out goes even further, describing him as “a Napoleon of crime with the wardrobe and neurotic wit of a Nineties dandy, and the absolute conviction that his rat-like form is one of nature’s mistakes.”

“Nature’s mistakes” feels more than a little loaded: and if you’re picking up what I’m putting down, you already know what I’m about to say. Ratigan is trans-coded, and that’s exactly how contemporary reviewers treated him. It doesn’t hurt, either, that Ratigan is played by bisexual icon Vincent Price, known for his flamboyant, often queer-coded villains. Price relished the role to play someone this villainous. And make no mistake, Ratigan is a top-notch villain. He’s not like some of the other Disney villains you meet who never actually kill or do harm to another living creature. Almost as soon as we meet Ratigan, he kills one of his henchmen for…misgendering him.

“Only when someone makes the mistake of referring to him as a rat—which is what he looks like, though he insists on being perceived as an enormous mouse—does he lose his temper,” wrote a recent critic for the AV Club.

But does Ratigan insist on being perceived as a mouse, or is he simply sick of being misgendered all day? However you feel about Ratigan, you have to admit that he’s in a pretty weird position. He’s the one solitary figure in the entire film who looks physically different: because there are no rats in this world. There are frogs, turtles, bats, and mice, but surprisingly, zero rats. So is Ratigan in denial about his identity, or does he simply not see any evidence of his own existence in the world around him?

That is the extremely trans question, I suppose, at the center of the Ratigan conversation.

There’s even a bit of transness in the way Ratigan was animated. At first, Glen Keane and the other Disney animators thought about illustrating Ratigan in a different mode altogether, as thin and sickly-looking, but after Price’s casting, and after Keane came upon a source photo from 1890s England that showed a natty railroad worker looking like “a well-dressed sewer rat,” they had to go back to the drawing board.

The result is Ratigan the futch wonder: he’s big-bodied, light on his feet, elegant, debonair, and utterly self-assured. But there’s another trans twist in store for him, one that’s utterly characteristic of the late 80s and early 90s, when films like Dressed to Kill and The Crying Game were mainstream fare.

During the film’s climactic chase inside the Big Ben clock tower, Ratigan turns “feral,” as if to reveal what the animators saw as his true “ratlike” nature.

In 1992, an LA Times reviewer took a second look at the film, deciding that Ratigan’s “clocky” moment counted as inspiration for Beauty and the Beast. “Although he’s a much broader character,” he wrote, “the bulky Ratigan is clearly an ancestor of Beast, especially when he sheds his suave veneer and becomes a vicious monster during the final confrontation.”

It’s gender essentialism at work, plain and simple. Or should I say, rodent essentialism? Either way, Ratigan never really had a chance. Had he had the fortune to be born in the world of Don Bluth’s Rats of NIMH, maybe things would have been different. Had he been conceived of or illustrated by a team that understood what transness was, perhaps his fate wouldn’t have been so bleak.

As it was, Disney would have to wait a few years to get their first trans hero—along with one of the most iconic trans villains in film history—with 1989’s The Little Mermaid.

Disney wouldn’t foray into the “trans trickster” plot again for quite some time—by the early 90s, that was the job of live-action films on the level of Ace Ventura: Pet Detective, Boys Don’t Cry, Silence of the Lambs, and The Crying Game. But if you’ve ever seen The Great Mouse Detective, you probably have a strong memory of Ratigan: not as a deceiver, not as a figure in denial, but as one of the finest screen villains in modern history. ♦