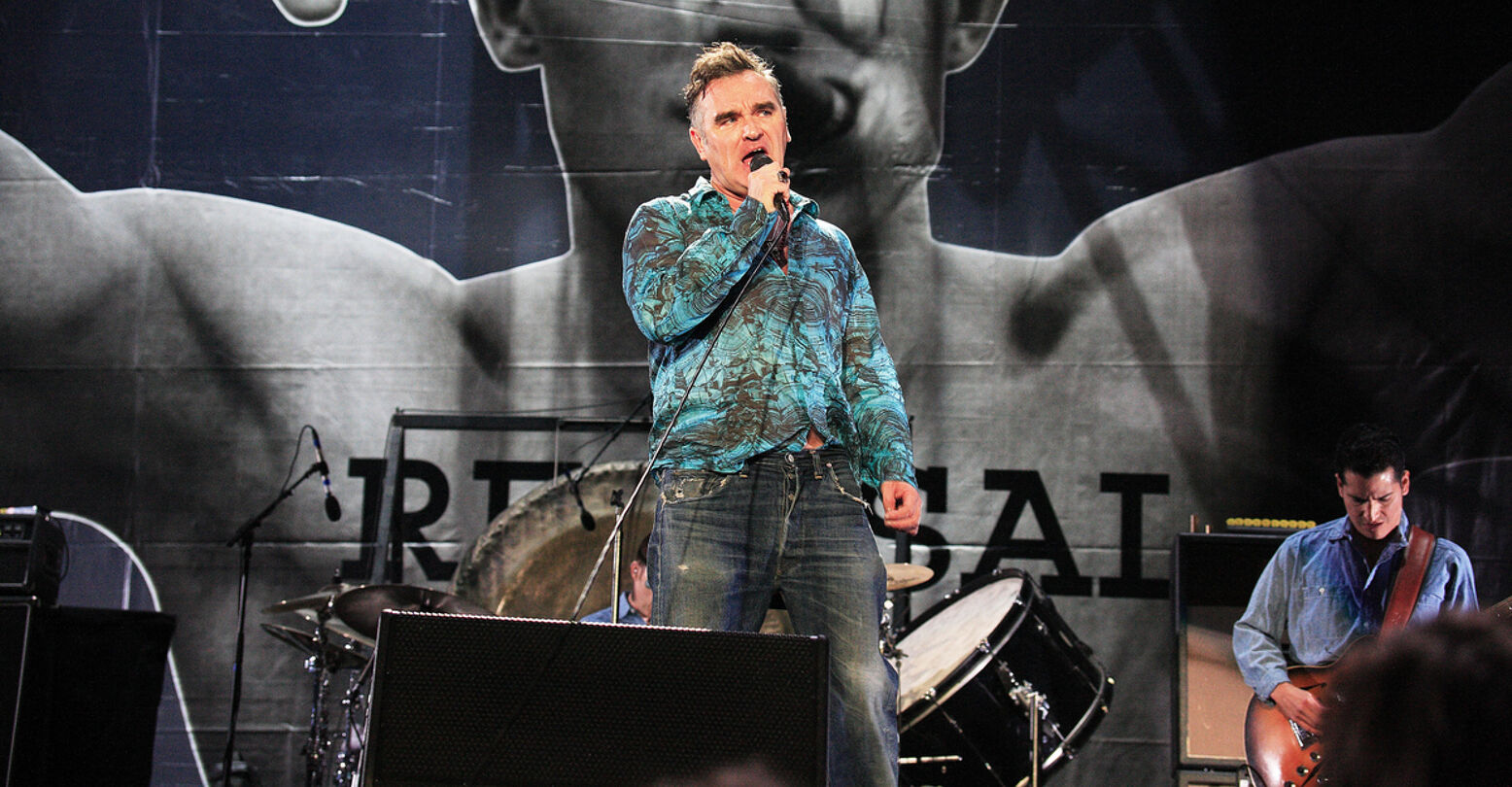 Earlier this month, the city of Los Angeles gave Morrissey his own day. November 10, Mayor Eric Garcetti announced, would forever be in recognition of the musician who famously fronted Manchester-based band The Smiths before going on to cultivate a successful decades-long solo career for himself.

“Los Angeles embraces individuality, compassion, and creativity, and Morrissey expresses those values in a way that moves Angelenos of all ages,” Mayor Garcetti said in a statement. “Morrissey Day celebrates an artist whose music has captivated and inspired generations of people who may not always fit inbecause they were born to stand out.”

That night, I was among a sold out crowd at the Hollywood Bowl, one of two nights that were not only dedicated to the now 58-year-old musician, but that had also created an exclusive all-vegetarian menu throughout the venue. (Morrissey is a diehard vegan, who dedicates an entire song during his live shows to highlighting the terrors of slaughterhouses, meat markets, and farms around the world. The violent visuals are unavoidable, which is kind of the point.)

The kinds of “values” that Morrissey holds, and that the city of Los Angeles is now celebrating annually, are what make him a little difficult to stan forespecially as of late. While he’s spent his entire career thwarting off gay rumors (instead professing to be a “humasexual,” but also celibate), he’s also been quite vocally anti-women, expressing disparaging thoughts about not only women he knew personally, but Prime Minister Theresa May, Fergie, The Duchess of York, and Madonna, the latter he referred to as “closer to organized prostitution than anything else” in a recent interview with the Sunday Times. 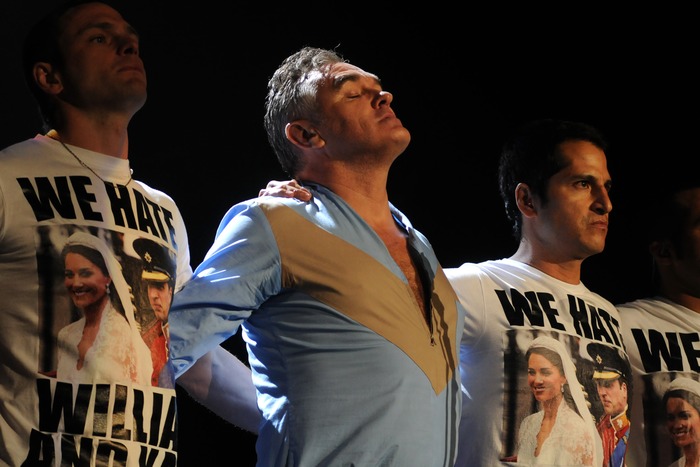 It was that interview that has stirred a resurgence of Morrissey bashing as of late, some that had been latent between his last album in 2014 up until his newly released LP, Low In High School. When asked about current topics such as sexual harassment, specifically as it relates to power players in Hollywood, he remarked that he found Anthony Rapp’s statements against Kevin Spacey to be “not very credible.”

“One wonders where the boy’s parents were,” Morrissey told Der Spiegelmagazine. “One wonders if the boy did not know what would happen. I do not know about you, but in my youth I have never been in situations like this. Never. I was always aware of what could happen. When you are in somebody’s bedroom, you have to be aware of where that can lead to. That’s why it does not sound very credible to me.”

He later told The Sunday Times, “You must be careful as far as ‘sexual harassment’ is concerned because often it can be just a pathetic attempt at courtship. I’m sure it’s horrific, but we have to keep everything in proportion. Do you not agree? I have never been sexually harassed, I might add. I hate rape. I hate attacks. I hate sexual situations that are forced on someone. But in many cases one looks at the circumstances and thinks that the person who is considered a victim is merely disappointed.”

Yet at the show at the Bowl on Morrissey Day, four different fans jumped on the stage, effectively flinging themselves at the singer and grabbing at his torso until security guards rushed to pluck them off and place them back into the crowd. This kind of grabby ownership is one that many Moz fans feel entitled to, especially as many of them have been long-dedicated stans for an artist who is somewhat problematic. And it’s not just his distancing himself from the queer community, nor the anti-feminist feelings he espouses. He’s also somewhat of a cultural appropriator. Yet somehow, he gets away with it and is actively embraced by the Mexican-American community he, an Irish man who grew up in Manchester, England, is not a part of.

Morrissey’s Mexican fanbase are said to be drawn to his ranchero style; his consistently sorrowful croons about the loss of love lingering, something he almost seems to lavish in despite his public declarations of having never been on a “proper date.” But the borrowing of a style from a country not his own has been repeated throughout his career, and it’s questionable whether his efforts are sincere or some kind of pandering. His 1999 album and tour, ¡Oye, Estéban!, had him remarking from stage “I wish I was born Mexican, but it’s too late for that now.”

And on his new tour, almost two decades later, Morrissey opens the show with his face painted as a calavera skull. It would seem that in a time when cultural appropriation is being called more than ever before (and rightfully so), Stephen Patrick Morrissey is exalted instead of exiled. 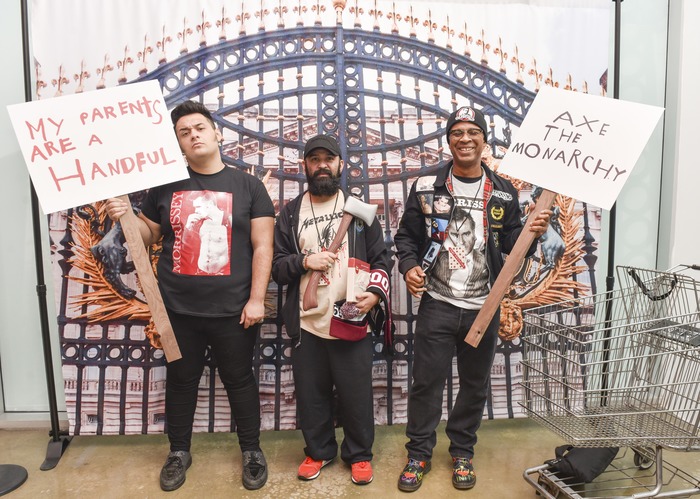 Much has been documented of Morrissey’s Mexican-American fans, who say they appreciate his appreciation; that he’s an outsider like many of them are made to feel, more often than not by the current U.S. administration. “It seems if you’re rich and you’re white, you think you’re so right,” Morrissey sings on his song “Mexico.” “I just don’t see why this should be so.” It’s like Disney with Cocowell-intentioned and largely respectful, if you ignore the fact the studio tried to trademark the Mexican holiday Día de Muertos, and that Morrissey is making money off selling Mexican-Americans an Irish man’s version of their own culture.

Morrissey is a staunch hater of Donald Trump (both in press and on stage), so it would seem that he’s at least correct politically. Except he doesn’t voteproudly never has. And his perceived support of Anne-Marie Waters, a British politician with staunch anti-Muslim views is incredibly troubling. A song on Low in High School called “Israel” includes lines like “The sky is dark for many others/They want it dark for you as well/Israel.” He’s played several shows in Tel Aviv, including a performance where he wrapped himself in an Israeli flag.

Morrissey told the Sunday Times that he sees himself as a pioneer of gender fluidity (“I spearheaded the movement”). He surely contributed to that movement,but he is predated by many public figures from bygone eras, whichMorrissey even highlights in thequeer-friendly imagery he sometimes chooses to accompany his music (Joan of Arc graced the album cover of his album World Peace is None of Your Business). He loves James Baldwin and Oscar Wilde, and his work is literary and sweeping in a way that connects with so many, and has for decades.

But separating the man from the music is getting harder to do.

Fans of Morrissey himself know he’s an ego-maniac and a cynical curmudgeon, and that somehow makes him even more desirable. A new film coming out in December, England Is Mine, tells the fictional but biographical story of how he’s always been that kind of guythe one who seeks to be the counter to everything that exists as normal, acceptable, or even likable. And to some, that makes him an icon. 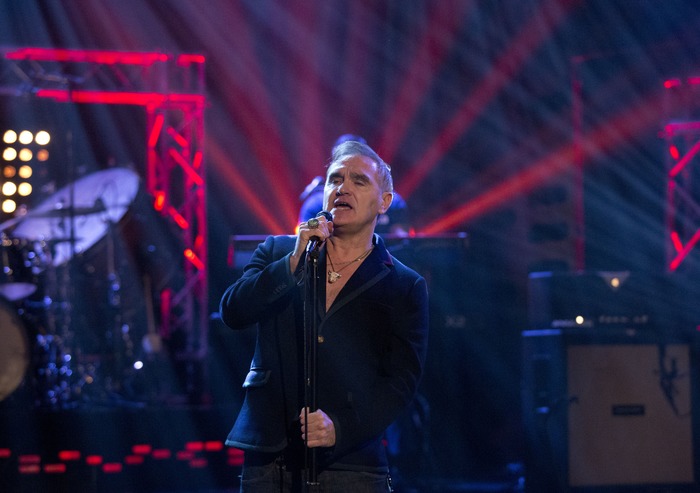 How do we solve a problematic fave like Morrissey? We can’t; we don’t. He’s promised to never do written press again after a recent interview with the German magazine where he felt misquoted and mischaracterized, despite it having been a Q, insisting that he’ll instead only submit to visual or audio press where he can be accurately and authentically him.

The trouble is, that’s exactly what makes him so difficult to love. No matter how smooth his vocals, how enchanting his self-deprecating serenades, how queer he reads, Morrissey is hard to love, and it seems he prefers it that way.

If you can stand all that he stands for, then perhaps you’ll be celebrating Morrissey Day next November.