In Head Over Heels, the kingdom of Arcadia faces its end when Pythio, a plural, gender non-binary snake creature, reveals that they have been sent “to tend the flame of holy knowledge at Delphi and foster change whereto’er [they] see fit.” As such, Arcadia is in peril of losing the one thing that makes its culture distinct: its beat. Thus, King Basilius and his unwitting royal entourage are sent on an Into the Woods-esque quest to preclude the omens foretold by the Oracle.

With a story taken from James Shirley’s The Arcadia, a Fletcherian romantic drama from the mid-17th century, Head Over Heels features a book by Jeff Whitty of Avenue Q, adapted by James Magruder; and songs by The Go-Go’s, orchestrated by Tom Kitt of Next to Normal.

Head Over Heels is exactly what it sets out to be: a silly, queer romp with gender-bending reversals and a thrown-together ending that ties up all its loose ends too neatly; a recapitulation of the endlessly reusable musical theater trope of “tradition vs. change;” a jukebox musical with tunes by an all-female band, performed by an all-female band, in a time when women’s agency over their own bodies is up for debate; a star vehicle for the first transgender actress to create a leading role on Broadway. BuzzFeed‘s Louis Peitzman has called it “the most radically queer show on Broadway,” and though I hesitate to call anything with a Broadway price tag “radical,” he’s mostly right. 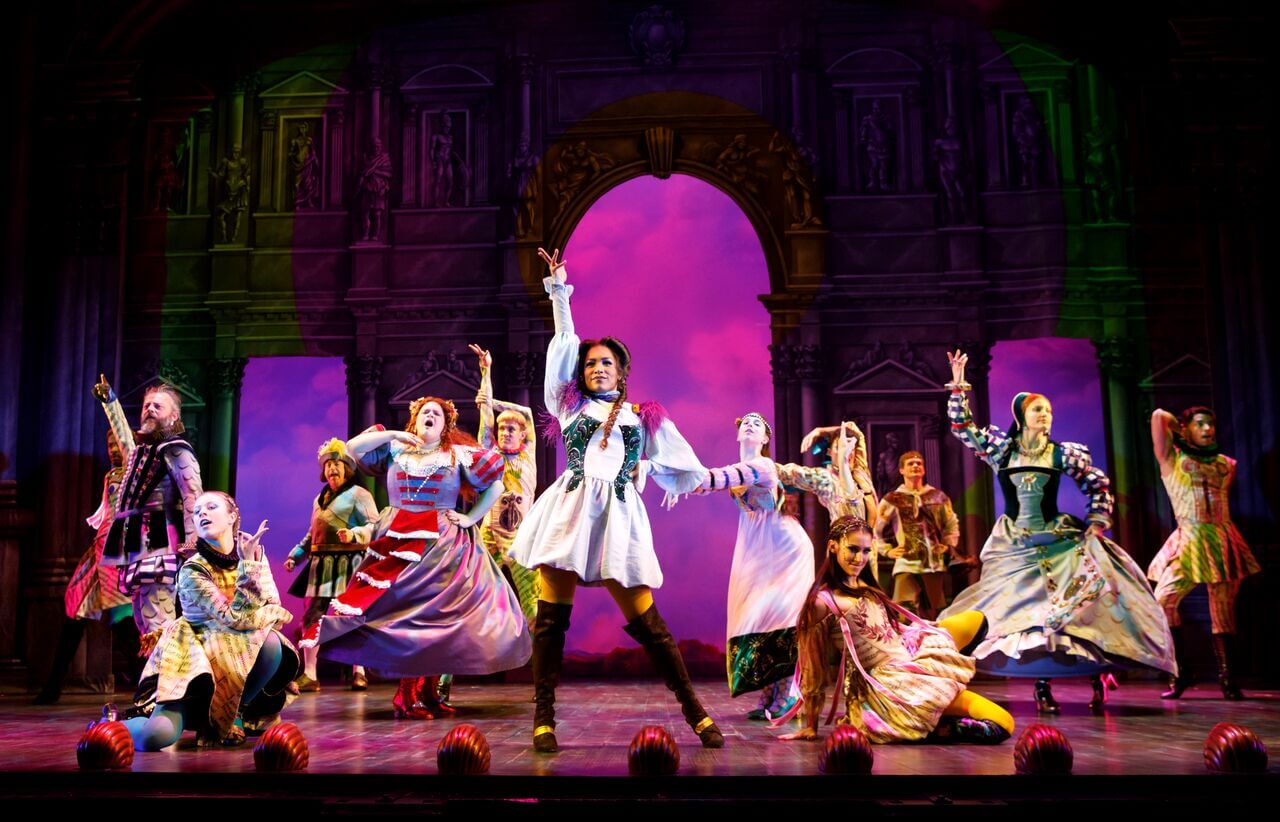 What’s remarkable about Head Over Heels, however, is less about what happens on stage as what has happened off.

On Thursday, the theater industry’s own foolish King Basilius, Ben Brantley, published his predictably petty, transphobic take on this perfectly fine, perfectly fun, perfectly stupid musical in The New York Times, which ignited a long-overdue uproar from the community that prompted the Times to edit the review and to issue an apology from Brantley on behalf of the publication.

Notably, Brantley mocked the gender identification of Pythio, the plural, non-binary oracle played by Peppermint: “Pythio identifies as ‘nonbinary plural.’ Dametas (Tom Alan Robbins), the King’s viceroy and father of Mopsa, finds himself strangely drawn to her — I mean them.” He also referred to binary (as in gender) as “the decade’s most overused word.”

But the enduring irony of Brantley’s review is that the core of his criticism — that Head Over Heels “lacks the courage of its contradictions” and “mutters deferentially when what you want is a rebel yell” — is based in an absolute out-of-touchedness with, and disregard for, the queer audiences that will find lots to love in the piece. In fact, what remains of his review seems determined to tell his readers exactly who Head Over Heels‘ audience is not. His comments have been slammed by Observer, Onstage Blog, The Mary Sue, and on Twitter.

What’s there to love about Head Over Heels? Bonnie Milligan, for one, who steals the show every time she’s on stage as the melodramatic and self-assured Pamela; Peppermint (of RuPaul’s Drag Race), whose fun and self-possessed performance proves, once and for all, that trans actors belong in trans roles on Broadway stages; and Andrew Durand, whose charming, gender-flexible Musidorus is bound to be loved by folks on every point in the gender spectrum. 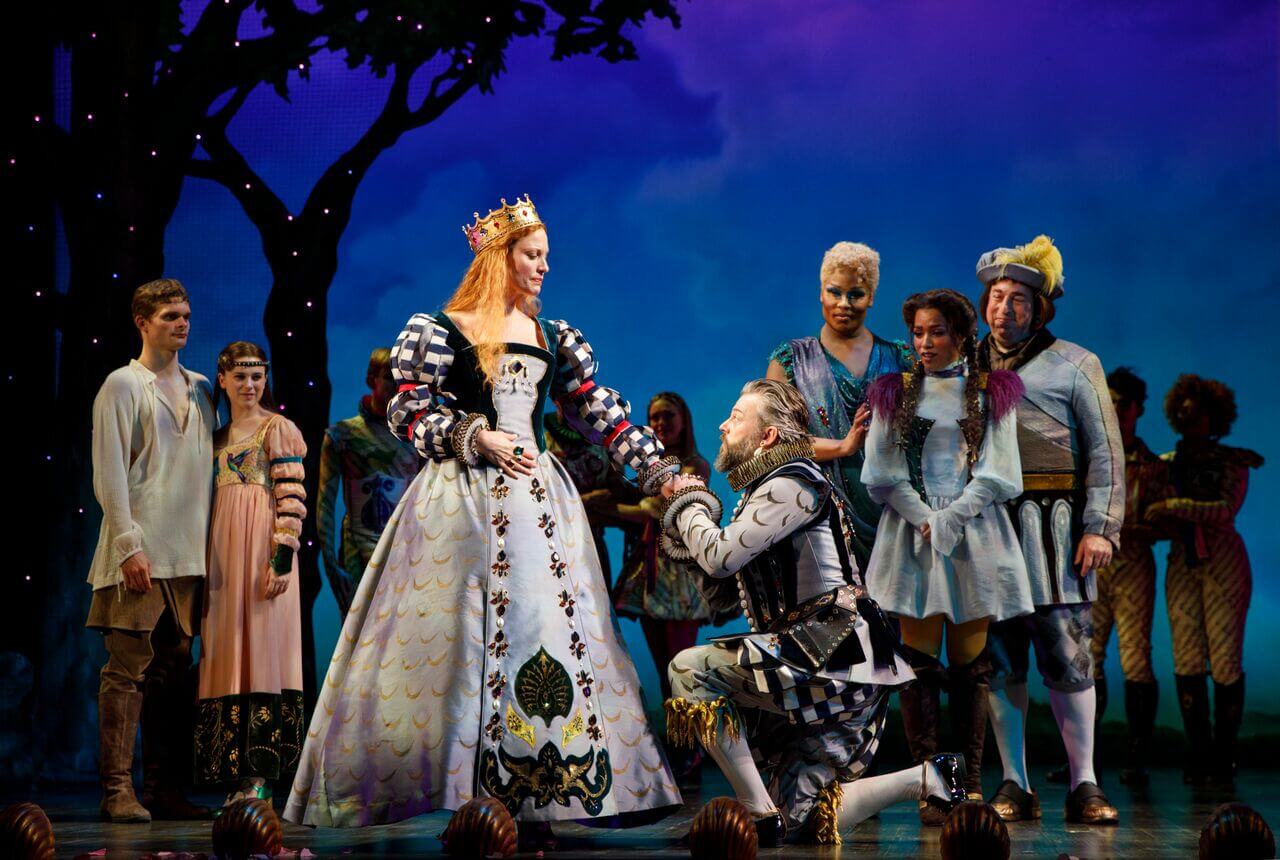 Will a viewing of Head Over Heels inspire transphobic theatergoers to support trans-friendly bathroom legislation? Probably not, but only time will tell. Does it advance the form of musical theater in experimental and exciting ways? No. But is Spencer Liff’s choreography, and the energetic ensemble’s amazing work throughout the show, fun? Absolutely. Is the score a bop? Yes. If you’re not straight and have the cash to spend on an evening of light, fluffy, queer entertainment with song and dance, take a chance on this one. We’re allowed to have fun, you know.

Mr. Brantley, it’s time to face the music: We got the beat.

Tickets to Head Over Heels can be obtained at www.thehudsonbroadway.com, by calling (855) 801-5876, or in-person at Broadway’s Hudson Theatre (141 West 44th Street). Visit www.hudsonbroadway.com for full performance schedule. Ticket prices range from $69 to $169. Group discounts are available for groups of 10 or more through Broadway Inbound by calling 866-302-0995, or online at www.broadwayinbound.com.