Queer as Folk premiered almost two decades ago on Showtime. Its depiction of gay life among a group of Pittsburgh friends is intriguing, problematic, heartwarming, cringe-inducing and often corny. But the stories it wants to tell often have a lot to say about gay life in 2018. As such, INTO is embarking on a rewatch of the entire series, all five seasons and 83 episodes. In this week’s “Rewatch,” staff writer Mathew Rodriguez revisits episodes four through six of Season One. You are invited to follow along on Netflix, where all five seasons are currently streaming.

Parents just don’t understand. And make that double for their queer kids.

This week’s batch of episodes reminds me of a popular tweet about queer life. The tweet said that “gay culture is your parents knowing nothing about you” and ever since I saw the tweet, I thought about everything my mother wouldn’t understand about my life. Would she understand the constant tension between seeing all the queer people around you yet feeling so lonely? What about tops and bottoms? Actress twitter?

In its early episodes, Queer as Folk returns several times to the question of what does it mean to be seen as full queer people. In its first episodes, the characters wished other men in the club would see them for who they are and not just for their physicalities. The point was clear: we want to have sex. Now, in its next few episodes, the series takes a look at parent-child relationships and asks, “Can you know about my sex life and still see me as your child?” For Justin and Ted’s moms, the answer seems to be no. For Michael’s mom, Debbie, it’s not a huge problem.

After taking home a twink from the club, Big Nervous Energy-laden Ted subsequently ends up in a GHB-induced coma. While lying in a hospital bed, Ted’s mom comes to town, prompting friends Emmett and Michael to rid Ted’s apartment of various gay paraphernalia: dildos, pornography and such. Michael and Emmett’s good deed does more than allow the show a moment of levity in the midst of a heavy storyline. As with any queer show, Queer as Folk underscores the importance of chosen family and this brush with Ted’s mother shows the chasm that often exists between who queer people are with our friends and our families.

The show is still able to wring a pretty good surprise from the scenario. While his friends must hide Ted’s sexual realities from his mother, Ted has been hiding an emotional reality from his friends: his crush on Michael. Though these few episodes don’t yet plumb that emotional territory, it’s the second time in the show’s first few episodes that the show deals with the ever-present sexual tension in queer camaraderie.

Justin’s mom gets plenty of screen time in this week’s episodes and her journey mirrors Ted’s mother’s in several ways. Rather than being kept in the dark about Ted’s life, Justin’s mom actively seeks to understand her son. She wants to learn about her son, who she feels is becoming a stranger. (He no longer likes art club!!!) But that reality becomes too much when she finds out that Justin has had sex with Brian, who is 12 years his senior. 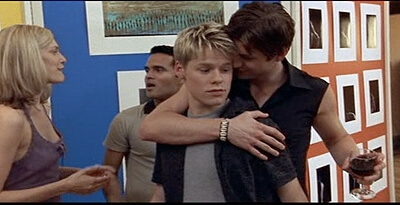 When Lindsay finds out that Justin has a knack for art, she gets him into an art exhibition at the LGBT center. Justin is nervous that if he invites his mother she won’t show up, but to his surprise, she does. For Justin’s mother, her son’s queerness is fine, but the reality of his sexuality is too much. Of course, there’s some validity to the fact that she’d probably have some concern if her 17-year-old child of any gender slept with a 29-year-old of any gender. But the camera does a lot of work at trying to show us how uncomfortable her mother is not just with Justin’s sexuality but with his sex life. When she sees Brian and Justin together in public, she imagines Brian topping her son, showing that she’s uncomfortable with his sexual experiences and possibly his submissive sexual role.

That’s where Debbie Novotny comes in. The show pairs Debbie, played with gravelly-voiced glee by Sharon Gless, with Justin’s mom in a series of scenes. Where Justin’s mother has the door open a smidge, Debbie’s is fully open, to the annoyance of her son Michael, who’d probably prefer his mom tone down her allyship. Of the scenes they have together, one scene in the art exhibition stands out the most. In a lot of ways, Debbie walks in both worlds: she’s a straight parent, but she’s also fully immersed in the boys’ gay drama. She sees Justin’s mother’s reaction to his painting of Brian Kinney and his dick and wants to comfort her while also warn Justin that his mother is about to see *that* picture.

In the vein of alternative families, the show also makes good use of Melanie and Lindsay as surrogate moms for Justin. After he names Gus in the first episode, Justin sees them out in the gayborhood and offers to babysit Gus. This is what leads Lindsay to nurture Justin’s talent, even leading her to offer a letter of recommendation if he applies to graduate school. It might seem like a convenient plot point, but it points to Lindsay’s desire to nurture queer talent and, much like we see weekly on Pose, speaks to the ways queer people step in to nurture young queer people’s talents when others won’t.