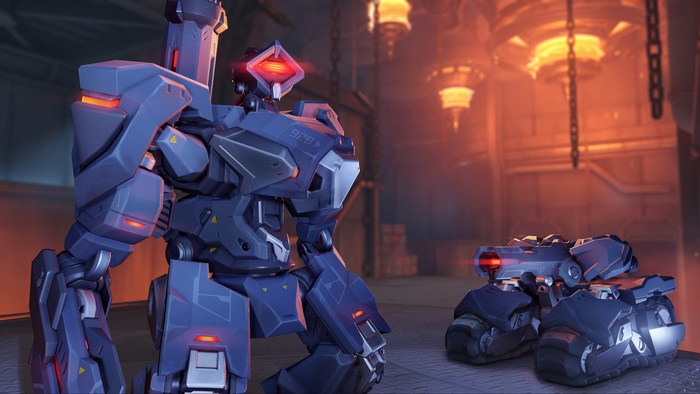 I don’t know what it is about Bastion, but it feels like all of his skins are basically the same and “Stealth” is no different. While other characters get costumes that reference plenty of different genres and styles, it feels like Bastion just gets different models of robot.

The one cute part is that his bird companion, Ganymede, has also been turned into a robot in this skin. However, that does not make up for the rest of it and given that we have some cute skins to get through, this one is sadly in last place. I want better for you, Bastion, I really do. 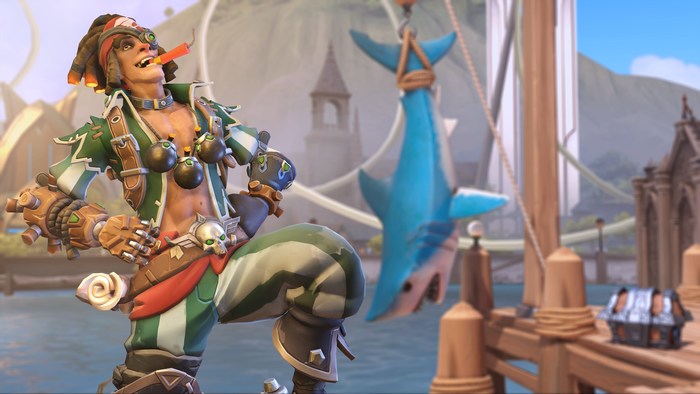 Tell me, Blizzard, how many pirate skins does one game need? I don’t care if this one is called “Buccaneer,” I can see through your disguise. Before this one, we had Pirate Ana and Blackbeard and Barbarossa for Torbjorn. It’s 2018, I don’t have the emotional capacity to pretend to care about three separate pirate costumes.

The colors of the skin are pretty fun and I’m glad it’s referencing a different kind of Jack Sparrow type, but overall, I’m not impressed. 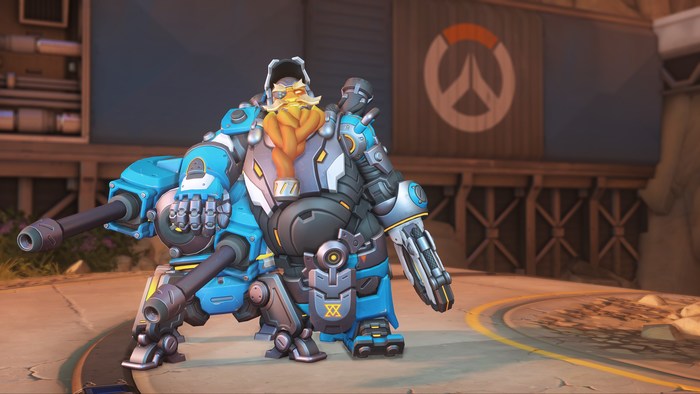 When I first saw this one, I was ready to send it packing. Then I noticed all the cool details on it. Like he’s entirely robotic. His mustache and eyebrow seem to be the same material and even his beard looks like tubes! Something the Overwatch skin designers always get right is their attention to detail.

That being said, the actual outfit is a boot. If it weren’t for these details, I don’t think anyone would have understood that it was supposed to be a cyborg skin at all. 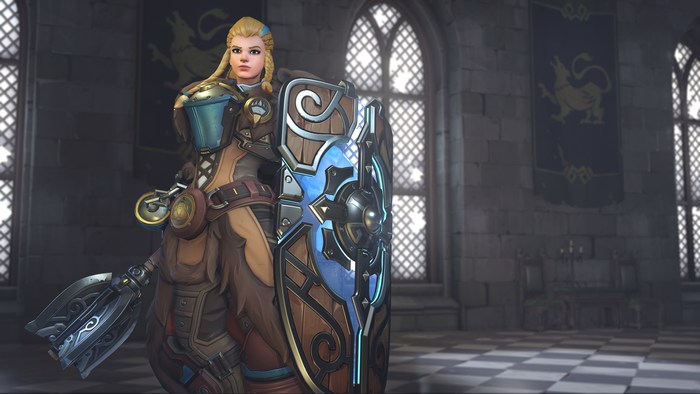 This breaks my heart because Brigitte is one of my favorite characters in the game, but her skin did not make it to the top four. It’s not that there is anything specifically bad about this skin, but it just doesn’t do it for me in the same way some of the ones do.

I love Celtic/Nordic references in the skin and her weapons look cool, but her hair is kind of weird. It’s also just pretty expected, and from what you’ll see in the skins I really liked, they were all pretty far departures from the original character. 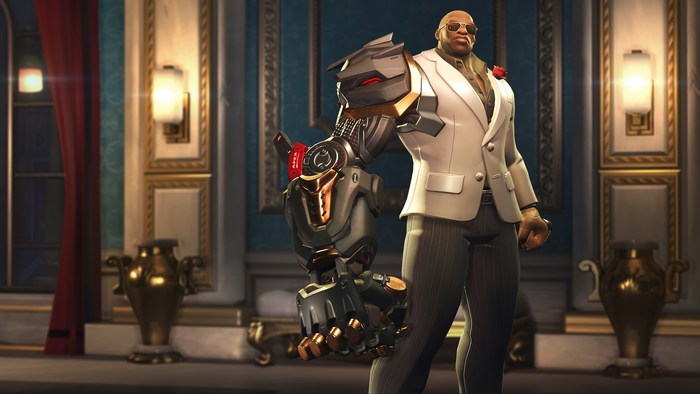 I’m a simple gay and this Fast and the Furious-ass skin is really doing it for me. Doomfist is serving us some James Bond realness in this look. What is really fun about this skin is that it was originally in an Overwatch comic and because fans wanted it, they created an in-game version.

I also really enjoy what they did with his actual gauntlet, which is clearly based on some car designs. 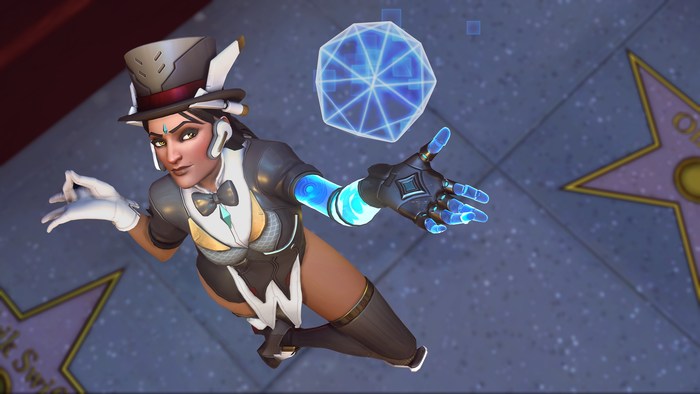 Symmetra has gotten some of the best seasonal skins in the game and this “Magician” look is no exception. I’m not sure what it is about her visual design that makes it so versatile, but they’ve made her into everything under the sun and it always looks fantastic.

This one, again, has a lot of fun details. For example, the four playing card suit symbols are placed around her body. What really did it for me, however, was her blue translucent arm which gives off a little sparkle animation. It’s a great feature that I can’t wait to look at in-game. 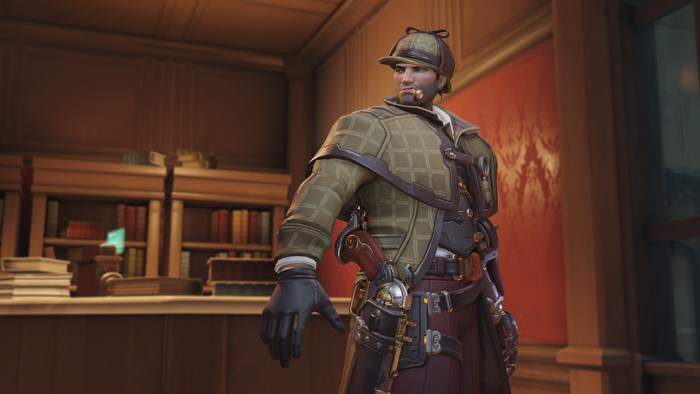 The top two for this list were particularly difficult because they both share qualities that make for great skins. At the end of the day, it comes down to personal taste. For this McCree skin, it was heavily supported by the fact that I’m surprised they keep up coming up with skins that are unique feeling, but still on brand for his character. I mean the man has a revolver, there’s only so much you can do with that.

But still, between the pipe and his deerstalker hat, it’s just an adorable skin. 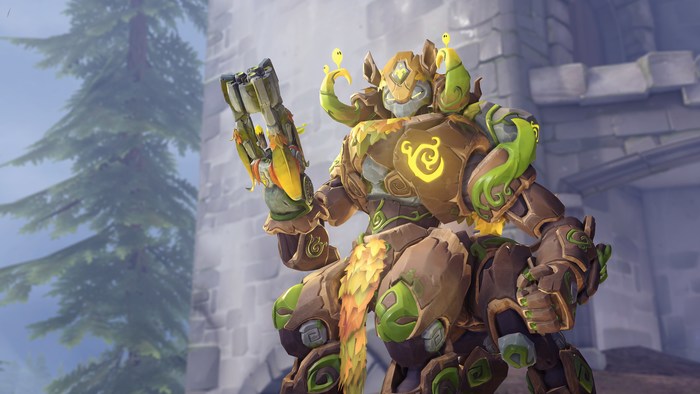 This Orisa skin is just a gift from God. Unlike some of the other skins, I don’t have one specific thing I enjoy about this skin it’s just beautiful. The skin is clearly referencing a dryad, which is a mythical creature that is often visually represented as a tree spirit in a humanoid form. I especially like the little yellow things on the top of her head. To me, they look like Kodama, which are the Japanese equivalent to dryads.

It’s just cool that this skin looks like it could belong to an entirely different universe, but still fits within Orisa’s character. That’s what qualifies it, for me, as the best skin of the event.