Roseanne was abruptly cancelled on Tuesday following backlash to its star’s racist tweets, but it never should have been on the air to begin with.

Roseanne Barr, the actress and comedienne who plays the titular Roseanne Conner in the rebooted ABC sitcom, took aim this week at former Obama adviser Valerie Jarrett, comparing her to a monkey. Barr claimed Jarretta black woman who was born in Shiraz, Iran to American parentslooks like what would happen if the “muslim brotherhood & planet of the apes [sic] had a baby.”

ABC Entertainment President Channing Dungey swiftly responded by saying that the comments are “abhorrent, repugnant, and inconsistent with our values,” signaling that it led to the network’s decision to pull the plug on her program.

Although the show’s abrupt cancellation may have come as a surprise given the show’s high ratings, the bottom had been falling out on Roseanne for weeks. Its season finale hit a series low after plummeting 26 percent in viewership after returning from a month-long hiatus. Showrunner Whitney Cummings parted ways with the reboot, while staff writer Wanda Sykes announced her departure following Barr’s racist tweets.

Meanwhile, four staff writers who worked on the original sitcomwhich ran from 1988 to 1997told BuzzFeed that Roseanne Conner no longer resembles the character they once knew, someone who wouldn’t have had a problem with a Muslim neighbor or voted for Donald Trump.

Barr’s president of choice may be able to survive constant scandals and a revolving door of advisors, but his biggest fan was not. In the Twitter era, there is such a thing as bad publicity.

But while racism may have finally tanked the leaky ship that was Roseanne, it’s alarming what that boat was able to withstand. INTO reported in April that Barr had a long history of attacking transgender people on Twitter, but those tweets did not lead to action on the part of ABC. On March 30, the alphabet network announced that the reboot would be picked up for a second season.

Let’s briefly examine what ABC did not find “abhorrent, repugnant, and inconsistent with [its] values.”

In a 2012 tweetstorm, Barr claimed that Colleen Francis, a transgender woman at Evergreen State College, should not be allowed to use the locker room that corresponds with her gender identity. Francis claimed that she was discriminated against when a woman called the police on her for using the university’s sauna.

“If she has a penis, she’s not allowed in,” she stated in a series of tweets (which have been edited for punctuation and clarity). “I’m sorry, but a dick means you’re a man to me. Maybe I’m old and out of it, but I can’t go there, sorry.

“Women do not want your penises forced in their faces or in our private bathrooms,” Barr continued. “Respect that fact.”

The comedienne’s show has been hailed as a trailblazer for LGBTQ representation on television, which has led many to defend the comments as not representative of her opinions on queer and trans people. Roseanne featured one of the first same-sex kisses on primetime (between Barr and guest star Mariel Hemingway), as well as the first gay wedding featuring a recurring character (Martin Mull).

But these groundbreaking depictions of LGBTQ life didn’t stop her from tweeting memes spreading transphobic propagandalike the debunked myth that transgender people prey on women and children in public bathrooms.

“You haven’t lived until you have seen a huge guy with boobs talking about female hormones and deciding to keep his penis, and how that was a feminist issue,” Barr writes about infighting in the LGBTQ community between butch lesbians and transgender people.

These comments garnered significant attention. They were also picked up by outlets like The Advocate, GayRVA, them, Marie Claire, TransGriot, TransAdvocate, Good Housekeeping, The Establishment, and Raw Story. In Slate, writer Brynn Tannehill argued that even the supposed pro-LGBTQ elements of the showincluding a gender nonconforming kid whose presence appeared to counterbalance her alarming personal viewsactually undermine trans identities.

But even despite trans people saying that Barr’s comments and her show hurt them, she was not forced to apologize. Staff writers did not quit over her tweets being unearthed. Everyone quickly moved on to the next controversy.

The little attention, respect, or care paid to the dignity of trans people is all the more relevant given that the fifth season of Arrested Developmentstarring accused predator Jeffrey Tambordebuted on Netflix the very same day that Roseanne was finally axed by ABC. 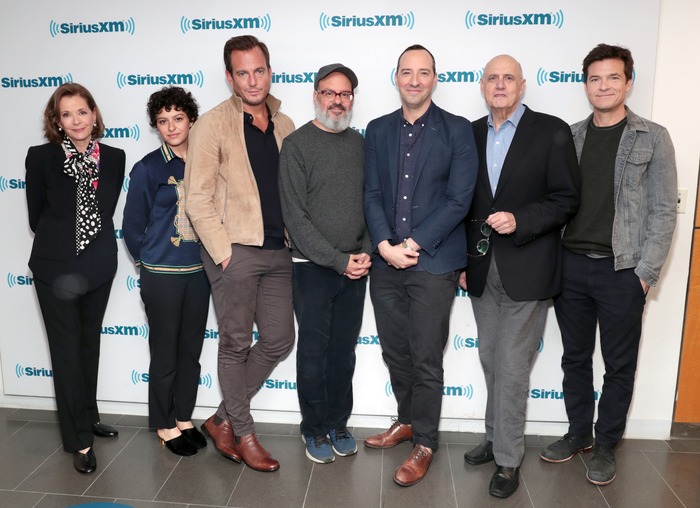 Tambor has been accused of sexual misconduct by three trans women. Van Barnes, his former assistant, says that he repeatedly made sexual advances toward her, claimed she could further her career by bedding him, and watched her while she slept. Trace Lysette, who co-starred on Amazon’s Transparent, alleges that he rubbed his genitalia on her during a scene they filmed togetherpinning her so she couldn’t move.

Lastly, Rain Valdezwho guest-starred in the show’s fourth seasonclaims he repeatedly kissed her on the lips without her consent.

When these allegations came out, Tambor was fired from Transparent, but he was not disciplined by Arrested Development in any way. Not only did Netflix executives speak out to vouch for his professionalism on set (as if his social graces were the issue), several co-stars came to his defense: namely Will Arnett, David Cross, Tony Hale, and Jason Bateman.

In fact, Bateman said that he would leave the show if Tambor were removed. “I won’t do it without you,” Bateman told him during a sitdown with the New York Times. “I can tell you that.”

That interview sparked national controversy, but not because Bateman and his male castmates refused to condemn the sexual assault of three transgender women. People got upset with the 49-year-old actorwho plays Michael Bluth on the long-running cult comedyfor belittling an incident in which Tambor harassed co-star Jessica Walter on set.

Walter, the woman behind the beloved boozy Bluth matriarch Lucille, claims that Tambor screamed at her while filming a scene. Bateman dismissed the altercation as the cost of show business, which he calls a “breeding ground for atypical behavior.”

“What we do for a living is not normal, and therefore the process is not normal sometimes, and to expect it to be normal is to not understand what happens on set,” the actor said. “Again, not to excuse it… but to be surprised by people having a wobbly route to their goal, their processit’s very rarely predictable.”

Within hours of the Times interview’s publication, Bateman was forced to walk back his comments on Twitter.

“I’m incredibly embarrassed and deeply sorry to have done that to Jessica,” he said in a series of tweets. “This is a big learning moment for me. I shouldn’t have tried so hard to mansplain, or fix a fight, or make everything okay. I should’ve focused more on what the most important part of it all isthere’s never any excuse for abuse, in any form, from any gender.”

Although Bateman added that the “the victim’s voice needs to be heard and respected,” it’s notable who his mea culpa leaves out: the trans women this discussion was actually about. He didn’t even say their names. It’s doubtful he knows them.

If you think this is a harsh assessment, note that the phrase “victim’s” is singular, not plural.

Barnes, Lysette, and Valdez were summarily erased from their own quest for justice within the span of a couple hours. Comparing search traffic in Google Trends, interest in Jessica Walter spiked at a perfect 100 the day that the public listened to her break down in tears recalling a shocking and brutal act of verbal harassment.

Conversely, not a single one of Tambor’s trans accusers garnered more than a score of 3 on Google’s metrics since they first came forward. Her harassment eclipsed their right to their own bodies.

Every single one of these women should be listened to. Walter’s story is a reminder of the rampant abuse to which Hollywood actresses are subjected by toxic menwhether it’s David O. Russell bullying Amy Adams on the set of American Hustle, the stars of Blue Is the Warmest Color being forced to film sex scenes for hours on end, or Marlon Brando assaulting costar Maria Schneider while filming Last Tango in Paris.

This behavior has been normalized and legitimized for decades by an industry that views women as replaceable. If one actress is unwilling to be mistreated, another will be waiting to take her place.

But too often abuses perpetrated against transgender people are immediately brushed asidenever given equal space in the cultural conversation or afforded the gravity that makes these allegations actionable. When society doesn’t view transgender women on the same level as cisgender women, what happens to these individuals sadly doesn’t matter as much.

This is why two dozen trans peopleprimarily women of colorcontinue to be murdered every year in the United States with little national outcry. Their lives aren’t treated with the same weight, and thus, neither are their deaths.

Taking violence, harassment, and abuse perpetrated against trans survivors seriously begins with giving victims exactly what the people harmed by Barr and Tambor have been denied: accountability. The public must allow transgender people the platform to have their voices heard, their identities affirmed, their truths validated, and their lives made visible. They should be leading #MeToo, not marginalized by it.

Until we as a culture create space for trans people, we can’t expect that those who abuse them will ever face the consequences they deserve.