The world’s best drag queens have worked our screens for the better part of 10 years, but not even that compares to seeing them Werq The World in person. Originally conceived by Shangela, the official RuPaul’s Drag Race tour sold out last year with 10’s across the board, so it was hardly a surprise when producer Brandon Voss decided to come through and bring the show back for 2018.

With sickening production values and the kind of boogies that even RuPaul would envy, Werq The World kicked off its European leg on May 18 in Berlin, a city that championed the spirit of drag decades before RuPaul became the Cover Girl that fans know and love today. Former winners like Sharon Needles and Violet Chachki appearedalongside a number of fan favorites, each of whom left our audience gagging throughout while sharing a surprisingly heartfelt message along the way.

The Berlin line-up for Werq The World unfortunately omitted a few of the bigger names who usually show up like Detox, Alyssa Edwards, and Bob The Drag Queen. Their absence was even harder to ignore as the show opened with a compilation of clips that heavily featured all three and regular host Michelle Visage was unable to make it either due to filming commitments for the finale of Season 10.

RuPaul’s best friend was still there in spirit, though, introducing the tour’s aviation theme via pre-recorded videos that set the tone while reminding us that her very own “flotation devices” are ideal to grab onto in the event of danger. A virtual departure board on stage then revealed where each of our favorite queens would take us that evening before they themselves came out to sissy that walk on stage.

After the Drag Race alumni all enjoyed the spotlight for a moment or two, Shangela “Laquifa Say WHAT!” took the stage to reveal that she would be tackling host duties for the evening. After she introduced herself, audience members were quick to shout out that the All Stars 3 finalist had been robbed of the crown earlier this year, something which she must be rather used to hearing by now. Shangela responded by telling us that she hadn’t been robbed. No, she had in fact been “burgularized!” Cue a hysterical uproar which reminded everyone exactly why the “Nancy Drew of drag” became a fan favorite in the first place.

Fellow All Stars 3 finalist Kennedy Davenport then took to the stage after a long night of hooking with a tropical dance number that slayed thanks to impressive flips and high kicks that would have surely untucked a lesser queen. Although the Brazilian location made about as much sense as her now infamous Death Becomes Herlook, Davenport pulled out all the stops and the four backing dancers looked great with their tiny Brazilian-themed shorts nonetheless.

Next up was Kim Chi who quite literally transformed into the lead character from Sailor Moon to stunning effect. Decked out like a cosplay dream with two long pigtails trailing behind, Kim Chi incorporated quotes from the show into an extended dance routine, proving that she’s come a long way since those choreography mishaps on RuPaul’s Drag Race. The only thing that could have made this segment even better would be if the “Fat, Fem & Asian” star had performed her signature song from the Season 8 finale. 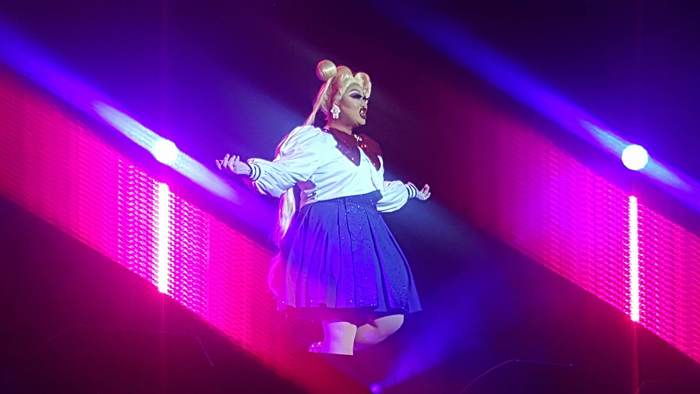 Next, Halloween came early as audiences were transported to Transylvania by Sharon Needles who performed a suitably gothic rendition of Lady Gaga’s “Marry The Night.” Between the dead animals on screen and graphic quotes from The Exorcist, the Season 4 winner gave us life with her undead showmanship and more latex than all of Berlin’s underground clubs combined. 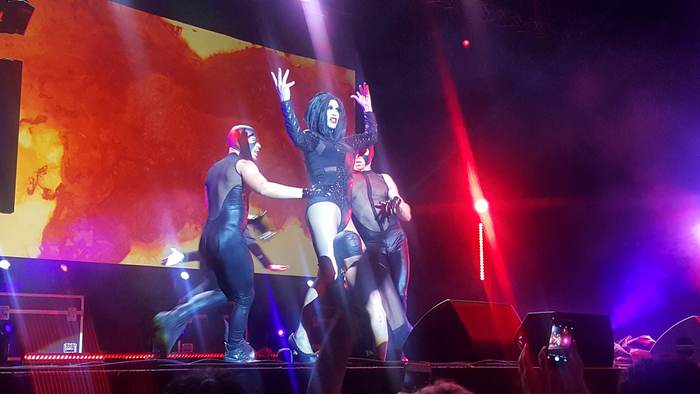 Shangela then came out for her first solo number, lip syncing the song “This Is Me” from The Greatest Showman soundtrack. At first, her puffy plastic dress failed to impress, but as emotions rose in the song, so too did the various parts of her outfit which turned out to be the same spiky red costume she wore in the seventh episode of All Stars 3. Throughout the rest of the night, Shangela continued to veer between hilarity and sincerity with the kind of finesse and professionalism that has become the seasoned queen’s trademark, making her the perfect choice to take over hosting duties from Visage.

As the reigning title-bearer of Miss Congeniality, Valentina then taped a segment during the halfway intermission where she announced the name of each Season 10 queen who could potentially inherit her crown in the upcoming finale. Vanessa Vanjie Mateo, otherwise known as Miss Vanjieeee, won the most applause from the crowd, but the biggest surprise was that the crowd actually started to boo when The Vixen’s name was announced. 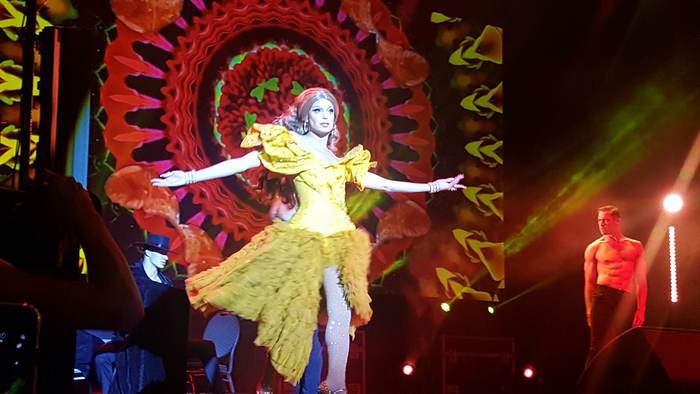 To her credit, Valentina was quick to defend Season 10’s most divisive contestant, something which she failed to do following a backlash in her own season. The Latina queen then continued to impress in her own Spanish lip sync number with a gorgeous yellow dress that extended across the entire stage, proving that she finally has “the stuff to go all the way” with nary a face mask in sight.

Violet Chachki demonstrated next that she really was “The One” to beat during her season thanks to a jaw-dropping performance set to Kylie Minogue’s song of the same name. Thong-clad dancers initially stole our attention, but the Season 7 queen quickly reminded us how she beat out her competitors in the first place by pulling apart a stunning headdress to form two giant fans that she coyly danced behind. As if that wasn’t sickening enough, Chachki then took her burlesque performance to the air, stunning the audience with her grace and poise high up above the stage.

Anyone afraid that Latrice Royale wouldn’t match up to Chachki’s performance can eat it as the chunky yet funky queen then pulled out a show-stopping rendition of her new song, “Excuse The Beauty,” alongside guest star Epiphany. As the only act to sing live, Royale and her giant frilly dress commanded the stage like only true royalty can, and she even waved her own banner around at one point, catching it elegantly mid-air. 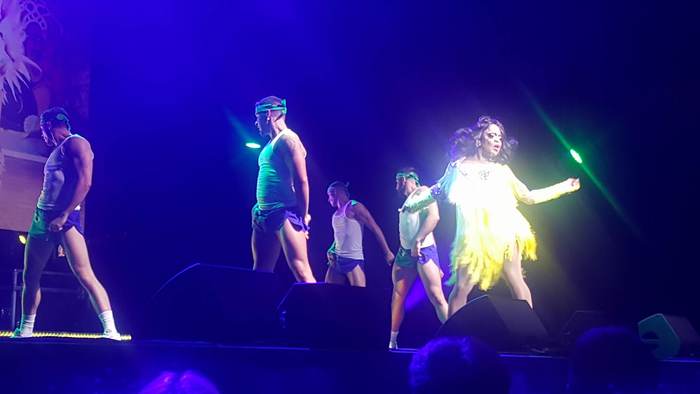 The final solo of the night came courtesy of Shangela once again who performed what was quite frankly the best Beyoncé concert I’ve ever been to. Lip syncing to a medley that spanned 20 years, Shangela proved that impersonating Beyoncé is her destiny, even after she accidentally slipped on stage at one point. Ever the professional, Shangela balanced her various numbers with the kind of hosting skills that could put her in the running should RuPaul ever decide to retire. 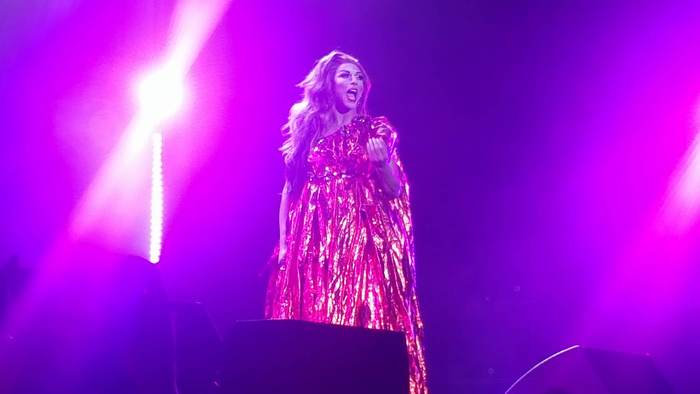 Werq The World ended with the queens reuniting on stage in sparkly silver outfits, dancing to the gayest medley in Herstory. Each performer had their moment to shine as various Madonna, Lady Gaga, and Mama Ru tracks thumped in the background, but what impressed me more than any sickening dance moves or extravagant death drops was the feeling of unity that these former contestants shared on stage. 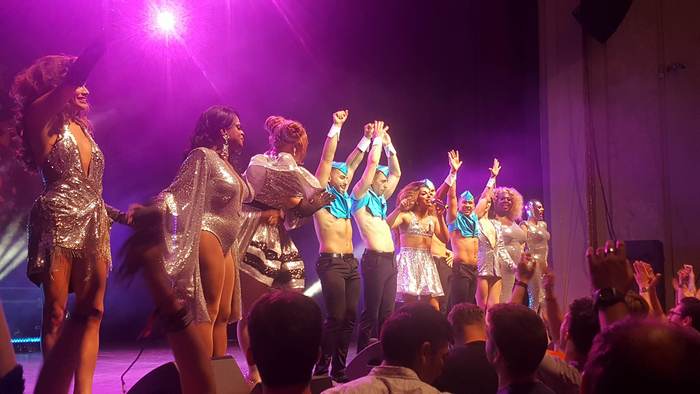 Most international fans of RuPaul’s Drag Race have only ever seen these talented Glamazons fight each other for the crown, yet the atmosphere at the Admiralspalast tonight was one of solidarity. Whether it was Shangela introducing each queen to rapturous applause or Valentina silencing audience members who booed The Vixen, this first stop on the European leg of Werq The World sent out a powerful message of tolerance that echoed what drag is really all about. Sure, the show which this tour was based on might not be RuPaul’s Best Friend Race, but at the end of the day, this inclusive attitude is something that these queens wear extremely well.