Consider this one of those “I watched all 13 episodes of Runaways so you don’t have to” pieces, because that’s exactly what I did: I sank into my couch like a piece of lesbian trash, inhaling boba tea and dairy-free brownies for 13 fucking hours—well, the episodes are 45 minutes each, but I’m accounting for the commercials and emotional turmoil I endured.

This is all to say: watching Season 2 of Marvel’s Runaways was a giant waste of time, because nobody—not even once—tore each other’s clothes off. And let’s be real—isn’t that what matters?

Season 2 fell victim to the same tragedy that befell Riverdale’s second season, in that the show wasted too much time on petty parent drama, time that could’ve been spent on horny teens solving crimes. Regardless, that wasn’t my issue with Runaways. I enjoyed the inaugural season of the Hulu drama, mostly because of Virginia Gardner, who plays Karolina Dean, the first out lesbian superhero protagonist on a Marvel show (or on any Marvel screen). In the first season, Karolina realizes she’s gay while witnessing two girls kissing at a party, then subsequently falls for her friend, another witchy protagonist, Nico Minoru (Lyrica Okano). The duo shares a kiss or two, but at the end of Season 1, it was unclear if Nico was actually into swapping Sapphic spit.

Being pessimistic—or just realistic, given how lesbian characters have historically been treated and discarded on-screen—I thought Nico would ditch Karolina in Season 2 and make Karolina feel weird for kissing her in the first place (thanks, internalized homophobia). Luckily, I was proven wrong; the girls are a fully functioning same-sex couple this season, inconsequential fights with immediate resolutions and all.

The thing is, there wasn’t enough action. Or, let me rephrase. Earlier I said “too much parent shit, not enough teens solving crimes,” but what I really meant was “not enough scandalous behind-closed-doors hookups with your parents’ greatest business rival’s daughters.” There was butt-kicking action, but no butts, and no action. 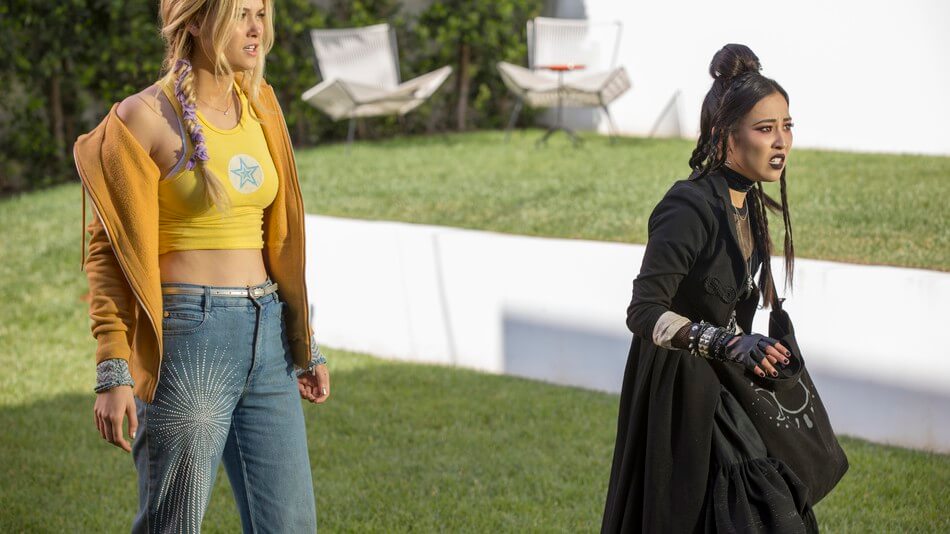 Look, I’m part of the Gossip Girl generation; I was raised on The WB and CW shows of the late ’90s and early aughts, an era of “peak TV” for teen dramas—the aforementioned Gossip Girl, The O.C., One Tree Hill, the 90210 reboot, The Vampire Diaries, Buffy, Degrassi—the list goes on. So, I know good teen drama when I see it, and I also know that the bread and butter of this genre is steamy sex scandals: Serena van der Woodsen and Nate Archibald, Blair Waldorf and Nate Archibald, Blair Waldorf and Chuck Bass, Serena van der Woodsen and Dan Humphrey… Teen dramas are horny. This isn’t news. But season two of Marvel’s Runaways was devoid of a single drop of sexual tension between any character, and there are six protagonists, and FIVE of them are in relationships!!! How is this possible?!

It’s not that Karolina and Nico’s queer relationship is watered down, it’s that every relationship is stripped of passion, tension, and sensuality. Each couple, including Karolina and Nico, just keeps hugging and pecking on the mouth! And not even loving, tight-lipped, Clean Teen-esque pecking. It’s like, obligatory, soulless goodbye pecking. The most action we see with any couple is between Alex (Rhenzy Feliz) and his girlfriend when they exchange dry-lip kisses and become horizontal as the camera pans away. Another couple, Chase (Gregg Sulkin) and Gert (Ariela Barkes), never even make out, but he later implies that they have “naked” sleepovers and that she’s a sexual “animal.” However, we never see that. No one removes a single layer of clothing in this show.

Karolina and Nico make out once, and again, it’s like a strange, tongueless form of Born Again kissing that made my eyebrows scrunch together. And again, all the Nudie Judy stuff is just suggested. Like, when Karolina and Nico tongueless-make out, and Nico maybe sort of almost straddles Karolina from an angle which we can barely see either of them in, the camera cuts away. Then, Chase sees a glowing light coming from their room (Karolina glows when she’s excited, as part of her superpowers), and he quips, “Looks like they’re having a good time.” Well maybe they are, but we wouldn’t know!!!

I need more Stephen and Elena, and then Damon and Elena, then Elena and Matt, then Matt and Caroline, then Caroline and Tyler—on The Vampire Diaries, every actor was literally 35 playing 17, and they were all shirtless, all the time. But Marvel’s Runaways is literally nonsense for babies—like, who is this for? A teen celibacy club? It can’t be for Christians, because lesbians. At one point the youngest character, Molly (Allegra Acosta), who’s 14, says “Shit” and everyone blanches, asking, “Did Molly just curse?!” I mean seriously, this show makes 7th Heaven look like Sharp Objects, and 7th Heaven was basically Republican state TV.

And on the lesbian note, here’s another gripe: Neither Karolina nor Nico ever talk about anything queer—sex stuff, coming out, first girlfriends—nothing. I think the Runaways writers probably intended for this element of the show to be progressive and to send the message that being queer is so not a big deal that it’s not even worth thinking twice about. I respect that, but it’s just unrealistic. Yes, it’s good that none of Karolina and Nico’s friends gasp or blush or comment on the two of them “suddenly” being queer—seriously, that’s great. But Karolina just came out! Yes yes, in a perfect world, no one would have to come out, and Karolina certainly didn’t. But that’s just not reality right now—it’s a mystical utopian future that we don’t live in.

In real life, Karolina would need to talk to someone, anyone, about what she was going through, from the moment she realized she might be gay, to her first gay kiss, to being in her first relationship with a girl. And, as far as we know—which we don’t, because they never talk about it—this is Nico’s first relationship (and kiss, and alleged sex) with a girl too. I’m sorry, but if two teenage girls started (allegedly) boning and didn’t have any other queer friends, they would certainly be having conversations about what they were going through! They would at very least be communicating their wants and needs and fears surrounding sex stuff, ie: “I’ve never done this before,” or “I’ve never felt this way about a girl,” or, “this is so cool, it’s just like in the Hayley Kiyoko video.”

Plus, everyone knows The First Girl is a breathtaking, all-consuming, life-altering endeavor. It’s bewildering to think that two queer women aren’t spinning out, overthinking, ruminating about their crush, especially their first same-sex crush, every waking minute of the day. Have you been on Twitter? All we do is bemoan our romantic shortcomings and retweet photos of hot actresses. We are literally always talking about being gay, and if we’re not talking about being gay, we’re asking our friends for advice on being gay, because we always need to talk things the fuck out. The idea that a thought about a girl could just glide through our mind without a snag or contemplation or 10-hour conversation is outrageous to me. Grow up, Runaways!!

So, even though this show is, in theory, going where no show has gone before (featuring two openly queer female superhero protagonists as a couple), it still feels like there’s erasure happening. Not in terms of representation, obviously—Nico is one of TV’s very few queer female Asian-American characters. But insinuating that queerness is so NBD that there’s no need to discuss it at all totally negates the very real struggles of the queer experience. Did my friends and family gasp when I came out? No. Were they surprised, and did they have questions? Sure. Have I spent every moment since I came out dissecting my sexuality and relationships in therapy, or with friends, or on the goddamn mind-numbing abyss of the internet? Tirelessly! I’m so fucking exhausted by my own queerness!!

If you’re looking for a new show with gay shit, I’m going to have to suggest skipping this one. It’s not worth your time. Although I will praise Marvel’s Runaways for doing something that’s maybe never been done in film or TV before, and that’s the inclusion of a lesbian prophecy: Toward the end of season two, a female alien shows up on Karolina’s doorstep and calls Karolina her “betrothed,” insisting that they’re prophesied to be together: Karolina is her one true love. Even though prophecies, in general, are an extremely lesbian concept, I’ve never seen a Harry Potter-like, a long-storied prophecy about a same-sex couple.

Obviously, there’s no gay sex on this show. So, the most lesbian thing to a happen on Runaways season two is when a woman that Karolina has never met says “our destinies are woven together by prophecy…My savior, my soulmate, the love of my life.” Now that is some dyke shit.