“I’ve been uncomfortable with heterosexuality my entire life,” poet D.A. Powell says with a laugh during our happy hour soiree on a brisk San Franciscan day. “The fact that classmates and professors were uncomfortable with my poems secretly made me very happy…it kept me up at night working.”

“I loved those two lines on their own, but I wanted them to be one long line,” the poet tells me, beers resting chilly in our hands. He runs his right index finger through the air as if he is reading one of those long lines, his point traces into the forevers of our happy hour: a warm little pub hidden in the chasms of a foggy downtown.

After mashing the lines together, the then-graduate student finished the poem in the daring form. His lines were long and full of syllables, up to 20 or more. They were the type of lines that would make publishers and bookmakers quake in their clogs. Powell then wrote a few more poems in the same form to complement their elongated sibling and turned them in to be workshopped by his professor and peers.

“They provoked a lot of discussion. In fact, most people were very against those poems and their structure, and so I thought, ‘I’m going to keep going with this.’” Powell’s smile is surrounded by neat white scruff on his cheeks. “I’ve always been a try everything kind of guy. I never felt like I was committed to any one way of form. What I love about poetry is that you can have it any way you want to have it,” in a nano-pause he sets up his joke, “much like sex.”

The long-lined stanzas eventually turned into his first collection of poetry Tea (1998) which many critics consider a paramount account of the AIDS epidemic, but Powell, openly HIV+, remains stalwart in the introduction of the work: “This is not a book about AIDS…I do not deny this disease its impact. But I deny its dominion.” 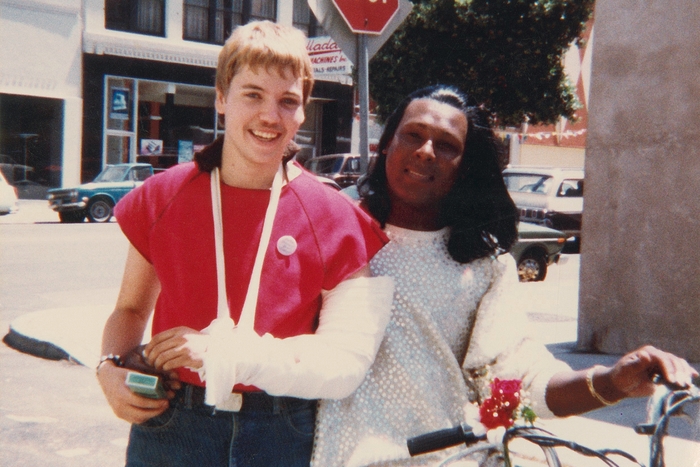 The opening poems are paradoxes, wistful celebrations of life in death, and complex elegies for brothers buried. “nicholas the ridiculous: you will always be 27 and impossible. no more expectations.” It is filled too with emotional, relationship tragics: “we rubbed each other out: a pair of erasers.”

Tea was succeeded by Lunch (2000), and Cocktails (2004) to complete a classic trilogy of writing still largely unknown by the larger queer community. My favorite Lunch line: “my father and me in hollywood: fading and rising starlets.” My favorite Cocktail embellishment: “we need a little glamour and glamour arrives: plenty of chipped ice.”

During the years that followed, Powell began the poet/professor tract and lectured at Columbia, Sonoma State, Harvard, and San Francisco State and still managed to win The Kingsley Tufts Poetry Award for Chronic (2009), a rural, funny, heart dismantling and assembling collection of poetry about the terminus of a long-term relationship. Its golden goose eggs: “corydon and alexis” & “corydon and alexis, redux.” A line permanently remembered: “but together we found an old-growth stand of redwood/we gouged each other’s chests instead of wood: pledges that faded/he was not cruel nor I unwitting. but what endures beyond any thicket?”

“Many people are terrified of being alone,” Powell tells me, “whereas I get home and I’m like, ahhh, it’s so nice to be by myself, not have anyone yapping at me.” He is genuine and is snuggling into the couch across from me. “Don’t get me wrongsex is fun, I’m pro-sex. But it’s like if you go to an ice cream shop for a long time, after a while you get tired of ice cream. And the thing is, I spent most of my younger adult life in an ice cream shop. And now it’s like: I don’t know if I want ice cream.”

Powell is the master of erotics. His sexual imagery seduces and excites, handcuffs E.E. Cummings comparably vanilla wrists to the headboard. He slows down the action, zooms in on the specifics, and like his long lines of verse, draws out the reveals.

“The timing of poetry is where eros gets most potent because you know that you could show a little, wait a minute, show a little. I pretend I’m speaking only to myself but knowing from time to time that someone is listening.”

“Boonies” a poem from 2012’s Useless Landscapes: or A Guide For Boys (Powell liked both titles so much, he naturally combined them into one long title) describes outdoor romps. “We’d keep together, he and I/ and we’d gain meaning from our boyage; we’d pursue/ each other through the crush of darkling rifts./Climb into each other’s precipitous coombes.” The poem is hilarious, featuring so many queer words it recalls Carroll’s “The Jabberwocky.” But the poem’s adventure is set in the boondocks outside of Yuba City, California, the town where Powell spent much of his early life.

“Most of the time we would hang out outside of town, because if we hung out in town we’d get our asses kicked, so we would go to the river bottoms, to the cemetery, the dirt road, bring booze and speakers, we had a whole gay community that was used to meeting totally off the grid.” 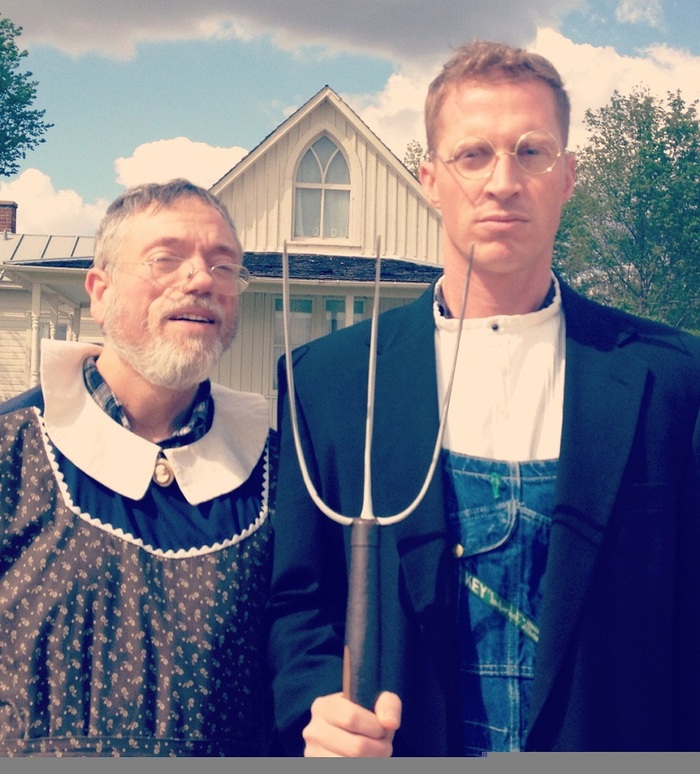 Powell and novelist Andrew Sean Greer roadtripping around Iowa a few years ago.

There is no surprise of the landscapes that later emerged in Powell’s work, his earlier collections more urban poems, his more recent work venturing into the rurals, into the wilds. Specific grasses and flowers growing their way onto his pages, red-winged blackbirds perching on the typeface.

And underneath it all, a didactic voice. The one Powell yearned for as a confused Yuba City boy. The voice permeates throughout Useless Landscapes: or A Guide for Boys and offers sage advice, lustful warnings, and, of course, cruising tactics, all healthily taken with a grain of Himalayan pink salt.

“A lot of my poems are addressed to a younger version of myself, but I don’t mean me, I mean someone else around that age having the same experiences that I was having,” Powell says. “You have to write about what you know, but you don’t necessarily have to tell what you know in the way you know it. Poetry allows you to move things around.”

The best advice from the collection: “the world is full of lovely but tragic boys,” “You should have stayed wild in some valley town if that’s the life you wanted,” “You’ve got to put on the outfit that says: I don’t want to fuck you. I just want to dance. But also: meet me in the parking lot with some blow,” and lastly, “Don’t meet those eyes.”

“When I was growing up I would have loved if there was literature that was reflecting the life I was living. There was a narrative of queer teenage life but it was all urban and tragic and I didn’t want to be either of those things.”

Now, at 54, nearly 20 years since graduating from graduate school and the publishing of Tea, Powell swoops in like his red-winged blackbirds returning as a guest professor at the Iowa Writers’ Workshop to teach a poetry workshop course for a semester. 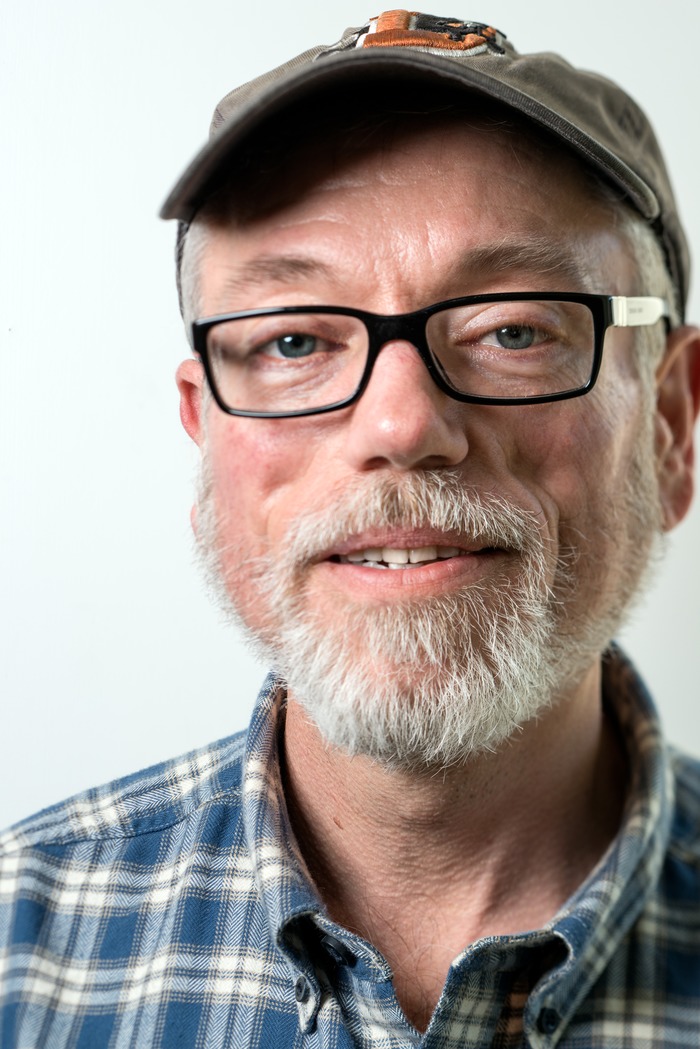 “Part of the reason I like teaching there, or anywhere is because they don’t have a lot of gay professors. And there are so many gay, lesbian, and trans students who get into workshops and don’t have any queer professors, so I go there for them,” he says. “I remember part of the drama of submitting early works of Tea was going into a workshop asking myself how much should I reveal?”

New work is coming together at the right pace for Powell, but “quite slowly in the eyes of my publisher” he says. “I always wanted to publish my own book, but I did that (five times). Now primarily, I write for my own pleasurewhich is sometimes awfulbut I’m okay with that. I feel I’m finally writing the book for young people that I’ve been wanting to do, but it’s also kind of dirty at the same time? So I’m uncomfortable with that, but oh well.”

Before parting, Powell reads me a few of his new poems. I am laughing my ass off at a smutty line about a very dirty mother, and I see an ever-evolving poet uncomfortable with stagnation with new works nothing like the old.