A few months ago, a stately portrait of former President Barack Obama wearing his beloved tan suit against a similarly sandy backdrop, was shared across social media.

He peers as other heads of states have, over his shoulder as if he was reflecting on his historic presidency. A rumor circulated that the painting by the Dutch artist Edwin van den Dikkenberg was the 44th president’s official portrait. The claim was false, but it revealed the internet, if not America, wanted the former president to be radically monumentalized.

Last week, The Smithsonian National Portrait Gallery announced that former President Barack Obama and First Lady Michelle Obama had picked the black artists Kehinde Wiley and Amy Sherald, respectively, to paint their official portraits. The choice of the openly queer Wiley by Obama is both obvious and radical, keeping with the internet’s wishes. 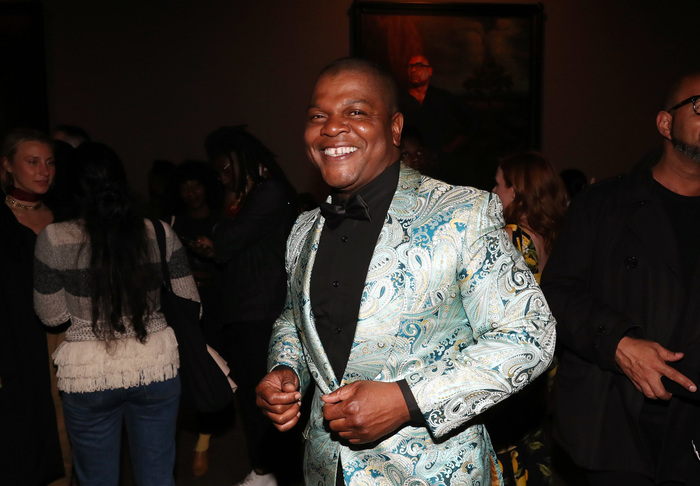 For nearly a decade and a half, Wiley has shown his mastery of the canvas as it has been historically and contemporarily defined. Considering Wiley’s art narrowly, the choice of the first black president to choose Wiley aligns with the artist’s practice of painting black men in power and empowered. In response to the news, some have myopically called, Wiley a “Hip-hop portraitist” just like many in 2008 called Obama “America’s first Hip-hop president” despite his red and blue state platform of unity. But given the logic, as fraught as it may be, pairing Hip-hop’s portraitist and president would seem like a foregone conclusion. 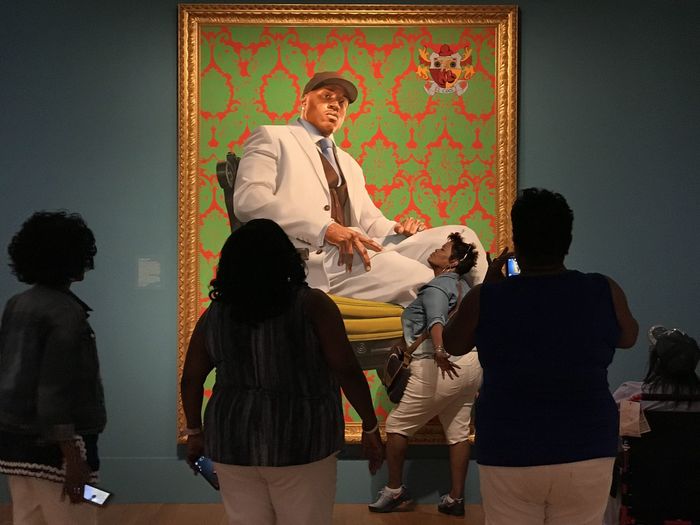 In painting the Notorious B.I.G., LL Cool J, and Big Daddy Kane or 2005’s “Napoleon Leading the Alps,” where Wiley recasts a black male sitter as the 18th century French emperor, riding high on a white horse, the 40-year-old artist is concerned less with painting a history of Hip-hop or showing a black man can gallantly ride a horse too. Wiley’s paintings are in part about properly contextualizing black cultural icons and regular black folks in the history of their society. “Painting is about the world that we live in. Black men live in the world,” Wiley once said. “My choice is to include them. This is my way of saying yes to us.” 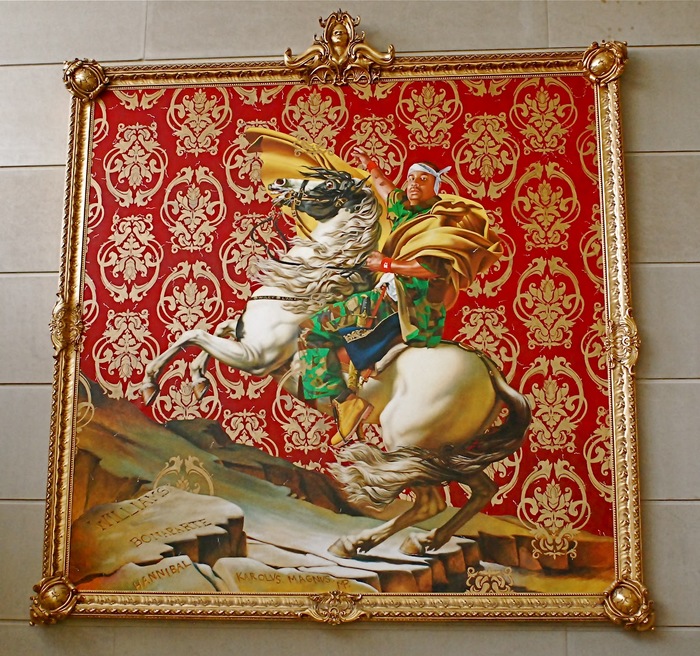 Wiley’s portrait of Napoleon imitates the power, posturing, prestige, and beauty of the Old Master Jacques-Louis David’s Bonaparte Crossing the Alps at Grand-Saint-Bernard to say blackness poses universality. It’s a huge painting, meant to use blackness to overpower and overtake us as we stand in front of them.

This is one of many of Wiley’s works like 2006’s Portrait of Andries Stilte II or Equestrian Portrait of King Philip II (Michael Jackson), a 2010 picture of the king of pop, where the artist has imagined black men as kings, angels, generals, and princes.

“The reality of Barack Obama being the president of the United Statesquite possibly the most powerful nation in the worldmeans that the image of power is completely new for an entire generation of not only black American kids, but every population group in this nation,” Wiley told BBC News in 2012. It is in this vein, it would seem only fitting that Wiley would receive the incredible honor of historicizing for the nation its black president.

In early September, a mutual friend of mine and Wiley sent me a photograph of himself and former President Obama standing before a muted gray backdrop with a message: “Resist. Rise. Represent.” Obama is smiling, wearing a white dress shirt with the sleeves rolled up and black dress pants. In disbelief, and sensing that Obama was being photographed for something, I asked what was it for, he replied, “It’s a special project for the Smithsonian.”

It was in that moment, I realized that Wiley would be painting Obama’s official portrait. Words can’t describe what I felt knowing that a black queer male who has spent his career painting us into the frame of history would use his hands to paint for the nation, one of my hometown heroes. In that moment, the black queer kid in me, who once poured over Wiley’s pictures because they showed men who are like me and who knocked on doors in the dead of a Chicago winter for then-Senate candidate Barack Obama, who opposed the Iraq War, felt seen.

If it was simply a move of political statecraft, this writer believes that a more obvious choice would have been the celebrated Chicago-based painter of black life, Kerry James Marshall. Firstly, because of the Chicago connection. Secondly, the fact that Marshall universally praised as a master painter of fantastical interior scenes of black family, community, and life. Marshall’s art, like his seminal work 1981 self-portrait, Portrait of the Artist as a Shadow of his Former Self, more straight-forwardly and politely deconstructs this idea of black invisibility.

Obama’s choice of Wiley is radical because of the spirit in which Wiley paints his black figures. His early larger-than-life naturalistic images of ordinary gay and straight black men he saw on the streets of New York have undone our expectations around masculinity, straightness, gayness, and race.

He painted black men like in, Femme Piquee Par Un Serpent, for instance, in feminine poses at such an imposing scale that they challenged white supremacist imagery, contemporary Western ideas about blackness, and at the time notions of hyper-masculinity within the black community. Wiley has exhibited worldwide, and his art is included in the permanent collections of many museums including, the Metropolitan Museum of Art, the Studio Museum in Harlem, and the Los Angeles County Museum of Art.

In The Capture of Juliers, a 2006 image inspired by Peter Paul Rubens 17th century Renaissance painting, Wiley replaces Queen Marie de Medici of France with a male sitter, creating a new scene of a black male as a queen in blue jeans. 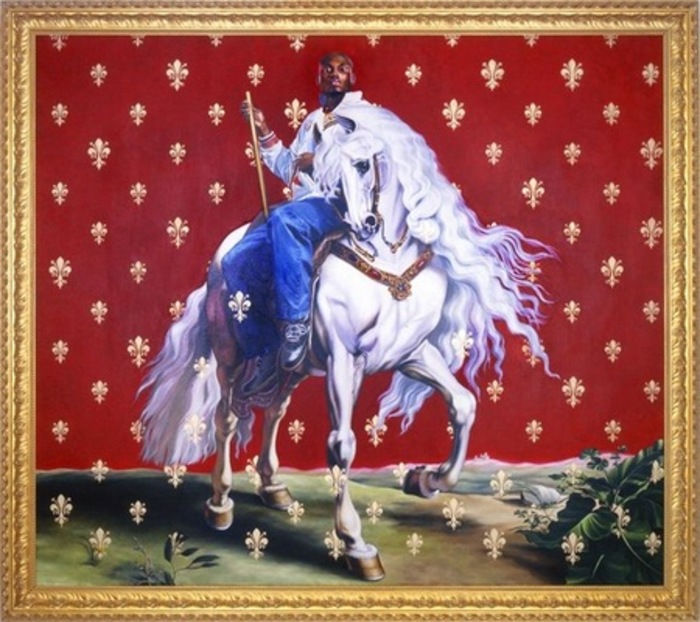 It signifies, for me, Wiley’s quest to see gay and straight men alike, and later women too, as who they are. The heroes of Harlem, the gay queens who defied stereotypes, and glorious pictures of black women. This has always struck me, as a radical not because the painter was making blackness “visible.” Invisible to who? Not each other. We have long known stories of blackness and gayness, in our communities. Wiley’s portraiture has always evidenced that we have a remarkable ability to see ourselves even when others won’t.

In this way, President Obama knowing that he could win the presidency before most of us believed a black man could, is a part of the milieu that black genius artists like Toni Morrison have long considered on the page and Wiley on the canvas.

Whenever an artist is commissioned to create a work of art those works become a part of the legacy of that artist. Knowing that Wiley is a queer artist who has painted his people with a real sense of epic grace and dignity, Obama chose to become a part of Wiley’s overture.