In the latest season of the Bravo TV’s original wives-behaving-badly series, there’s a gay rumor going around the O.C.’s gated communities. Gossip has spread amongst castmates that the husband of Tamra Judgewho is herself blonde and buffis gay. And the pernicious speculation about his sexual orientation is being used to attack the couple.

As a queer fan, it’s disturbing to see a show that reaches well over a million viewers use hearsay about someone’s sexuality as a storyline, especially when it’s intended as an insult. It’s not exactly like I have high expectations, either: Over the past 12 seasons, I’ve watched the 40 to 50-something overly made-up nouveau riche women of the O.C. dump drinks over each others’ heads, accuse one another of being gold-diggers for dating terminally ill men twice their age, and even help their boyfriend fake a cancer diagnosis. And, you know what? It’s been fun. 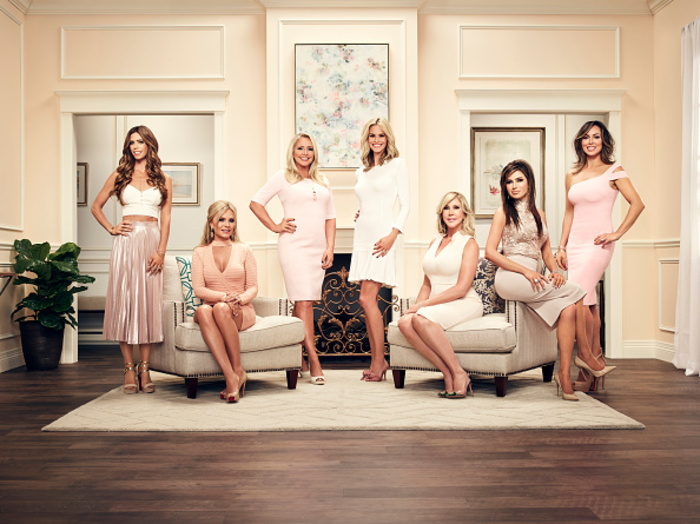 It’s been an entertaining ride watching the Housewives’ dramabecause it’s generally benign. When the Housewives fight with each other, they do so in the confines of their comfortable lives, seemingly untouched by the actual horrors of the real world. No one gets hurt when the wives dress up as drag kings and get spanked at Hamburger Mary’s, then insult each other’s parenting skills over a heated game of bingo. It’s an hour I get to tune out reality and luxuriate in tacky McMansions, cars that cost as much four-year tuition at an Ivy League college, and over-the-top designer outfits (which I live for).

But this season the SoCal Housewives took it a Louboutin-heeled step too far.

For many years of the Orange County series, Judge was best friends with Vicki Gunvalson, the longest-serving cast member of any Housewives franchise. In recent seasons, however, the pair have become mortal enemies, as is customary in a genre of television where people aren’t “here to make friends.” In an escalation of the feud this season, Gunvalson began propelling a rumor around town that Eddie Judge is gay and searching for information to corroborate it. (The Judges have denied that the rumor is true.)

This came to a head at Gunvalson’s 55th birthday party, where she held court at a table surrounded by guests dishing on his alleged sexual escapades. Another ex-friend of Judge, who is himself gay, told Gunvalson that he’d seen Eddie “making out with another man.” Cut to Gunvalson’s on-camera confessional when she gleefully proclaimed, “Tell me more!”

Watching this scene reminded me of the fear I felt before coming out that I would be found outand then rejectedby my friends and family. The Housewives’ literal circle of gossip brought me back to the hallways of my middle school, where students would whisper about someone who was thought to be gay and how he deserved to be socially outcast from his peers. Far from the palm trees and sunshine of Newport Beach, it reminded me of a moment when I was standing next to a row of lockers and staring through the doorway into a classroom where the student sat. One of my friends leaned in and mentioned that he was (like, eww!) gay or bi; she had also heard he had mental health issues.

Whether in middle school or on a reality television show, the subtext of these conversations has always been the same: that being LGBTQ is bad and something for which you should be ashamed.

When speculation about a person’s identity is used to hurt them, homophobia is always at the heart of the matter. It’s not like the O.C. Housewives said they hoped Judge’s husband could come out to live his own truth, nor did anyone say, “Hey, there’s nothing wrong with being gay.” Unlike outing a public figure who espouses homophobic views and is secretly queer, this back-and-forth over “is he or isn’t he?” wasn’t punching up. It was punching way, way downjust another way for Gunvalson to hit back at Judge in their ongoing feud.

Unfortunately, the women of the West Coast are hardly alone in perpetuating anti-LGBTQ stigma. In the most recent season of The Real Housewives of Atlanta, there were rumors that a could-be queer housewife was a sexual predator.

Grammy-winning singer Kandi Burruss’s sexual orientation was a central focus of the show’s ninth season after Phaedra Parks, a well-known attorney in Atlanta, spread a rumor that Burruss and her husband wanted to drug and sexually assault another cast member. At a dinner during a glamping trip (that stands for “glamour camping,” naturally), series regular Marlo Hampton put Burruss on the spot.

“I just feel that there’s real fakeness at this table,” said Hampton, whose website says she’s “your favorite television personality.” “I’ve just been hearing things. I want to know. Kandi, are you a lesbian?”

It’s no coincidence that Hampton’s question came from a desire to expose a “fakeness” around Burruss’ identity. In popular culture, queer womenand bisexual women in particularare often portrayed as distrustful because of the fluid nature of our sexuality. Bi and fluid television characters are relinquished to being backstabbing villainslike Piper, the privileged blonde antihero at the center of Orange Is the New Black’s prison ensemble. Or their bisexuality is viewed as a phase: On The L Word, a seminal show about the lives of LGBTQ women, nearly every bi character couldn’t make up her mind about their partners.

These attitudes are already rampant in the real world: Bisexual people are more likely to remain in the closet than any other member of the LGBTQ community, largely as a result of stigma. Even though reality television may seem like harmless entertainment, studies show that it can serve to encourage real-world harm.

As I watched Hampton put Burruss on the spot, I couldn’t help but think about how many queer women have hidden their sexual orientation for fear they would be ostracized from their group of girlfriends. I know I did. Growing up, I heard friends toss around the word “lesbo” as an off-handed insult and witnessed their disgust when they heard about women who were together. At a time when hooking up with guys promised major social currency, I worried what would happen if I mentioned I was even questioning my sexuality, let alone actually queer. I could be that girl everyone whispers about in the hallway.

I get that the Housewives are no one’s idea of a paragon of virtue. That’s one of the reasons that they’re so much fun to watch. But when castmates begin perpetuating homophobia, the same homophobia that kept so many of us in the closet for so long, it stops being entertaining and starts getting real. The ladies of the O.C. should stick to throwing drinks.