I remember the first time I heard about José Pachini González. I was 12 or 13 and I read his story in a collection of anecdotes from the 1940s by Venezuelan journalist and raconteur Óscar Yanes. His title for Pachini’s story was the sensationalistic “The Wife That Wasn’t a Wife of The Man Who Wasn’t a Man.”

At the time I didn’t know I wasn’t straight. I was just a peculiar, lonely kid who had developed a certain hidden fascination for everything that subverted or defied what was taught to me about gender and sexual orientation in Venezuela in the early 2000s. Of course, the story stuck with me, despite the skepticism of the grown-ups I would ask about it.

Yanes, an old-school reporter known for his stories of bygone Caracas, tells the story with a wink and a nudge, as something funny that happened early in his career. I thought, at the time, that it was very tragic.

The facts go like this: It was 1941 and oil was turning Venezuela’s capital from a sleepy town full of red-tiled villas into a blooming Caribbean metropolis. Bárbara Valenzuela was a 17-year-old girl from the country living in Caracas under the care of Carmen Blanco, probably working as a maid for the Blanco family. Every day José Pachini González, a construction worker in his 40’s, would pass by and bring her flowers.

They got married in September that year, had a small reception with the Blanco family, and went to live in a small house Pachini had leased. On their honeymoon, when Bárbara started to undress, José felt uncomfortable and insisted to his new wife that looking at naked bodies was sinful. From then on Bárbara would change in the bedroom, José would do the same in the bathroom, and they would meet in the bed, with the lights off.

One night, a week after their wedding, José arrived drunk to their home. Unable to undress by himself and despite his protests, Bárbara started to take his clothes off. She soon the saw bandages around José’s chest and as she continued, she discovered her husband’s secret. The morning after she went to a police station and denounced Pachini. He was arrested when he came back for lunch at noon, and by then the press had caught wind.

Authorities at the police station tried to force him to wear a dress and only stopped when he threatened to kill himself. They got reports that Pachini had adopted different names through the years and although he was forced from time to time to present himself as female out of necessity, he had lived as a man at least since he was 15. 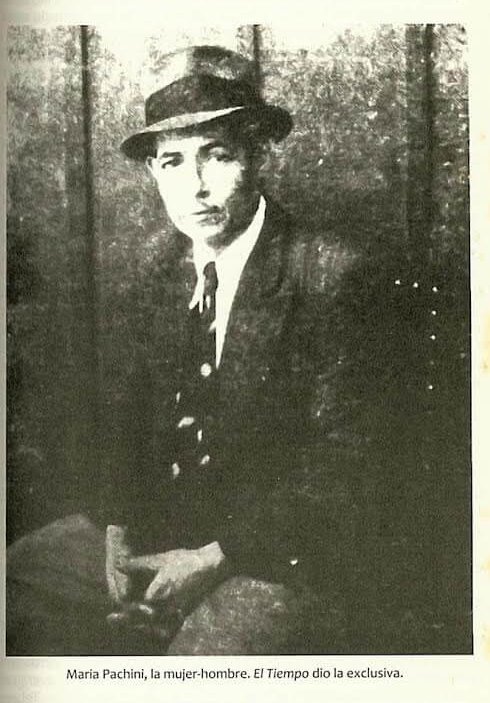 Bárbara left Caracas to escape the harassment from journalists; meanwhile, José had become an overnight source of fascination, curiosity, and ridicule. People of all kinds speculated about their sexual life. Jurists and psychologists pontificated about void marriages and Freud. Authorities requested newspapers to moderate their language.

Hundreds gathered outside the courthouse to gawk at the person whom newspapers called La Mujer Hombre, The Man Woman. Pachini appeared wearing a suit, and Yanes was among those in the crowd. He describes the scene as such: “A huge crowd gathered at the gates of the government building and we all saw the expression of sadness on that poor [man’s] face. Nobody dared the slightest heckle against [him.]”

By the time Bárbara returned to Caracas to testify and accusations came up from a previous marriage, public attention had shifted to politics, baseball, and World War II, particularly the threat of Nazi submarines attacking oil tankers in the Caribbean Sea.

José Pachini’s fate is ultimately unknown. He stepped out of the limelight as quickly and mysteriously as he entered in. He probably just adopted another name and continued to live as a man elsewhere, but it’s hard to tell.

Besides Yanes’s account —which is part of a much larger anthology published in 1989 called Los Años Inolvidables— and a few spare newspaper articles from back then in the National Library, there’s virtually no trace of what could have happened to him.

The few references I could find were a piece from a satirical magazine where the reporter supposedly interviews a transgender woman, or, as he calls her, a “reverse Pachini,” an offhand mention in a play, and an instrumental bearing his legal name. I was unable to find if the song originally had lyrics.

Though figures like Christine Jorgensen and Lili Elbe are often hailed by the mainstream as being “the first” and do deserve recognition due to their visibility, it lends to the myth that being transgender, and being queer in general, is a modern invention.

Before Pachini, there are few reported cases of transgender men in the region such as Enrique Favez, a French doctor who was outed and imprisoned by Spanish authorities while serving in Cuba, and “La Monja Alferez,” a Spanish conquistador who, like Pachini, took different names throughout his life in order to continue living as a man.

LGBTQ history is something very fragile, particularly in developing countries. Colonialism eradicates native expressions of gender and orientation, regulating their bodies and imposing a single, dominant vision, and economic and political instability makes social progress difficult in the face of traditional heteronormative structures.

There was never an Oscar Wilde in Venezuela, or a Stonewall to look back upon and feel proud. In the last two decades the country has seen people like gay artist and activist Daniel Arzola, or trans lesbian lawyer and politician Tamara Adrián, and movies with international acclaim like Cheila and Bad Hair, but they are all very recent.

Instead, we have speculation, gossip, and scattered anecdotes of those who are out and lived to tell the tale, small, flickering lights surrounded by vast darkness. By telling the story of José Pachini, despite all the gaps and imperfections, now one of those lights can shine more thoroughly, serving not only as an example in the past but a validation that we have always been here.

Thanks to Ariana Natalie Myers, Ph. D. Candidate in History at Princeton University, for her advice while writing this piece.