While premium cable and streaming networks have offered up a few shows focusing on chosen families made up of LGBTQ characters, or others with Latinx biological parents and siblings, there is little crossover, and those who do it well can be easily counted on one hand.

What One Day At A Time brings to the sitcom canon with its themes of familial love and Cuban-American tradition, Vida delivers to television dramas. Set amongst the largely Mexican-American community of modern day East L.A., the death of the titular character (short for “Vidalia”) brings her estranged daughters home from Chicago and San Francisco. Emma has been gone for much longer than her younger sister, Lynn, and for good reason.

“She was found when she was 12 years old by her mom, kissing another little girl,” Mishel Prada says of her character, Emma. “Her mom sends her away and then when she comes back, she realizes her mom actually has been happily married to a woman for three years. So, it’s a big soul crushing thing to Emma. She is so not used to dealing on an emotional level that it’s almost like her mother’s death isn’t even really processed with her, because in her mind, the role of the mother died a long time ago when she was sent away.” 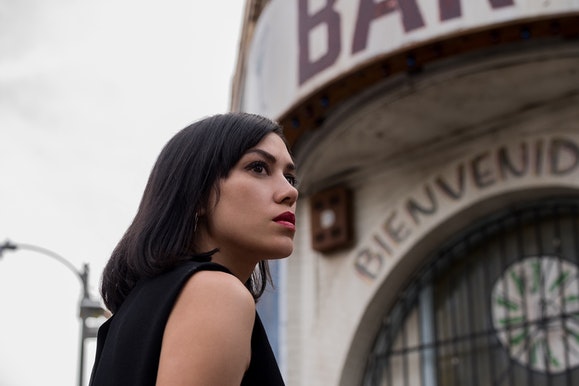 Upon arriving back in L.A., Emma and Lynn (Melissa Barrera) find their mother’s masculine-of-center wife, Eddy, is living in their family home. The bar their mother owned has been flailing, largely because of her same-sex marriage. This is a huge existential crisis for Emma, especially, as has a difficult time reconciling her mother’s homophobia and abandonment with her own eventual coming out. Emma takes it out on Eddy, who is dealing with the loss by drowning her sorrows in liquor.

“She’s essentially trying to be my step-mother and I’m not ready to accept that,” Prada explains. “And not only that, I walk into the house and she’s not only there, she’s welcome there in the house that I got sent away from being exactly what she represents outwardly and there’s a lot to kind of tackle there.”

Eddy is portrayed by non-binary actor Ser Anzoategui. Both tender and strong willed in her dealings with her late wife’s daughters, Eddy grapples with a plan for fulfilling Vida’s wishes for the bar. While has become less and less patronized over the years, it has also become a destination for the local queer Latinx community who are lacking safe spaces elsewhere.

“Eddy is very complicated,” Anzoategui says. “Even though people tend to just think they know her, based on her looking like she may be intimidating, she’s really the heart. Vida was what gave Eddy life.” 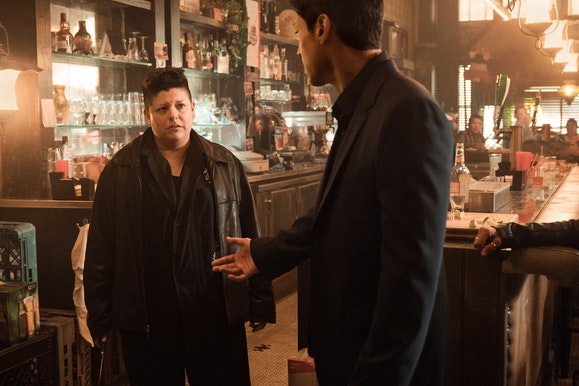 Eddy now seeks to honor her late love by bringing life back into Vida’s bar, but she has to work with Vida’s daughters to make it a reality.

Like Eddy, Anzoategui grew up in established Latinx areas of L.A. and feels very strongly about capturing their respective communities with as much care as Saracho does. This is an opportunity for them as Latinx and LGBTQ creators and artists to portray themselves and their peers with more nuance and truth than has been afforded them before. The characters’ struggles are not just about being Latinx in a gentrifying Los Angeles, or queer in a still homophobic society, but about the kinds of relationships the characters have to their families, their neighbors, the outside (read: straight, white) world, and themselves.

“Eddy represents not just the east side but the LGBTQ community, and the bar itselfthe building itselfis part of that as well, in that it encapsulates not just being Latinx, but LGBTQ and the immigrant community,” Anzoategui says. They note that the street vendors, the activists, and other people who populate East L.A. in both Vida and in life are all part of the larger narrative, a kind of all-encompassing mission to make sure they make good on visibility and representation for an under-served population who are often spoken for or written about by outsiders.

The beauty of Vida is not in its balance of “issues,” but of their integration. The series is unapologetic in its centering on characters whose entire lives could be seen as political, whether they like it or not. In Vida, the personal and political are as connected as they are for marginalized people in real life, and they are rarely given more than a singular storyline on most other television shows that relegate one plot point to a Latinx or LGBTQ character.

Emma’s story is one often gifted to a man. A business woman who has created her own life after being cast out by her mother, she’s a hard shell to crack. She’s not one of the “likeable” protagonists women leads are so often expected to be. She presents as unfeeling, preferring emotionless, tangle-free Tinder hookups (all across the gender spectrum) to committed relationships, and she hardly lets her own sister in, sharing only the most pertinent of information as related to her very business-like dealings with the home and bar.

“Emma comes from a place where she has to learn to be strong,” Prada says. “She was sent away when she was really young so there’s just a lot of pain there an essentially that pain has allowed her to hit walls, distance herself from people. That is a very lonely place to be so she was sent away with her family and then throughout the course of the show, she is forced to come back to face her past and her childhood and the neighborhood that she so desperately looked at rising above in life.” 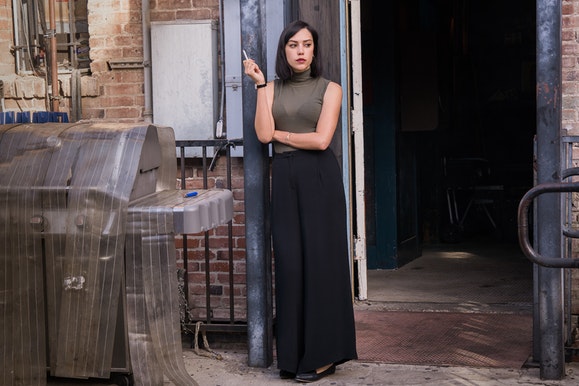 Emma is resistant to Eddy’s attempts at connection, but Eddy is patient and understanding. It’s never quite clear if Eddy knew exactly what transpired between Vida and her eldest, but the eventual relationship developed between them is a comment on the kinds of chosen family LGBTQs find in one another, sometimes surprisingly.

What’s additionally special about this portrayal is Eddy’s being one of very few butch characters on television. As she becomes a de facto motherly figure to Emma and Lynn, the idea of what it is to be a butch womanspecifically, a butch Latinx womanis explored.

While there will inevitably Vida viewers who aren’t a part of or allies to the LGBTQ community, the cast and crew are betting on this kind of representation to help educate as well as entertain the wider audience.

“So many people appreciate Eddy in a way that you would never imagine because you would think maybe they’re homophobic,” Anzoategui says. “It shatters their expectations for the character and I think Eddy is really going to bring people to understand and relate to Eddy in a way they never thought they would.”

At its core, Vida is a family drama that is about finding home, and how that might manifest in unexpected people and places. Its magic is in making the unexpected not only welcome, but a world we can all find a way into.