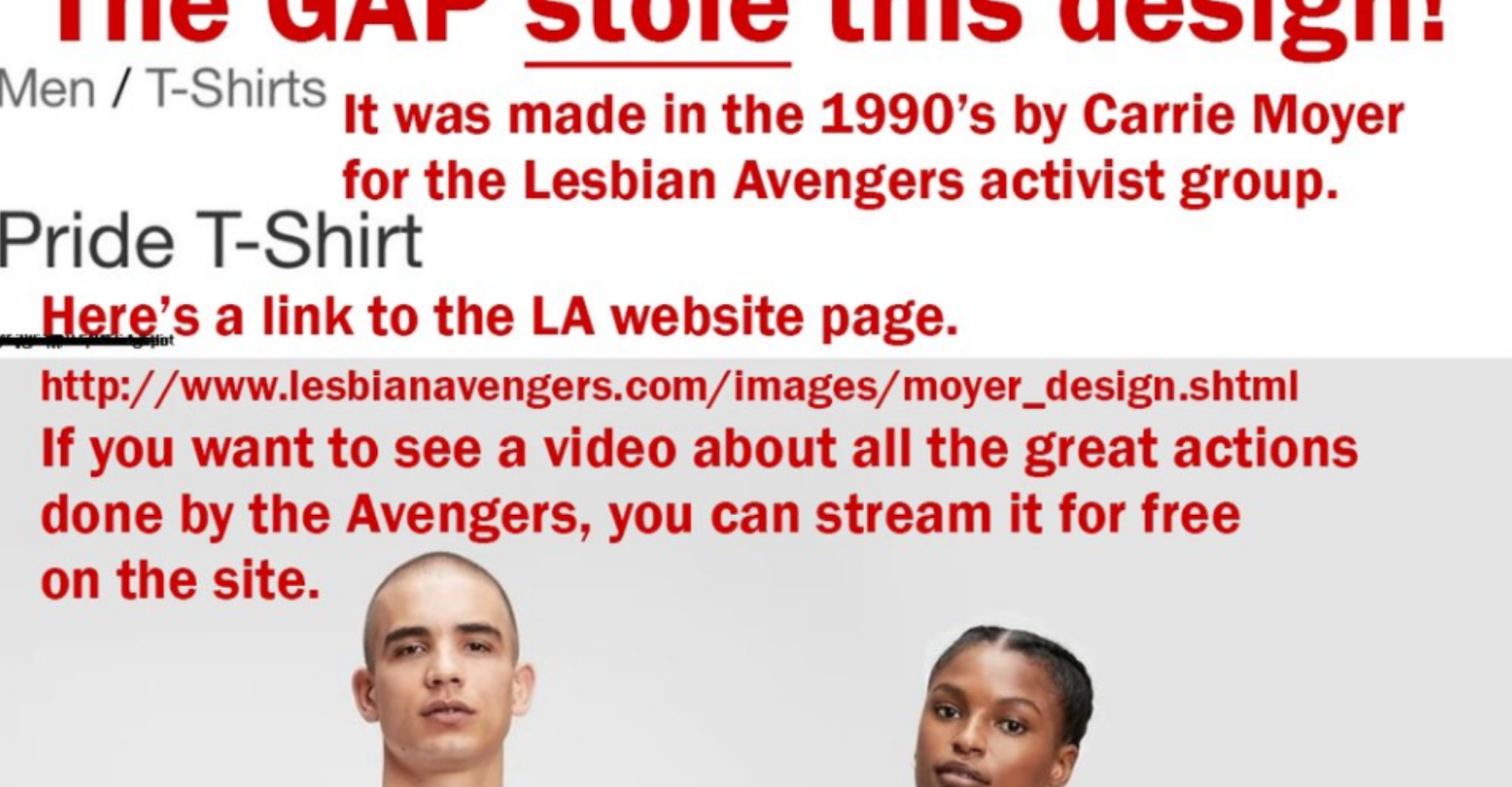 It’s Pride season, and we know what that means: plenty of corporations are saddling up to release rainbow merch in hopes that we’ll buy it.

But while some companies are doing a decent job of tying their merch to activism and awareness, others seem to be taking the easy way out.

This morning, an image of a new t-shirt design on the Gap’s site started circulating on the queer internet. But some found the image on the shirt, a bomb surrounded by the words “Lesbian Avengers,” to be a bit too close to someone else’s work.

Word caught on, and soon, everyone was talking about the real Lesbian Avengers, a direct-action lesbian activist group started in New York in 1992. It was started by six queer women, many of whom have gone onto literary prominence. Activist Maxine Wolfe was there at the start, as was novelist, activist, and ACT-UP member Sarah Schulman. There was also Cuban playwright Ana Simo, Haitian journalist Anne-Christine d’Adesky, and activists Marie Honan and Anne Maguire. The design was made by lesbian artist Carolina Kroon, who is very much still alive and making work.

the gap… did a lesbian avengers shirt… without asking or crediting… the living activists who created it? https://t.co/i2obRCTAEm

The Gap is selling Lesbian Avengers t-shirts for Pride (only $35!) and where is Susie Bannion when you need her, my head could really use an exploding pic.twitter.com/WEVbgWlqq0

Gap: DON NOT PROFIT OFF OF LESBIAN AVENGERS

Everyone else: learn about Lesbian Avengers IMMEDIATELY. https://t.co/Ro1Eg2GxqU

All of these women are still alive and still organizing. They’ve been involved in activism, and scholarship around queer activism, for years. In fact, Sarah Schulman’s incredible history of ACT-UP, “Let the Record Show,” just came out this week.

So what gives, Gap?

You might be surprised (or not) to learn that this isn’t the first time the Gap has been accused of foul play. In 2007, a Brooklyn designer sued the company for plagiarizing her unique zipper design. That same year, they were also revealed to be using child labor to produce items from their GapKids line. In 2014, a customer sued the company for racial profiling. A 2016 ad was accused of having racist imagery, and a 2020 post-election tweet was promptly deleted by the company account after Twitter criticism. And while an urban legend circulated in the early 90s that the acronym “GAP” stood for Gay and Proud, that turned out to be far from the truth.

In recent years, the Gap has partnered with the global campaign UN Free and Equal to donate upwards of $500,000 to support fair treatment of LGBTQ+ folks in the workplace. However, failing to credit another artist’s work (or at least use it to initiate a conversation about the history they’re marketing off of) is a big no-no for a huge business with a host of PR mess-ups in the rearview.

So far, the Gap hasn’t responded to the accusations. While we wait, here are a few great places to start reading up on the beautiful legacy of the Lesbian Avengers: