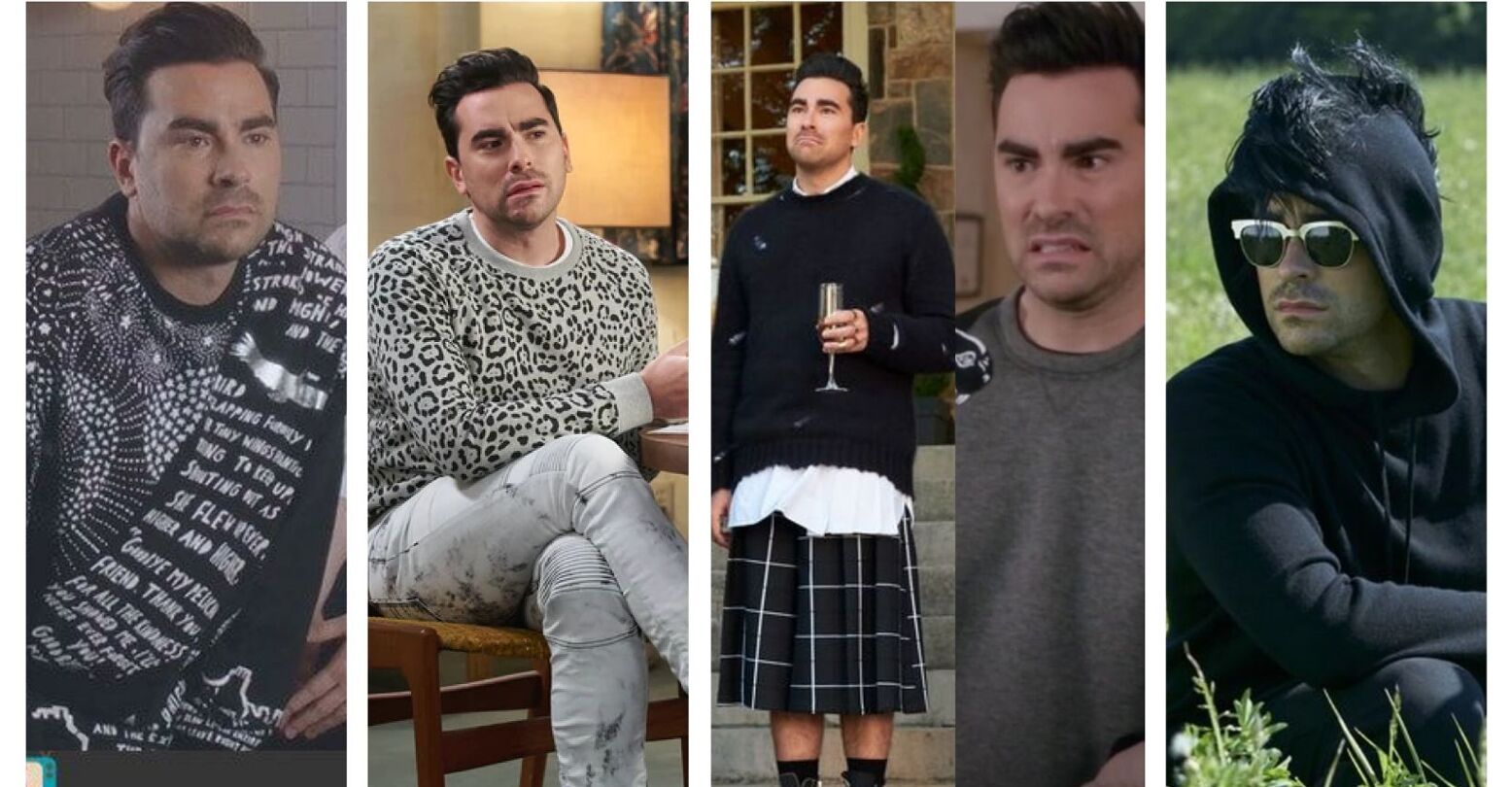 You don’t have to be a hardcore devotee of the cult Canadian sitcom “Schitt’s Creek” to know that its characters have serious style, from Moira’s bizarrely baroque wigs to Johnny’s old-school suits. While the show took a few seasons to build up its cultural cachet, animated GIFs or reaction images featuring its cast of lovable misfits are easy to find everywhere on social media platforms like Twitter.

What’s more, as fans of the program have watched and rewatched its six seasons since it ended last year, some viewers – especially young men – have found themselves inspired by the style decisions of its characters, particularly the offbeat fashion-forward outfits preferred by David Rose, who is portrayed by series co-creator Dan Levy.

A post shared by The Schitt I Knitt… and Make (@theschittiknitt)

From the very first episode of the show, it’s pretty clear that David’s bold sartorial choices stand out in a small town like Schitt’s Creek. Bagged-out shorts and patterned kilts might not seem like the stuff of high fashion to everyday people, but David’s commitment to his monochrome wardrobe and iconic black sweaters made quite an impression on viewers like Alexander Bolas, a young man who lives in Illinois. Bolas made a post on the popular subreddit Male Fashion Advice (MFA) that detailed how “Schitt’s Creek” caused him to start paying more attention to his appearance, and it quickly garnered thousands of upvotes.

From the very first episode of the show, it’s pretty clear that David’s bold sartorial choices stand out in a small town like Schitt’s Creek.

Like a lot of men, Bolas didn’t pay a lot of attention to his style growing up. As a kid, he tended to stick to popular trends that reflected his current clique: combat boots and trench coats for his goth phase, tie-dyes and hemp for his stoner phase. When he began working on a manufacturing floor for his career, however, he felt his clothes were inadequately masculine compared to the old gray-beards who would put in hour after hour without complaint, so he decided to trade his tie-dye shirts for dungarees. “I did my best to fit in,” Bolas tells us via email. “I used Carhartt as a shield.”

When he was first watching “Schitt’s Creek,” Bolas took David’s outrageous outfits as a cheap visual gag; a way for the show to remind the viewers just how far the Roses had come from their world of luxury. Over time, however, he began to realize that David’s lack of concern for how other people viewed his clothing choices was a strength, not a weakness. Now Bolas isn’t afraid to don the sort of attire that suits him. Though he mostly sticks to functional garments and layering to deal with those cold Midwest winters, he also enjoys wearing large hats from time to time, and he doesn’t mind being “that guy” anymore.

“What really sold me was David’s attitude: zero fucks given,” Bolas writes. “His attire became background because he owned it so completely. After several episodes it stopped shocking me. I even found myself wanting one of his ponchos.”

Whereas Bolas used to wonder if he was stereotypically masculine enough to work in a field as demanding as manufacturing, he’s decided to adopt David’s attitude instead. Bolas says he enjoys observing the confident engineers that he works with, who wear designer shoes and loud shirts instead of dungarees and don’t let the machinist old-timers intimidate them. He sees a little bit of David Rose in those men. “That guy is my masculine ideal,” Bolas says. “He doesn’t need to fit in.”

Bolas isn’t the only man who was inspired to up his style game by David Rose. Max Heegard is a thirtysomething MFA user who works in sales. When his wife introduced him to Schitt’s Creek, Heegard realized that he could level up his own appearance with a few small changes inspired by the show. Both David and Johnny style their hair very carefully on the show, and Heegard decided to imitate their example with a slicked-back style, as well as paying more attention to his skincare routine.

“Wearing a kilt and an oversized sweater with holes in it seems like it wouldn’t work for anyone, yet David wears these things unapologetically.”

Though Heegard says that he tends to stick to a more masculine appearance because that’s what he’s most comfortable in, he applauds the fact that many of his friends have come out as trans and queer in the past few years. For example, several of Heegard’s male friends wear makeup and paint their nails regularly, similar to David Rose. Heegard argues that the popularity of queer-friendly shows like Schitt’s Creek and bisexual characters like David has encouraged even straight cishet men to experiment more with their appearance than ever before.

“Wearing a kilt and an oversized sweater with holes in it seems like it wouldn’t work for anyone, yet David wears these things unapologetically and with so much confidence it always just works,” Heegard writes via email. “…I have many friends who are gender-neutral or fluid or trans and I love that everyone is getting more freedom to be themselves these days. It’s great.”

David’s influence isn’t just limited to male-identifying people, either. Veera Warman is a fashion-forward woman who browses MFA for inspiration and discussion alike. Like a lot of style-conscious people, she immediately identified with David’s character thanks to their mutual love for monochrome looks, as well as their shared sexual identity: Warman also identifies as bi/pansexual. While Warman understands why certain people might view David’s style as outlandish, as a person who has followed designer fashion for years, she challenged herself to try to identify David’s outfits based on the style alone, which amused her throughout the show’s run.

“What really sold me was David’s attitude: zero fucks given.”

“If you’ve ever been into designer fashion and not actually grown up in circles where it’s normal for a pair of pants to cost $2000, you’re used to people making fun of your clothes, but you just don’t let it get to you,” Warman says. “When you love fashion you own it, and that’s what David does. He never doubted whether he fit in or felt insecure about himself in terms of what clothes he wore. That kind of confidence was wonderful to see.”

A post shared by The Fashion of David Rose (@davidrosesweaters)

Warman notes that the creators of the show were just as careful to style each Rose in a unique way, with David’s sister Alexis dressing in peppy colors, and Johnny taking great care of his leather loafers. Like the men I spoke to for this piece, Warman hopes that shows like Schitt’s Creek will encourage more people to look outside of traditional norms and aesthetics to express themselves, regardless of their gender or sexual identity.

“I think there are definitely still cultural and perhaps self-imposed barriers (that are influenced by said cultural norms) for men feeling comfortable expressing themselves through fashion and makeup. I can’t obviously speak for others, but it feels like things have gotten considerably more open in the past 5 years or so. I still remember how hard it was for myself to muster the self-confidence to start dressing a bit outside the norm, I can imagine that for a guy brought up around people with old-fashioned values that barrier may feel 100% higher.”

She continues: “Trust your taste and wear what you feel good in, and don’t be afraid to play with proportions and shapes in your outfits…Life is too short to not wear clothes that make you smile.”♦

Steven T. Wright is a freelance writer. He can be found at @madcathedral.