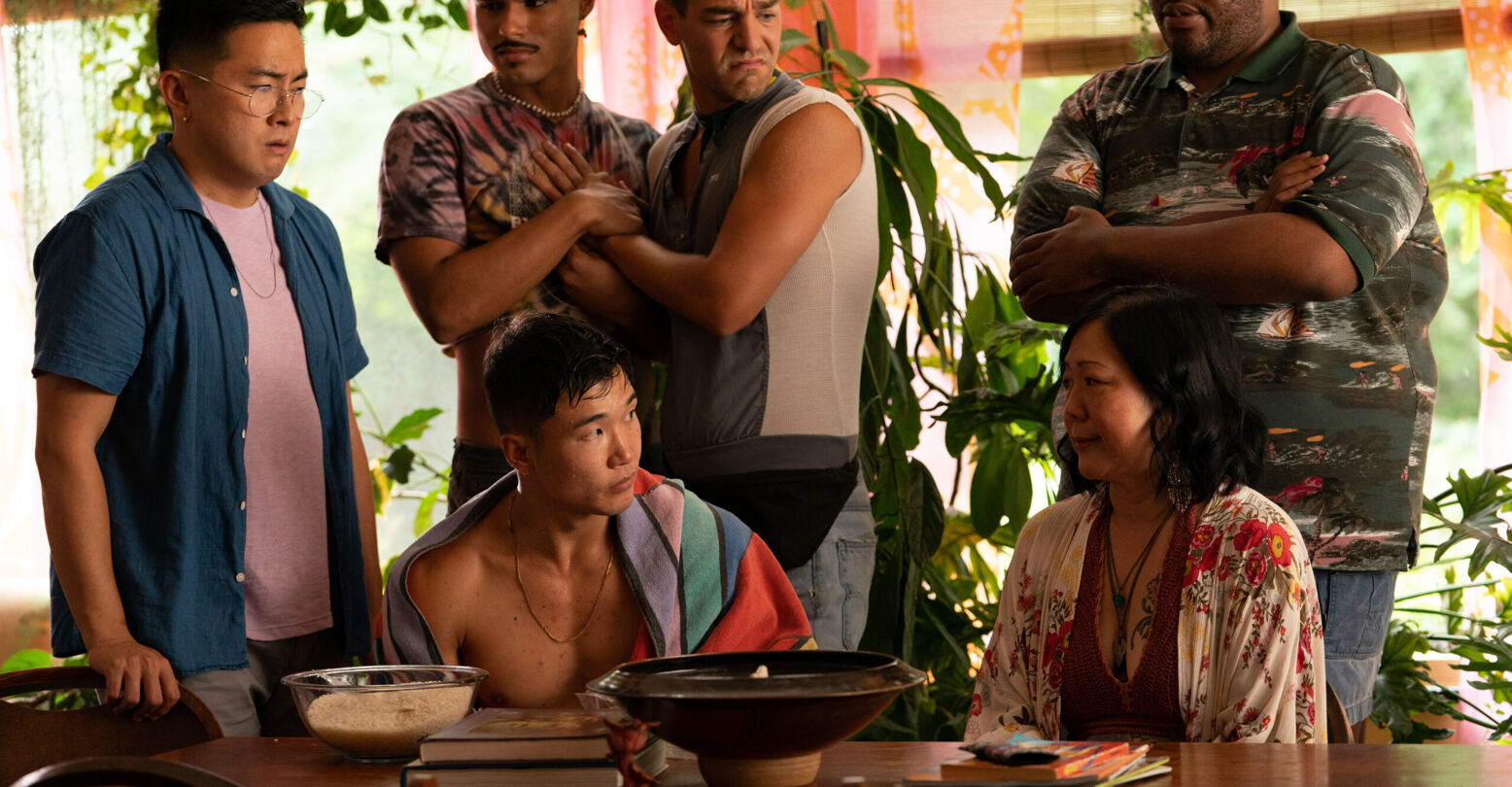 For those who have heard of Fire Island but have never been: imagine it as either heaven or hell, with bodies upon bodies writhing to music on the dancefloor or together on a sandy dune. For many, Fire Island is that. For others, it’s simply a place to go with friends, to embrace the summer fun.

In Fire Island, the new film directed by Andrew Ahn and written by Joel Kim Booster, the island itself exists as something between these two realms. It’s both heaven and hell depending on who you ask, or maybe more like something of a queer purgatory. Taking the structure of Pride & Prejudice and turning it into a tale of queer love—both platonic and romantic—the duo create a dramedy that’s intimate and delightful in many ways.

Related: A queer Asian revolution is happening in Hollywood and, honestly, it’s about damn time

Prior to its release on Hulu, INTO sat down with director Andrew Ahn to discuss the feature, its mythical inspiration, and how Fire Island approaches and emulates both the satire and melodrama of its source text.

So just to start with the basics: this project had something of a wild journey from Quibi series to feature film, so what led you specifically to it?

I met Joel Kim Booster for coffee even before he had written the script for Fire Island in its Quibi form. And I was really interested in meeting him because he’s a queer Korean American writer-actor, and there’s not many of us, so I was really interested in that. We had a great initial meeting but we weren’t talking about any project specifically. Then, a little while later, I’d gotten the script and I think what was so interesting about it was that it was definitely coming from a queer Asian-American perspective, but one that was a little different from my own.

There’s something about that that I find really exciting. Like, I would really hate for Spa Night to be the one Korean American gay thing, you know? My whole thing is that there should be more films, and they should all reflect a different perspective. And this was an opportunity for me to show the diversity of this community. I just loved that this was a film that celebrated queer Asian-American friendship. I think back on my body of work and I’ve never quite gotten the opportunity to talk about two queer Asian people just being friends. After a year of living through the pandemic especially, it felt like a really important and valuable thing to celebrate.

And it being so tied into Pride & Prejudice feels like a natural extension of how the film explores friendship and relationships. So many people either hyper-dramatize that text or turn it into a fluffy rom-com, and while Fire Island has both those elements, it’s ultimately more interested in the relationship between Joel Kim Booster’s Noah and Bowen Yang’s Howie, just like Jane Austen was interested in the Bennet sisters.

Yeah, I think that is kind of the brilliance of Joel’s adaptation in making it modern and making it queer. The focus of the story that a lot of people think of is romance, with the central relationship being between Lizzy and Darcy, but Joel understood that for a modern queer audience, the most important relationship is actually that of the chosen family relationship. That, to me, felt so clear in the script and what Joel’s priorities were, and I linked to that, and the opportunity to work with Joel and Bowen and represent their real-life friendship on screen was a no-brainer for me.

Jumping off that, what was it like to get to direct your very own “gay rom-com”? Did you feel any pressure, responsibility, or this sort of unfair baggage to “get it right”?

Even just considering your question kind of overwhelms me. I think I was aware of it when taking on the project, so I told myself: don’t think about the “significance” of this, but just focus on telling a great story. Fortunately, there was plenty to distract me from just the difficulty of making any film. But it’s definitely something that people and queer media have a lot of opinions about. And I get it, you know? The issue is there isn’t quite enough of it, so we really look at each of these things under a microscope.

“Joel [Kim Booster] understood that for a modern queer audience, the most important relationship is actually that of the chosen family relationship.”

For me, it’s just like, well, let’s keep making work. If we can make more, if we can talk about more, then we can talk about it more honestly and that feels like progress but it’s gonna be an ugly journey. [laughs] But the most that I can do as a filmmaker is to really focus on the task at hand and I was really lucky that I had a great cast and crew.

I think there’s a real intimacy throughout the film – which I think looks gorgeous by the way – that reflects both of these aspects and speaks to your strength as a filmmaker. Just going beyond that though, I’m curious to know how you approached this idea of “Fire Island” cinematically as both this mythical place and also a very real space.

I think, for me, I actually benefited from being an outsider. I came into the production without any of my own personal Fire Island baggage. Obviously, I needed to rely on my team and my actors to find those insights into the island, but I definitely wanted to have a bit of an objective perspective on it. And that allowed me to really find the magic of the place without having to drink the Kool-Aid.

What I was really struck by with the island is it’s such a beautiful natural landscape, it’s so organic; it’s the waves, the bugs, the wind, the rain. But then you have the hyper-constructed social hierarchy of queer people and these super manicured and groomed bodies. It was that juxtaposition that was so fascinating to me that I really wanted to articulate and capture. Ultimately, for me, it was about trying to let go of some of that manufacturing and really enjoy a time and a space with the people you love. That was my North Star as I was making the film, and I think that it was easier for me to come to that conclusion as someone who’s experiencing Fire Island for the first time.

You talk about the juxtaposition of bodies and I wanted to ask you to expand on that. Your past work, like Spa Night, takes a totally different approach, but so much of the film is about Noah and Howie’s relationship to their own bodies and each other, I’d love to know about your approach to the presentation of bodies within this film.

There’s a moment in the bathroom [between Noah and Howie] where they’re arguing and [Howie] points to [Noah’s sculpted] body and says, “You did all this.” And that was something that I would only feel comfortable if Joel felt comfortable calling himself out. I was fortunate that he did and so I always think, as a filmmaker, I’m trying to understand the nuances of how we feel about our bodies and how we’re presenting them. It’s really not an easy process and it’s something that I’ll continue to explore throughout my career.

As for both “calling himself out” and your point about the film being about the juxtaposition of the “natural” versus the “unnatural”, for lack of a better word, so much of Fire Island is sort of discussing class, bodies, and race. So how did you and Joel try to balance both this satirical lens with actually fleshed-out characters that you care about when tragedy strikes?

That’s a great point, and I had a lot of conversations with Joel about the tone of the film because it could very easily have gone into pure satire. I think that would be an effective movie in its own right. But it ultimately felt super important to us that it also felt grounded in emotion and these relationships. My tactic was just to kind of lean into both; I think it’s really funny when Margaret Cho’s character says “girls, we’re broke” and it’s not like her financial status means anything to the gang, but for the Pride & Prejudice of it all, we needed it to be a thing.

At the same time, you need Joel and Bowen’s characters to really go after each other about what makes them different, what their value on the island is, and to have a real heart-to-heart about why they’re even friends. For me, that juxtaposition was something I wasn’t afraid of. Kind of like the island itself—the natural and the constructed—I was leaning into both the satire and the humanity and trusting that that would make for an engaging viewing experience. ♦