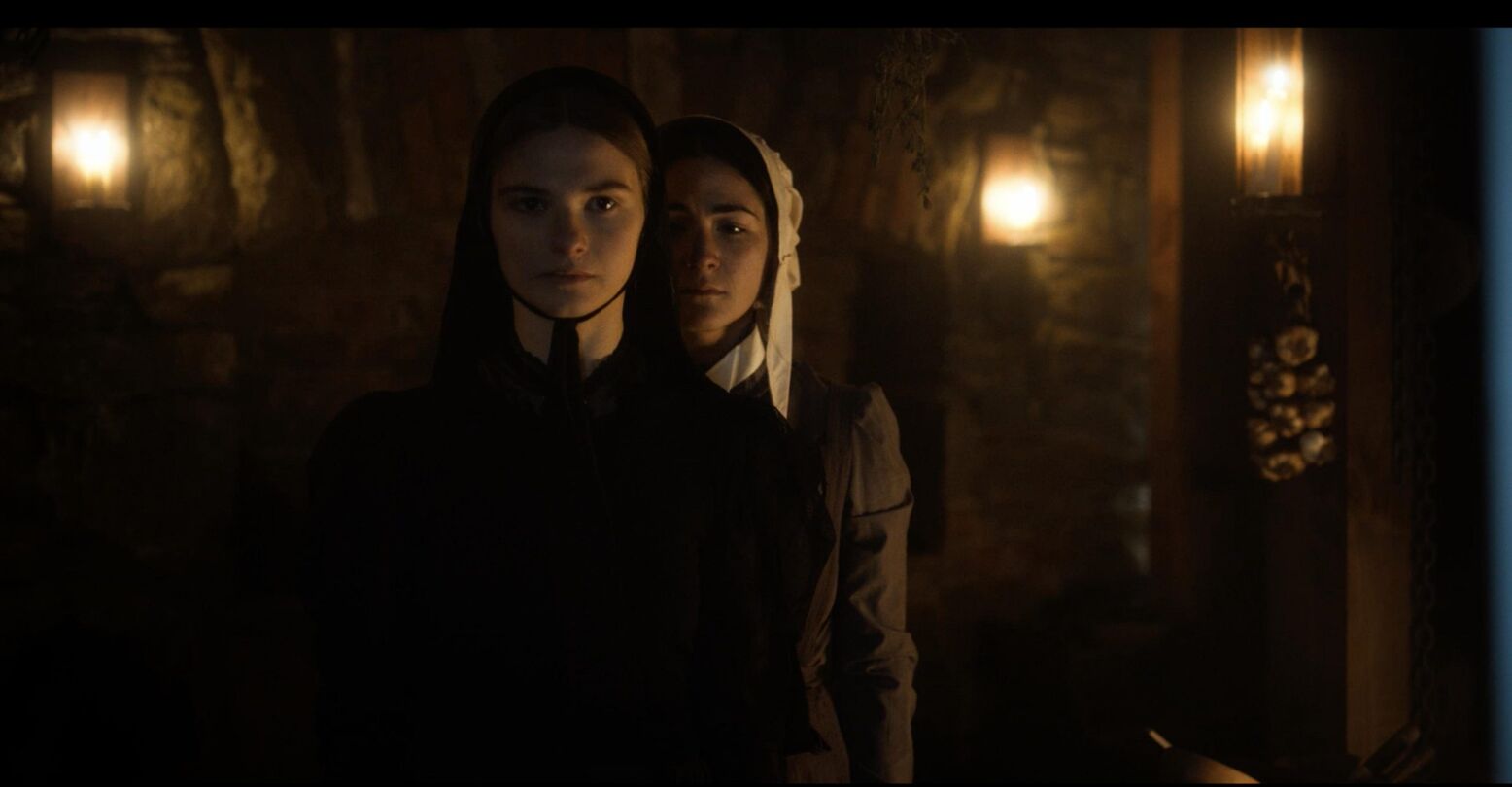 Releasing onto streaming service Shudder, writer-director Edoardo Vitaletti’s feature filmmaking debut The Last Thing Mary Saw is a period piece with a queer twist. In a Calvinist household in the 1840s, two women must escape the cult of family and find a way to be together at any cost. The first-time director spoke to INTO over Zoom about the making of his film, some of his favorite titles from the genre, and the special relationship between queerness and horror.

INTO: Do you have a personal connection or particular passion for horror, have you always wanted to make a horror film? What are some of your favorites from the genre?

EDOARDO VITALETTI: It’s not something I’ve always had. I’m part of the new generation of filmmakers that are lucky enough to start to work at a time where horror movies are really kind of exploding. There’s a new wave of elevated, more drama-meeting-horror that can inspire a lot, so I think my passion and interest is fairly recent. I’ve always been very curious about all the folk stories and the darkness of everything, I grew up back in Italy and during high school part of the curriculum was a lot of Greek mythology and Latin mythology, so I followed how that turns into folklore and so I have a personal passion for that aspect of horror, which definitely made its way into the movie.

Over the past few years, I’ve loved The Babadook, movies like Hereditary, there’s a great Norwegian movie that I always bring up in interviews it’s called “Tell Ma” or Thelma, I’m definitely mispronouncing it, that’s great and I think is one of the better ones that has come out recently – I wish more people watched it. So there are many. But I think it’s just an interesting time, where finally the full umbrella of horror is appreciated in its entirety, it’s not just the slashers, it’s not just the elevated stuff, there are many ways of making a horror movie and there’s so much to glean.

INTO: Queerness and horror have always had such a close relationship. Was that something you were keen to explore with your film?

VITALETTI: It’s something that I learned as I was making my movie, the kind of strong, deep relationship that the queer themes and the horror genre have. I think my inspiration for telling the story was mostly coming from a place of my personal history, where I’m from, and exposing a bit of the very homogeneously Catholic culture that I was raised into. The movie I brought up, Thelma, is also a great movie that explores queerness and has a queer character at its center.  So yeah it’s something that I kind of learned as I was making my movie and I’m very very proud and very humbled to be a part of, in any way, a wave of films that try to explore queerness through the lens of horror, fear, and darkness.

INTO: It’s great to see two queer women as the main characters in your film do you think we’re finally seeing a more definite increase in queer characters leading films rather than simply supporting them?

VITALETTI: Yeah, I mean I would like to think so, that’s definitely something I would like to see. I think there has been and there still is a feeling that when you have a queer character, as much as it can happen with a non-white person, when we’re talking about race, that are always relegated to a bubble of otherness in films. They’re the sidekick, they’re the side character and it just kind of frustrates me. I think that’s part of why it resonated negatively with a lot of things I was taught growing up, like there’s normal and there is the other and that’s just not fair.

“There’s a [new] wave of films that try to explore queerness through the lens of horror, fear, and darkness.”

So I would like to think that we are finally moving towards a time where queer characters get to be the leading characters in their movies and in their stories. For me, the point was to also portray two characters who were not really questioning. I’ve seen a lot of great movies doing great explorations in a very religious context, questioning their own selves for who they are. My goal was actually to just portray two characters who know what they want, they want to be with each other and so I wanted to start a story from there and take it from there without them ever feeling like they’re in an environment where they have to justify themselves. It’s all about them saying, this is what we want here, here’s who we are, and we’re going to go to extreme means to make that clear.

INTO: Why did you want to tell a period horror film rather than a contemporary one, and how did that affect your writing of Mary and Eleanor?

VITALETTI: I was very curious about that time period because many of us are very familiar with the Puritan wave of the 1600s, with the witch trials in the northeast of the United States and so I wanted to not exactly go there, but explore the remains of it. So I took it a couple of centuries after that. In that period historically, there is a great revival of religion in New York state in the mid-1800s. So I was curious about that and I was doing a lot of personal researching visually on a lot of paintings and visual art from the time period, especially from Northern Europe and everything kind of came together.

“I would like to think that we are finally moving towards a time where queer characters get to be the leading characters in their movies and in their stories.”

As far as the writing of the characters, I mean the things that affect the character-building when you’re writing a period piece are things like the accent, the language…a lot of fun that Isabelle [Fuhrman], Stefani [Scott] and I were having was with the body language too. We were exploring a lot of paintings from the time period and trying to kind of mimic them. There’s a certain formality to the body language that’s, sadly, very forcefully imposed on women especially in that time period, and we had fun trying to portray that and showing what it’s like to break out of it, cause when the two girls are together there’s no formality between them. I just wanted to explore their relationship, as this is the first love that they’re experiencing, or that’s at least how we like to imagine it. It’s the insecurity of those around them that make a problem out of it. So the writing of their scenes of when they’re together very much could have been the 1800s as much as the 21st century. I think it’s the kind of beauty and the shyness of your first love and unfortunately what they’re facing is just deeply unfair, but it does stem out of the insecurity of the family around them. So yeah it’s fun to write period pieces, there are a lot of beautiful history rabbit holes you can get down to.

INTO: The film is impressively restrained for the horror genre and especially for a feature debut. Were you ever tempted to lean into the likes of jump scares or were you very conscious in deciding to avoid those genre conventions?

VITALETTI: To be completely honest, I think when you make a movie of this sort, you start off almost being defensive about not wanting to make it too jump-scary and I think that’s just as wrong as wanting to make it too much like that. I think as the process went on, I found a good balance where I would always let the story instruct me on where to go. Like, does this moment need a jump scare or does this moment need quiet? You kind of find your balance. For me, it’s very restrained, and I think because it is a story of the unspoken more than it is a story of the spoken. I think those who speak you would rather not have them speak and not say what they’re saying because it’s mostly the family and the character of the intruder who is very, generally speaking, kind of mean and evil, and they are the chatty ones. I think the girls don’t need words, but I wish I could hear more from them. Their restrained nature came from a place of longing, I feel like it’s easier to want someone to say something when they’re not saying it. The story kind of taught me to lean more into the restrained nature because it is a story about being forced into a behavior, of being forced into a house and doing things a certain way, so I thought an understated style and tone would suit it better.

“I think it’s the kind of beauty and the shyness of first love that  they experience, and unfortunately what they’re facing is just deeply unfair.”

INTO: A lot of your cast has previously starred in other horror films, what was it like working together, and did you learn anything from them?

VITALETTI: Oh, I learned everything from them. I mean it was awesome to work with them. You’re talking about people who are fantastic actors, they are fantastic people and they do have experience in the genre so they kind of know the beats and the timings. There are a lot of rules in the horror genre and I think whether you want to go by them or not, being aware of them is very important, I was dealing with Rory [Culkin], Isabelle Fuhrman, Stefanie [Scott], Judith [Roberts]. They all have done a lot of horror movies, so they came with an awareness for the genre that was really important. That was really helpful. I think as far as overall experience, them being actors who have been working for a while helped me through the process, they helped me enjoy it more because it is kind of nerve-racking to make your first movie and to shoot it in such a tight shooting window. So I was just lucky. You know, in my opinion, casting your movie decides 90% of how your movie is gonna go, so I was lucky to be able to work with people who really delivered for us.

INTO: What is next for you? Are you eager to tell more queer stories?

VITALETTI: Definitely, I mean as far as what’s next, I’m still probably going to be dealing with a similar genre, kind of drama leaning into horror and also period pieces, I can’t necessarily talk too much, specifically. I think if there is a character that somehow I find myself really really attached to, whose story I want to tell, yeah I’d be very happy to explore some of the same themes.♦