It’s been a difficult month for LGBTQ people in Malaysia.

Since the beginning of August, a lesbian couple was sentenced to caning by the Terengganu Shariah court and fined $800 after they were discovered “attempting” to have sex. In response, the Human Rights Commission of Malaysia (SUHAKAM) advised LGBTQ individuals to “exercise temperance and moderation, as well as to keep their lifestyle choices private.”

Claiming that the recognition of trans identities results in “chaos,” Datuk Mahfuz Omar — an official in the Prime Minister’s department — urged transgender people to go back to their “original” gender.

Although prosecutions under Penal Code Section 377A — the law criminalizing “carnal intercourse against the order of nature” — are relatively rare, the Blue Boy nightclub in Kuala Lumpur was raided by police at 1:30 am on Saturday morning.

It’s unclear if anyone was arrested, but at least 100 people were present during the incident.

It’s never easy to be LGBTQ in Malaysia, where six years ago the federal government held seminars on helping schoolchildren identify gay classmates. But officials have increasingly begun cracking down on sexual and gender minorities since portraits of queer and trans advocates were removed from an art exhibition held in conjunction with the annual George Town Festival.

Pang Khee Teik was one of the LGBTQ activists scheduled to be featured in Mooreyameen Mohamad’s Stripes and Strokes series, in which notable figures pose with the country’s flag. In his portrait, Pang is photographed with the “Jalur Gemilang” draped over his shoulders. 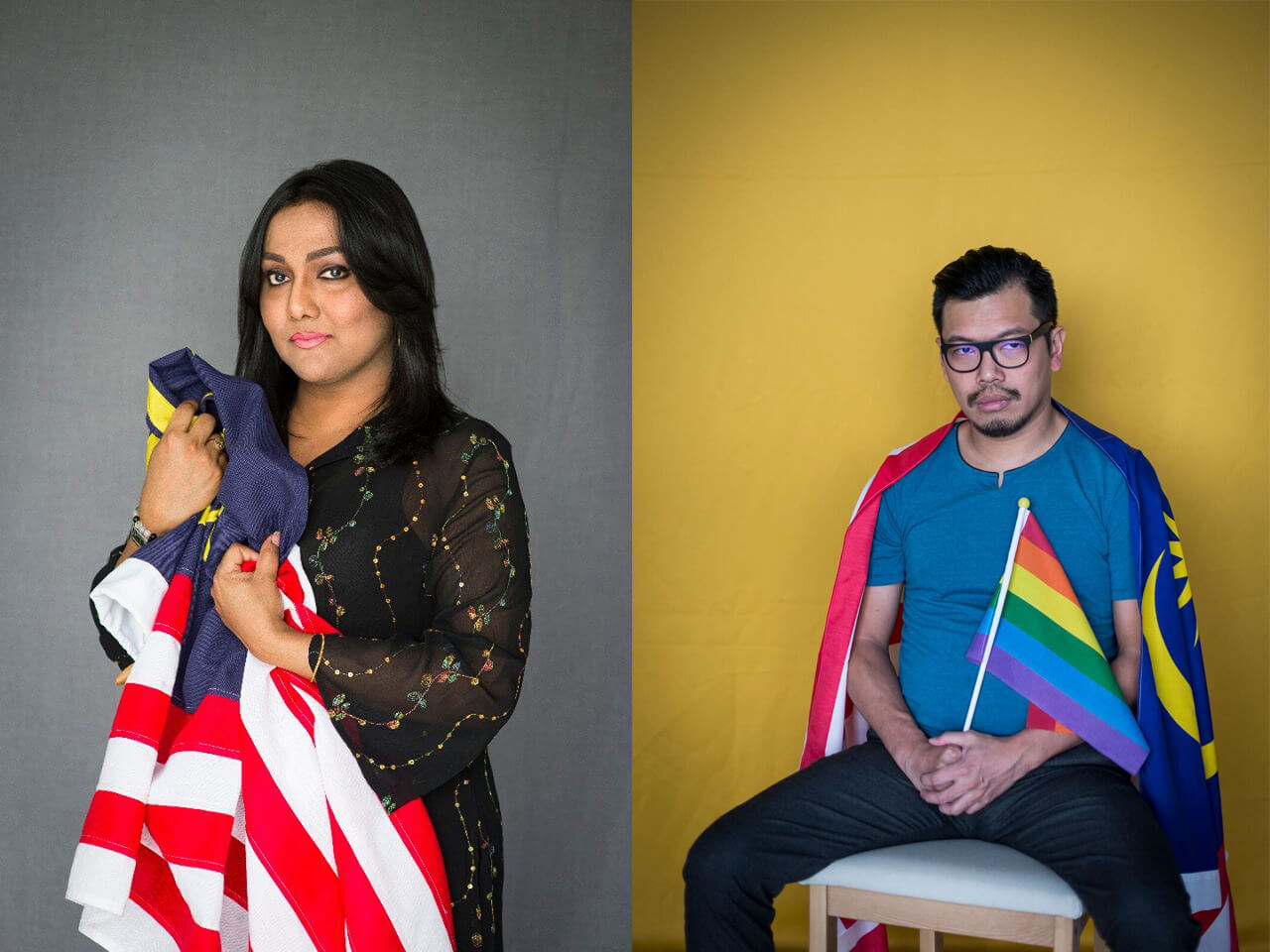 Pang found out his portrait was being removed — along with a photograph of trans activist Nisha Ayub — when the photographer called him personally.

When he was informed of the decision, the thing that upset him most was the thought that the Malaysian government would take “the extra effort to deny [his] presence” in his own country, the longtime advocate told INTO.

“I’m a gay man and an LGBTQ activist,” he claimed in a Skype conversation. “I have done a lot for this country, and I am proud to be among these other Malaysians, whose portraits have been chosen. After all that I’ve done, I don’t even have a place on a wall — I can’t even be a part of the Malaysian picture.”

The action was ordered by Islamic affairs minister Mujahid Yusof Rawa, who claimed the existence of LGBTQ people is “against the society norms and culture, even religion.”

“I think that is not in line with what we have consistently repeated in the parliament and accepted as a policy of this new government,” Yusof said in an Aug. 8 interview with reporters. “If I don’t do anything about it, then it is seen as something that challenges the policy that we ourselves have mentioned many, many times.”

That statement — as well as a subsequent news conference with Nisha — triggered a major backlash against Malaysia’s queer and trans citizens.

Since Islamic leader Mufti Mohd Asri Zainul Abidin responded to the presser by advising trans people to check their genitals to determine which bathroom they should use, social media users have been posting that they would kill transgender individuals if they saw them in public. Nisha reported there had already been one incidence of violence: a trans woman in the Southwestern state of Negeri Sembilan.

In addition to death threats, Pang claimed, Facebook users have been trolling his profile, claiming that he’s “going to hell, that all gays will get HIV, or that [LGBTQ people] are destroying the country.”

The feeling of being under a public microscope is familiar to him. When the yearly arts festival he founded, Seksualiti Merdeka, was banned by police in 2011, Pang would survey the parking lot before walking from his car to the front door of his condo — afraid of who might be lurking in the dark.

“When I saw strangers on the street, I looked at them and wondered if they were the ones who posted death threats,” he said. “It’s really very sad to be thinking that the strangers around you could be the very people who wish you were dead.”

What has given him hope this time around, however, has been seeing the show of support for LGBTQ Malaysians from outside the community. Writer Marina Mahathir, lawyer Siti Kasim, actress Jo Kukathas, and author Bernice Chauly requested their portraits also be removed from Stripes and Strokes in protest of queer and trans erasure, urging others to do the same.

“When one is being discriminated even when one is showing patriotism for one’s country because of one’s sexual orientation, gender and upholding rights for oppressed communities, what hope do we have for the future of this country?” Siti claimed in a Facebook post.

“I think it’s also a testament to the fact that many of us have done a lot of work, in reaching out and establishing connections in building bridges,” he claimed, citing decades of homegrown LGBTQ activism. “We all have different dreams of making Malaysia our home, of making Malaysia the kind of home that protects us and in which we can protect others, a place where we can play a role and be counted and seen.”

The advocate added that this month’s controversies did result in some inroads with the federal government.

The recent press conference between Nisha and Yusof — in which the government official notably shook her hand — was the first-ever public meeting between Malaysian authorities and trans activists. Such a watershed moment was viewed as so unprecedented that religious conservatives responded by calling for the Islamic affairs minister’s resignation.

During the 40-minute discussion, Yusof re-emphasized the government’s position on LGBTQ rights: It does not support homosexuality or trans identities, but sexual and gender minorities should not be discriminated against.

Pang referred to the remarks as “problematic and contradictory” but said they nonetheless represent incremental progress in the Muslim majority nation.

But Pang believes there’s one thing missing from Malaysia’s “baby steps” on LGBTQ rights: the voices of LGBTQ people.

Neither of the activists whose portraits were removed from the George Town Festival — which runs until Sept. 2 on Penang Island — were consulted about the decision before it was announced to the public. Festival Director Joe Sidek claimed he “chose to lose this battle” in favor of the “bigger picture,” arguing that “fighting this demand would trigger more problems in the future.”

But this “was not his battle to lose,” according to Pang.

“He should have at least explained to me what this bigger picture is and if I had a place in it,” he claimed. “Because right now, it feels like the bigger picture he’s fighting for does not include me.”

Nico Lang is a staff writer for INTO, covering news, politics, and global LGBTQ issues.