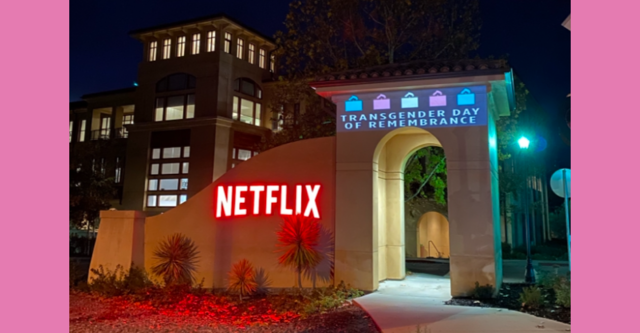 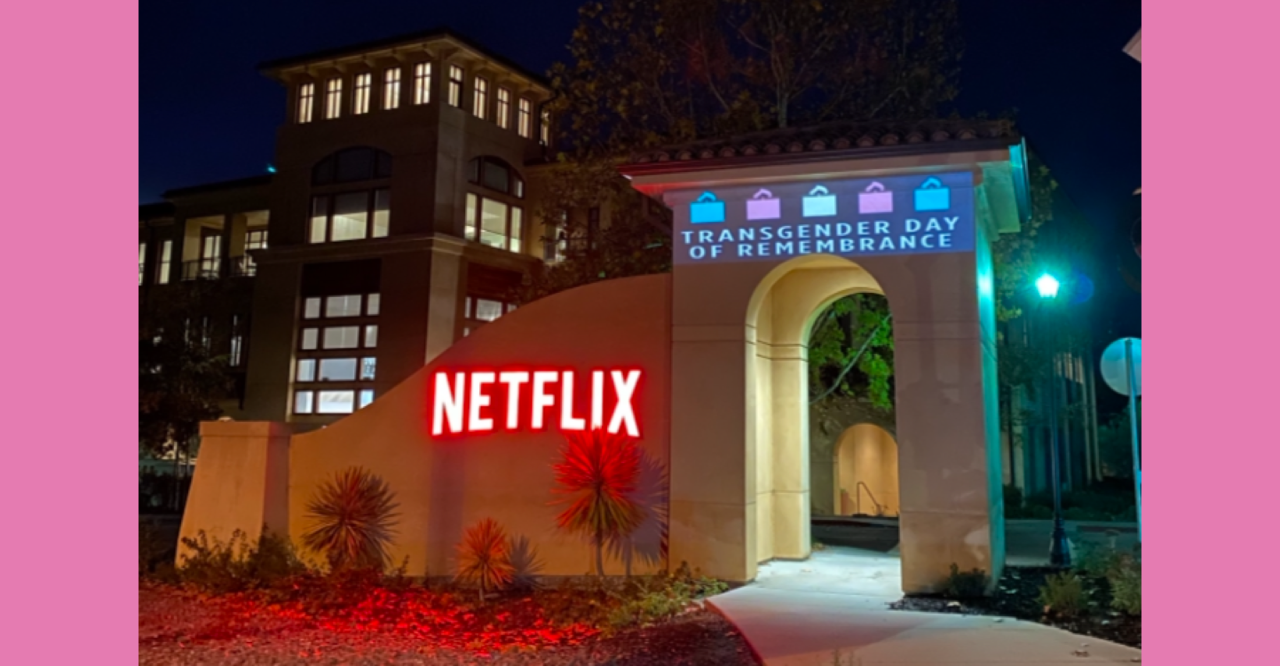 On the Transgender Day of Remembrance (TDoR) this weekend, activists went to streaming giant Netflix and media broadcaster BBC with actions to remind them of the effects of their content.

In Hollywood, organizers bought a simple message to Netflix: on-screen content can translate directly to real-world implications, and their “strong belief” otherwise is disingenuous.

The activists travelled to their headquarters in Los Gatos, California, and projected the name of known trans and gender non-conforming people who lost their life to violence in 2021 onto the building’s entrance. The names were streamed continuously over the company’s logo for about an hour on the evening of November 20.

Gwendolyn Ann Smith, who organized the first TDoR in 1999 in recognition of the deaths of two Black trans women, Rita Hester and Chanelle Pickett, issued a statement sharing news of the action.

“The [co-]CEO of Netflix, Ted Sarandos, spoke earlier this year in defense of Dave Chappelle’s comedy special, ‘The Closer,’ stating that, ‘We have a strong belief that content on screen doesn’t directly translate to real-world harm,’” Smith said.

“It is a fitting rebuttal, therefore, that the names of those who were murdered in the name of anti-transgender violence end up projected on the walls of Netflix’s offices. Perhaps this will serve as a reminder that there are, indeed, real world consequences to consider when you platform transphobia disguised as comedic expression.”

Alan Marling, an author and activist who took part in the action and first shared footage of the projections, also stated, “I cancelled my Netflix account, but I’ll be happy to renew it once the company meets the demands of the walkout.”

The names of those who died to transphobia projected on @Netflix HQ in Los Gatos. #TDOR2021 #tdor #TransDayOfRemembrance https://t.co/edx1dosn9F

This seems rather apt! https://t.co/z9llgeaLO7

Around the world, Transrespect Versus Transphobia Worldwide — an ongoing project by Transgender Europe — has found at least 375 gender-diverse people were killed between October 2020 and September 2021, which unfortunately has surely increased in recent weeks. Altogether, the project has found north of 4,042 gender-diverse people that have been killed since 2008.

Many of their names were included in the projection onto Netflix’s HQ as well.

Across the water in London, similar action was taken by activists in front of the British Broadcasting Company (BBC). About 150 trans advocates travelled to the broadcaster’s BBC Television Centre in West London “to bear witnesses to trans lives lost over the last year across the world – and to drive home to the BBC the point that their careless transphobia was almost inevitably contributing to that loss of life,” Trans Day of Remembrance London said in a statement.

Natacha Kennedy, a sociologist and lecturer at Goldsmith, University of London, took part in the organizing effort and spoke at the gathering. “We were there first and foremost to mark the deaths, many otherwise unrecorded, of some 375 trans people across the world in the past 12 months,” she said.

She pointedly added: “We were also there to send a clear message to the BBC, that the trans community will not be cowed by their bigotry and hatred towards us.”

Several hundred candles were lit on the street outside the Centre and signs such as “Mourn the Dead, Fight Like Hell” were seen.

The group’s statement cites the BBC’s decision to publish their controversial article that promoted claims that trans women attempt to “pressure” cis women into having sex with them, but “the extraordinary decision… to target Brazil, a country with one of the highest trans murder rates in the world, with a Portuguese-language version” of what they refer to as “one of the most inflammatory anti-trans articles they have yet produced.”

“Some very senior figures within the BBC today, including Director General, Tim Davie, and Head of News Fran Unsworth have bought into the misguided theory that in order to be effective, the BBC needs constantly to be ‘offending’ some people,” Kennedy states.

“We are not here because we were offended by the article, but because, by pushing it out to Brazil, a country with nearly 150 recorded murders of trans people this year, you can pretty much guarantee it will contribute to additional attacks on trans people. Even, to murders.”

BBC News has targeted its hate-propaganda at Brazil, the country with the highest number of murders of trans people. This is a transparent attempt to harm some of the poorest, most vulnerable & most marginalised people in the world. Trans people protested this on Saturday. pic.twitter.com/Oe2cIODdl8

The people responsible for allowing the culture to develop within @BBCNews, where someone thought it was OK to do this, are Tim Davie, Director-General, and Fran Unsworth, Head of News.

They should both resign/be sacked. Their actions/negligence are completely unacceptable.

“What started out as a journalistic crime has become a journalistic atrocity, with the BBC literally targeting some of the poorest and most marginalised people in the world in order to meet their managerial goals,” Kennedy proclaims.

While acknowledging she has “no idea whether Davie or Unsworth are ‘transphobic,'” it’s paramount to her that “they are responsible for an organisational culture which allowed someone to decide that it was OK to translate an inflammatory anti-trans article into Brazilian Portuguese and push it out to Brazil.”

Thus, “The buck stops with Davie and Unsworth, they should both be sacked.”

The influx of anti-trans content and organizing in both America and Britain over the last year may have immeasurable consequences on gender-diverse communities.

While it’s unlikely that we’ll be able to prove direct lines between the transphobia promoted by either Netflix or the BBC to the violence people are committing to gender-diverse people, we can surely see that each one is encouraging the continuation of the other.

Activists are continuing to remind people that both need to end, and hopefully more people begin to listen.

Both companies, unsurprisingly, were silent both in regards to TDoR and in response to the actions.