After publishing an op-ed, “The End of Safe Gay Sex?” about the state of the American HIV epidemic in the New York Times, historian Patrick William Kelly spent the rest of the afternoon fighting with other professional writers about the piece online.

It did not go well.

Kelly spent the rest of Tuesday fighting with people online and ended up tweeting out some truly bizarre retorts. Kelly insulted Rich Juzwiak of Jezebel for his extremely thoughtful response to the article, calling Jezebel a gossip rag, probably because misogyny is real and sites that are in any way associated with feminism must just be gossip rags, right?

Juzwiak later tweeted out emails Kelly had sent him claiming he was mad that he was not published in the Times. (Google New York Times and Juzwiak’s name and you’ll see the paper has cited him several times, by the way.)

The fuck is up with this guy. pic.twitter.com/9453fCATPm

When two other academics at Kelly’s institution, Northwestern University, tweeted him about his lack of racial analysis in his piece, he responded with a super professional “fuck off.”

When Kelly responded “Who are you?” to be petty, Steven Thrasher, an incoming professor at Northwestern, responded: “I’m the Daniel Renberg Chair of…wait for it…media coverage of sexual & gender minorities at…wait for it…Northwestern! Where I will…wait for it…research AIDS!”

I'm the Daniel Renberg Chair of…wait for it…media coverage of sexual & gender minorities at…wait for it…Northwestern! Where I will…wait for it…research AIDS! Or listen to this. Or come by my office next year, @prose4321. https://t.co/aAFaZ6XLGw

Award-winning HIV reporter Tim Murphy tried to engage with him as well and was met with snark. Murphy wrote the first landmark piece about PrEP in 2014 for New York, “Sex Without Fear.”

As someone who has been reporting on AIDS since 1994, it really troubles me that NYT published your line "AIDS is no longer a crisis, at least in the U.S." And the way you initially responded to deserved pushback from Black scholars including @thrasherxy says a a lot about you.

Kelly ended up tweeting more insulting things about legendary AIDS activist Peter Staley, who was one of the subjects of the Oscar-nominated film How to Survive a Plague, as well. Since then he’s just tweeted random insults, apologies for being white, and more!

And, just for a little icing on the cake, Kelly seems primed to go full Chadwick Moore. After his conversations online, he says he now has “sympathy” for the right! 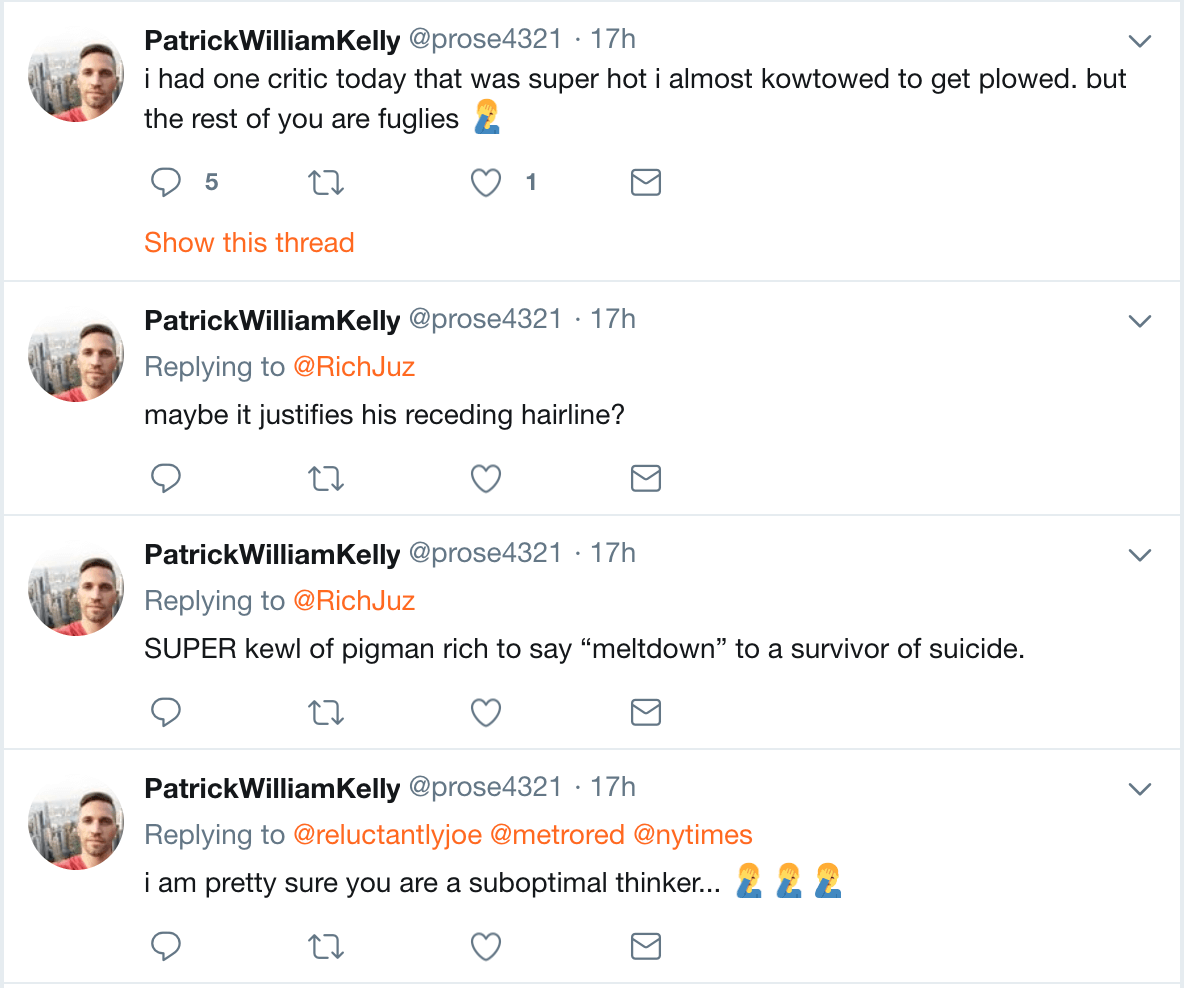