After Donald Trump’s Tuesday morning announcement that the Deferred Action for Childhood Arrivals program would end, former president Barack Obama has released a stirring statement on his landmark executive order.

In a post released to his Facebook on Tuesday afternoon, Obama defended his executive order and condemned Trump’s decision to close the DACA program, leaving 800,000 DREAMers under the threat of deportation.

“These Dreamers are Americans in their hearts, in their minds, in every single way but one: on paper,” Obama wrote.

Obama also wrote that he had hoped that undocumented youth might be helped by an act of Congress, but one never came, which moved him to act. He wrote that he enacted DACA to “lift the shadow of deportation from these young people, so that they could continue to contribute to our communities and our country.”

But, he decried, Trump’s decision has brought that shadow back.
“But today, that shadow has been cast over some of our best and brightest young people once again. To target these young people is wrong – because they have done nothing wrong. It is self-defeating – because they want to start new businesses, staff our labs, serve in our military, and otherwise contribute to the country we love. And it is cruel.”

“This is about whether we are a people who kick hopeful young strivers out of America, or whether we treat them the way we’d want our own kids to be treated,” Obama said. “It’s about who we are as a people – and who we want to be.” 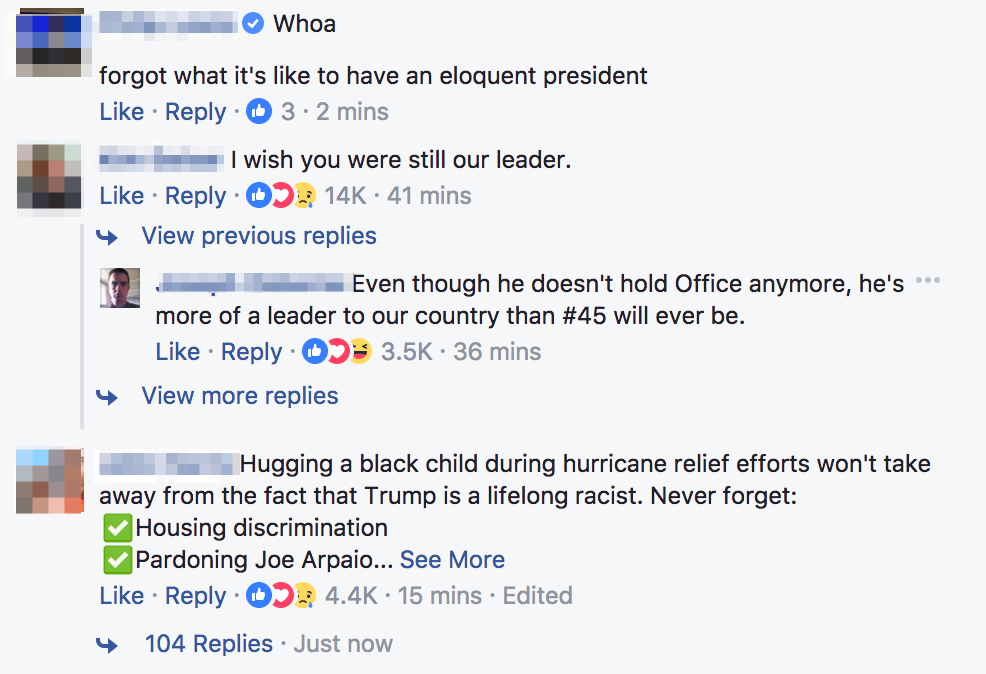 “Whoa, forgot what it’s like to have an eloquent president,” one commenter wrote.

“I wish you were still our leader,” another person wrote. This person’s comment got about 14,000 likes.

In a written statement, Trump said, “I do not favor punishing children, most of whom are now adults, for the actions of their parents.”

He added, “But we must also recognize that we are nation of opportunity because we are a nation of laws.”

Undocumented young people who were registered under the DACA program will now have to wait to see if Congress can pass legislation before the program phases out on March 5, 2018, according to the New York Times.