On National Coming Out Day, LGBTQ people across the United States celebrate the importance of visibility. But this year a surprising group joined the party: conservative college students.

Young Republican groups at several universities held “Conservative Coming Out Day,” timed to coincide with the yearly LGBTQ event. Undergrads at colleges like Texas State University and the University of Northern Colorado gathered to send the message that they are “conservative and proud,” as one student organization wrote in a Facebook post.

“Come out of the closet and show the world how it feels to be a conservative on a college campus,” wrote Texas State’s Young Conservatives in an email to group members.

The events have been met with fierce criticism from students.

The Facebook page for the University of Northern Colorado chapter of Turning Point USA, the school’s Republican group, has been littered with comments from students calling the Conservative Coming Out Day gathering “terrible” and “classless.”

“Have your group and have your free speech by all means, but do not equate conservatives feeling uncomfortable having conversations with the oppression and violence LGBTQ students have and continue to deal with,” writes UNC student Ben Schleiger. “This is a liberal arts college so yes I understand you feel uncomfortable being the minority for once, but do not think you can say your struggles are the same.”

“Students on campus feel this is mocking gays and gay rights,” Scheiger adds in an email to INTO.

.@YCT_TXST , this is classless & insulting to all of the queer people who struggle with coming out and who face immense danger by doing so pic.twitter.com/Iy5Jdr0lSw

In a statement provided exclusively to INTO, vice president of programs at GLAAD Zeke Stokes called the premise of these events “laughable.”

“In the current political climate, where LGBTQ rights and protections are under daily siege by the Trump Administration,” he says, “it is more important than ever to affirm the original purpose of National Coming Out Day, and work toward the creation of safe environments at work, in schools, and everywhere in which LGBTQ people can be their full selves.”

“The idea that coming out as a conservative is somehow equivalent to coming out as LGBTQ is not only insulting, but also reflects a fundamental lack of education and empathy,” Stokes continues.

Turning Point USA tells INTO that the gathering wasn’t intended to be an affront to queer and trans students.

“Conservative Coming Out Day is not an intentional attack on the people of the LGBTQ community,” says Jacob Hale, who serves as treasurer for the UNC group. “Know that we are using ‘coming out’ as a general term. Conservatives on campus have frequently felt like their political voices are silenced, and we want to come together to be with like minded people.”

Hale adds that he is both “gay” and “proud.”

But despite the student’s earnest response, the event appears at least partially intended to provoke a reaction among the Greeley, Color. institution’s liberal student body. A photo promoting Conservative Coming Day on Facebook features students holding signs like “Socialism Sucks” and “Taxation Is Theft.” 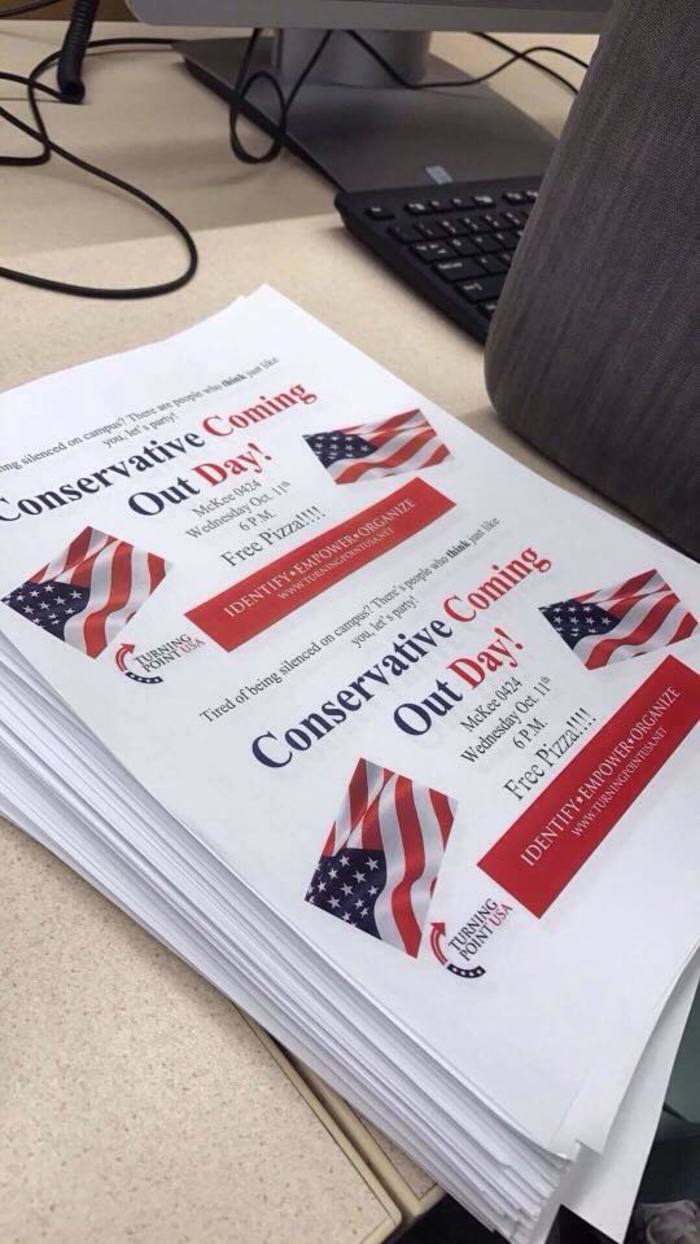 Conservative Coming Out Day, however flawed and incendiary, is a not new idea.

The first LGBTQ coming out observation was held in 1988, organized from the National Gay Rights Advocates offices in West Hollywood. Republican student groups have been putting on their own version since at least 2004, when conservative undergrads gathered in the dining area of the University of Colorado.

That event didn’t try to disguise its mocking tone.

“I started having certain thoughts,” Colorado student Jeff O’Holleran told the Washington Times about his journey toward “coming out.” “I would go out into my mom’s car, turn it on auxiliary, and listen to Rush Limbaugh.”

An event held a year later at the University of Michigan, which was sponsored by the conservative Leadership Institute, likewise took a flippant approach to concept. A letter addressing “closeted” Republican students in Ann Arbor directly lampoons the language of queer narratives: “Maybe you began to realize that you weren’t the same as all the other little boys and girls.”

On the day of the event, campus groups distributed “Conservative Pride” pins with a pink triangle on them. That symbol, which was used during the Holocaust to identify gay men in concentration camps, has since been reclaimed by the LGBTQ community.

An op-ed published in the New York Times points out the obvious problem with appropriating queer imagery for a political stunt.

“Drawing this parallel makes light of the difficulties millions of Americans face each year in expressing their own sexuality and gender identity,” writes the Times in response to the Michigan event. “Conservatives must understand that it is neither humorous nor acceptable to promote awareness of conservative issues by making fun of legitimately marginalized groups.”

LGBTQ students showed up at Texas State’s Conservative Coming Out Day to protest the group but also to start a discussion with Republicans on the other side of the issue.

Emma Brockway, who filmed the interaction on Snapchat, challenged a representative with the Young Conservatives organization about why the event needs to exist. The Republican student, who is unnamed in the video, initially denies that LGBTQ people face discrimination. She instead alleges that her group members face greater marginalization from their families, among their friend groups, and on their campuses.

Brockway presents her with the reality: More than 20 transgender women have been killed so far in 2017, as violence against the LGBTQ community increases under the current administration.

The Senior student claims that confronting the narratives put forward by young Republican groups, even those who may not intend harm, is important.

“I do not think that what she says what meant to be hurtful, and she even expressed support for the LGBTQ community,” Brockway tells INTO. “However, I think this was the perfect example of how ignorance with good intentions can be harmful. When I mentioned the trans women and queer people who fear for their lives every day, she was completely shocked.”

“I don’t think she fully understood all of my points, but I think that sharing my story and sharing hard facts was important and allowed her to see a different perspective,” she adds.