I traveled to Washington D.C. on Monday to let the Trump administration know that my transgender child will not be erased — despite their best efforts. I took the names of hundreds of trans children with me.

James was born 18 years ago in a hospital in the Netherlands. After a difficult delivery, the nurse took one look at his genitals, handed my baby to me, and proclaimed “You have a girl.” “Okay,” I thought, and got on with the work of raising my child. Living in a European country without the American obsession with gender stereotypes meant I did not really think too much about gender. That changed when halfway through middle school in the U.S., my “daughter” informed me he was, in fact, my son.

Pretty soon it became clear that we would — as a family — have to defend his authentic existence in the part of West Virginia that was then our home. The boys’ bathroom was out of bounds for James, and he was forced to use a nurse’s room on the other side of the school. Phys Ed was also not an option, as we were told he would make other boys “uncomfortable” in the locker room. We fought teachers who refused to use the correct pronouns and deadnamed him in front of his peers.

For much of middle school, James was treated like a second-class citizen.

Things improved greatly though as we moved to Maryland, a more affirming state for trans people, and James entered high school. He was finally given the opportunity to be himself. He thrived, and even met with Department of Education officials in the White House to share ways that they could support transgender students. Looking back, those days were filled with excitement and promise for trans youth like James. He formed a Gender Sexuality Alliance filled with over 100 of his classmates, spoke at national and international anti-bullying conferences, and wrote articles about welcoming transgender students in schools. My child was out, proud, and visibly trans, and the world seemed like it was his for the taking.

The night Trump was elected president, James and I sat on the sofa together crying in disbelief. As his mother, I wanted to reassure him that the scary stories about attacks on the LGBT community — and particularly transgender communities — were just hypothetical worst-case scenarios. But the truth is, I did not know myself what was going to happen and I was terrified.

Months later the Title IX guidelines he had a hand in drafting were rescinded. I helped him as he expertly organized fellow trans students, their parents, and allies, to successfully fight for the passage of a comprehensive policy protecting trans students at the local Board of Education. When that policy was legally challenged a few months later, we fought back. We took photos of hundreds of local residents showing support for trans youth and James became an ACLU client. A few months later the lawsuit was withdrawn.

When I woke up last Sunday morning and read the New York Times article about the leaked memo from Health and Human Services that claims “the Trump administration is considering narrowly defining gender as a biological, immutable condition determined by genitalia at birth,” I felt a panic I had never felt before. These plans are an unprecedented and heartless attack on my son’s existence. It contradicts the scientific and medical community’s understanding of gender and flies in the face of everything my son knows himself to be: a proud young transgender man.

Immediately my mind started racing about the consequences should this proposal be enacted. After 16 years of living in the United States, my family became American citizens last year in order to obtain ID documents for James that reflect his true gender. Will the doctors’ notes that once were sufficient to affirm his gender to the U.S. Passport Agency become void? Would that mean they could take his passport away and replace it with an “F” instead of an “M?” Could he be denied health care because the insurance companies will argue that transition coverage is not necessary, or that any doctor is free to deny treatment because discrimination against transgender people can no longer be a thing if transgender people do not exist? What about his right to a job and to housing protections?

James is now a freshman in college, but I panicked about the transgender children who could now — again — be forced to use the bathroom of the sex assigned at birth in schools. Affirming trans children at school, either by using the correct pronouns or allowing access to the bathroom that matches their gender identity, greatly reduces their risk of depression and suicide. Unfortunately, many transgender children do not have the ability to be their authentic selves at school as it is already — especially after the Title IX Guidelines were rescinded last year and the Department of Education halted investigations into discrimination against trans students. A Trump administration directive that erases the very existence of these children would cause further harm to an already vulnerable population.

As a mother of a transgender child, I will not stay silent as our government threatens to erase my son’s identity, an identity he has already fought so hard to defend.

As I was making plans to attend Monday’s rally outside the White House, I read Facebook posts from parents like myself, equally scared about their children’s future, but unable to travel to D.C. “I just want to be able to do something,” they said. “ How can I stand up for my own child?” These parents were from every U.S. state and passionate about their child’s right to exist authentically; instead, they were feeling powerless and voiceless. 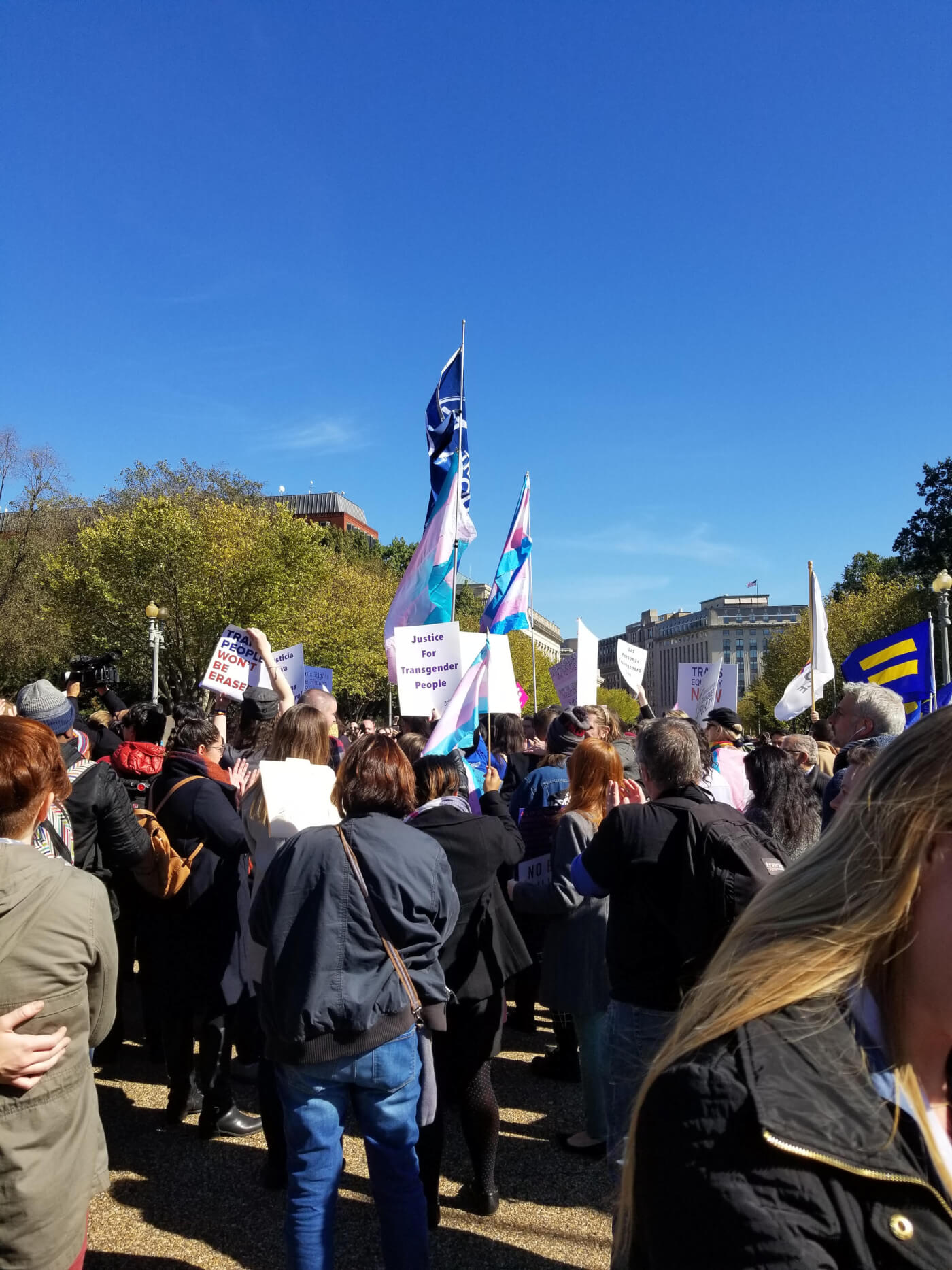 I offered these parents the opportunity to send their trans child’s name to the rally with me, so I could bear witness to their existence. My goal was to fill a sign or two, but instead, name after name appeared. Within hours I had heard from over 800 parents. My son and I spent hours writing the names on poster boards before bed, only to wake up on Monday morning to find hundreds more in my inbox. Parents were suddenly feeling empowered and excited that their children would now have the opportunity to be represented. 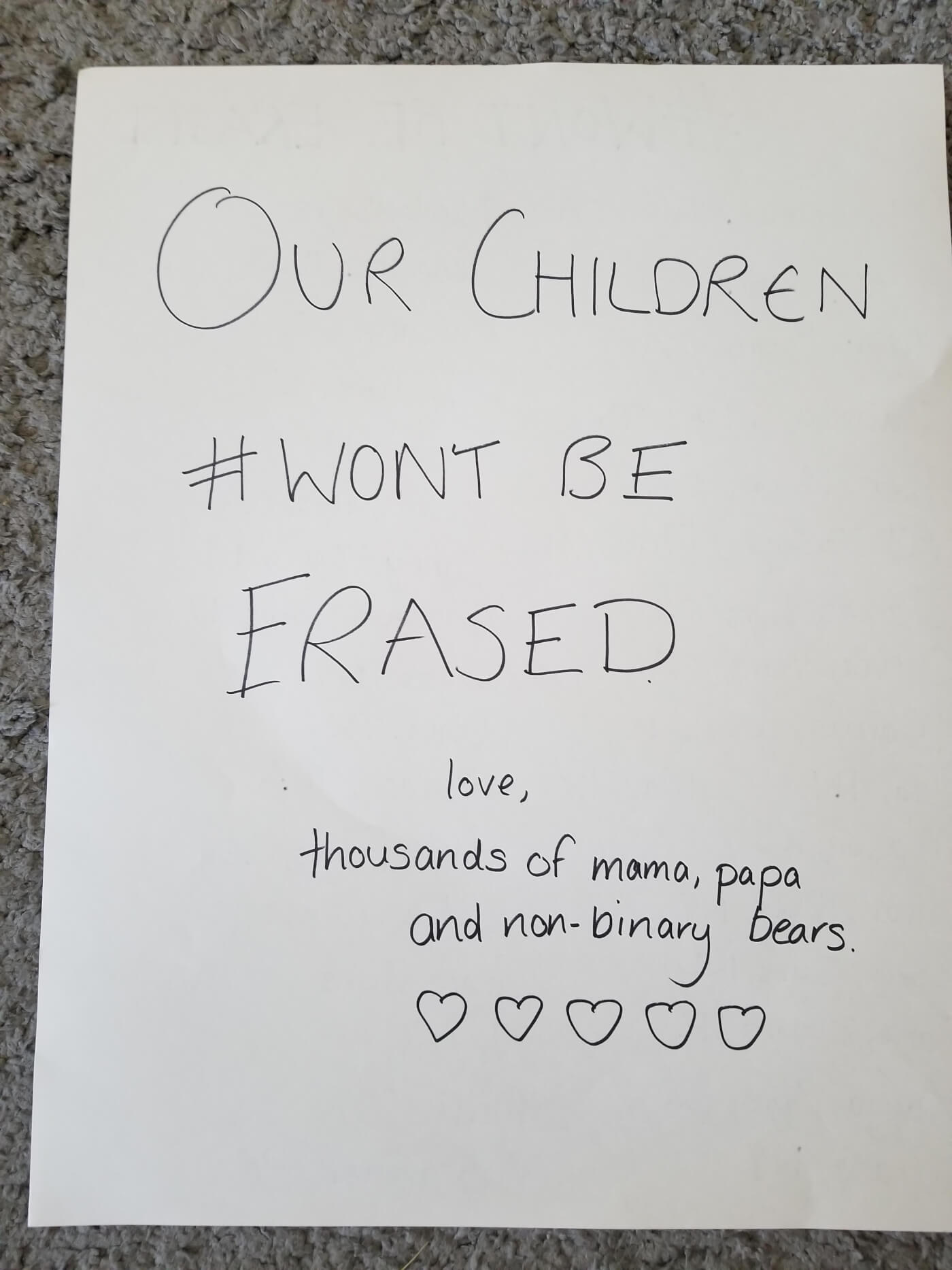 In total, I took eight poster boards — filled with the names of almost 1,000 transgender children — to the White House with me. Other parents and trans gathered in front of 1600 Pennsylvania Ave. to hold the signs. We joined the hundreds of transgender people and allies loudly chanting: “When trans folk are under attack, what do we do? Stand up fight back!” We listened to speakers from various trans organizations around the United States. Mara Keisling, executive director of the National Center for Transgender Equality, took one of our signs and held it up to show the crowd. They cheered as she explained that trans children like James are everywhere. 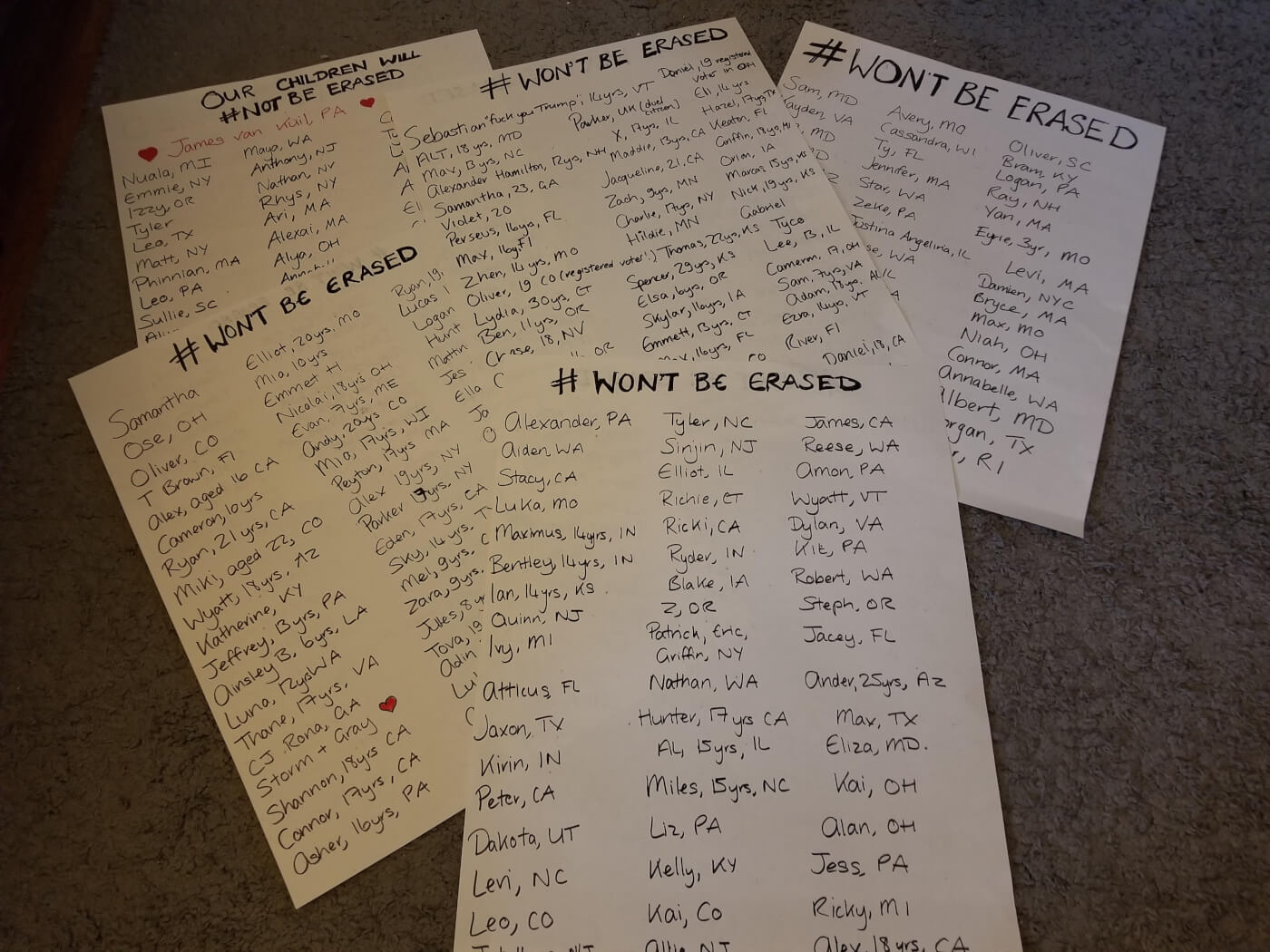 They cannot and will not be erased.