There are few times in your life that a statistician could make you cry. Today was one of them.

Nails were bitten, brows were sweaty, and heart rates were elevated. I stood in the only place I could ever imagine being on a day like today: with my community, as we awaited the much-anticipated results of Australia’s now-infamous postal ballot on marriage equality. In one of Australia’s biggest “Yes” campaign events, Sydney’s Prince Alfred Park, there were balloons, streamers, garlands, and so, so many rainbows. I took them all in as I held my breath. 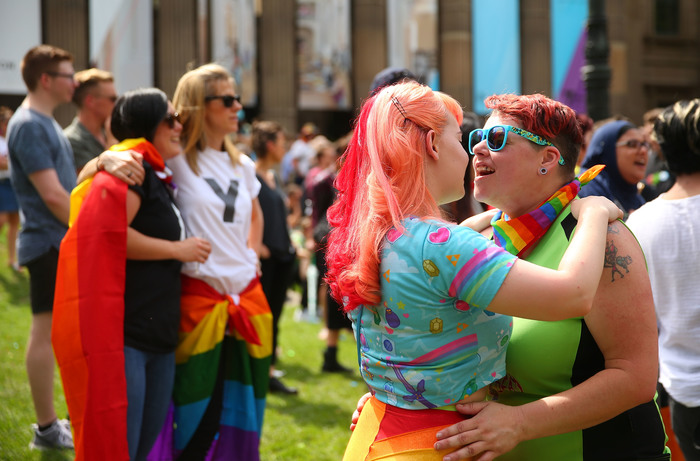 Fresh in our mind, though, was the stage Hillary Clinton had set up to smash through the ultimate glass ceiling of politics as results in the U.S. presidential election were announced. That podiumempty and forlornwas the tumbleweed rolling in the back of my mind as the countdown to our result began. All polls had “Yes” ahead, but we’d been here before, optimism followed by a stupefying coma of anger.

I didn’t want that to be today. I wanted the option of one day marrying my partner.

But this moment was bigger than marriage. Instead of waiting to hear what Australians thought about same-sex relationships, we were about to discover what they thought about us as human beings. Wednesday’s vote was about how valid or equal we deserve to be treated in all walks of life and how many crumbs of humanity should be tossed our way.

It has felt like the world’s harshest popularity contest. Since the non-binding postal ballot was first announced in August, Australia’s LGBTQ community has collectively been catapulted back to our school years, seldom a happy time for this particular generation of queer and transgender people. The jocks and the cheerleaders got to rank the outcasts in a hierarchy based on a system that has always been rigged to put them last.

The fight to get us here was tough. The government, against the wishes and warnings of the gay community, pushed through an unpopular voluntary postal survey that was expensive, toothless, divisive, and damaging. Quite frankly, it was an unforgivable offense. The postal ballot gave voice to homophobia and a platform for hate: graffiti plastered across trains all over the country called us “faggots” and encouraged people to “bash a gay today.” The postal survey became such an international joke that it even warranted its own rant from John Oliver.

But we were in this thing to win it. The LGBTQ community laid ourselves barewith the “Yes” campaign highlighting to voters why this milestone meant so much to us. The marriage movement truly is about equality, a fight to have our love be treated as equally as everyone else’s.

Considering it was an optional survey, the public clearly responded to our pleas. Turnout in the Nov. 15 vote was staggeringly high: eight in 10 Australians participated. “Yes” campaign director Tiernan Brady said this was a “higher turnout than for practically any voluntary ballot measure undertaken in a Western democracy in recent history.” Brady would know. He was flown in from Ireland to replicate the country’s successful 2015 plebiscite, when 62 percent of voters said “Yes” to same-sex unions.

Although we knew participation was massive, the community huddled together yesterday to find out which way that record-breaking vote went. 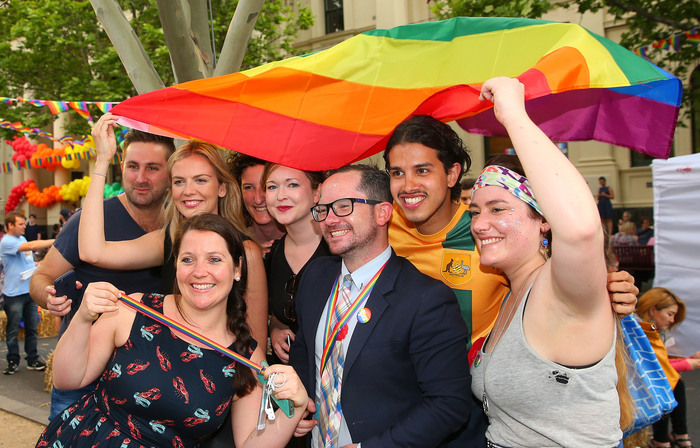 Here we were, getting teary-eyed in a public park as a statistician mansplained the importance of statistics to us. The crowd grew audibly agitated for the results as his speech went on, delaying our months-long catharsis. When he first read out the actual number of “Yes” votes, only those in the crowd who were good at math cheered.

The rest of us finally got the good news a moment later: 61.5 percent of voters cast a ballot in favor of same-sex marriage, while 38 percent voted against marriage equality. To be perfectly honest, it still hurts that nearly 40 percent of the country doesn’t believe I should be treated with the same dignity and respect as everyone else. These voters could be my future employers or my landlord.

But a win is a win. If this were a general election, the result would unequivocally be described as a landslide, as the Equality Campaign reminded us yesterday. It’s hard to view the plebiscite results as anything but an unqualified victory for the LGBTQ community: In a regional breakdown, every single Australian state and territory voted “Yes.” Even the territory with the lowest support, New South Wales, still voted in favor of same-sex relationships by more than a 15-point margin: 57.8 percent to 42.2 percent.

As that magic number was read out Wednesday, the crowd erupted. We hugged, jumped around, and laughed through our screams. One word could be heard over and over again, the very word that now defines this campaign: “Yes. Yes. Yes.”

But suddenly, everything seemed to grow quiet. The celebratory din hushed to an eerie silence. “What was going on?” I thought, that ominous feeling returning to the pit of my stomach. Then I realized: We were silent because everyone was crying. Our cheers had morphed into sobs of relief, exhaustion, and, finally, happiness. After the collective emotional purge, the sea of “Yes” supporters dispersedresting before the night beckoned us to party and dance. 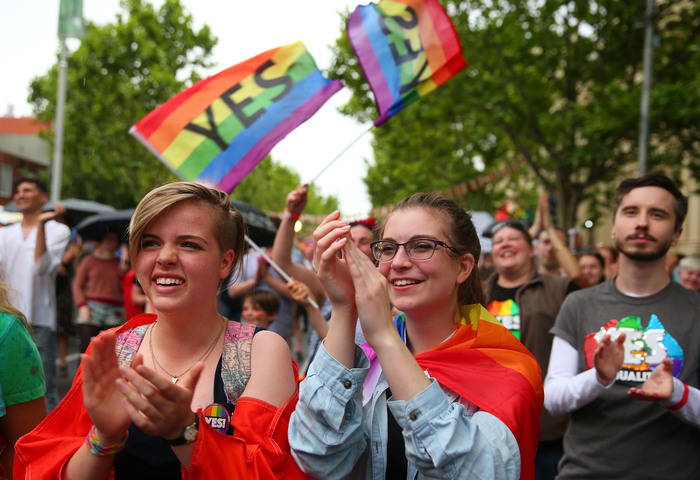 It wasn’t just LGBTQ people who got us here today. The campaign was nothing without allies.

Friends gave up their evenings for months to call strangers and encourage them to vote in favor of my right to marry the person I love. Five minutes before the announcement, one of those friends raced in a taxi and ran into the crowd in Prince Alfred Park to find me. She wanted someone there to hold my hand as the result was read out, and then hug me tightly either way.

In many ways, today’s result wasn’t really for people like me, people who have been around long enough to be confident in our own skin. So many of us have had to fight to love on our own terms for generations. It’s for those in the LGBTQ community who are beginning much earlier in the journey. Queer and trans youth, nervous about how they’ll be treated, may have felt pessimistic about their future or a desire to run from who they are. This vulnerable population can look to the plebiscite as an affirmation they can be themselves and be loved for it.

Now we look to the future: As the survey is non-binding, it does not guarantee marriage equality. A bill has been introduced in Parliament to legalize same-sex relationships, and the Prime Minister hopes to deliver on voters’ wishes by the end of December. This is despite a small number of conservative MPs who are opting to ignore the “Yes” majorities in their constituencies and still vote against it.

As Australia settles into its modern identity as a confidently progressive country, its LGBTQ inhabitants know they’ll have the best Christmas present anyone could wish for: equality.