Thirty-four-year-old Camila* left El Salvador in 2016 because she feared for her life. Her neighbor, a police officer in her town, targeted Camila for being transgender. He harassed her on the street, called her at home, and threatened Camila and her partner with death while armed with a gun.

When she reported the incident to the Civil National Police (PNC), authorities threatened to arrest Camila. She decided she’d be safer in Mexico only to face renewed harassment moments after her arrival in the southern town of Tapachula. Unidentified men in uniform mocked her gender identity, threatened her, and took the money she and her partner brought on their journey.

Almost two years after Camila fled her home country, she shared her experiences with someone willing to listen. Camila’s story is part of Amnesty International’s latest report, “No Safe Place,” which sheds light on the increased violence displacing LGBTQ Central Americans, as well as the continued danger they experience in the face of forced migration.

Central Americans in Guatemala, Honduras, and El Salvador are suffering through some of the most violent conditions in the world. These neighboring nations make up a region along the west coast of Central America known as the “Northern Triangle,” where rising homicide rates, widespread poverty, and organized crime have kept communities in a stranglehold for decades. In 2016, El Salvador had the highest murder rate in the world, and since the 1980s, all three countries have experienced some of the highest numbers of homicides among nations not at war. 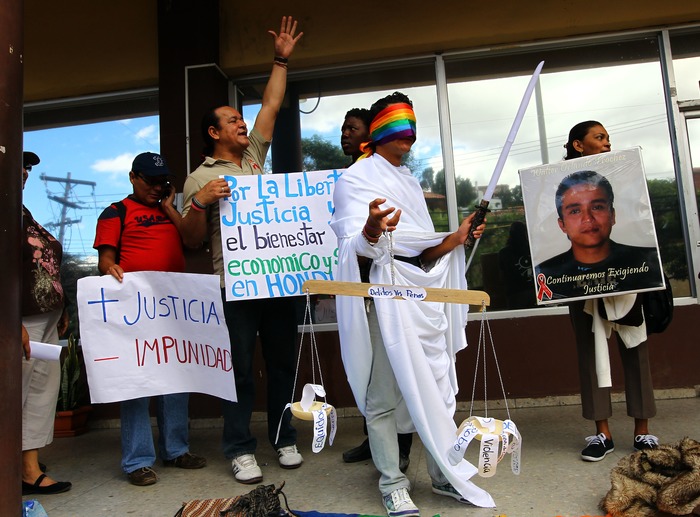 Cristel, a 25-year-old trans woman from El Salvador, tells Amnesty she fled her home country when a gang identified her as trans and threatened to kill her if she didn’t leave within 24 hours.

Carlos, a gay man from Honduras, says that he faced rejection from his family and violence at the hands of local gangs over his identity. When he left Honduras for Mexico, he was detained by Mexican immigration authorities and placed in an overcrowded detention facility where detainees were rarely allowed to leave their cell. Even though he learned his experiences qualified him to seek asylum in Mexico, he was discouraged from formally applying,

Marbella, a trans woman from Guatemala, claims she was kidnapped and sexually exploited by gang members in Guatemala City. Even after she was freed by a police raid, she received threats from the men who abused her and left for Mexico.

These case-studies are emblematic of the violence and abuse LGBTQ Central Americans immigrants experience in their effort to seek refuge. But many never make it to their destination at all.

In 2016 the Washington Office on Latin America (WOLA) reported that714,000 people from the Northern Triangle were displaced due to violence and while those displaced often seek refuge in the U.S. or Mexico, the journey north presents an entirely new set of dangers for immigrants. Over the past 15 years, an estimated75,000 people have gone missing from Mexico and the northern triangle region after emigrating.

When it comes to LGBTQ immigrants from the Northern Triangle, the dangers of displacement and forced immigration can feel compounded by their status as social outsiders. While comprehensive data on the violence faced by queer Central Americans is lacking, firsthand accounts and surveys of Northern Triangle countries document a culture hostile to LGBTQ people.

“The greatest dangers we face are violence, machismo, corruption, and the constant violation of human rights in the countries where we live,” says Alex Castillo, president of the Central American Network for Trans Men. “None of the countries in Central America have laws about gender identity, which puts us on the list of most vulnerable populations.” 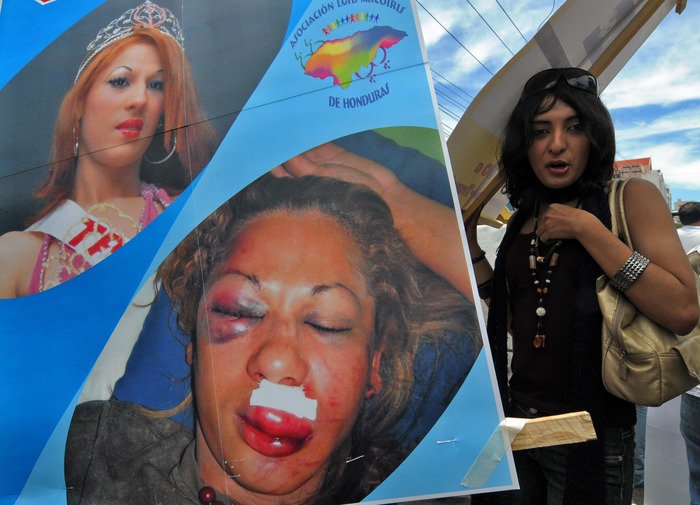 When people like Cristel, Carlos, and Marbella make the difficult decision to leave their homes, it doesn’t guarantee their safety or even a future with better conditions. Traveling to, or being detained in, a foreign country can prove as hazardous as the violence they faced at home.

“We often hear stories of extortion, kidnapping, being left behind by the ‘coyotes’ or caught by immigration in Mexico then either sent back or abused by immigration officers,” says Jennicet Gutierrez, community organizer for the trans immigrant advocacy group Familia: Trans Queer Liberation Movement, in an email.

Much of Gutierrez’s work with Familia focuses on queer immigrants and asylum-seekers caught in legal limbo at the border.

“[Trans immigrants] face all sorts of human rights violations in immigration detention centers,” Gutierrez adds. “They are not given the medical care they need, and many of them do not have the pro-bono legal support they need to be able to fight their immigration cases. We have seen cases of transgender women that spent anywhere from six months to over two years in detention while they fight their cases.”

Extensive research from the United Nations Refugee Agency contextualizes the breadth of Gutierrez’s accounts. According to a UNHCR report from 2016, two-thirds of LGBTQ asylum-seekers interviewed by the agency reported “sexual and gender-based violence in Mexico after crossing the border at blind spots.”

While Americans might be familiar with the increased detentions under the last two administrations in the U.S., Mexico isn’t far behind. A shared border has led the U.S. to exert pressure on Mexican immigration authorities and spur the cycle of violence.

Immigration from the Northern Triangle region reached a peak in 2014, when the Mexican and U.S. governments were forced to respond to an influx of unaccompanied minors and asylum-seekers from Central America. The following year, Mexican detention of Central American migrants at the country’s southern border skyrocketed so much so that in 2015, Mexico deported more Central Americans than the United States.

The amount of unaccompanied children and asylum-seekers that were sent back from Mexicofar outnumbered those deported from the U.S.

Deportations in the U.S. also increased, albeit less abruptly, under the Obama administration. Between 2009 and 2016 the U.S. saw a record number of deportations, earning Obama the nickname “Deporter-in-Chief.” While deportations have fallen under Donald Trump’s presidency, arrests of undocumented immigrants have increased, likely indicating that the “Trump Effect” is filling detention centers while bogging down court systems with non-criminal deportations.

Today Amnesty says they’ve gathered data confirming both U.S. and Mexican immigration authorities consistently deport immigrants unaware of their right to request asylum. In some cases, eligible detainees are deprived of the ability to request asylum at all.

Deportation to their home countries can have a particularly dangerous impact on LGBTQ asylum seekers. Amnesty reports that in 2016, 40 transgender people were murdered in Guatemala. In El Salvador, there were 28 attacks on LGBTQ people between January and September 2017. And between 2009 and 2017, Honduras saw 264 queer and trans individuals murdered. 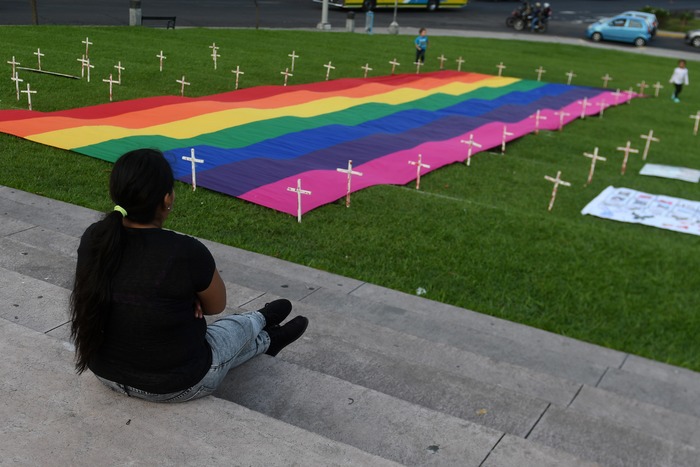 The violence aimed at queer Central Americans doesn’t stem from a single source. While transnational gangs like MS-13 and M-18 might target LGBTQ Central Americans, queer people in the Northern Triangle also suffer at the hands of corrupt law enforcement officials, human traffickers, and even anti-LGBTQ members of the Catholic church.

“The Northern Triangle is invaded by different violent groups that persecute us, attack us, and even kill us,” says Castillo. “We have no access to justice, so it is safer to flee from our countries before seeking protection, because our justice system sees us as abnormal, sick, and depraved.”

Castillo says that corruption and religious extremism make government officials more of a hazard than a help to LGBTQ individuals in the Northern Triangle. Because of their

sexual orientation or gender identity, Castillo says some politicians and justice officials perceive violence against queer populations “as a social cleansing” a phrase queer advocacy groupshave been using to describe apathy toward anti-LGBTQ violence in Guatemala since 2001.

But the future for queer people in the Northern Triangle isn’t entirely grim.

Sandra Moran, an out lesbian, was elected as Guatemala’s first LGBTQ legislator in 2016; Hugo Salinas is an openly HIV-positive gay man who served as the mayor of Intipucá, El Salvador between 2009 and 2012; and this year Kendra Stefany Jordani became the first openly trans woman in Honduras to win a party primary.

Besides groups like Amnesty International, the last decade has seen international advocacy organizations like Human Rights First and the Latin American news organization TeleSur make a concerted effort to center the experiences of LGBTQ Central Americans in their data about violence in the region. For many advocates, that visibility is an important first step in a long journey.

“The current dialogue for asylum-seekers is not fully inclusive of trans and gender non-binary people,” insists Gutierrez. “The majority of coverage in mainstream media is dominated by heteronormative discourse, leaving the issues and struggles of LGBTQ people unheard.”

For many displaced LGBTQ Central Americans, telling their stories is about more than visibility finding a safe place seems unlikely until they’re counted and heard.

Note: Names have been changed where indicated to protect subjects’ identities.