Do you know if conversion therapy has been banned in your city or county? A new resource will help you find out.

As the Movement Advancement Project revealed exclusively to INTO, the nonprofit organization is expanding its tracking on conversion therapy. Currently, its LGBT Map website charts statewide laws prohibiting any attempt to “cure” the sexual orientation or gender identity of queer or trans youth.

Fourteen states have such a law on the books, as does the District of Columbia.

New maps released on Tuesday, however, illustrate that a great deal of the action on conversion therapy is taking place not in governor’s mansions but at the local level.

According to MAP data, more than 45 local municipalities have introduced ordinances at either the city or county level to outlaw orientation change efforts. These totals include 20 municipalities in Florida, such as Miami and Tampa; seven in New York state, among them Rochester and Albany; and six in Ohio, like Cincinnati and Toledo. 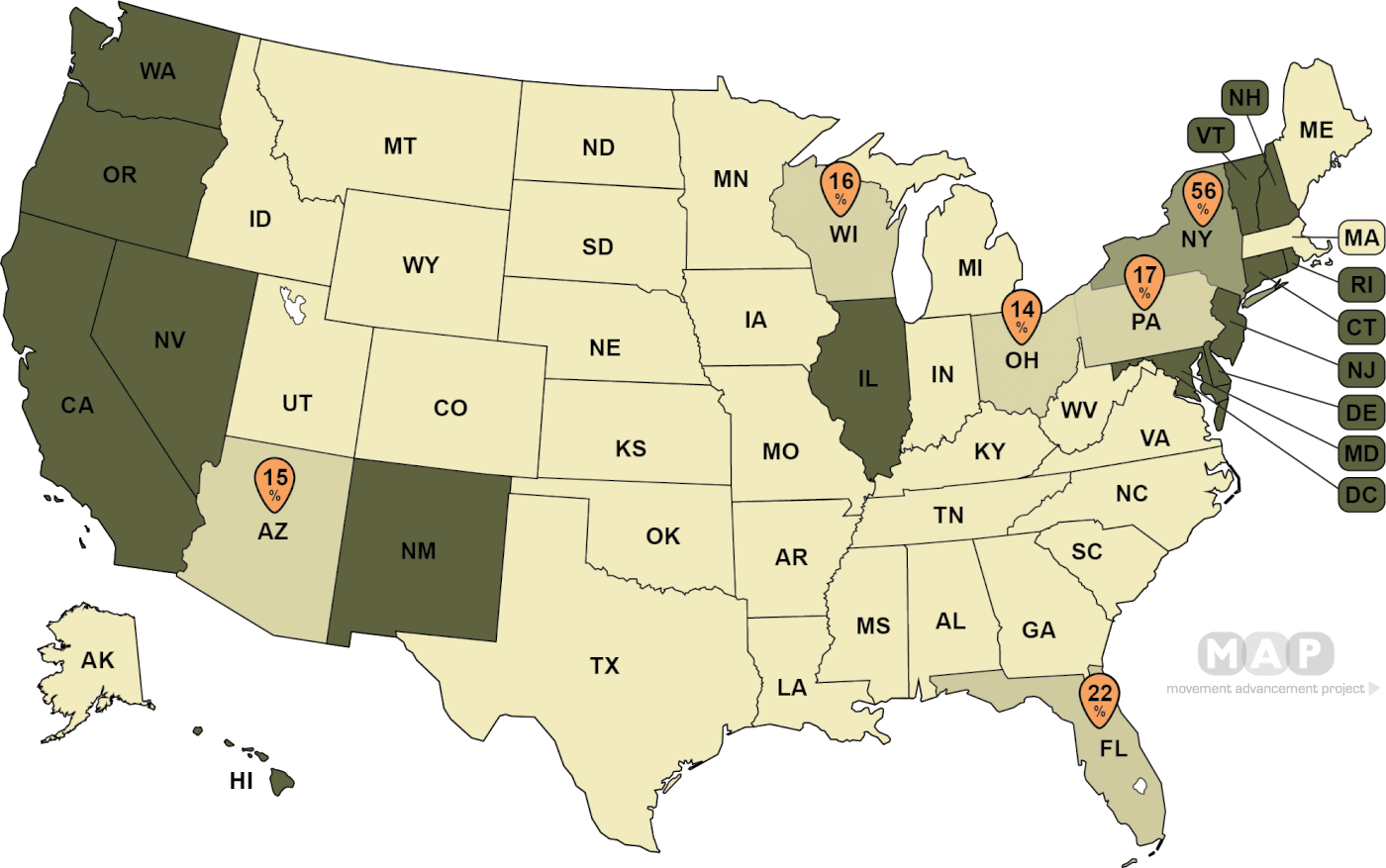 Last week, the Cleveland suburb of Lakewood became the latest city to bar conversion therapy following a unanimous vote from its city council.

Logan Casey, a policy researcher for Movement Advancement Project, said these maps illustrate the importance of passing local laws to ensure that every LGBTQ youth is protected from the widely discredited practice.

“For example, in Arizona, Ohio, Pennsylvania, and Wisconsin, local efforts have made sure that more than one in seven people in each state are now protected against conversion therapy by licensed professionals,” he said in an email. “In Florida, that number is nearly one in four, and in New York, it’s more than one in two.” 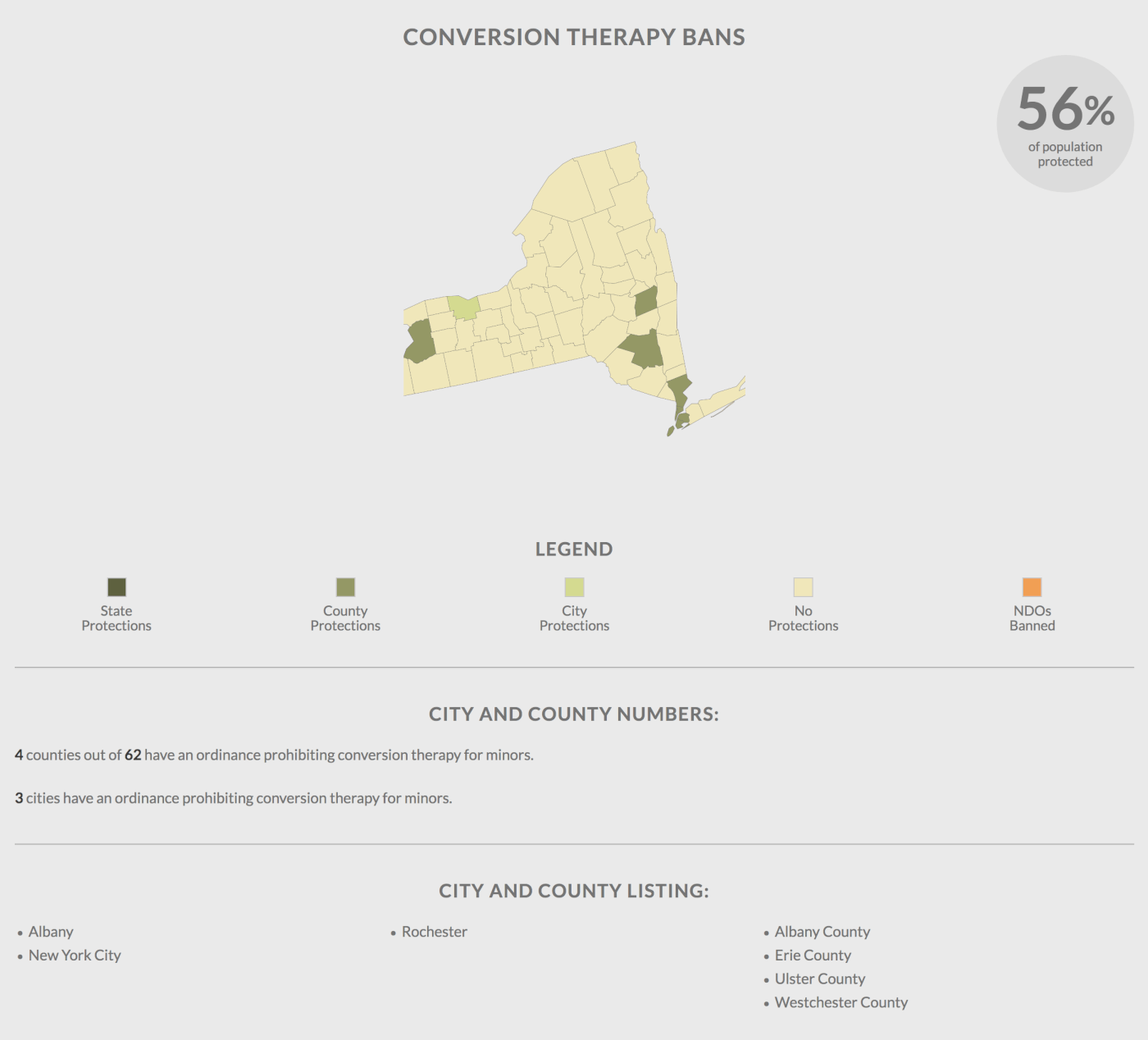 Previous research from The Williams Institute, UCLA’s pro-LGBTQ think tank, has illustrated the gravity of these efforts. Over 80,000 LGBTQ youth will reportedly be subjected to conversion therapy before they turn 18.

Overall, more than 700,000 U.S. adults have undergone some form of conversion therapy at some point in their lives.

“Whether you are growing up in Manhattan, Kansas or Manhattan, New York, you deserve to be protected from the dangerous and discredited idea that your sexual orientation or gender identity can be forcibly changed through conversion therapy,” Brinton, who serves as head of advocacy and government affairs for The Trevor Project, told INTO.

Brinton, who is nonbinary and uses gender-neutral pronouns, underwent physical aversion therapy and electroshock therapy while growing up in Kansas. They remembered their therapist telling them God had “killed off” all gay people as punishment for bringing “AIDS into America.”

To ensure other LGBTQ youth don’t have to experience the same thing, Brinton founded the “50 Bills, 50 States” project to ban conversion therapy in every community.

These new maps, Brinton said, are proof the campaign is working.

“Nearly every week, another local ordinance speaking up for the health and dignity of LGBTQ youth is voted on to remind youth they are not alone and that they are worthy of love and respect,” they claimed.

The graphics will be available on the LGBT Map website.

Casey hopes community members and politicians will use the maps not only to educate themselves but to push their municipal governments to take further action.

“This allows residents of each state to easily see if they or their children are protected, and hopefully also helps advocates and elected officials in each state see where they can look to for models of towns that have successfully implemented these protections,” he claimed.