Last Friday, June 1st, Lynn Zelvin was denied entrance to the legendary New York bar Stonewall Inn. Zelvin, who is blind and has used a guide dog since 1999, was told by a bouncer she could not enter without providing proof that her dog was a service animal.

The bouncer at The Stonewall Inn refused to allow Zelvin, a lesbian who uses they/them pronouns, access to the bar despite their attempts to explain he was in violation of the Americans with Disabilities Act (ADA). Zelvin’s friends recorded the full incident, including the repeated attempts to educate Stonewall Inn staff about how denying Zelvin access was illegal.

As Zelvin tells INTO, this is not a new law they were confused about. The Americans with Disabilities Act was signed into law in 1990, but public access for Guide Dogs has been protected in New York long before that.

Stonewall staff asked Zelvin for an ID card (something illegal to ask for, and something that the government doesn’t issue), and ultimately never allowed Zelvin into the bar that night.

The ADA clearly states “privately owned businesses that serve the public, such as restaurants, hotels, retail stores, taxicabs, theaters, concert halls, and sports facilities, are prohibited from discriminating against individuals with disabilities. The ADA requires these businesses to allow people with disabilities to bring their service animals onto business premises in whatever areas customers are generally allowed.”

The ADA regulations go on to dictate that “When it is not obvious what service an animal provides, only limited inquiries are allowed. Staff may ask two questions: (1) is the dog a service animal required because of a disability, and (2) what work or task has the dog been trained to perform. Staff cannot ask about the person’s disability, require medical documentation, require a special identification card or training documentation for the dog, or ask that the dog demonstrate its ability to perform the work or task.”

Zelvin and their friends attempted to meet with a manager of Stonewall, but says he refused to come outside and speak with them. Today, the Inn provided INTO with a statement:

“This was clearly a mistake on the part of our security person. We never want anyone to have a bad experience or be mistreated at Stonewall. Everyone of age and with proper ID is always welcome. We are taking steps to ensure this never happens again and that our security company is made aware that this particular employee must be educated on our policies. We will insist that everyone affiliated with Stonewall understands the laws regarding service dogs.”

Zelvin tells INTO they have had many access challenges with LGBTQ businesses during those years. Zelvin described repeatedly being denied access to LGBTQ bars across New York city from Manhattan to Queens, and about how blind LGBTQ friends who use guide dogs regularly have similar experiences. Zelvin recounted how on one night at a different bar a bouncer relented, saying, “I’ll let you in, this time.” 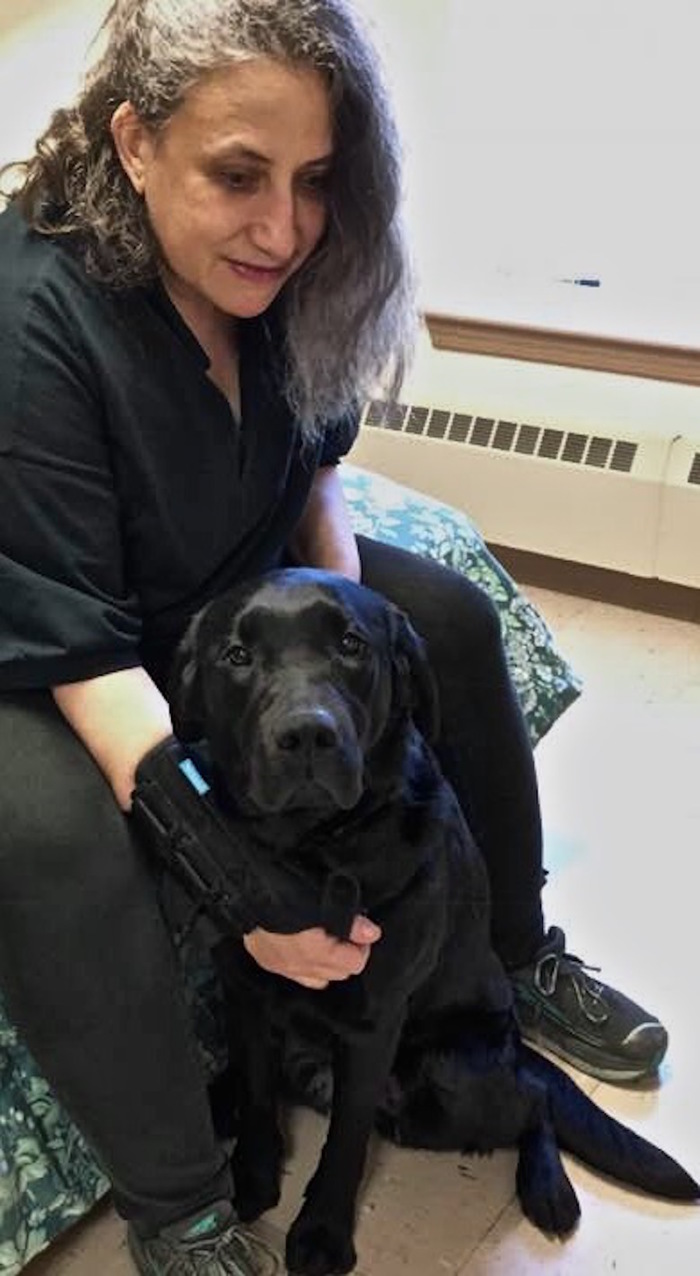 After being denied access to Stonewall Inn, Zelvin and their friends went to another bar where they were admitted and served without issue.

“If you are hiring security you are responsible for telling them [the law],” Zelvin says. As we enter Pride season it feels increasingly important that we ensure all our LGBTQ owned businesses understand their legal requirements about accessibility for people with disabilities. But they say it’s “not just a service dog issue.”

“Disabled people in general and blind people, in particular, are not included by LGBTQ community,” they say.

Last week, a lack of proper training literally meant Zelvin wasn’t allowed in the door to a bar that is not just any bar; thanks to President Obama, it’s the national monument celebrating the birth of the LGBTQ rights movement. Ableism is still ignored in the queer community, and accessibility issues that exclude queer people with disabilities from community spaces are too prevalent.

In the video, Zelvin’s friends noted that no one in line to enter Stonewall Inn came to Zelvin’s defense that night. They hope that this situation can help raise awareness about the daily struggles around access for LGBTQ people with disabilities, and that in the future, other community members will speak up when in the vicinity of a disabled person being denied access.

“Why isn’t our community there for us?” they ask.

Zelvin says that the result of LGBTQ businesses breaking the law and denying access to LGBTQ people with disabilities is that they feel like they can’t participate or won’t be accommodated within LGBTQ spaces.

“I don’t go out anymore in gay community,” they say. “At least in the nightlife part of it.”