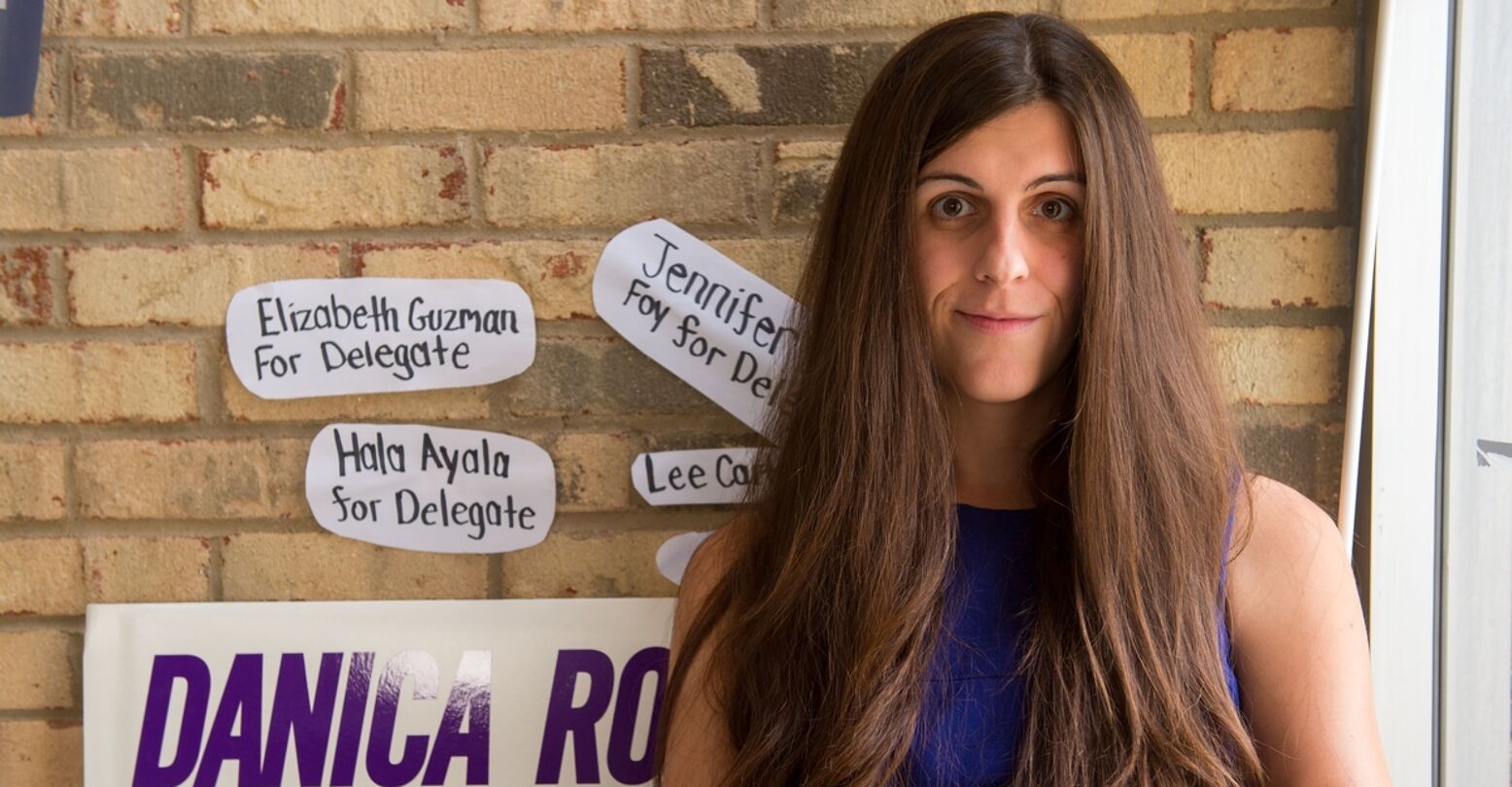 Tuesday’s special elections were historic for the LGBTQ community.

The nation’s first-ever openly transgender state legislator was elected over one of the country’s most openly transphobic politicians in a decisive victory. Danica Roem, a former journalist for the Gainesville Times, beat incumbent Del. Bob Marshall by eight points for a seat in Virginia’s House of Delegates.

Roem’s win will make her the first openly transgender candidate to hold office at the statewide level. Stacie Laughton was elected to New Hampshire’s House of Representatives in 2012 but resigned before taking her seat.

Althea Garrison, a Republican representative in the Massachusetts legislature from 1993 to 1995, was outed after leaving office.

But the 32-year-old was one of eight transgender people (at the time of writing) who won their respective races, a majority of whom shattered the glass ceiling in their respective states to do so. Here is the new crop of trans elected officials who are changing politics.

Roem’s victory is particularly symbolic given her opponent’s longtime opposition to LGBTQ rights.

Marshall, who proudly refers to himself as Virginia’s “chief homophobe,” is the author of a proposed anti-LGBTQ bathroom bill in the vein of North Carolina’s House Bill 2. The legislation, which was later repealed and replaced with a very similar law, mandates trans people use restrooms that correspond with the sex listed on their birth certificate.

Marshall refused to debate Roem during the special election and referred to her using male pronouns.

Flyers distributed by the Virginia Republican Party frequently misgendered the Democratic candidate. One leaflet distributed in the weeks leading up to the election was titled “Danica Roem In His Own Words.”

“Danica Roem, born male, has made a campaign issue out of transitioning to female,” it warned.

As it became clear that she would sail to victory on Tuesday night, Roem told reporters that her win shows that “discrimination is a disqualifier.” She claimed that voters in suburban Prince William County had chosen to disregard “fear tactics” and “phobias” and instead “celebrate you because of who you are, not despite it.”

A semi-retired carpenter was one of four people elected to the Somerset City Council in Strafford County, New Hampshire on Tuesday.

Gerri Cannon received 494 votes in the District 18 race, running a close fourth behind the other three board members tapped alongside her. Kelly Brennan, the top vote-getter in Somerset, nabbed 611 votes.

Cannon, who describes herself as a “proud transgender woman,” is extremely involved in her local community. She serves as a Council Member for PFLAG New Hampshire, the organization which provides support to LGBTQ people and their loved ones. The mother and grandmother also a member of the New Hampshire Conference of UCC Churches, sitting on their Open and Affirming Committee.

She plans on running as a state representative in the New Hampshire General Assembly next year.

A former community organizer in Minnesota became the first transgender woman of color to hold public office by winning a seat on the Minneapolis City Council.

Andrea Jenkins ran uncontested for most of the race, taking an overwhelming 73 percent of the vote on Tuesday. She has an extensive resume: In addition to serving as an advisor to two different city council members, Jenkins has worked as a social worker and a historian in the University of Minnesota’s Trans Oral History Project.

The 56-year-old’s campaign focused on issues of equity that impact people of color and low-income residents in her district, which is extremely segregated along income lines.

Jenkins highlighted her mission to fight for marginalized voices following her victory.

“As an out African-American trans-identified woman, I know first-hand the feeling of being marginalized, left out, thrown under the bus,” she claimed in a statement put out by her campaign on Wednesday. “Those days are over. We don’t just want a seat at the tablewe want to set the table.”

Jenkins was one of two trans candidates to win a seat on the Minneapolis City Council. Phillipe Cunningham, a former advisor to the mayor, upset longtime councilmember Barb Johnson, who has represented the 4th Ward since 1997.

It was an extremely close race: The results weren’t announced until midday Wednesday, well after many of the other races had been called. Although Johnson won a majority of first-place ballots (42.9 percent), Cunningham prevailed in the second round of voting, earning 52 percent. He won 49.5 percent of the overall vote, eventually besting the incumbent by more than three points. Johnson was widely expected to win.

A former teacher and youth advocate in Chicago, the 30-year-old ran on a message of “education, youth success, racial equity, and LGBTQ rights,” according to his website.

Danni Askini, co-chair of the Breakthrough national fund, called Cunningham and Jenkins’ wins in Minneapolis “historic.” Breakthrough is a transgender political action committee that focused on mobilizing working-class voters in local elections. Askini said in a statement that the PAC’s goal is to “permanently expand the electorate.”

She believes that Minnesota is well on its way. “We have elected two brilliant, black candidates to the Minneapolis City Council,” Askini added.

Koontz, a small business owner and church administrator, has lived in DeKalb County for 32 years. Located to the northeast of Atlanta, Doraville hasn’t had an openly LGBTQ city council member since 2013. The 56-year-old was one of several out candidates running for election across Atlanta’s greater metropolitan area.

Prior to her election night win, Koontz claimed that her town was ready to make history.

“Doraville is incredibly diverse, and I think having an LGBTQ person on the council reflects one of many aspects of that diversity,” she told Project Q Atlanta. “In the canvassing that I’ve done so far, when I start talking to people about the issues facing our city, all that just kind of fades into the background anyway. You’re just two people talking about what’s best for the city.”

Although she ran on a pro-business campaign, Koontz believes that having an out trans person on the Doraville City Council will further community visibility.

“For many people, I am the first transgender person they have known, so there is a lot of pressure on me in that regard,” Koontz said. “Especially now, people need to see that transgender people are just normal people, looking to be happy and to be accepted.”

Tyler Titus earned a seat on the Erie School Board, one of four open spots in the Western Pennsylvania town. A licensed counselor and psychologist, Titus originally ran as a write-in candidate for the Democratic nomination in June.

“Tyler Titus shattered a lavender ceiling in Pennsylvania todayand his victory will resonate well-beyond state boundaries,” said Aisha Moodie-Mills, president and CEO of Victory Fund, in a statement. “Trans people remain severely underrepresented in our politics and government, and now more than ever we need trans voices like Tyler’s in the halls of power.”

Titus’ campaign has yet to release a statement, but prior to the results being announced, the clinician wrote on Facebook that he would “not stop fighting for our schools.”
“Our children deserve more,” he said. “Our families deserve more. Our teachers deserve more.”

Raven Matherne, Stamford Board of Representatives

Raven Matherne, who came out as transgender earlier this year, became Stamford’s first openly trans lawmaker earlier this week. A self-described “outdoor and endurance sport enthusiast,” Matherne has spent more than a decade teaching martial arts to children between the ages of three and 18.

But her priorities changed, she says, after coming out: The 29-year-old claims on her website that she seeks to be a “positive role model” for Connecticut’s LGBTQ community. Matherne ran on the Reform Stamford ticket, a local movement to bring change to local government. She campaigned against increasing taxation in Fairfield County.

Matherne will become one of the youngest officials in city government after taking office.

Middleton, a long-time auditor for the State Compensation Insurance Fund, will become the first transgender person in California to hold on a non-judicial position. Trial court judge Victoria Kolakowski became the state’s first openly trans elected official in 2011 and continues to serve in the Alameda County Superior Court.

The 65-year-old coasted to victory by a significant margin. Middleton and attorney Christy Holstege, who also won a City Council seat, each boasted 30 percent of the vote. Their closest challenger, Henry Hampton, came in third with just 13 percent.

Middleton, who began transitioning 22 years ago, credited supporters with her win.

“It’s all because of all of you that we are here tonight, celebrating a victory, a historic victory for our city and for our state,” she said at a campaign party following the results’ announcement.