The young people will win.

That’s the message that 18-year-old student Christian Bales planned to deliver to his fellow classmates at a May 25 graduation ceremony for Covington, KY’s Holy Cross High School. But just hours before Bales, the valedictorian of his graduating class, was set to address his peers, the Senior student’s school pulled the plug on his speech.

Principal Mike Holtz claimed that Bales and salutatorian Katherine Frantz had not submitted their speeches for Diocesan review.

Additionally, administrators didn’t feel their remarks would be appropriate for the occasion. Bales, who was extremely involved in programs like the Harvard United Nations assembly and the Governor’s Scholars Program during his four years at the Catholic institution, dedicated his address to youth leaders advocating for change in their communities—using the Parkland students as an example.

“As we enter into the real world, we must remember that we have a voice,” the speech read. “Rather than allowing opposition to silence us, we must utilize it as empowerment. As long as we nurture our minds as youth, we’ll be able to be equally impactful as we encounter the world.”

“The way they characterized my speech is that it was angry, it was confrontational, and it was too political,” he told INTO over the phone. 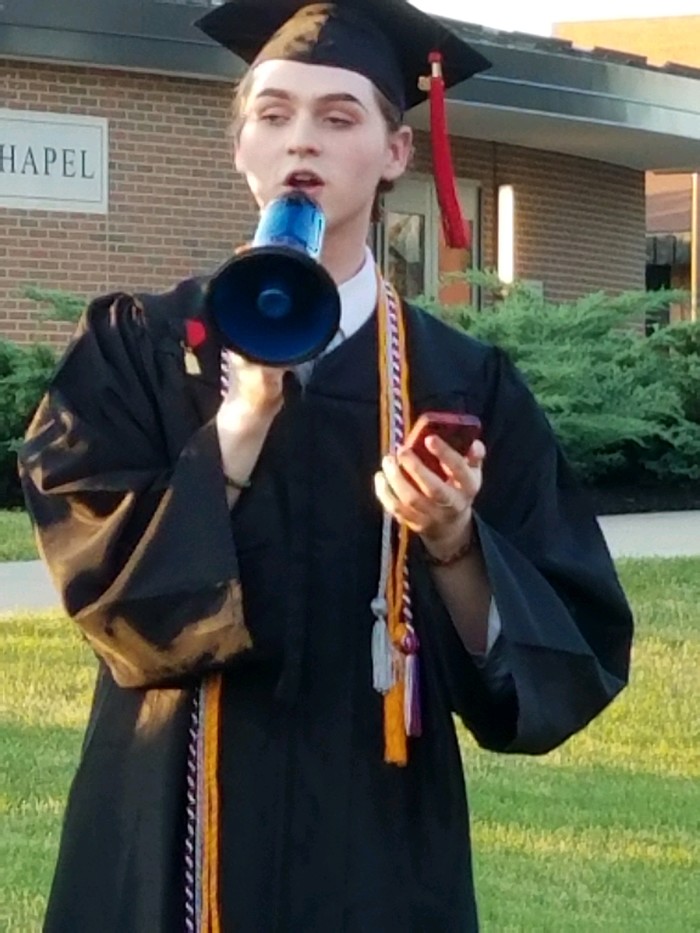 In a half hour interview, Bales added that the Diocese claimed the “ideology” of the Marjory Stoneman Douglas students—who have led a national conversation about gun control since the Feb 14 shooting—goes against the Catholic faith.

He said he doesn’t agree with that feedback.

The students were informed their speeches had been rejected the morning of the graduation ceremony, just 10 hours before they were scheduled to be on stage. Instead of giving them the opportunity to address the Diocesan concerns, Bales and Frantz were told there wouldn’t be time. Instead the high school immediately erased their entries from the graduation booklet—as if the incident never took place.

Bales’ mother, Gillian Marksberry, said the news came as a “shock” to her family. She told INTO over the phone that she cried “several times” that day.

“It’s really difficult as a parent to watch your child strive for something, given that acknowledgment and reward, and then have it ripped out from underneath them,” Marksberry claimed. “That’s hard to swallow. When your child feels pain, as a parent you feel it as if it’s your own. You bear that cross for them.”

“I think this was very mishandled,” she added. “It should have been a conversation we had months ago.”

While the Diocese of Covington claimed that the political content of Bales’ speech is not in line with Catholic values, his mother alleged there’s a different reason he was removed from the graduation program: Bales identifies as queer and is gender nonconforming.

A week before the ceremony, Holtz had a meeting with the parish priest and the superintendent to discuss the possibility that Bales might wear makeup or heels to graduation, which was held at nearby Thomas More College in Crestview Hills. Following that discussion, the principal called Marksberry to ensure he wouldn’t sashay his way to the podium.

She told the principal the family would comply with the school’s request for masculine dress.

“I assured him we do respect the wishes of the school and understand that conformity is critical sometimes in our society,” said Marksberry, who noted that she often covers her tattoos in the workplace. “We all have to conform at different things.”

Bales said that his gender presentation had long put him on the radar of the Diocese of Covington, calling it a “four-year power struggle.” During his sophomore year, the administration forbid male students from wearing “hair accessories” during an announcement broadcast over the school intercom—even though it wasn’t specifically prohibited in the dress code.

After getting in trouble on a number of occasions, the student stopped wearing bobby pins in his hair and wearing makeup as much. But Bales also said it’s because his workload began to increase at school.

“To be frank, I did not time to make sure my appearance was perfect every day,” he claimed.

But Bales and his mother said that despite a handful of negative experiences, his relationship with Holy Cross High School has been largely positive. Teachers and other students in his tight-knit class of 84 embraced him. The teenager wore a floral jumper, makeup, hair accessories, and heels to this year’s Prom without backlash.

His mother is grateful the school allowed him to “be himself.”

“They helped him discover his voice,” she explained. “They elevated him and allowed him to develop self-confidence.”

But Marksberry said that his gender difference has been apparent from a young age. One of his mother’s fondest memories is Bales stomping up and down the stairs in her best high heels. When she asked what he was doing, Bales responded, “I’m practicing for when I’m older!”

“OK, be careful!” she recalled telling him. “Don’t break an ankle.” 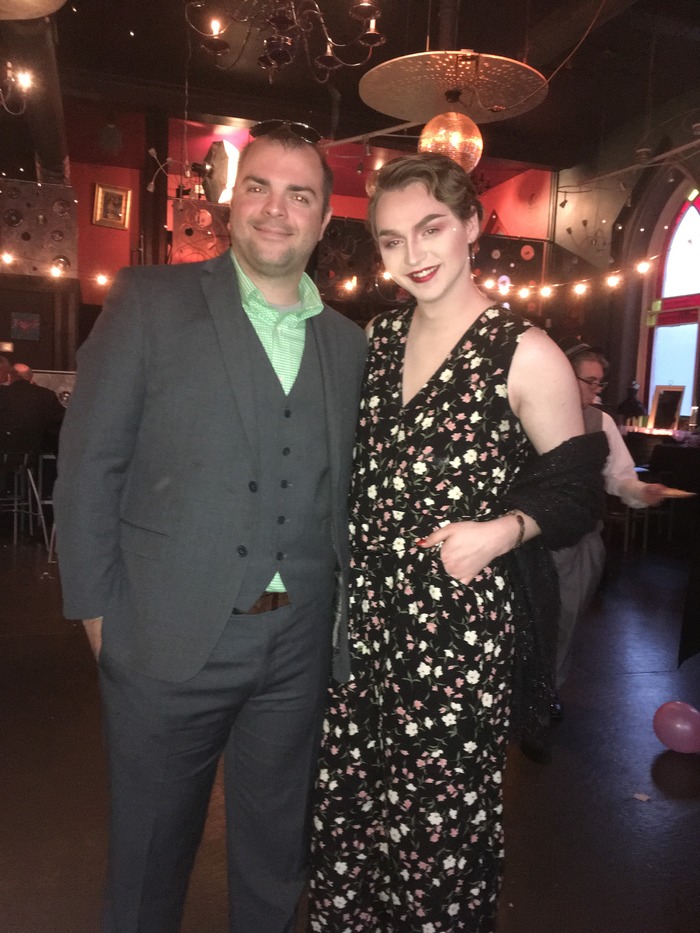 When Bales finally came out to her at the age of 14, Marksberry told him she already knew—and loved him for it. She looked at him and said, “I’m your mom. I know these things. I was just waiting for you to tell me.”

The support from friends, family, and classmates was evident during this weekend’s graduation ceremony. Although Bales would continue to be blocked from giving his speech, his peers stood and applauded when he walked to the stage to receive his diploma. Marksberry made rainbow ribbons to hand out to students and parents during the event and the supply ran out almost immediately.

“I’ve never seen so much silent power as I did within the confines of that ceremony—even without him addressing his class from the podium,” she said. “The irony is that in the attempt to silence his voice, look at how much louder it became.”

Although the Diocese never did tell Bales what about his speech was so objectionable, he found a way to give it anyway.

Bales and Frantz, who is both the student council president and his best friend, stood outside the ceremony as students were leaving and delivered their speeches from a bullhorn Bales’ father gave him. A group of 80 to 100 people gathered around the pair as Bales told the crowd that young people are “finished being complacent.”

Given the controversy of the past day, his comments proved eerily prescient.

“There’s a misguided notion that wisdom is directly proportional to age, but we’re disproving that daily,” Bales said on Friday. “Sometimes the wisest are the youngest in our lives, the ones who haven’t yet been desensitized to the atrocities of our world.”

“We are dynamic,” he would add. “We are intelligent. We have a voice, and we’re capable of using it in all communities.”

Since that speech went viral over the weekend, the family claimed they’ve heard from people all over the world who were moved by Bales’ comments. Marksberry said a woman in Michigan read the address to her elderly Catholic parents, who are now in their 70s. The woman reached out on Facebook to say her parents wanted Bales to know that he is loved and supported.

“They wanted him to know that not all Catholics feel the way the Diocese has stated,” Marksberry said.

Bales claimed that what’s been most humbling about the speech’s reception, though, is seeing the reaction among LGBTQ youth who are in similar situations—whether that’s attending Catholic schools or living in conservative areas. Many have reached out to say they, too, will work to advocate for reform and social change in their communities.

“The circumstances amplified my speech even further,” Bales said.

“There’s a point in the speech where I talk about the fact that you have to utilize opposition as empowerment,” he continued. “I think this moment aligned perfectly with that. Even though they did try to push us down, silence us, and keep us from speaking, now it’s on an international level—and it just keeps growing.”

Read the speech in its entirety here.