Over the past week, human rights groups working on sex worker and trans issues have come together to remember the life of Vanesa Campos, a trans woman and sex worker who was killed the night of August 16 in Paris. Activists and media report that a gang of men shot her while she attempted to protect a client from being robbed by the men.

Campos, 36, was killed in Bois de Boulogne, a part of Paris popular among sex workers and their clients, according to the Independent.

She had moved from Peru to France two years ago.

The Independent reports that five men had been charged in connection with her death, and other local media say around a dozen sex workers have been killed in the same area over the past several years. Some activists have accused the French media of ignoring the murder of Campos until recently. 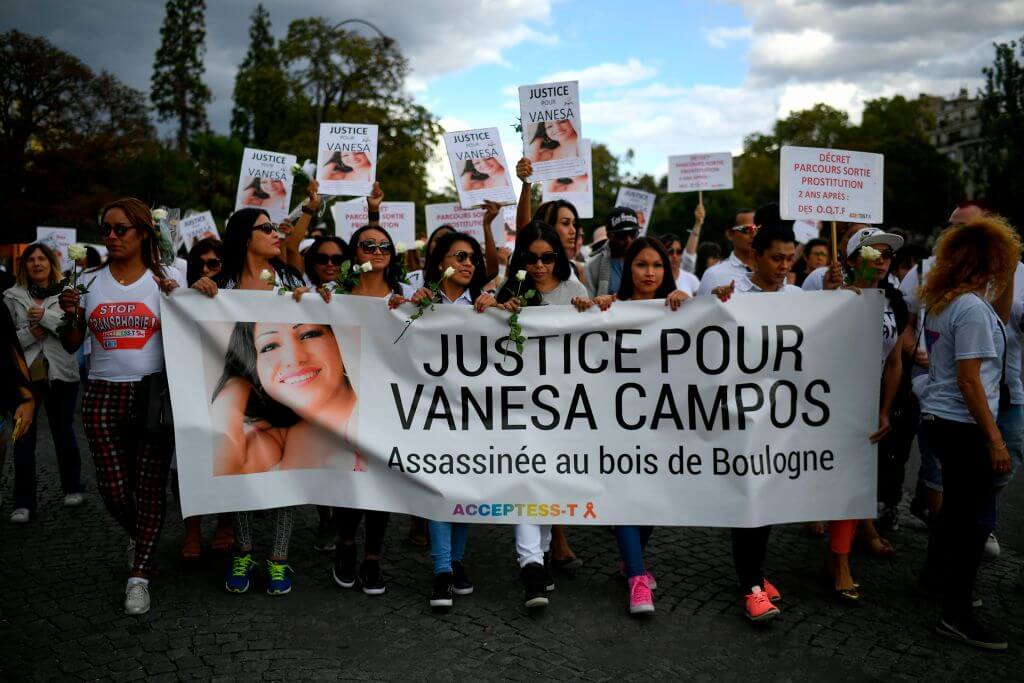 At the time of her death, STRASS, a French sex worker rights collective and union, released a statement translated to English saying “The murders of trans women sex workers are not rare. This is a recurring phenomenon and we regularly try to alert public opinion and the authorities to this violence. Unfortunately, as always, we find ourselves alone.”

“We will go on with our lives carrying her in our memories,” she continued. “We continue to live hoping that by resisting, things will perhaps improve a little for those younger ones who will take our place after us.”

STRASS, along with several other rights groups, organized a Day of Action in Campos’ memory on September 21 with protests happening in the days after.  The organizers requested that people go to French embassies and consulates to show support to Campos as well as to raise awareness of the dangers and discrimination that both trans people and sex workers face. The organizers specifically called out the so-called “Swedish Model” that criminalizes the purchase of sex, arguing that it leads to an increase in danger for sex workers.

Organized events took place around the globe from L.A. to Copenhagen. In Vienna, Austria, the migrant sex worker organization Red Edition joined in the Day of Action by gathering in front of the French embassy.

“The murder of Vanesa is part of a long list of violence against trans women, often sex workers, and migrants. Between 2009 and 2017, a total of 2609 trans and gender-diverse people were reported killed in 71 countries between January 2008 and September 2017,” Red Edition’s spokesperson Trajche Janushev told INTO in a Facebook message.

“We want to show to the world, to stakeholders, to the other movements that sex workers’ lives matters! We are maybe a small movement but brave enough to say stop to the violence against sex workers!” Janushev added. 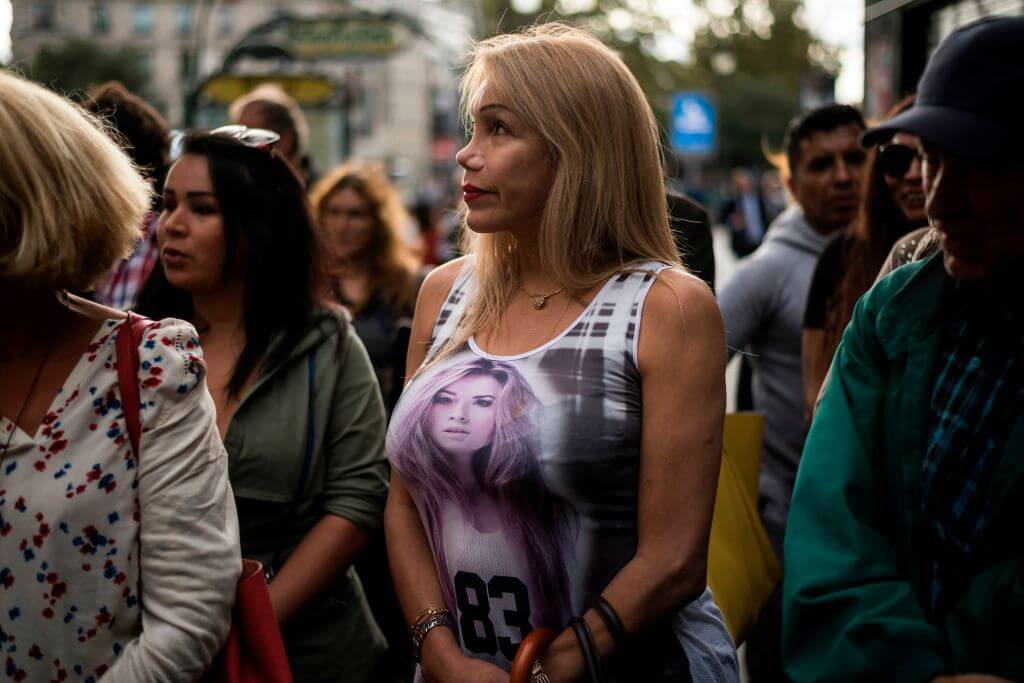 Thierry Schaffauser, an activist and spokesperson with STRASS, says that the night Campos was killed others heard her cry out “Todas,” which he says was a warning used to alert other sex workers of danger. By the time others nearby arrived, it was too late. Campos had been shot in the chest, by a gun, Schaffauser says, that had been stolen from a police officer.

“We had a strong mobilization because the mobilization was to make sure we would obtain justice,” Schaffauser told INTO. “Killers are often times never arrested, especially if the sex worker is a migrant and [authorities] think “Oh, there’s no family, so who will ask for the investigation?’ and all that.”

However, Schaffauser said that the quick protests including hundreds of people going to the streets in Paris helped to push the authorities to act. He explained that women in the area had attempted to warn the police that there was some danger there but their warnings went unnoticed.

“It was a group of men who regularly attack … it was because [Campos] defended her client that they targeted her,” he said.

“If we had done nothing, then I’m not sure the murderers would have been arrested,” Schaffauser said. “When sex workers are killed people think it’s normal. In France, we say ‘prostitution is violence’ so people don’t separate sex work with violence.”

He said that sex workers now are also put in more danger because of France’s embrace of the Swedish Model, which decreases the amount of negotiation a sex worker can make in where to meet clients. It forces them to go to more remote areas, like the Bois de Boulogne, which Schaffauser explained barely has any lighting.

“It’s not just the attackers and the violence, but the whole environment that makes the violence easier,” Schaffauser said, commenting that the legal and social norms that promote the discrimination of sex workers, trans people, and migrants led to Campos’ death. 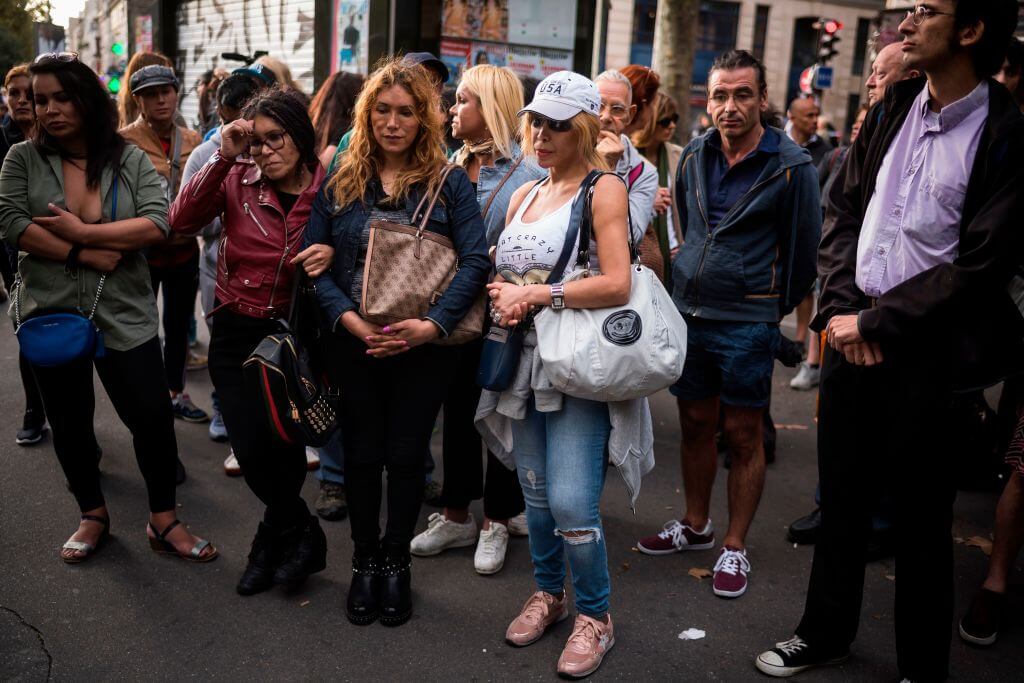 Schaffauser knew Campos through his work with STRASS and he remembered Campos participating in the groups’ work.