Now that they have their signed expunction orders in hand, the heartbreaking saga of the San Antonio Four is finally over.

It all began when the four Latinx lesbian women in San Antonio, Texas, were falsely accused of child rape in the ‘90s. In the summer of 1994, Elizabeth Ramirez babysat her two young nieces for a week, and her three close friends, Kristie Mayhugh, and couple Cassandra Rivera Hurtado and Anna Vasquez, helped out with the kids. They had all recently graduated high school.

Several months later, due to a combination of homophobia and a family member’s personal vendetta, the women were falsely accused of sexually assaulting the two girls as part of a Satanic ritual. The nation was in the midst of unfounded hysteria about Satanism, and despite vehement denials of such heinous crimes, the four women were prosecuted.

Ramirez was tried first, in 1997, and she was convicted and sentenced to 37 and a half years. The remaining three women were tried together in 1998, and they were convicted and sentenced to 15 years each. Appeals failed, and they went to prison a few years later. They fought tirelessly for the freedom, with significant help from the Innocence Project from Texas, but it would take over a decade for any relief.

Vasquez was shocked to be released on parole in 2012, after serving 12 years. Then, one of their accusers recanted, and some “forensic science” that helped convict the women was discovered to be junk science. Based on this, the following year, Innocence Project of Texas secured the release of the remaining three women; Ramirez had been in prison for 17 years, and Hurtado and Mayhugh for around 14 years each. They were now in their early forties.

In 2016, the state’s highest court deemed the women “actually innocent” and officially exonerated, and they were compensated generously by the state, receiving amounts based on their time served as well as an annuity for life that is around several thousand dollars a month. Most people following their story thought the injustice ended there, but the women had one final step left to be fully cleared of the crime. Just over two years after being exonerated, their records were finally expunged by a judge in San Antonio on December 3, 2018 — 24 years after the start of their tragic ordeal.

While the San Antonio Four were technically no longer convicted felons following their exoneration, no expunction meant their records were still in the system, says lawyer Mike Ware, executive director of The Innocence Project of Texas, who secured the women’s exoneration and expunction. This meant that any background checks run during the two-year period between exoneration and expunction, such as those from potential employers and landlords, revealed they had been arrested and convicted of sexual assault of a child.

Before her exoneration, Mayhugh struggled to find an employer that would hire her, but even afterward, it was difficult since her criminal record still had those marks. She now lives in Houston and plans to return to school, but she delayed her enrollment due to concerns that her record would create complications.

Before the expunction, Hurtado entered paralegal school, and when her criminal records came up in the application process, she had to explain the situation. Fortunately, they let her in.

Vasquez, who lives in San Antonio and works full-time for The Innocence Project of Texas, frequently speaks about her experience at high schools. “I had been exonerated, yet every time I went into a high school for a speaking engagement, I was being escorted in and out, because I was red-flagged,” Vasquez told INTO. She says it continued to impact our lives since they were still essentially treated like convicted felons. When a documentary made about her and the other women, Southwest of Salem, had screenings in Canada, the four couldn’t attend because they weren’t allowed to cross the border.

The women’s records showed that their convictions had been vacated, but that doesn’t always matter. “In many cases, an arrest record is enough for the employer, or the person at customs who’s deciding whether to let you into the country or not, or the high school where you’re speaking,” Ware says. “Sometimes an arrest record is all that matters — that’s as far as they look — so the fact that they don’t have convictions is not sufficient.” Ware adds that having an arrest record for sexual assault of a child can also result in different treatment by police, even if you’re just pulled over for a minor traffic violation.

Now that the expunction is complete, the women no longer have to fear background checks or border crossings.

“For me, the expunction is like the icing on the cake,” Mayhugh says. “It’s a completion of everything, because that’s basically what we were fighting for — to have our names cleared. It’s a big deal because now I feel like I can finally move forward with my life and do the things that I want to do.”

Why expunction took so long

An expunction is typically always a slow process due to the complex statutes involved, Ware says. But there are a few reasons why the expunction of the San Antonio Four took this long.

When a case is expunged in Texas, it’s usually wiped off the books completely; it’s as though it never happened, Ware explains. This means it can’t be referenced in future cases.

“We wanted our case to be able to be used in court by others who were going through something similar, because there are so many other people wrongly convicted of the same offense,” Hurtado says. “We were even more than willing to keep it on our record so that it could be used.”

Ramirez echoed that sentiment: “To us, why fight such a big fight and then not be able to reference it? What good would that be for people who need hope?”

Vasquez says sharing their story, raising awareness about wrongful convictions, and advocating for criminal justice reform is crucial. Ware also wanted to keep the “beautiful published opinion exonerating the women” on the books. So expunction was off the table unless the four could keep their case and opinion on record and speak freely about their experiences.

“We have always wanted our names to be cleared and the truth to be known, and finally, we are out of the system,” Vasquez says. “That takes precedence over any amount of money the State of Texas could have paid us.”

Since the summer of 2017, Hurtado has worked as a legal assistant for San Antonio lawyer Rosie Gonzalez, who was an advocate for the women’s freedom when they were imprisoned. As part of her job, Hurtado has had to go to the courthouse where she was convicted in order to file and pick up documents. She’s run into the prosecutors who put both her and Ramirez behind bars. It was extremely difficult and emotional at first, though she’s gotten accustomed to it. But nothing could prepare her for the day of the expunction hearing, which took place the 175th State District Court — the very same courtroom where all four women were convicted.

Despite the positive development in the case, returning to the same courtroom where they were convicted brought back difficult memories for the San Antonio Four. Before the hearing, Mayhugh wasn’t too worried, but as she approached the courthouse — and especially once she realized there was a lot of press there — she began feeling nervous and uneasy.

Vasquez felt mixed emotions. “I think a lot of people expect you to have this joyous day, and it was, but at the same time, it was also like all these memories just came rushing back,” she says. “For example, when Cassie and I turned ourselves in, we had family and friends in tow to walk us in there, and we were placed under arrest. Then this time our family members were there again, but it was more of a celebration than a sad ending.”

Re-entering the courtroom also brought Ramirez painful flashbacks. She remembered the gut-wrenching feeling of learning she was sentenced to 37 and a half years for a crime she didn’t commit. She remembered getting only five minutes to say goodbye to her mother, then “freaking out” and fainting onto the ground at the prospect of spending most of her life behind bars, and then being ridiculed by guards.

When Hurtado stepped in the courtroom, she began crying and shaking. She says seeing her family in the pews and watching Ware get up and speak again made her feel like she’d gone back in time to the original trial.

“[The expunction hearing] was so emotional; I didn’t stop crying and shaking until well after we left the courthouse,” Hurtado says. “And it was good to hear what the judge had to say; she was very nice about it. That meant a lot to us, because the last time we were in that court we were treated horribly.” 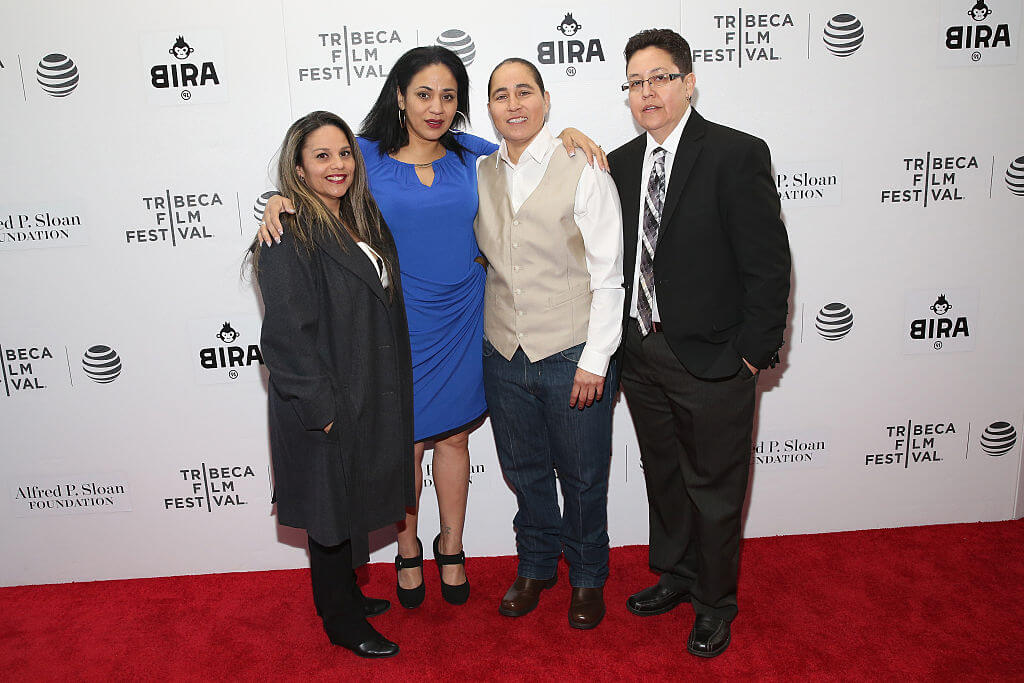 The expunction is hugely meaningful to all four women, and Hurtado says it feels amazing to no longer have anything hanging over their heads. But that doesn’t mean they’ll go away quietly. “Even though it’s done, we’re not going to stop fighting for what we believe in,” she says.

Ramirez, who lives in San Antonio and runs a printing business with her wife, says while they’ve been fully cleared on paper, it still doesn’t change what they went through. She’s often recognized around town as one of the San Antonio Four, and she views the lingering title as bittersweet.

While sometimes she’d prefer everyone to forget about it, she says, she appreciates that people know they didn’t just sit down and take it, but instead never gave up and kept fighting. She also knows her story raises awareness about wrongful convictions, which is especially important given that she and the others think their situation could easily happen today. “There are still people who think that being gay means you’d do something criminal,” Ramirez says. “Putting this story out for people to understand and know it happened will bring other people to come forward and share and help.”

In November, Hurtado’s boss, Rosie Gonzalez, won the election to become the judge of Bexar County Court at Law No. 13 this January. Hurtado is planning to be a clerk for Gonzalez, and in an ironic twist of fate, she’ll be spending her days at the same courthouse where so much of her fate has been decided.

But she’s not scared to work in the same place that wrongly put her behind bars for almost 15 years. “I’m proud of myself because I’m able to walk into that courthouse and know they did not break us,” Hurtado says. “They know that we fought and we won, and the world knows that they were wrong.”