Around 300 people will march on the Great Wall of China on September 23 as part of its sixth annual AIDS Walk.

Organized by the Beijing Gender Health Education Institute (BGHEI), the event is the only one of its kind in China. The only AIDS Walk that can be seen from space, its goal is to raise awareness about the spread of HIV among China’s 1.4 billion population. According to BGHEI’s Martin Yang, a recent report showed that there are 750,000 people living with HIV in the East Asian country.

“It’s not as terrible as things in Africa, but it’s still a big challenge,” says Yang, who serves as the LGBTQ organization’s sustainable development project manager.

Although Yang says that China positions itself as a success story in fighting HIV/AIDS, the reality is complicated. Things have certainly improved since the virus first hit China in the late 1980s. Rural villages like Shuang Miao, in which hundreds were infected, were quarantined in the mid-aughts in fear of a further outbreak. But today less than one percent of the population is HIV-positive.

Last year, China’s Center for Disease Control reported that rates of HIV contraction among gay and bisexual men have skyrocketed since 2011increasing by 400 percent. In 2015, an estimated 32,617 MSMs (men who have sex with men) became positive.

Health experts, though, are particularly concerned about the incidence of HIV/AIDS among Chinese youthparticularly young gay men. Between the years of 2011 to 2015, the rate of infection among those aged 15 to 24 shot up by 35 percent. Universities have sought to curtail this outbreak by selling HIV testing kits in campus vending machines, but reports suggest they are haphazardly refilled.

Although HIV medications like AZT are covered by the Chinese government, Yang says that they have declined to sponsor pre-exposure prophylaxis (PrEP). Drugs like Truvada, the most common PrEP pill, have been shown to be 92 to 99 percent effective at preventing HIV infection if taken every day.

“If Chinese people want PREP to protect them, they have to buy it illegally from another country,” Yang says. 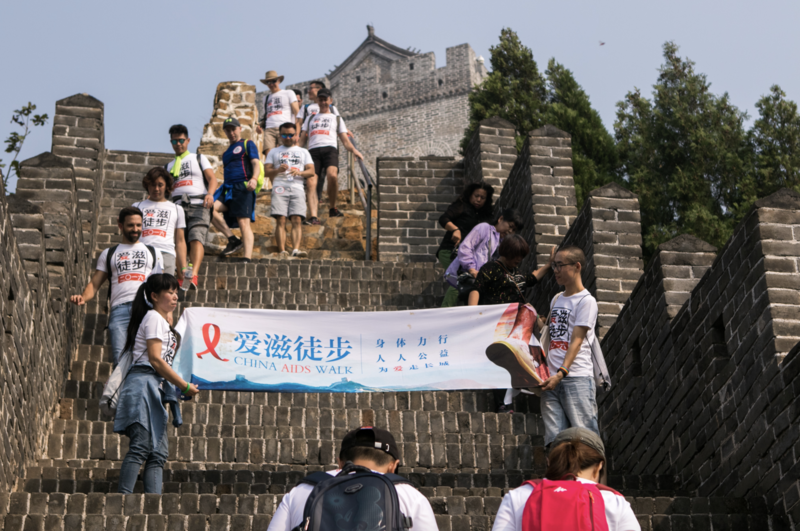 And despite laws designed to prevent discrimination against people living with HIV, loopholes in that system can be exploited. For instance, hospitals can’t turn away a patient seeking treatment for the virus, but if an HIV-positive man is hit by a car, doctors could legally refuse to operate on him due to his status.

There are a handful of hospitals dedicated to the treatment of HIV/AIDS, but those centers often don’t provide medical care for other health needs, even in emergency situations.

The HIV population in China is often left with no options and nowhere to go.
This year’s AIDS Walk, which coincides with the 20th anniversary of BGHEI, will raise money for those who can’t receive treatment. Although the event raised 350,000 yuan last year, the goal for 2017 is 500,000. Funds have previously gone to providing a year’s supply of formula for orphans living with HIV in rural areas of the Sichuan province and holding HIV/AIDS prevention seminars at local universities.

But organizers say the event is as much about education as it is fundraising. 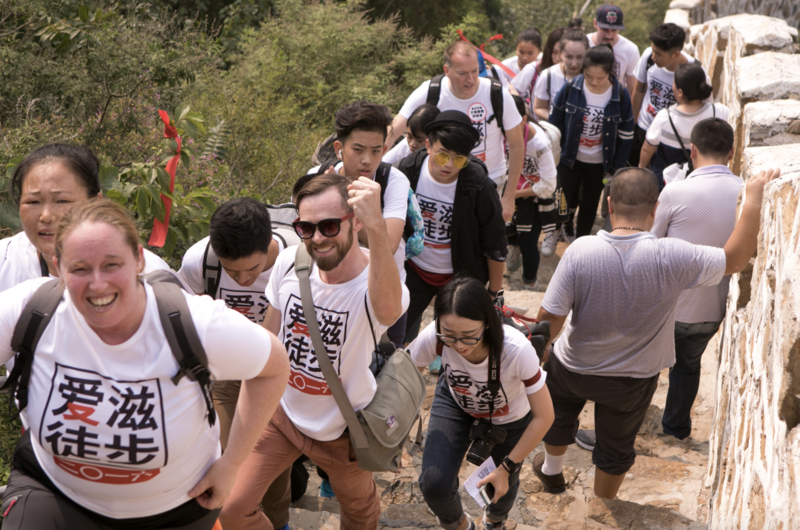 A.J. Song, the development manager for BGHEI, says that before coming to the AIDS Walk, he was terrified to get tested. There’s a high level of stigma against people living with HIV/AIDS in China, largely due to the persistence of homophobia. A 2016 report found that just five percent of Chinese LGBTQ peopleare out in their daily lives.
The AIDS Walk was the first time Song had the chance to meet someone who is openly HIV positive. He says that the experience, which gave him the courage to learn his status, was transformative.

“I hugged him,” Song says. “I was so released after that. I was literally dancing in the rain.”

Although the event was initially held at a different location, the Great Wall of China is a potent symbol for the country’s HIV movement as it works to overcome years of struggle. Geoff Chin, the international project manager for the Los Angeles LGBT Center, attended last year’s event. He says that national landmark, completed in 1878, is often steep and uneven. Walkers have to use their legs for every single step.
“It was physically very challenging,” Chin says. “What I thought about while I was walking is that it’s a lot like fighting the HIV battle in China.”

This year’s walk will take place along the Jinshanling section, a 6.5-mile stretch.