More than 200 protesters gathered at L.A.’s City Hall on Monday to speak out against a proposed memo from the Trump administration erasing trans people in federal policy.

As the New York Times reported on Sunday, the memo would define gender as exclusive to biological sex and determined at birth. The alleged policy is being drafted by the Department of Health and Human Services (HHS) and will be delivered to the Department of Justice (DOJ) by the end of the year. If the DOJ signs off, it will then be issued to the Departments of Labor and Education.

Trans activists and allies tell INTO how they’re coping with yet another attack from the White House, as well as how they plan to resist.

Selene: I really wanted to come out and show my full support of my trans siblings because it’s times like this that we need to be heard and we need to show numbers, support, and love for another one another. I came out in hopes that we could band together and somehow fix what’s gone wrong in our society.

INTO: When you heard about the Trump memo, how did you react?

Selene: At first I cried. It’s been a difficult few days. I had a show last night that I had to perform in Hollywood. I shunned my usual standup set, and I just spoke from the heart. But unfortunately, all of my siblings don’t have the same opportunity to have that outlet. All the anger and the sadness and the frustration, it really doesn’t have anywhere to manifest itself. I think that us gathering together and loving one another is the environment that we should be in right now.

INTO: What did you say on stage?

Selene: My audience is not usually LGBTQ. So a lot of the time I find myself having to explain what’s going on in the media from my perspective because they have no idea. I basically said that I just got finished all my paperwork to get my name changed legally and to push forward with my gender change. I said, “I feel like the student who got an F on their test and I didn’t even submit my test yet.”

It’s scary when you have to think about the possibility of being arrested and put into the wrong holding cell, being raped and murdered, or being discriminated against at work. If you do have a 9 to 5 or you’re a college student, these things that help us to live our everyday lives as safely as possible — people want to strip them away. It’s very difficult to understand what harm we’re doing by being allowed to be safe. 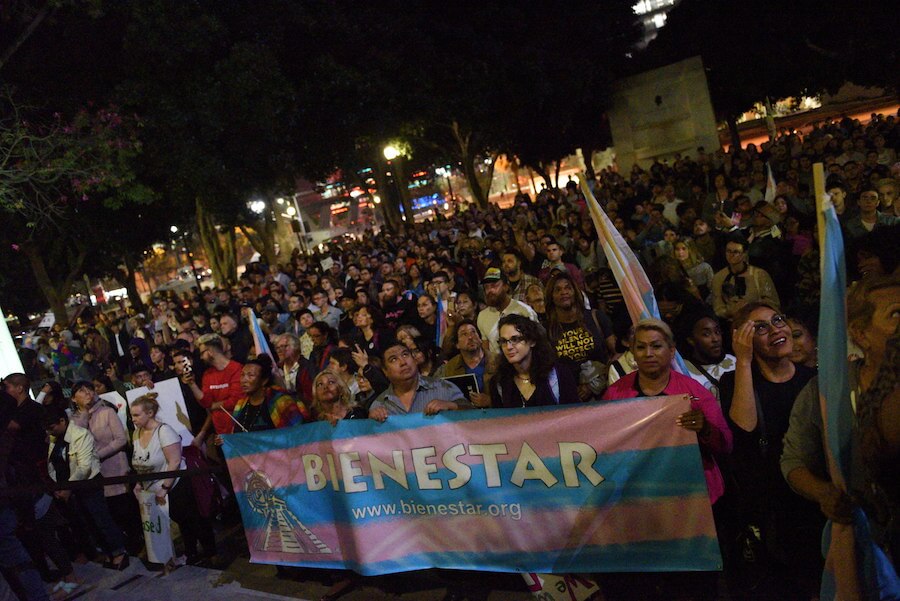 INTO: What motivated you to come out tonight?

Jessie: The fact that we have people here gathered to protest the apparent acts of the administration trying to legislate trans people out of existence and to force individuals to use the genetic marker that they were born with and not who they actually are. It’s a horrible policy that’s not grounded in science. It’s actually an action plan that was put together by the Family Research Council years ago, and they have published what they intend to do. Because so many of them are in the administration, they are acting upon those beliefs. They want to make it so that life would be impossible.

Hopefully, the courts will be able to step in and put a stop to some of this nonsense. I’m not sure what it is that they are so afraid of about people being trans. I mean, a lot of us are doctors, lawyers, scientists, physicists, firefighters, and police officers. We come from all walks of life.

INTO: So much of what’s at stake right now is about trans people being erased. What does it mean to be erased?

Jessie: It’s not so much an erasure to me as it is taking away the ability to change documents that match who you are. I spent 53 years of my life as a “male,” and if they’re going to force me to put an “M” back on my driver’s license, it doesn’t affect me that much because frankly I’m toward the end of my life. If somebody wants to make fun of me, more power to them. I’m living my life and I’m not going to let that interfere [with who I am].

I’m afraid of how this is going to affect kids who are just finally defining themselves. I spent years hiding from myself because of what I saw as negative societal reactions to people who are trans and so I tried to be what they wanted me to be. That was extremely difficult and life was not good. Since my transition, life has actually been really good. I want the kids who are young now to not have to live with that fear.

That is what these types of activities or actions on the part of the government will do. It will force people to not be themselves, and that is so wrong.

INTO: How else do you plan to resist?

Jessie: My resistance is just living my life every single day—being out, open, and proud of who I am. I let others know that the stereotypes that they seem to think about trans people are not accurate and get people who are cisgender individuals to be our allies and to stop this nonsense. The more that I come into contact with cisgender people, the more they see that being trans is nothing to be afraid of.

Edwin: We wanted to support our transgender brothers and sisters who are under attack right now by the administration. As a queer Latino man, I wanted to make sure that I show up, even though what’s happening right now isn’t gay marriage or anything that’s a little bit more of an easy issue to deal with. I wanted to actually be here for the issues that are still divisive right now—like bathrooms, transgender military service, and all these issues that are really starting to take the forefront. So while the T is at the end of LGBTQ right now, we need to put it at the front. We need to start with it.

Angela: I’m here to support my friends, to learn, and to be educated. I feel like I don’t know enough about issues that I should be informed about in order to support the entirety of the community. The more you learn about everybody that lives in your community, then the more compassionate you can be.

INTO: Both of you talked about solidarity and supporting other communities. Why do you think that’s so important right now—to show up for other people who maybe aren’t like yourself?

Edwin: There’s that saying—they came for all these other groups and then finally they come for you and there’s no one left to stand up for you. I think we need to avoid complete groups being dismissed and their rights being dismissed because little by little we start erasing rights for one group and then we turn around and it’s gone for everyone. Even though I’m not a transgender person, I should care so much about what happens to someone who is.

Angela: I believe it’s about us just being humans. Supporting each other is just human nature. I hope in the future to have enough power to be able to help everyone—and I can’t do that if I don’t understand issues I am not informed of. It’s about compassion and admiration for the bravery of everyone standing up right now. 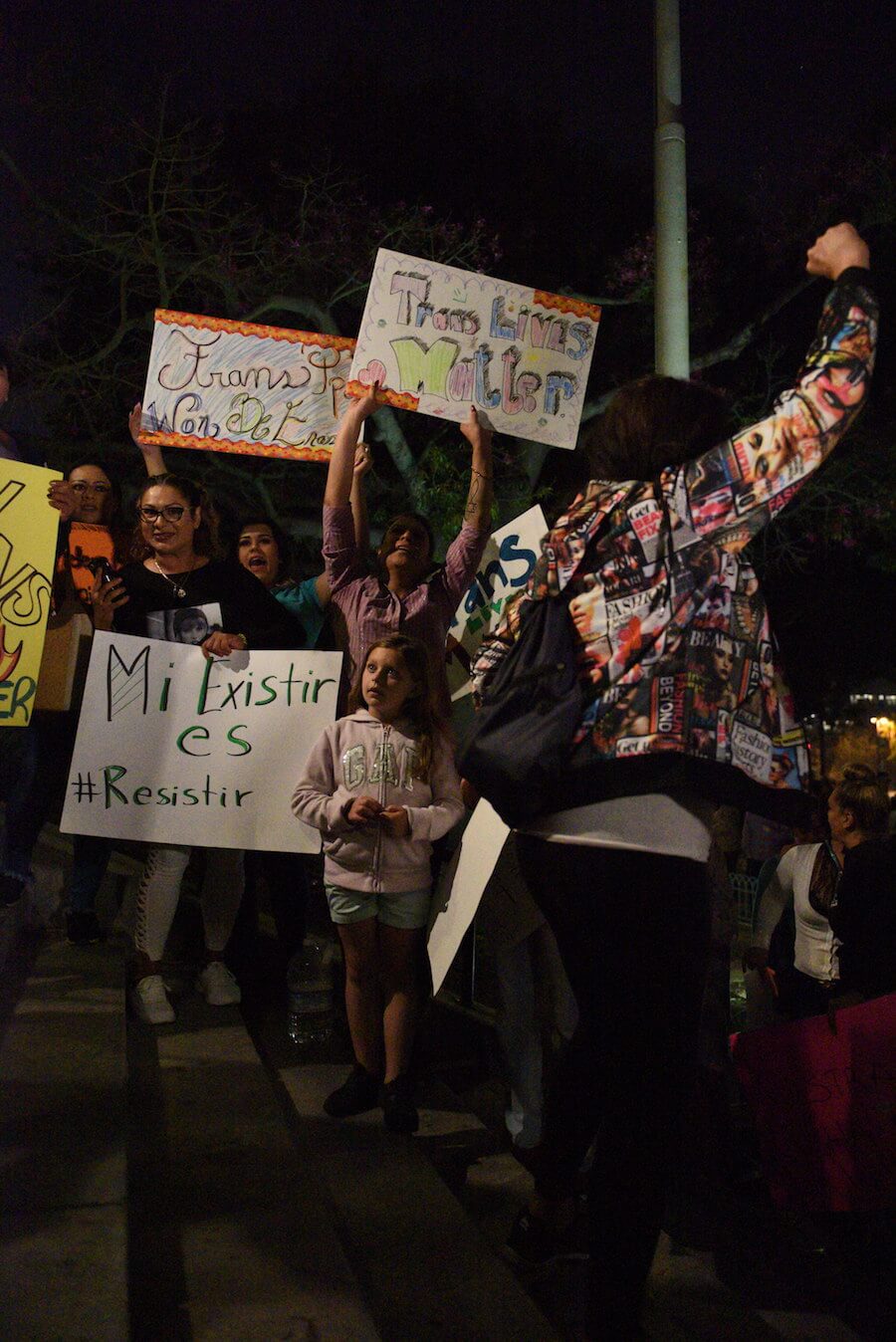 Davia: What brought me out is the possibility that trans people could be rounded up. Taking away our rights is a way to lead to that—by making transgender people no longer a thing. They then have a reason to pathologize us for being transgender. In the past, that’s looked like locking us up in insane asylums. It feels like we’re going back in time right now. And I think it’s a possibility that those certain systems of locking up trans people will start again. I’m here now to empower myself to see that I’m not alone. That’s what this is about for me: to see that I’m not alone. Because that’s also what this [policy] does—it makes us feel like we’re alone.

INTO: When you first heard about the trans memo, how did you react? What was going through your mind at that moment?

Davia: I was thinking a lot about my incarcerated brothers and sisters who are locked up right now and how this is affecting them, but also how about black and brown trans people already don’t have these rights. It’s actually not changing anything because people are already treating us the way that this law would do. The law would just give people ammunition for what they’re already doing.

INTO: How else do you plan on resisting?

Note: These interviews were edited and condensed for clarity.