The quilt was displayed across from the Mormon temple in the center of downtown Provo during the daylong event on Sept. 16, the sixth Pride event in the LDS stronghold’s history. It boasted hundreds of supportive messages to LGBTQ people and their allies — some hopeful, others mixing joy with melancholy.

“Love is love,” reads a 12 x 12-inch square featuring a childlike rainbow drawn over the patchwork material. “We are all human.” 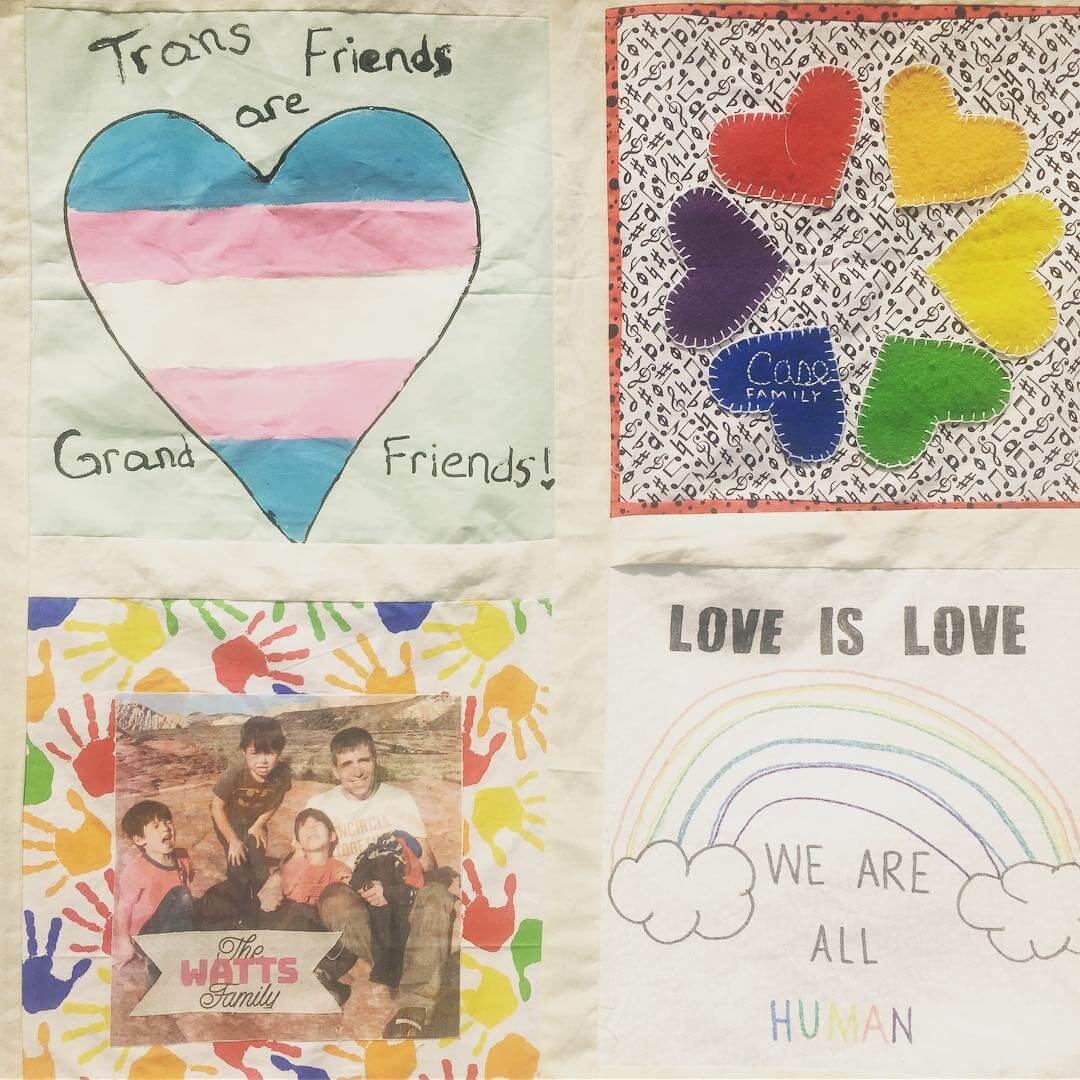 Another square references the more than 30 queer and trans youth in Utah who took their own lives between November 2015 and January 2016, according to estimates from the Mama Dragons support group.

“If you’re looking for a reason to stay alive, this is it,” the entry says.

Locals say the idea for the quilt came out of meetings held after five LGBTQ groups were denied participation in the Provo Freedom Festival — a Fourth of July parade celebrating patriotism — earlier this year. These groups included Queer Meals and Encircle, which provide shelter and food to LGBTQ youth in the area.

When PFLAG and Provo Pride met to discuss reapplying to the parade, organizers felt a quilt would represent a community that is diverse yet united.

“We decided the quilt would be individual squares that represent how a community consists of all these different kinds of families,” said Roni Jo Draper, a professor at Brigham Young University, in a phone interview. “Together it makes this beautiful fabric.”

The project is a personal one for Draper. 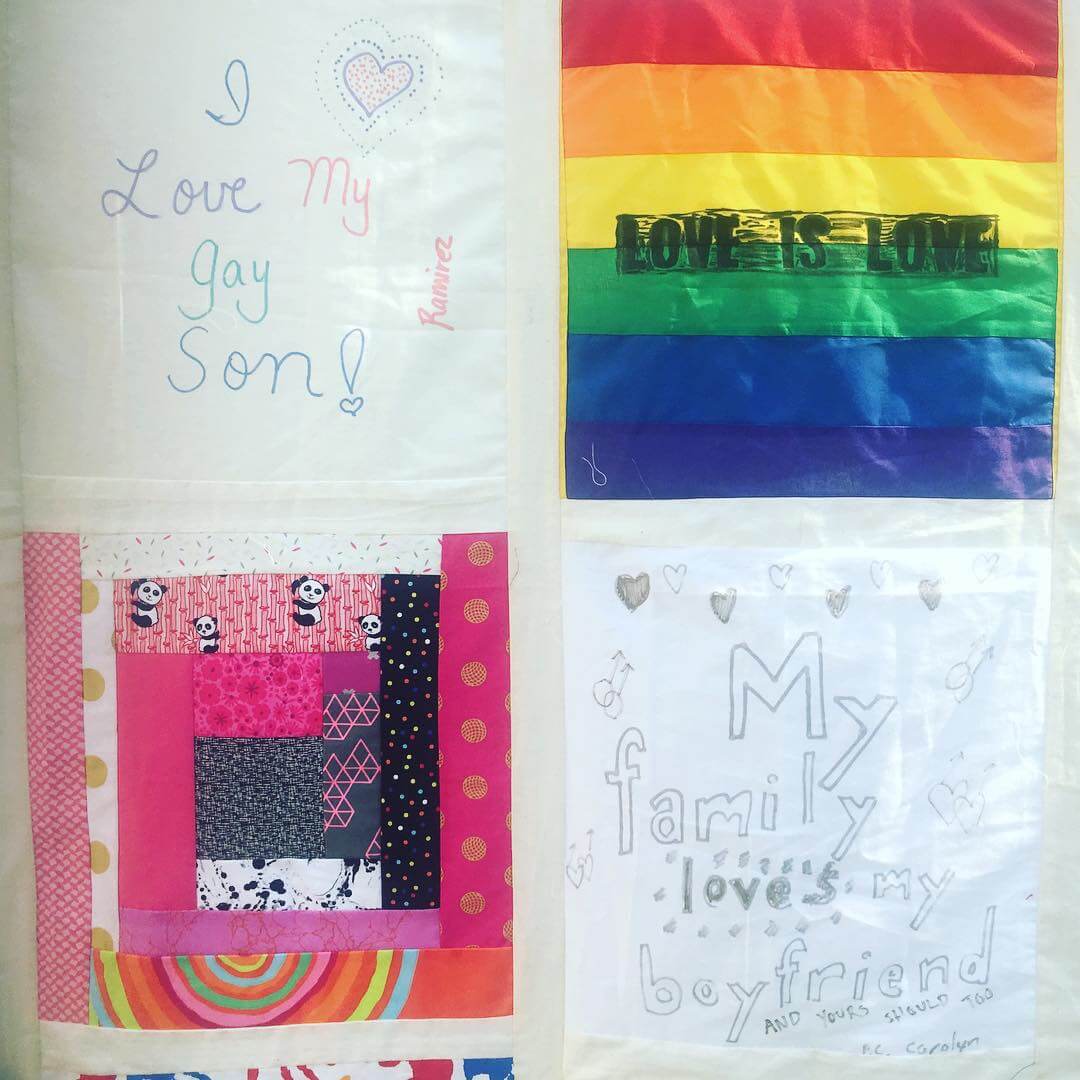 That feeling — that the world might be better off without you — is one many other queer and trans youth might experience in a state that provides few opportunities to feel validated and loved for who they are. Suicide is among Utah’s leading causes of death for young people between the ages of 11 and 17, an oft-cited statistic.

Some say the phenomenon is fueled by the intense isolation faced by Utah’s LGBTQ kids, along with an LDS doctrine that tells them they aren’t enough.

Today her son is happy and engaged to a “wonderful man.” But when he was at his darkest, Draper said that seeing people like himself celebrated despite Utah’s inbred religious conservatism would have meant the world to him.

“I wish I had examples [of out LGBTQ people] at a parade to point to,” she claimed. “That would have been really powerful for him.”

Draper got her wish, just a few years later than she might have liked. Just days after the Provo Freedom Festival blocked LGBTQ groups from participating, it reversed the decision following meetings with local advocates. PFLAG and Provo Pride filed a joint application to march together with the quilt.

The proposal was approved, but marchers had one hurdle left to clear: They only had six squares at the time.

But with just three weeks until the parade, the community in Provo quickly rallied around the project. Students from the LGBTQ group at Utah Valley University in neighboring Orem volunteered to come to her house to make squares. Locals offered their sewing machines. People mailed in designs from Arizona and Idaho.

Repeatedly emphasizing that “many, many hands” went into the quilt’s creation, Draper described the process of how it came to be as a “miracle.”

“I had all this extra fabric in my house because my mom was a quilter, but my mom was murdered, so I have all this fabric left over,” she explained, referencing her mother’s 2015 shooting death. “When I looked at the quilt, I would see, ‘Oh, I know that fabric.’ Someone had taken it and made a square with it.

“There were all these beautiful little things that happened,” Draper added.

What locals say is special about the quilt is that it takes an individual tragedy and transforms it into an affirmation of the community’s resilience.

In one particularly memorable square, the family of Harry Fisher paid tribute to their late brother and son, who ended his life at the age of 28. Fisher’s story received national attention after he went missing in February 2016, a month after coming out in a social media post. 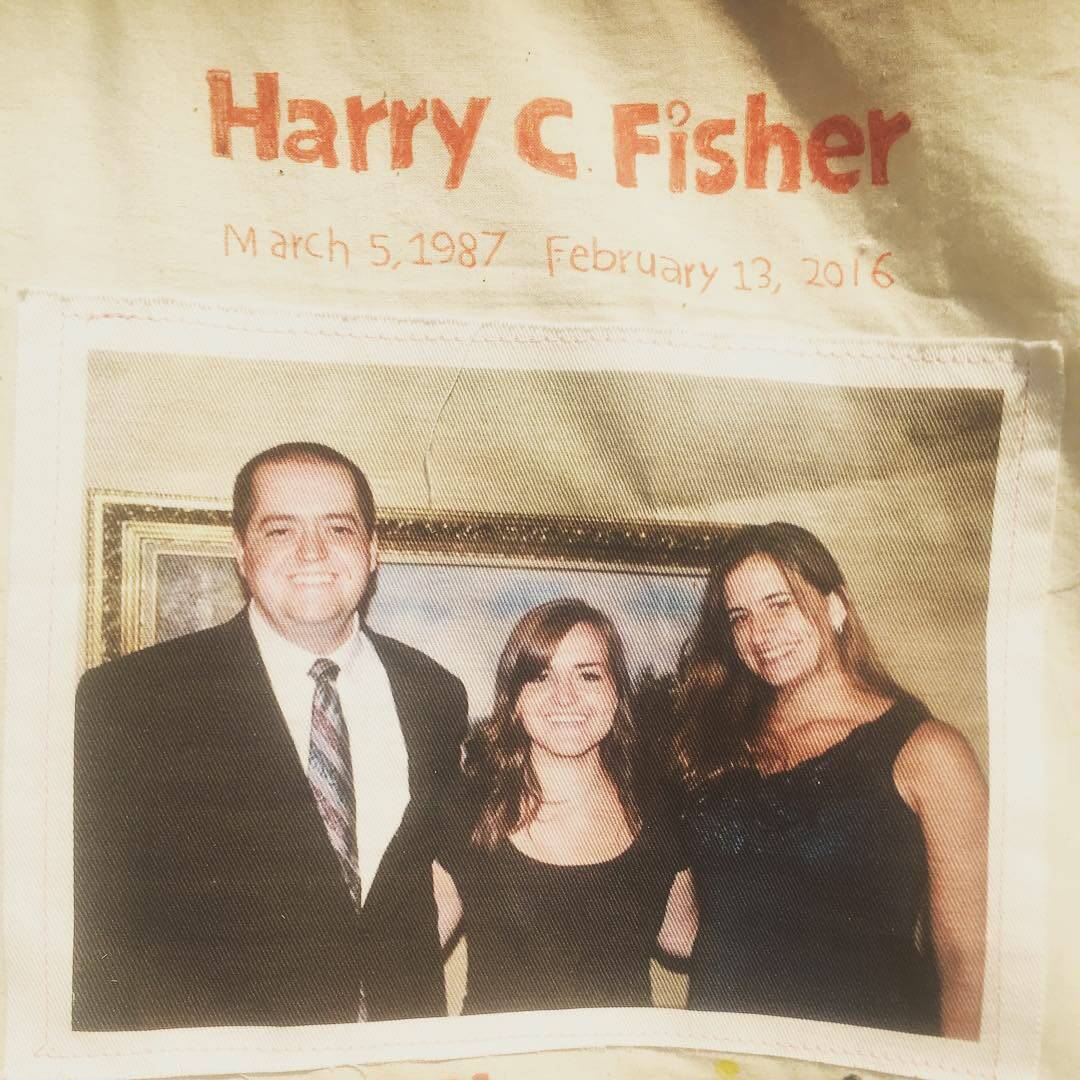 The last webpage Fisher visited was a guidebook posted to the Church of Jesus Christ of Latter-day Saints’ website. It advised him to “read the scriptures” and “trust in the Lord and look to Him for support.”

Fisher’s body was found a month later. But in the photo, he is pictured smiling, standing next to his sisters.

Chelsea Peahl, who has assisted Draper in displaying the quilt at different events in the area, often tells a story about a stranger who spent nearly 20 minutes taking in these myriad stories before approaching.

“He looked at me with tears in his eyes and he said, ‘I was around for the original AIDS quilt,’” Peahl (who identifies as nonbinary and uses gender-neutral pronouns) recalled in a phone conversation with INTO. “But that quilt meant death. This one is different. This quilt means life.

“That’s something I will never be able to forget: the look on his face and how much it meant to him,” they added.

Last week’s Provo Pride Parade, though, was the quilt’s last stop for the foreseeable future. As a pair of forest fires ravaged Pole Creek and Bald Mountain, the tapestry wasn’t strong enough to withstand the strong gusts that ripped across the town that day. It was severely marred.

Peahl said it was “devastating” to see all the community’s hard work literally be torn to shreds, but locals have already begun pitching in to ensure its restoration.

“A lot of folks in different organizations have volunteered their time and their skills to help us do the repairs that are necessary,” they claimed. “It’s very comforting to know that there are so many people who are willing and able to help us make the necessary repairs. This isn’t the end of the quilt.”

The quilt is slated to be repaired by the end of January, Peahl said. In the meantime, it will be featured in an upcoming edition of Quilt Folk Magazine.

Draper claimed its restoration is important for Utah’s LGBTQ youth. She said queer and trans kids, many of whom may not have supportive homes or families, deserve to hear the message that they are worth the effort to make space for them.

“The quilt represents that their lives matter and being connected together matters,” she explained. “One single square on its own is beautiful but when it’s magnificent is when they’re all together. What’s truly beautiful is the sheer magnitude of the size and all the effort that went into making it.” 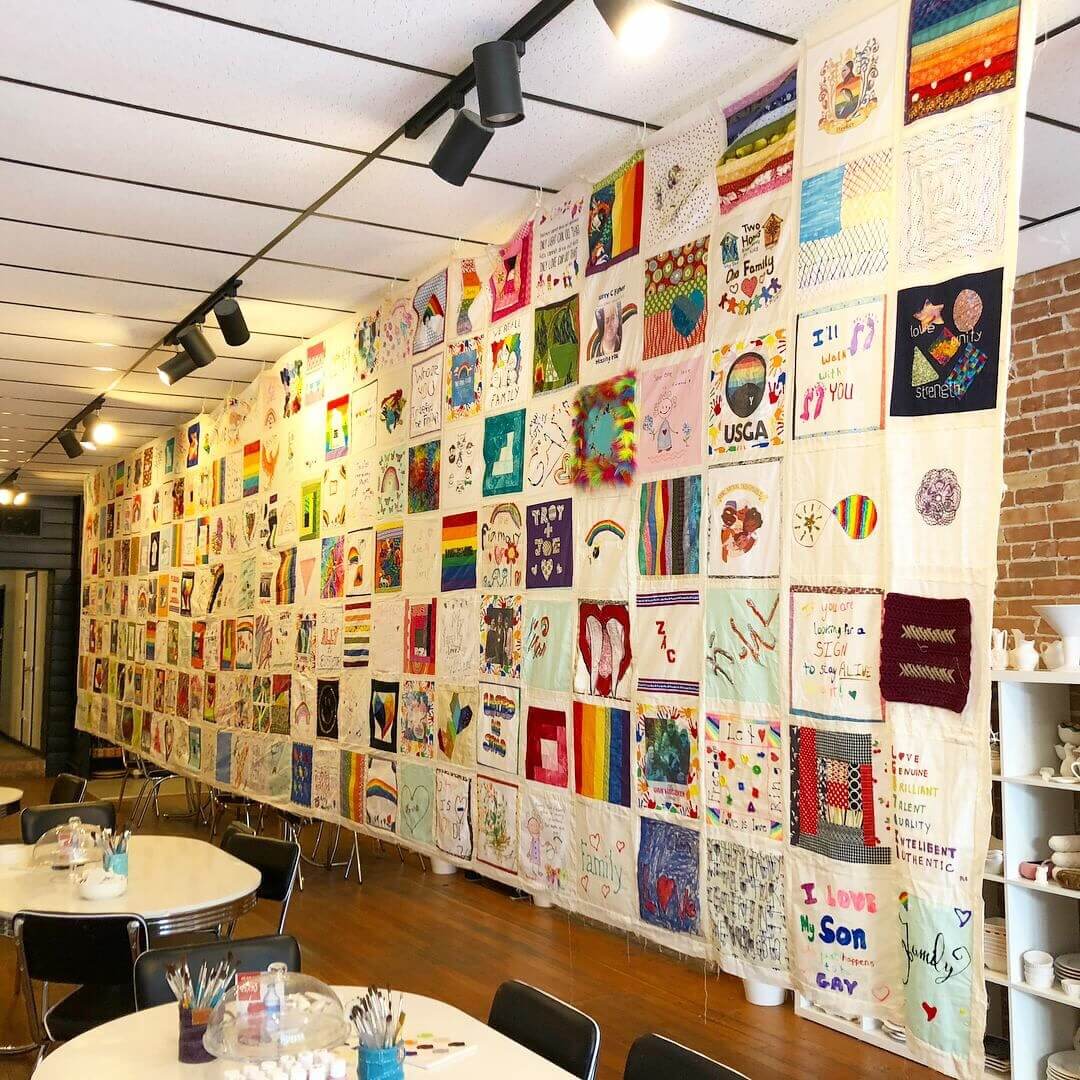 But if the quilt’s appearance at the Provo Freedom Festival is any indication, the undertaking has already been blessed by a higher power.

Although the final design wasn’t quite finished in time for the parade, marchers hoisted the incomplete banner aloft anyway — the display so enormous that it took up most of the street. With the sun radiating through the fragmentary pattern, the quilt looked like stained glass.

“It had this holiness to it,” Draper said.