AMSTERDAM, Netherlands — Do white supremacy and colonialism influence how well a Black person can live with HIV? The answer is yes, according to David Malebranche, a top HIV doctor, researcher and professor who tackled racism and HIV treatment in an emotional and applause-provoking speech at the 2018 International AIDS Conference.

As a member of the medical community, and someone living with HIV since 2007, Malebranche spoke frankly with doctors in the room about how their own behaviors might be hurting health outcomes for black gay and bi men in America.

“Most research on black [gay and bi men] ponders what’s wrong with the vulnerable community first and looks at the medical community later,” he said. “Blaming the victim never gets us far in public health, but that’s exactly what we seem to be doing.”

The focus of Malebranche’s talk, aside from racism and bias, was the HIV treatment cascade. If you’re not familiar with it, it’s basically a visual of what percentage of a population has successfully been diagnosed, referred to a doctor, made it onto HIV medication and then become virally suppressed. Thirty-four percent of gay and bi white men in America are currently undetectable, meaning they’re healthier and can’t transmit the virus. But for their black counterparts, the number is at 16 percent. 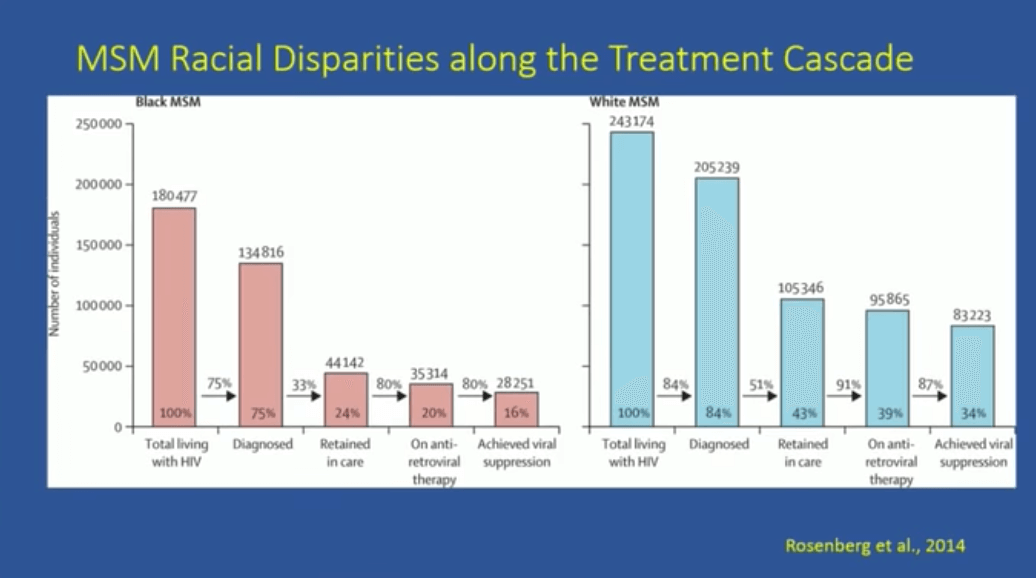 Malebranche pointed out that there are several studies that attempt to ask why marginalized patients are unable to become virally suppressed. But, all these studies have the same fault: they only ask what patients are doing wrong and often fail to examine how racism and implicit bias might deter queer men of color from seeking them out.

Rather than focus on individual-level problems, Malebranche suggested alternate inquiries.

“What about the scourge of white supremacy and colonialism that has been a global epidemic for centuries? What about anti blackness? Does the trauma of racism, implicit bias and associated microaggression influence how black [gay and bi men] navigate the treatment cascade?” he asked. “Do the power dynamics of white supremacy get in the way of optimal patient care?”

While there aren’t many studies that look exactly at what Malebranche described, he pointed to a few that unearth the ways racism impede facilities from delivering the best care. There are studies that prove that HIV stigma exists among workers in medical clinics, that some gay and bi men cite sexual stigma and discrimination as deterrents to going to the doctor, that doctors often fail to engender trust in patients of color and even a study proving that racial differences in how doctors and patients discuss adherence can affect health outcomes.

Malebranche called on future studies to examine how clinics lose patients and not why patients might have trouble being retained. Malebranche added that, too often, black patients are called “hard to reach,” untrusting of doctors or “uneducated,” which he said “[absolves] medical systems from holding themselves accountable for not just access but the quality of health services we provide.”

Malebranche drew an analogy to a restaurant inquiring why customers might not return for a second meal by studying and blaming customers’ palates rather than improving the food and service.

“Maybe as medical and research communities, we’re afraid to conduct assessments,” he said. “Maybe we’re scared of what we’re going to see when we look into the mirror.”

He added, throwing a little shade and spilling a little tea, “Maybe it’s easier to just congratulate ourselves on our efforts while we sip expensive wine in hotels at international conferences. Maybe we are so invested in our savior complexes, that we refuse to consider the power differential between medical systems and vulnerable communities may be partly responsible for why viral suppression rates are so low right now.”

Several times throughout his talk, Malebranche discussed what it means to be “vulnerable,” which in the public health world applies to populations who are often put at risk for HIV by societal drivers like racism and poverty. That includes, Malebranche listed, black and brown queer men, other sexual minorities, cis and trans women, those living in poverty, the homeless and incarcerated people.

“Often times vulnerability equals blackness,” Malebranche said of the US HIV epidemic, which disproportionately affects Black Americans. Malebranche also pointed out that gay black and bi men comprise 1/3 of new HIV infections in the US though they only account for about 0.5% of the population. Currently, most estimates show that 1 in 2 black gay and bi men will contract HIV in their lifetime.

“The global community frequently assumes that because we spearheaded PEPFAR, the United States is doing an admirable job of handling our domestic HIV epidemic,” Malebranche said. “I can assure that you we have much work to do at home.”

Part of what makes people vulnerable is criminalization and stigmatization of their sexuality, Malebranche added.

“People will choose to live in a trance-like denial of HIV, whether positive or negative, when so many of the social messages around them about HIV are negative or judgemental,” he said. Malebranche drew parallels between the high rates of HIV infection in the US South and the high number of HIV criminalization laws and convictions in those states. He also mentioned that many states in the South still have anti-sodomy laws on the books. In other countries that criminalized same-sex behavior, he said, the rate of infection is twice as high as countries where there are no laws criminalizing queer sex.

“Imagine a world where you are being criminalized because of who you naturally love,” Malebranche said. “Imagine your country saying it’s a crime for you to naturally love who you love.”

Malebranche ended his talk with several examples of how medical facilities and public health professionals can reach black gay and bisexual men without stigmatizing them. He said not to treat Black men as “hard to reach just because you don’t know how to reach us.”

“It means acknowledging that communities may know more about saving themselves than you do. It means that if you are truly committed to eradicating HIV stigma, you will stop using the phrase ‘HIV-infected’ when describing human beings in your speeches, presentations, abstracts and journal articles. Try embracing terms like ‘living with HIV’ and ‘HIV positive’ when referring to your research subjects. It means changing the stigmatizing phrase ‘retained in care’ to ‘engaged in care.’ ‘Retained’ implies possession, as if you are retaining prisoners in custody. The treatment cascade is not a correctional facility.”

“Just because something works doesn’t mean it can’t be improved.”

Malebranche ended, tearfully, by showing love to all the black same gender-loving men who have influenced him and calling for black men to celebrate intimacy with each other.

“We are much more than a hard to reach population, walking risk factors for HIV or vectors of disease transmission,” he said. “We are proud black men.”

“Let’s love on ourselves and each other.”