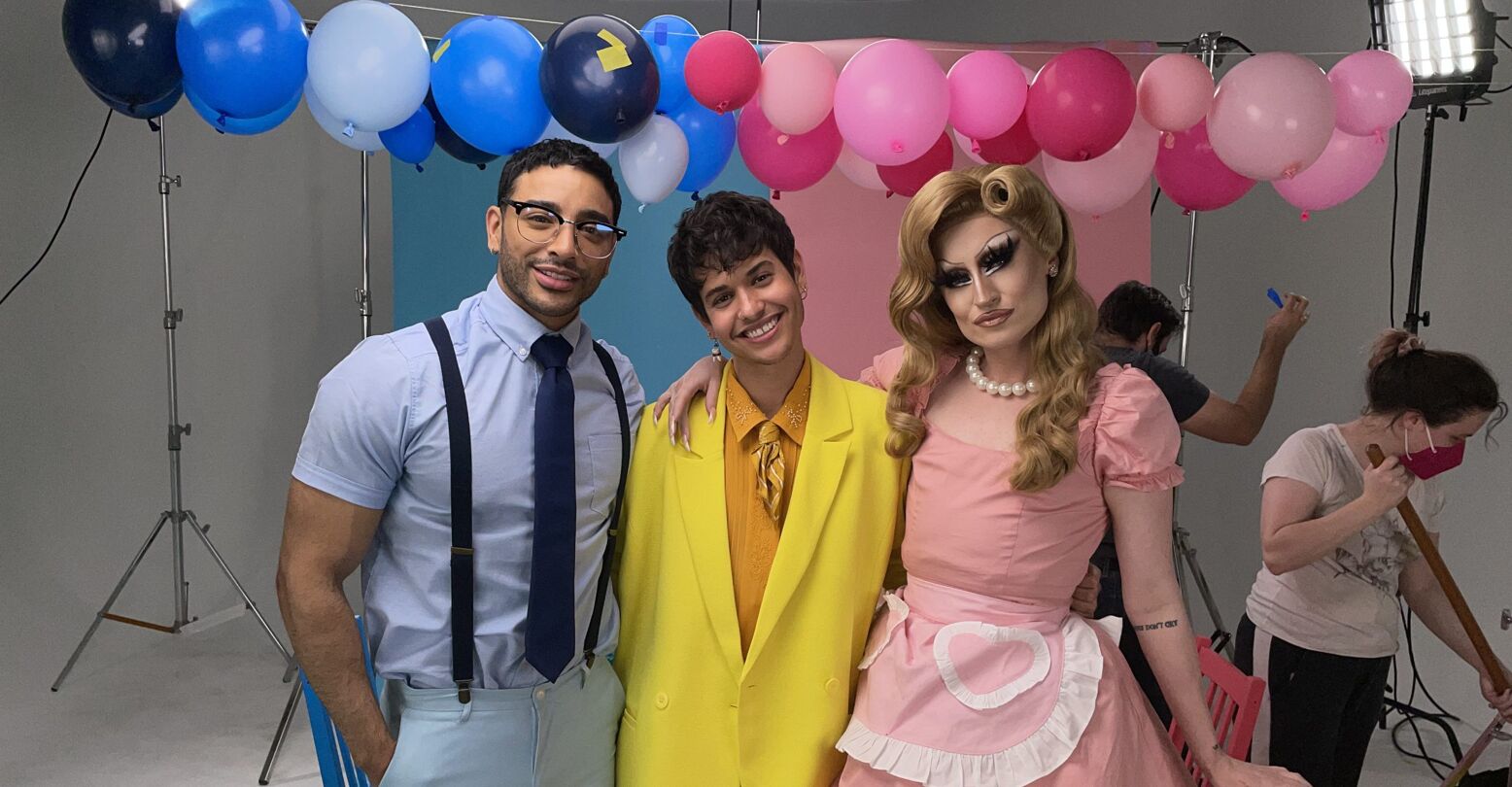 Ezra Michel is not easily defined, and that’s why we love him. The irreverent queer singer’s latest video, “Girl Baby,” tells the story of an AFAB child growing into their nonbinary identity and receiving support from their parents, who are played by trans superstars Gottmik and Laith Ashley. The video also marks the directorial debut of Bob the Drag Queen, winner of “RuPaul’s Drag Race” and Michel’s partner.

INTO spoke with Michel about the story of “Girl Baby,” how its star-studded video came together, and the unique experience of the trans masc community.

So first off, how would you describe yourself as an artist?

Ahh! My music … well, I would say I’m primarily a folk artist, but then, you wouldn’t know that because the songs that I’ve released just happened to be pop tracks. So you would know me as some sort of bedroom-pop style queer trans music artist.

I noticed in your Spotify bio, you say that your music doesn’t take itself too seriously, much like you yourself. Could you elaborate on that?

I live my life by this motto that’s on my foot  [shows foot tattoo] and it’s: “IT’S A GODDAMN JOKE.” I have been all the way to the edge, almost jumping off so many times now. And not to get too dark, but when you go to that space, it’s kind of like everything else is the cherry on top. And now my sundae is just cherries. And so I’m just sort of like, “Well, I’m gonna play here, because it’s just such a silly place, the earth and life in general.” And I get very existential very early in the morning! So I write from that space as well. And I do like to touch on real honest and vulnerable things, but with awareness of the fact that we make the meaning, basically. So if it means something massive to me, then it does, you know what I mean? But I get to decide.

Your new single “Girl Baby” is from the perspective of a parent singing to a nonbinary child. What inspired the song?

I can imagine being a parent, which I’m not, but I do have a lot of plants. And if any of them came out to me, I would just water them more, even.

But yeah, I think that I was just fantasizing about, okay, if I was a parent and I wasn’t knowledgeable about transness, but I loved my kid so much, and they were struggling, and they were going through it, and they didn’t have the language to explain to me what was going on with them — and then I was stressed, and I was scared, and I wanted them to survive. And all I was doing was just loving this kid so much, but I’m just like, “Why are you fucking crying all the time!? Like, I just love you!” And then they were like, “Oh, I’m just not a girl baby. You keep calling me a girl baby. I’m not a girl baby.” And then the parent’s just like, “Oh, it’s just that? Oh, werk. That’s fine.” Like, that’s it. As opposed to, “Oh my god!” I think that for some reason gave me so much peace to write about and to imagine. So I wrote a song about it.

I have been all the way to the edge, almost jumping off so many times now. And not to get too dark, but when you go to that space, it’s kind of like everything else is the cherry on top.

Lovely! And if you had to pick a favorite lyric from the song, what would you choose and why?

“Oh baby, where’d you get those scissors? All the Barbies are turning into Ken.” I did that. I’m a hairdresser, and I started out with Barbie hair. Because I was like, “These girls would look so good with a shag.” I just would hack away at their hair, and then my mom would be like, “These are expensive! What are you doing?” She would freak out at first and then be like, “You’re so creative!” She was one of those.

Both the song and the visual have a lot of nonbinary imagery, in the lyrics and with the pink/blue binary in the video dissolving to a mishmash of yellow. How does “Girl Baby” reflect your own relationship with the gender binary?

I’ve always been drawn to pink and blue as colors in general. Like, I’ve always been super drawn to them for some reason as a combo. And for me, I am nonbinary, and I do identify that way, but I also identify as a trans man, and I use he/him pronouns. Mostly because I feel like, well, if I am here and I don’t know why, I might as well make my existence as comfortable as possible. And I found some comfort in he/him as opposed to they/them.

I can imagine being a parent, which I’m not, but I do have a lot of plants. And if any of them came out to me, I would just water them more.

But I do feel like claiming space in the nonbinary community as well is really important for me, because it was something that I struggled with for a long time in my transition. I thought I was binary and I held myself to a specific standard of masculinity that was so unattainable because it’s not who I am.

Once I had this, like, come-to-whatever moment where I was in the mirror, and I was like, “Oh, my God, my body sucks!” And I was already really deep in my transition medically and had had top surgery and everything. And then I was like, “I’m disgusting.” I was just so dysphoric. And then I had this moment where I was like, “Maybe I’m not a man.” And then my world just melted. And I was just like, “Oh, fuck, I’m not a man. That’s why this has been hurting so badly. Because I’ve been trying to be a man as opposed to just trying to be me.”

As far as my own nonbinary journey goes, that’s kind of what it’s been like for me. It’s just been really liberating and freeing. So in the music video when the kid chops the balloon and then it’s yellow, it was a party! It was like my gender reveal party. It was like, “Oh, bitch, I’m all of it!”

Let’s talk about the video production. You’ve got Gottmik, you’ve got Laith Ashley, it’s directed by Bob the Drag Queen. How did all those people come together?

Bob and I have been dating for almost two years now. And he has so many ideas all the time. He’s always doing a million things. And he was really excited to somehow help me launch “something professional.” And I was really resistant at first to letting him help me because I was like, “I don’t want you to think that I’m just in it for the platform, because I just really like you, and if you worked at Starbucks, I’d still date you!” But then he had this idea for “Girl Baby” and shared it with me. And I was like, “Okay, that’s a really beautiful concept.”

We were brainstorming about who would play the parents. We were talking about Gottmik and then I was like, “What if Gottmik played the mom?” And then we were just like, “Oh my god, what if?” It was this big moment where we were like, “Do you think we could swing it?”

And then I was like, “Well, Laith Ashley, of course, would be my dad.” Of course! Because me and Laith, I’ve always idolized him. Since I was a teenager, I have always loved Laith. And we connected when I first moved to LA — he was like my big brother, helping me with modeling stuff and whatever, and answering all my questions. So I was just like, “Oh, yeah, duh.” But with Gottmik, I was like, “Oh my god, do you think Gottmik would do it? And then it just all came together in, like, a night. We messaged both of them and we were like, “Would you do this? And they were like, “YES,” both of them.

Then comes the day of the shoot. What was it like?

It was a long day. Working with kids is always challenging. The kids we got were actually wonderful. The baby specifically was just so good. We were like, “Wow, that baby is a good baby! Like, solid baby.” It’s kind of chaotic with kids, though, because you have to really direct them. And this is Bob’s directorial debut, so that was really interesting and fun to watch.

And then, obviously, having Laith and Gottmik in a green room together with me there, I was like, “Wow, this is quite a big splash for a first video.” But it honestly felt like we were just three trans guys hanging out. We were talking about all sorts of trans-masculine-related things, concepts — packers, top surgery, testosterone levels. When you get three trans guys in a room, we just end up talking about all that stuff really quickly. And then, like, immediately show each other our dicks.

I struggled with for a long time in my transition. I thought I was binary and I held myself to a specific standard of masculinity that was so unattainable because it’s not who I am.

Yeah, that’s another big part of it: you had an all trans masculine cast for this video, and a lot of your music is very, very specifically about being trans masculine. Why do you think it’s important to uplift and showcase the trans masc community in the work that you do?

I mean, if I’m gonna talk about something, might as well talk about this. It’s so interesting to me. I find my transness to be one of the most fascinating things about me. I have other things that are really cool, too. But there’s such a lack of conversation happening about trans masculinity because there is so much taboo around it. If you think about it, I was socialized to not take up space, right? My whole life, I was too loud, I was too much, I was too boisterous, whatever. I was rolling around in the dirt, and they were like, “You’re a girl. Stop.” And then now as I started accessing more male privilege and stuff, I’m like, “Oh my god, I don’t want to be one of those guys that takes up too much space and talks too much.” So then I also have this fear of being too much again. There’s so much to fear. And I think that there’s a big issue within our trans masculine community of just not feeling comfortable or free to take up space, because we don’t want to be those toxic men. So I think just starting a conversation about trans masculinity in any capacity is revolutionary and wonderful. So I’m starting with this.

When you get three trans guys in a room, we just end up talking about all that stuff really quickly. And then, like, immediately show each other our dicks.

That’s wonderful! So, the video’s out, the single’s out — do you have any upcoming projects that you can tell us about?

Yeah, I have a song coming out. It’s about my junk.

That’s all I’m gonna say about it. Yeah, I’m gonna keep them guessing. Because that’s quite the cliffhanger. The cis people specifically really want to know about my junk. So I’m gonna tell them about it.