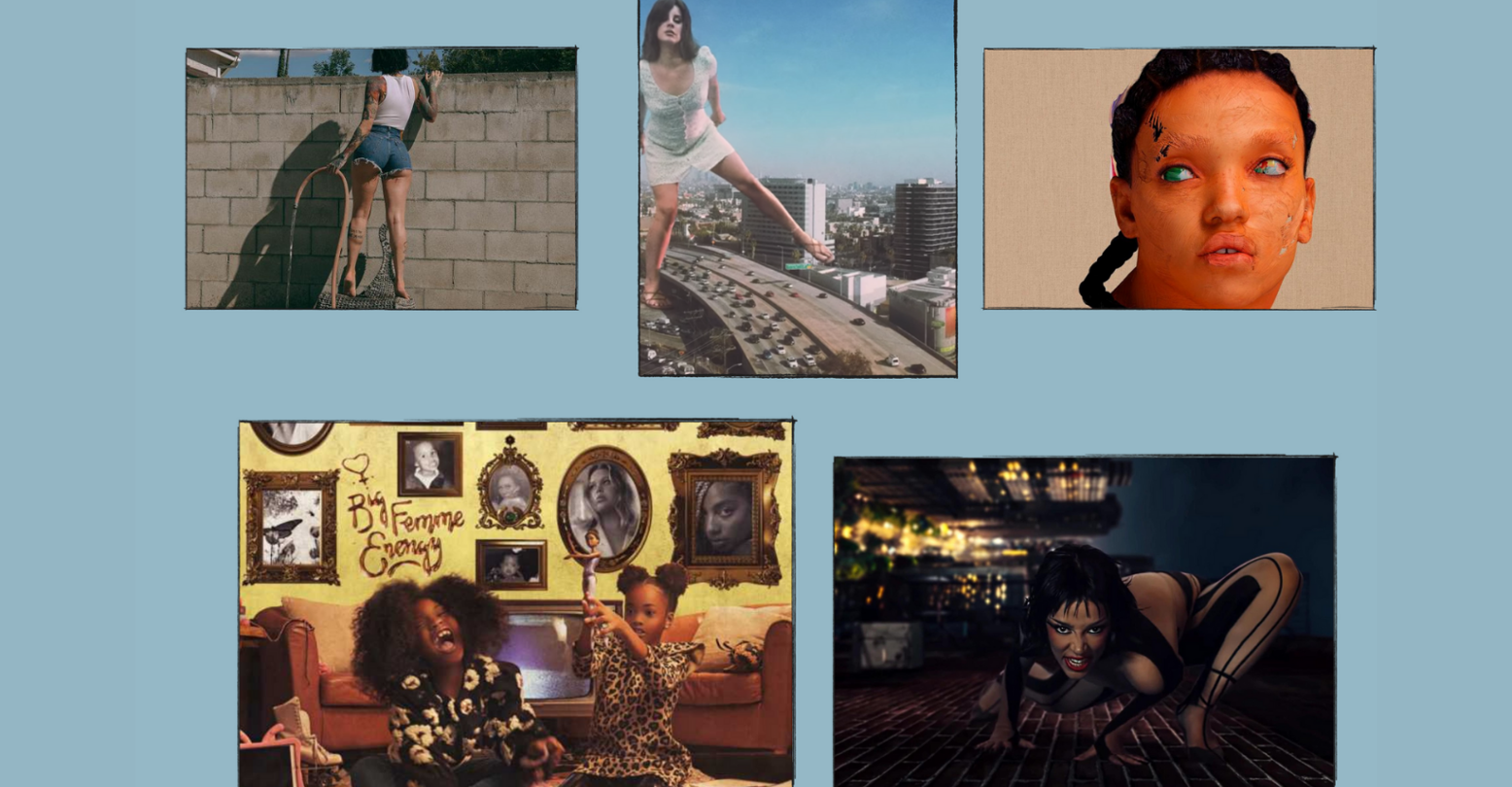 Whether you’re freshly broken up, in the process of breaking up, or just trying to process some of those big big feelings, it’s never not a good time to indulge in the fecund musical genre that is the breakup album. Some breakup albums tell the story of a single relationship coming to an end: others take a more abstract angle, diving into feelings of love and loss that aren’t tied to a single break. And still others find inspiration in the back-and-forth, the push-and-pull, the pain of being in an on again, off again entanglement.

But one thing remains clear: for those who love to wallow in pain and torment, a good breakup album in balm to the soul. Listening to your favorite artists talk about heartbreak is at once a revelation, a dialogue, and a bearing witness. In love, we’re the most human we can possibly be, for better or worse.

Iconic breakup albums comprise some of the best musical output of the past 100 years, from Fleetwood Mac’s “Rumors” to Amy Winehouse’s”Back to Black” to Julie London’s “Julie is Her Name.” But let’s face it: the past few years have been full of breakup energy, what with the pandemic, the world in total decline, and all the other shit we’ve been through.

Therefore I feel it my duty to present you with this, an offering for all of our broken hearts. The world isn’t going to get any better, but at least the music will.

Feminist music collective “Femme It Forward” came in strong with last year’s complication release “Big Femme Energy,” featuring some of the strongest, most soulful odes to a broken heart we’ve heard in awhile. But the standout–for me at least–is Australian soul singer SAYGRACE’s “If There Really Is a God,” in which she laments the pain of an aborted love affair that’s driven her to “wishing on a star, manifesting” and “praying in the dark” for guidance. “If there really is a God,” the chorus swoons, “why would she do this to me?”

If 2018’s “Sweetener” was an unabashed celebration of new love, Grande’s 2019 follow-up was a reckoning with the fall-out of a love that burned too hot to last. But for an album that easily could have been a nuance-less “fuck you” to an ex, “thank u, next” was a joyful celebration of the end of a relationship that, for so many reasons, never could have lasted. Grande takes it all in stride, talking about how she wants to eat pad Thai and relax and get a casual fuck in (“don’t want you in my bloodline/just wanna have a good time”) and how she needs some NASA (space. She needs space.)

The Weeknd knows all about that on-again off-again: he’s been doing it with Bella Hadid (and Selena Gomez) for years before allegedly settling into a cozy kind of deal with Angelina Jolie. But the final break—specifically in the case of the Bella Hadid tryst—is on display in 2021’s brilliant, unskippable “After Hours,” in which the singer goes from making fun of his famous ex for getting with someone new to make him jealous straight to recounting his own cheating episode in the studio. But the saddest, weirdest, and most fucked up track of all? That would have to be “Repeat After Me,” in which he says over and over (more to himself than anyone else, it would seem) “you don’t love him/ you don’t love him/ you don’t love him if you’re thinking of me.”

The goddess that brought us 2020’s anthemic “Josslyn” quietly released an absolutely brilliant EP last year that recounts Olivia’s falling in–and out–of love with a dude who refuses to love her back. “Any girl you fuck probably listens to my music” is such an elegant burn: even though O’Brien explores the limits of fame in tracks like “Call Mom” and “We’re All Gonna Die,” she knows that the ultimate revenge is knowing who you are, even when a broken heart tries its darndest to threaten that sense of self.

This was the album that turned Doja from a meme into a verified superstar, and it’s no wonder why: this shit is a track-by-track wonder. But inside of some of the more celebratory pop hits like “Cyber Sex” and “Say So” are buried some truly heartfelt odes to sorrow like “Better Than Me” and “Addiction.” “You held me so down/so down I never grew up,” she sings on “Streets,” recalling a relationship that she had no choice but to outgrow.

This one’s a twofer, because who does breakups like Lana? Nobody, that’s who. “Do you want me or do you not,” she asks in the opening line of “Happiness is a Butterly”, “I heard one thing, but now I’m hearing another.” The song is about a temperamental love affair, one in which–just like most of the emotionally closed-off men in the extended Lana Del Rey universe–our girl is not getting the clarity or stability she needs from her fuccboi du jour. Happiness is as fleeting as a butterfly, “try to catch it while dancing high,” but also–she seems to say–don’t try to spend your entire life dancing high just for the sake of a happiness that requires too much work to be truly sustainable. This album is drenched in post-breakup sadness, from the tender “California,” in which Lana promises an old lover that if he comes back to L.A. she’ll throw him a party, take the liquor from off the top shelf, and dance with him ’til dawn, to the unexpectedly beautiful Sublime cover “Doin’ Time,” in which our girl refuses to gender-swap the lyrics, singing distantly about the girl she loves so bad, who “spreads her loving all over and when she gets home there’s none left for me.”

“Blue Banisters”, LDR’s second release from 2021, dives even deeper into this blue period, painting Lana as a post-breakup goddess, surrounded by the women that love her and will protect her no matter what. Men come and go, but women, like the “Sweet Carolina” of the album’s final song, will always be there for her, helping her rebuild herself after yet another romantic undoing.

This, as they say on TikTok, is the pinkprint. The ultimate, pissed-off bitch album that gave every man, woman, trans person and child a reason to get up and scream in the morning singing along to “Under the Table.” After decades of being called “difficult” and ignored by a music industry that turned a blind eye to her suffering and abuse, Fiona Apple came out with a gourd-shaking, earth-quaking, howling, yelling, primal screaming album that let loose all the pent-up anger of the past ten years. It didn’t take long for Apple’s autobiographical songs of suffering to strike a universal chord. Who among us, after all, hasn’t been carrying a heavy balloon all these awful years?

Drawing on fairy tales and fables for 2021’s pensive EP, artist CHIKA gave us plenty of food for thought in the tracks “Cinderella 1 & 2”, in which the out-bisexual artist rejoices in finding someone perfect for her, only to have her run away.

If you haven’t scream-sung along to the lyrics “Don Julio made me a fool for you” at some point in the past year, don’t ever talk to me again. Kehlani is the queen of breakups, and this album rolls all that pissed off, heartbroken energy into one album-length tale of longing and self-realization. “Toxic?” Anthemic. It’s giving “The Drugs Don’t Work” for a new generation.

All too sadly, we know a lot about the hell Shia LeBoeuf put FKA Twigs through in the course of their abusive relationship. Releasing one of the best albums ever doesn’t make up for the pain and abuse FKA Twigs suffered, but “Magdalene” is still a jaw-dropping achievement, looking critically at the feminine trope romantic softness through the story of one of history’s most masochistically selfless women, Mary Magdalene, the sex worker-turned-saint who washed Jesus’s crusty-ass feet back in the day. Twigs understands the power of suffering as well as the need to break out of it and re-establish power, especially in the tracks “sad day” and “home with you.”