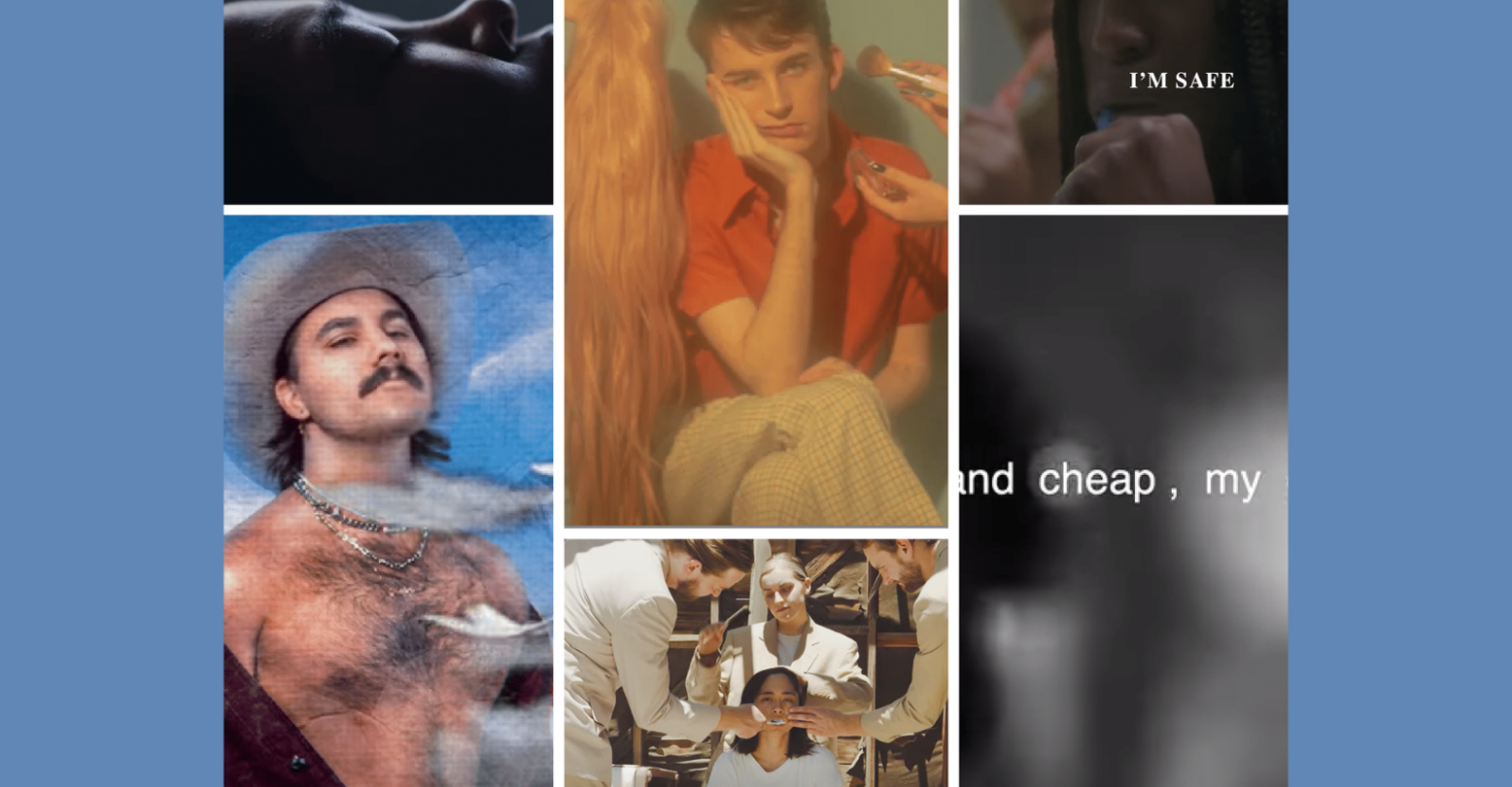 It doesn’t take much to convince me that music is sacred. Spotify, filled to the brim like the great Library of Alexandria, is a resource of biblical proportions. 70 million tracks patiently sit silent, waiting for you, anticipating a life catalyzed by the click of a listener’s mouse. With such an expansive collection, the possibilities for musical compilations are dizzyingly limitless. And yet, it is through the narrowed lens of deliberate orchestration that making a playlist becomes a practice akin to praying.

Even though publicly posted playlists, much like prayers, tend to go unanswered. The shared anonymity of Spotify users and God alike suggests someone, somewhere out there, is still listening to your music. As a fleshy finger presses into a playlist’s “like” button anonymously, two strangers come together in an agreement solely through the intimate languages of music. Personal appearance, intelligence, and mannerisms all disappear as the music alone stands to be the only deciding factor behind the connection.

Of course, a playlist can be arbitrarily thrown together, but within any compilation of songs lies the ability to hold a narrative. Just like a pop star tells a story on an album, the average person can articulate and share their own experiences with a carefully crafted playlist. Alas, we can’t all be pop stars. But these 15 queer artists on the rise in 2021 certainly can and will become stars. So we at INTO put together a playlist featuring the up and coming queer musicians of Gen Z.

Justy  bursts onto the scene with her debut album Pain with Benefits. Featuring a seamless three-song run of “Letting Loose,” “Rinse, Repeat, Regress,” and “Expectations,” Pain with Benefits reimagines the swagger of hip-hop through the quiet confidence of traditional jazz. If you like Anderson Paak, you’ll love Justy.

Rocking a ‘stache and cowboy hat, Michael Medrano just dropped his latest single: “Personal Heaven.” Angelic synths harmonize with Medrano’s dreamy soprano on this lovesick pop song. Paired with another single, it seems as though Medrano just might be gearing up for his debut album.

Inspired by the bedroom pop of Clairo, Daphne Jane put together her own collection of tracks titled I Wish I Was In The Clouds. Packed tight with melodic guitar twangs and simple albeit hypnotic beats, I Wish I was In The Clouds boasts a dreamy sound; the likes of which is only grounded by Daphne Jane’s lyrics that read like diary entries. Overall, it’s giving lesbian Golden Hour by Kacey Musgrave vibes.

BONNIE PARKER recently released their EP ACTRESS. Fronted by Andrew Muccitelli, BONNIE PARKER rocks like the Beach Boys if the Beach Boys were sad and kissed each other. With moody singles like “Jason” and “Nicotine,” ACTRESS injects queer heartbreak into the indie-rock scene.

Singing and producing go hand-in-hand for Luna Li, the artist behind Flower (In Full Bloom). A violinist, pianist, harpist, and guitarist, Luna Li recruits a full orchestra to entrance each listener. “Cherry Pit,” “Afterglow,” and “Trying,” play one after another on a tracklist that is fashioned much like a dream sequence. As the force of nature behind the EP, Luna Li reveals herself to be the whimsical fairy found asleep and dreaming in the unfurled petals of Flower (In Full Bloom).

Fear takes on a life of its own on Zeph’s latest EP Scared of Everything. The project itself divulges her deepest insecurities much like the titular phrase promises. But while Zeph’s fears spill over lyrically, she is anything but fearful as an artist. Stand-out songs like “scared of everything,” and “are you?” coat Zeph’s indie-alternative emotions in the sticky, sweet style of pop.

Non-binary artist NoSo returns to music with their newest single, “Suburbia.” Accompanied by slick guitar riffs, they lament heartbreak in suburbia. Noting no absence of “rich kids and boutique drugs,” NoSo works through loss in a place where everything stays the same, all the time.

Following a trail of popular singles, Amindi finally debuted her first full-length record, Nice – and it was well worth the wait. Just when you think you know where Amindi is going, she ducks left and switches up her sound. Stylistically unpredictable, Amindi flows over everything from jangly guitar on “great again,” to bouncing the R&B beat of “slideshow.”

Reigning from north London, Joviale hits the music industry hard with their most recent four-track EP, Hurricane Belle. Incredibly deliberate but impossible to pin-down, their genre-defying sound expands and contracts at the whim of Joviale’s emotions. Heartbreak homilies “Blow!” and “Glass Peach” capture the contradictory co-existence of Joviale as both the chaos and the eye of the storm that is Hurricane Belle.

Evann McIntosh presents Character Development the EP. Low and slow with a steady bassline, McIntosh grooves along to the sounds of alternative R&B. Even as McIntosh locks down the fundamental snap and pop of percussion-based production, Character Development remains ambitiously soulful with lush vocals and laid-back guitar licks.

Taking in pop music for all it’s worth, THE BLOSSOM rethinks the catchy repetition of contemporary melodies for their breakout EP 97 Blossom. Temperamental acoustic guitar is a staple for THE BLOSSOM’s genre-curious style. Stitching together R&B and indie-pop, “SMOKE” cleverly recruits Brockhampton’s Matt Champion. The EP’s follow-up single, “Spike Collar,” hooks the listener with a rock’n’roll riff that calls for barking at the sun and the freedom to run.

New to the game but not the art of the craft, HAWA was one of the New York Philharmonic Orchestra’s youngest composers in history. Insatiably ambitious, HAWA packed up their classical expertise and traded in orchestral symphonies for the lyrical flows of rap. The sharp, multi-faceted production of their prolific EP the ONE (2019) easily sets a precedent for the immaculate quality of HAWA’s future projects; the high bar of which is consistently raised just to be scaled once again as HAWA continues to outdo themselves with their latest project, “Wake up.”

Bonafide indie-rockstar Hana Vu takes every risk on Public Storage, their most popular release to date. Powdering rugged rock with sprinkles of pop synth, Hana Vu knowingly wrestles with multiple genres at once. The crashing hi-hats and booming kick bass of “Everybody’s Birthday” brings to light the record’s fixation with hitting every musical note right at the height of its sound.

Lexi Vega is the face and voice of the electrifyingly pop-y indie band Mini Trees. Dissolving the definitive boundaries between pop and alt-indie, Mini Trees consciously decides to be both on her first full-length record, Always in Motion. Describing her sound as “living room pop,” Vega expands upon the concept of DIY bedroom pop by pushing the genre out into the open. Truly at their best when played in a crowded room, songs like “Underwater,” and “Carrying On,” commiserate on teen moodiness as a socially shared affliction.