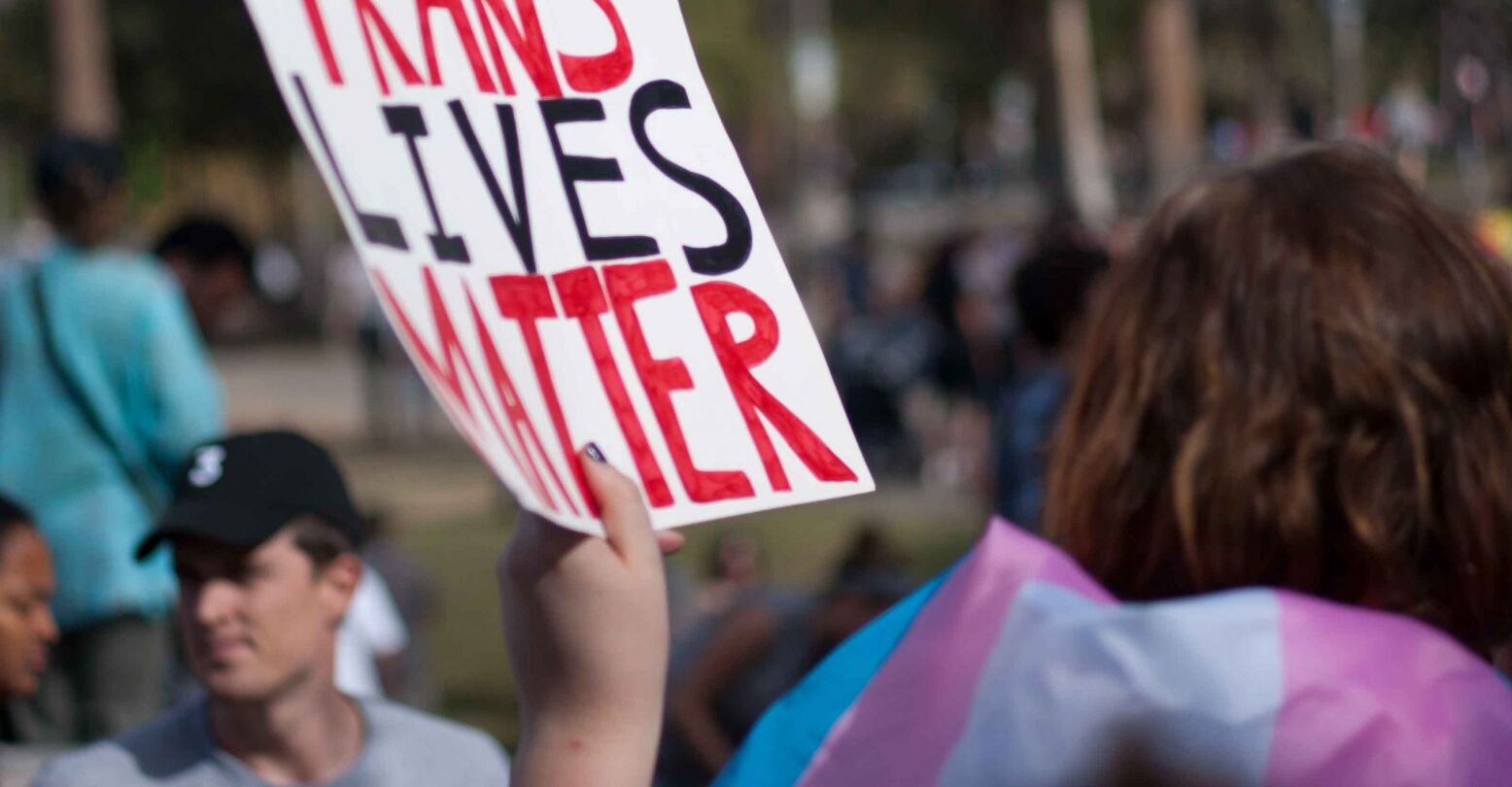 The internet works in mysterious ways sometimes, and Twitter trends are no exception.

Seemingly out of nowhere, the hashtag “#CisWithTheT” started trending in the United Kingdom and elsewhere today, with many people — but mostly cis white women — declaring they are comfortable with trans women in women’s spaces and beyond.

reminder that a large majority of cis women and men support transness. terfs are a small amount, just loud and cruel enough to feel like the majority. keep your head up. #CisWithTheT pic.twitter.com/NXAricHbf0

It may seem like the hashtag came up randomly, but it follows a visceral amount of transphobia in media and public discourse over recent days. Besides the ongoing controversies surrounding Dave Chappelle, trans youth in sports, and the usual-but-still-ridiculous “pronouns are stupid” declarations, a BBC story was published this week with the title, ‘We’re being pressured into sex by some trans women’.

The story cites a study by “Get the L Out,” an anti-trans organization, purportedly reflecting the perspective of several lesbians who claim that they are being targeted for being anti-trans or not wanting trans women in cis women spaces.

As the title of the article suggests, several claim they and others have experienced “pressure” (as is used several times in the story) from trans women to accept having sex with them. One person is reported as saying that people “would rather kill me than Hitler” and even tweets and quotes included by other trans people that support lesbians’ efforts to exclude trans women.

Yesterday, another @BBC article unleashed a further wave of transphobic hate on the community. In response, #CisWithTheT is trending today. You as well can show solidarity to the trans community by posting a msg under the hashtag

Despite the backlash, of course, the BBC has stood by their story in a statement and asserts that it is editorially sound, even though if you accept their own story’s reporting on its face, the so-called “pressure” being experienced by cis women is only from “a minority of trans women.”

Still, the report only encourages TERFs and anti-trans advocates, such as the LGB Alliance, who is even quoted in the BBC report as being “particularly concerned about younger and therefore more vulnerable lesbians.” With their scaremongering being furthered, the anti-trans group has tried to assert that the Twitter hashtag is an attempt to “silence” TERFs and cis women and lesbians.

Some have even pushed “#IStandWithLesbians” as a retort and claim that the hashtag attacks those who have been raped, although only one such allegation is reported by the BBC and is not the focus of the article or subsequent tweets.

Yet, much of #CisWithTheT is cis women speaking up for themselves, seemingly unfettered.

I am a cis woman and I want to shout that trans women are women. I will always welcome you here. 💜 #CisWithTheT pic.twitter.com/KL5YDXsPCN

Cis lesbian here; I am not threatened by trans women using female spaces (where they belong) or using the term 'lesbian'.

What I /am/ threatened by is people constantly weaponising me against my trans sisters and policing gender non-conformity.#CisWithTheT

#CisWithTheT currently trending at Number 4 in the United Kingdom.

Because, as nearly every poll shows (except the ones conducted amongst 80 hand-picked transphobes), the majority of cis women support trans inclusivity, but are silenced by a minority of hateful bigots.

I'm a CIS woman and am furious on an almost daily basis by the increasingly absurd actions of the toilet obsessives. Trans women are most definitely welcome to use the same spaces as me. Love to our trans sisters #CisWithTheT

Several other people spoke up too, on behalf of trans women and others in the community.

Seeing #CisWithTheT trending genuinely makes me happy, it’s way too easy to get overwhelmed by the voices of the rabble sometimes and forget how many cis folks are on our side.

Trans Woman here, its probably obvious that the BBC article turned my world upside down. Life atm is incredibly hard for us & yesterday really didn't help! I went to bed feeling lost & alone,

Waking up today to see all the love & support from #CisWithTheT really helped! Ty ❤

I’m a cishet woman and I’m genuinely terrified of the GCs who try to reduce my womanhood to just my genitals and organs. I’ve been questioned in a toilet once because I’m tall, broad shouldered and dress tomboyish. GC ideology is a threat to all people #CisWithTheT https://t.co/HiYX25x7k4

TBH #IStandWithLesbians too – because all the queer, cis women I know agree that trans women are women and thought that the BBC News article was badly researched and massively offensive. #CisWithTheT

Trans people are being monstered exactly as gay and bisexual people always were – as would-be sexual predators, recruiters of children, defiers of biological reality, sufferers of a mental condition, creepy fetishists, and so on.

Stand by our trans siblings 🏳️‍🌈🏳️‍⚧️#CisWithTheT

Others made a point to note that while making tweets in support of trans women is fine and dandy, there is much more that needs to be done to protect trans and gender non-conforming people, especially as a litany of anti-trans laws here in the United States continue to take effect and anti-trans rhetoric continues to find a home in mainstream media outlets.

I know many of the #CisWithTheT posts are talking about trans women because of the BBC's bullshittery but, for the cis allies out there, can you acknowledge the trans men well? They are so often overlooked because of the hyper focus that GCs have on trans women.

If the cis allies tweeting #CisWithTheT would like to prove that their allyship isn’t just performative and donate to some trans crowdfunders, that’d be great.

It goes without saying that the last week has been really hard for our community, sadly so are most weeks, so while you're sharing your support with a hashtag, please do also reach out to any trans and non-binary people in your life, and check in to see how they are. #CisWithTheT

Thankfully, while some responses may be performative, many others are committing themselves to supporting trans people beyond typing on their keyboards.

I was hesitant to QT this as it might seem performative.

But being accused of performativeness is better than thinking silence is disagreement.

So yeah, I wholeheartedly support trans inclusion in women's spaces & would 100% Go Off at anyone I saw trying to exclude#CisWithTheT https://t.co/9szTd7IxJh

I am a cis woman begging transphobes to stop tweeting because every time they do I have to donate to @Mermaids_Gender and honestly it's breaking the bank #CisWithTheT https://t.co/52kYtw9eD7

Since the BBC is at it again, we should not only raise our voices but also our funds to support trans folks at this time.
Below is a thread of trans supporting organisations we can donate to. Also, any trans people with fundraisers, drop your links in the mentions.#CisWithTheT

I am a Black, cis, enby, lesbian, survivor of sexual abuse who has no problem sharing a bathroom with other women or competing with other women in athletics – including transgender women. Unapologetically #TeamTrans All day, Everyday! #CisWithTheT #MeToo