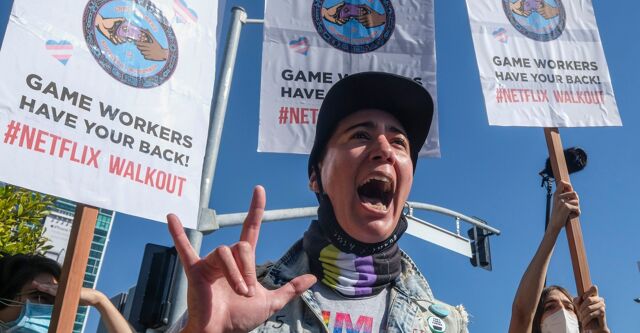 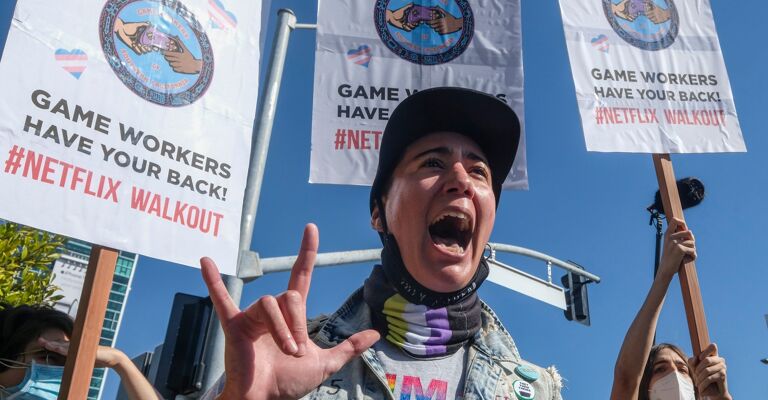 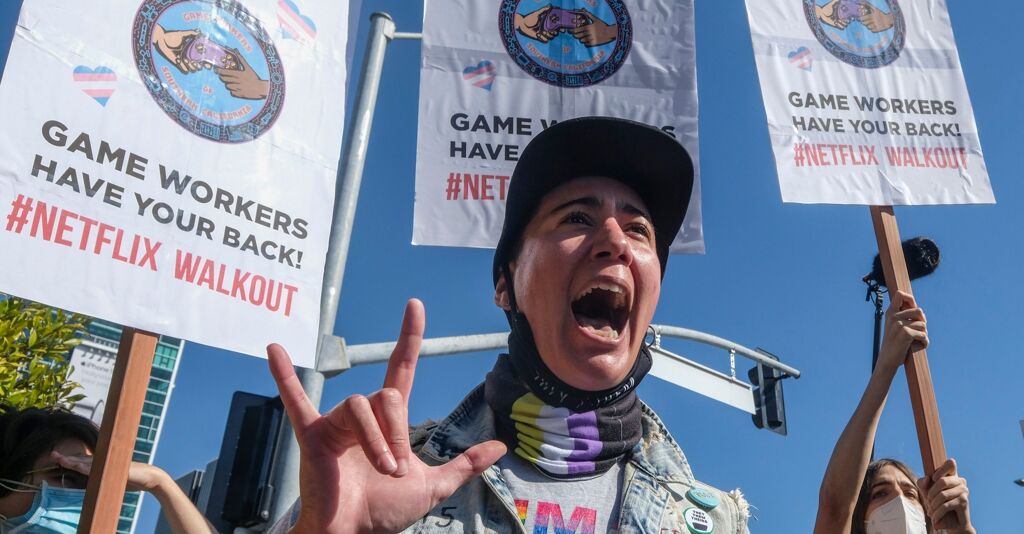 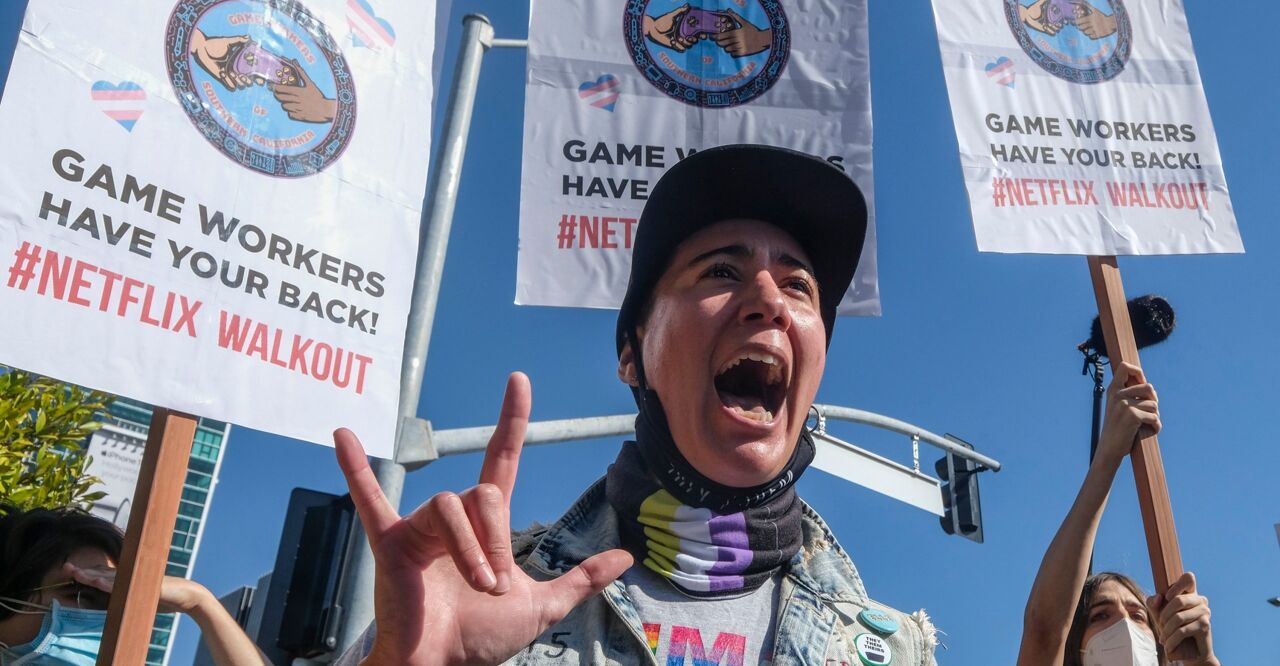 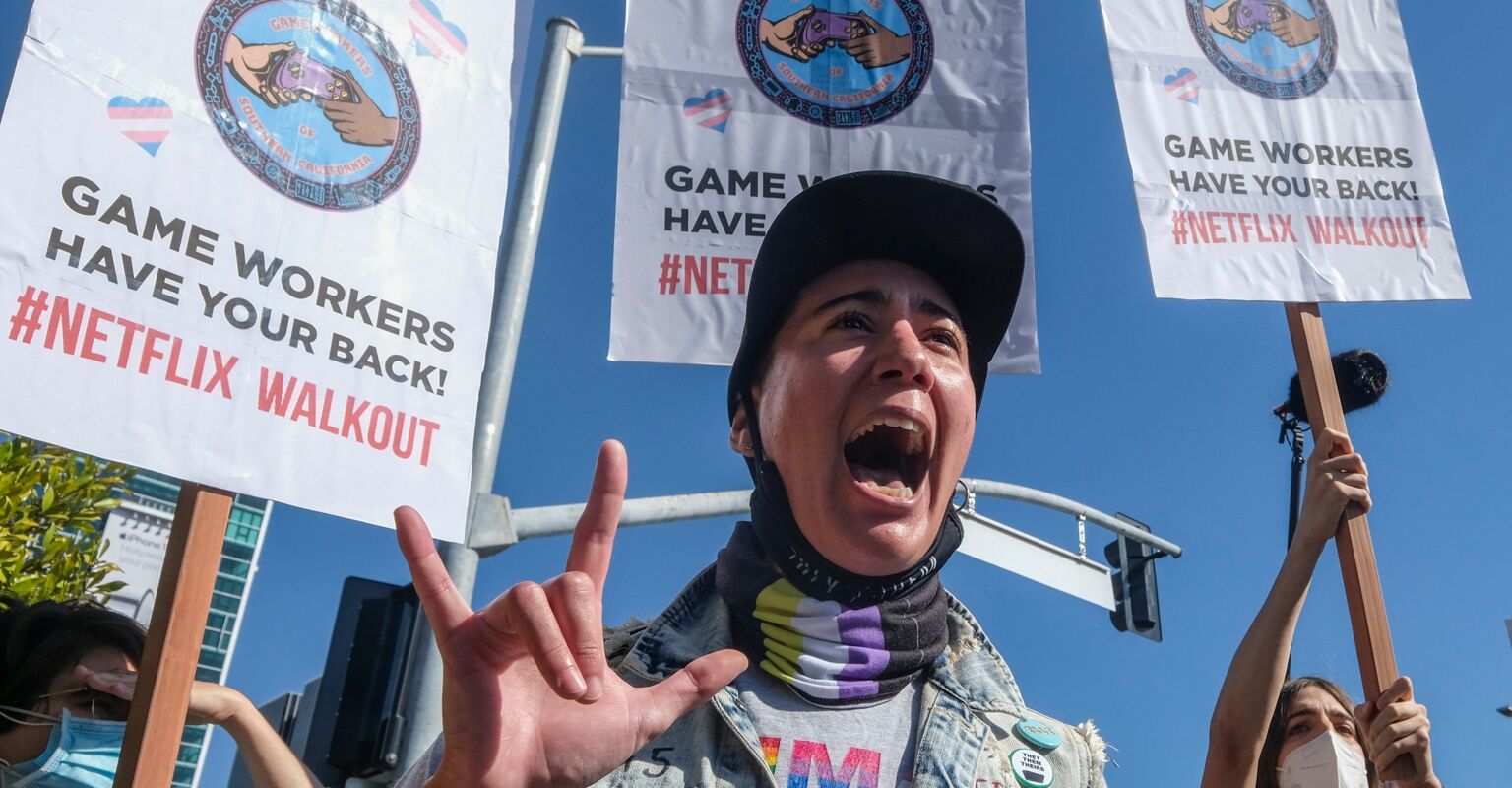 Activist Ashlee Marie Preston led organizing of the event from outside the company alongside the internal staff, most of whom are part of an employee resource group team dubbed Team Trans.

This Wednesday, Netflix co-CEO Ted Sarandos will be presented with firm asks/demands from Netflix employees that we will also be sharing with members of the press & rally attendees. Cross-cultural solidarity is an indomitable force that moves all of us forward. Come and join us. pic.twitter.com/cZbZFLBEfG

Several appeared in a video explaining the situation and expressing solidarity with the rally, while others took to social media to share their thoughts.

Standing in solidarity with the Netflix employees speaking truth to power today and sending my full love and support. #NetflixWalkout https://t.co/xrdsOpEJFP

Ditto. The Netflix workers walking out today are fighting for a more inclusive workplace and entertainment industry, and I stand in solidarity with them. Trans rights are workers rights. #NetflixWalkout https://t.co/V5wrA2xFfp

#NetflixWalkout If you're not standing up for trans lives, you need to take a good look at who you ARE standing with. Good luck today everybody! ⚡️🎸⚡️

Had a great convo with comedian Miss Sophia recently. I reminded her of how our people will sit around & READ for blood and ALL be dying laughing. Even the person being read. Laughter is like medicine for a broken heart. Humiliation is comedy for the inhumane. #netflixwalkout

I stand with those participating in the #NetflixWalkout. I'm glad that after multiple dismissive statements Netflix is finally acknowledging they have work to do. I look forward to seeing how those words become actions.

I stand in solidarity with the trans community and support the #NetflixWalkout with all of my heart.

As the #NetflixWalkout and Stand in Solidarity rally begin, GLAAD stands with and thanks the Netflix employees, allies, and LGBTQ and Black advocates calling for accountability and change within Netflix and in the entertainment industry as a whole. (1/4)

… and the entire industry as part of long overdue conversations about diversity, equity, and inclusion. (3/4)

Netflix now needs to take swift and strong action to address the calls for change from the community and their own employees. (4/4)

Today, Preston wrote under a post on Instagram, “Yesterday was a powerful moment.🌞 Not just for the Trans/NB/GNC community and the @Netflix employees that walked out, but for every marginalized community working tirelessly to build safe, equitable and dignified lives.”

Preston continued, “There was plenty of dialogue about the harmful content that lead to the walkout but I’m making this post to reiterate that this moment is much bigger than Dave Chappelle. They’re trying to distract us by gaslighting us around the harm the special caused, accusing us of ‘cancel culture’ after we’ve tried facilitating transformative dialogue, and have hurled insults at us for not ‘being able to take a joke.’ We can take a joke; but when the jokes take lives—it’s no longer a laughing matter. What we’re truly up against is the emergence of a ‘Hate Economy.'”

Yesterday’s walk out drew hundreds of people in support of transgender people, so much that the rally had to move to a different location to accommodate the overflow.

There were also a flurry of TERF (or, as some of them prefer to be referred to, “Team Dave”) supporters who came as a form of counter-protest, either supporting hate speech, or objecting to trans people and trans allies exercising their free speech right to not support hate speech.

Outside the @netflix offices in Hollywood. As employees hold a walkout over Dave Chappelle's #TheCloser, counter protesters try to drown them out. @BNCNews pic.twitter.com/kqRR6ClgnI

A couple of people with signs supporting #DaveChappelle try to interrupt a rally in support of a Team Trans employee walkout outside the #Netflix building on Vine in #Hollywood. @CBSLA @KCBSKCALDesk pic.twitter.com/H72Tmuqdbs

“We are protesting this walkout. They have the right to do it, but we have the right to standup for Dave Chappelle and his freedom of expression,” said Gigi LaRoux, who identified herself as a supporter of comedy. https://t.co/DJttIPDjLA pic.twitter.com/VcXyiwRvXR

In response to the walkout, Netflix issued a statement reading, “We value our trans colleagues and allies, and understand the deep hurt that’s been caused. We respect the decision of any employee who chooses to walk out, and recognize we have much more work to do both within Netflix and in our content.”

That “value” and “respect” didn’t lineup with Netflix’s actions. Part of what prompted the protests against Netflix was their decision to suspend Terra Field, a trans queer woman and a software engineer at Netflix who wrote a viral thread of tweets explaining that trans people weren’t offended by Chappelle’s special.

Netflix suspended her after for trying to attend a meeting she had been invited to regarding the response to the special. The decision was later reversed, and Field took part in the walk out yesterday.

After the walk out had started being organized last week, however, Netflix fired B. Pagels-Minor, the lead staff member of both of Netflix’s Black and trans employee resource groups, who led the efforts.

Netflix also hasn’t said publicly whether or not they will discipline others involved in the walk out, and hasn’t responded to inquiries asking as much.

“We haven’t forgotten anything. Our community has a long memory.”
–@RainofTerra commenting today on the #NetflixWalkout, the company, and the #Chappelle controversy. pic.twitter.com/eoj5Gbribg

Just a reminder ahead of tomorrow's newsworthy #NetflixWalkout, I sent a request for comment last week asking explicitly if employees would face discipline if they participated in the walkout. I received no response from @netflix. https://t.co/lUQ04n7K4k

Despite the chance that they’ll lose their jobs, dozens of Netflix employees took part anyway.

Meanwhile, Netflix’s co-CEO Ted Sarandos has continued to dig a very embarrassing hole for himself in public comments. He has continued to defend platforming Chappelle’s remarks in several interviews and memo, and even tried to justify them in a statement to staff by listing a bunch of trans and queer talent or content that the network includes on their platform.

After one such named talent, Hannah Gadsby, told Sarandos that was not appropriate (in many more explicit words), he admitted that he and his company have “obviously screwed up” in their public remarks, but not in their actions.

While he tried to rephrase some of his wording, Sarandos remained behind the hard line he’s drawn on the topic, refusing to even consider including a content warning for transphobia on The Closer and refusing to restrict the content at all. He didn’t even commit to meeting with and listening to his own employees.

This comes after news reports reveal that an executive at Netflix accused of conveying “an attitude in various meetings that was not inclusive of the LGBTQ+ community” was not disciplined by the company.

While Netflix’s decision to stand behind anti-trans words, rhetoric, and actions is at the heart of the issue, yesterday’s actions and everything in response is much bigger than them or any one issue. Trans people are standing up for themselves, and now there is a growing community standing in solidarity alongside them.

A trio of protesters identifying themselves as “game workers” held signs saying trans people have their full support. Netflix leaders Reed Hastings and Ted Sarandos have identified gaming as a major growth sector for Netflix in the coming years. https://t.co/DJttIPDjLA pic.twitter.com/TjmckfEWwv

Watch the video with celebrities supporting the Netflix Walkout and more posts from the rallies yesterday below.

“If your satire is punching down, you are being a bully. It’s not funny. So I’m standing in solidarity with the folks here at Netflix who are saying, ‘we ain’t having it.’ Not on our watch.#NetflixWalkout pic.twitter.com/UOyMCKTBDp

Several things can be true. Netflix is an incredible, life changing company. And Netflix fucked up majorly. But this is a watershed moment — as Netflix employees we have both the privilege and responsibility to create change on and off the platform. #NetflixWalkout