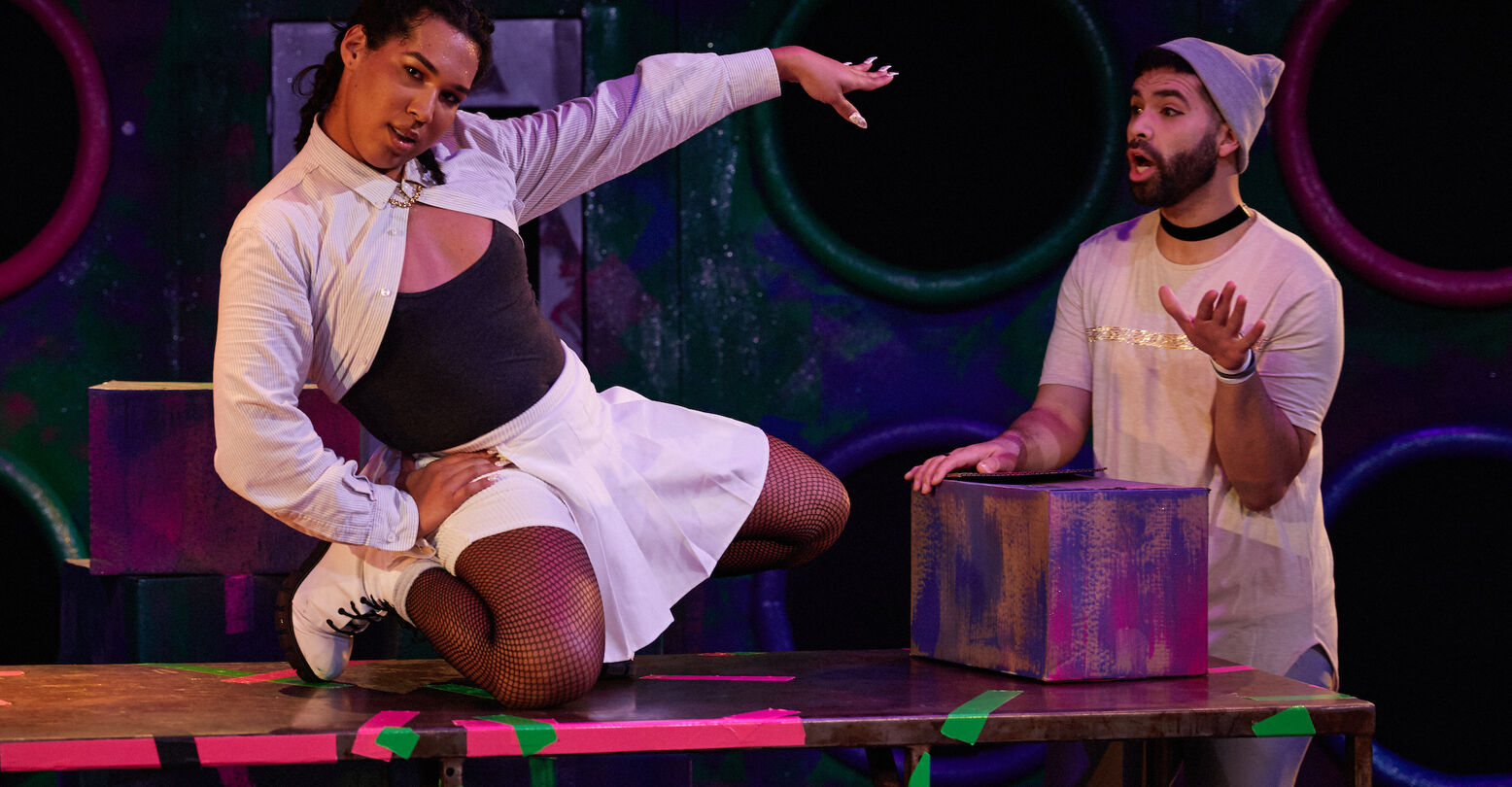 “I ain’t confused,” says Thorn, an 18-year-old genderfluid Nuyorican with dreams of appearing on America’s Got Talent, in one of many heated arguments with their volatile bae Lizard. The setting is Jamaica, Queens in New York City — and the play is C. Julian Jiménez’s Bruise & Thorn — a fantastical and brutal look inside the lives of two queer cousins with big dreams.

Bruise (Fernando Contreras) and Thorn (Jae W.B.) spend most of their days at the “Clean It” laundromat, struggling to make ends meet while its owner, Mrs. Gallo (Zuleyma Guevara), hustles in and out, secretly plotting a cockfighting side gig in the basement that could net big bucks. An unhoused person, referred to by the others as Old Fart (Lou Liberatore), hovers on the sidelines, caustically taunting Thorn but ultimately coming to their defense in one of the play’s climactic scenes.

As a multi-hyphenate theater artist, playwright Jiménez has struggled with his own identity, at one point changing his name to accommodate the industry’s systemic racism, at other times losing weight and “playing straight” to be seen as castable. “How could I be good at anything while carrying the weight of shame about my body, my effeminate mannerisms, and my ‘non-descript ethnic’ identity?” Jiménez asked in an essay he wrote last year. He describes Bruise & Thorn as a play about “the Queer body and its place in a heteronormative and binary society,” and that exploration bristles with nuance.

Jiménez’s acute observations reveal that the uncomfortableness around fluid gender identities isn’t exclusive to the heteronormative community. Thorn smacks up against resistance not only from boyfriend Lizard (Carson Fox Harvey) but also from Bruise. “I’m not judging,” Bruise proclaims. I’m just tryin’ to understand.”

“I don’t know. It’s not like I’m tryna to be confusin’,” responds Thorn. “It’s funny… the less confused I become, the more confused people seem to get. I just wake up these days and… I don’t know… feel the most me every day.”

Contreras’ Bruise, as a counterpoint, is rooted in the practical but has his own aspirations, including earning his GED, culinary school, and maybe, someday, competing on Chopped. Not wholly innocent, the act of survival weighs heavy, as he tells Thorn, “You think you gonna change the game and gonna break some trans glass ceilin’. Wake the fuck up! Look at what’s happenin’.”

With terrifying legislation moving forward in Texas, Florida, Idaho and beyond, Thorn’s words are straight from today’s headlines. Still, Bruise & Thorn ultimately rises as a manifesto of optimism with a sparkly epilogue that proclaims:

Though director Jesse Jou could accelerate the production’s pace to match Jiménez’s sharp dialogue, Bruise & Thorn emerges as a voice for not only queer representation onstage but also as an uncompromising, forward-thinking examination of identities within our community.

As Thorn raps, “Nostalgia’s for straight white dudes, they got the luxury to reflect …” Bruise & Thorn has its eyes on the future.