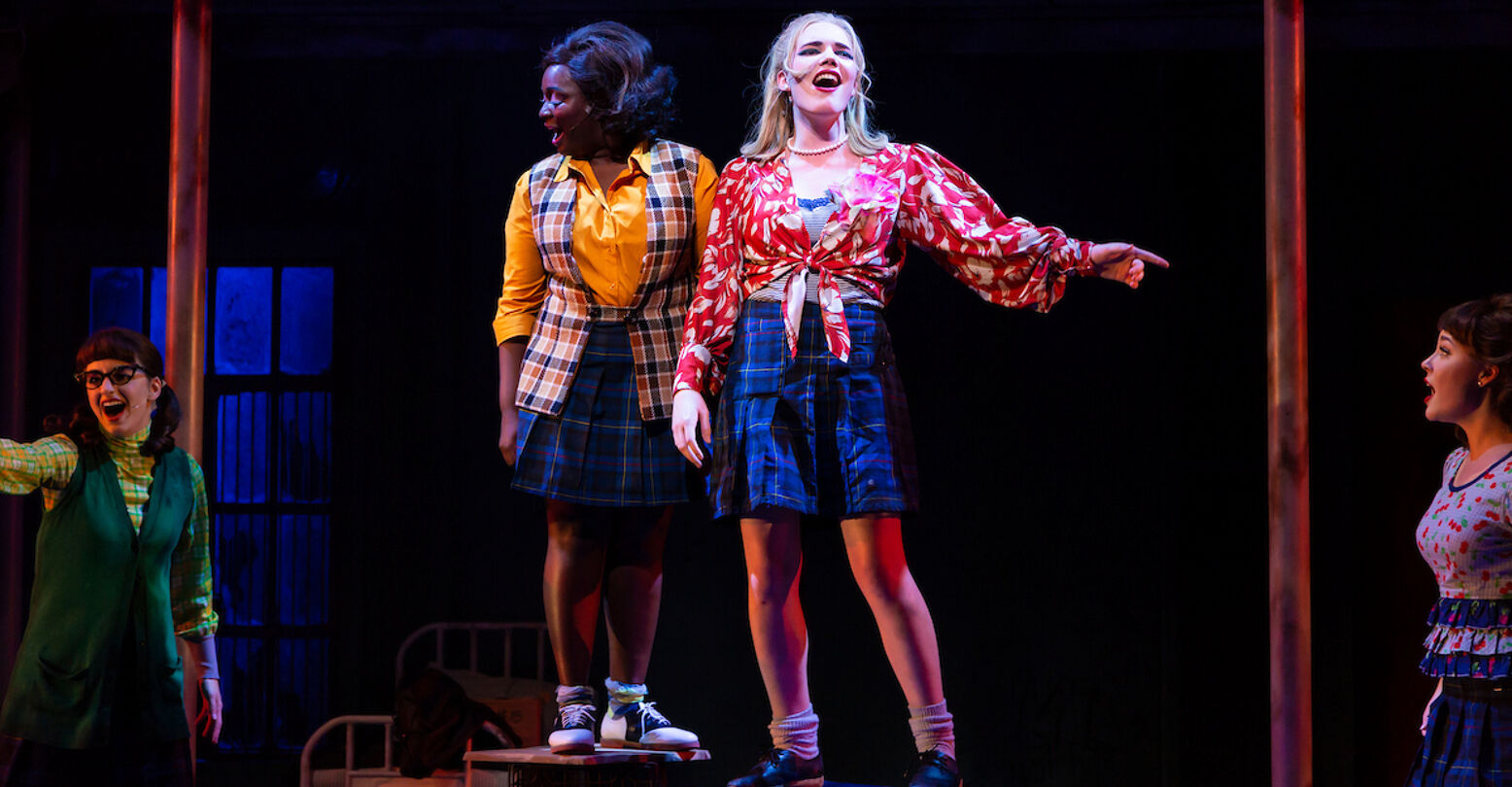 Joe Iconis knows a lot about viral spread, and not just of the COVID variety. A studio recording of the composer-lyricist’s hit single “Michael in the Bathroom” from the musical Be More Chill — viewed more than 5.8 million times on YouTube — inspired a fanatic following that helped prompt the show’s eventual Broadway transfer. Iconis returns with a new video release of “Masochist” from the lesbian rock romance Love in Hate Nation, and INTO obtained the exclusive first look. Will lightning strike twice?

It’s been a decade since Iconis wrote the standalone song, “I Was A Teenage Delinquent!” which was often performed at his legendary Iconis and Family concerts over the years. The “love song for two girls in a Juvie Hall for girls in the 1960s” lingered in Iconis’ mind over the years, resurfacing in 2016 in response to what he calls “the combustible energy of America” after Trump won the presidency.

At the same time, Penn State School of Theater commissioned him to write a musical for the senior class, the only caveat being that it needed to align with the students (seven women and one man). “I wanted to write a show for an ensemble of female-identifying bad*sses who were allowed to be passionate and weird and poorly-behaved and not have to apologize for it or be punished for it,” Iconis tells INTO.

Set in the National Reformatory for Girls (aka Nation), the show centers around a romance between Susannah Son, a Black teen struggling with her sexuality after the suicide attempt that landed her in Juvie, and Sheila Nail — a tough-as-nails, 17-year-old small-time criminal. Also among the group is Kitty, a trans character from a very wealthy family, hidden away by her real estate mogul father. She sarcastically describes herself as “a sexually deviant princess in a tower.”

Though fictionalized and stylized, the world Iconis portrays in Love in Hate Nation is very real.

“Throughout transformations and legal changes in juvenile justice, the character and constitution of the female juvenile offender population have changed very little, with girls infrequently charged with serious law violations and commonly judged in terms of their moral welfare and sexual behavior,” wrote Liz Pasko, Associate Professor; Chair, Sociology & Criminology, University of Denver, in a piece aptly titled, “Damaged Daughters: The History of Girls’ Sexuality and the Juvenile Justice System.”

Iconis, known for his catchy, contemporary scores, penned the song “Masochist” for Kitty with a specific vision in mind.

“I’ve seen so many pieces of art where a trans character is either the comic relief or functions as some angelic, wisdom-spewing symbol. With Kitty, I wanted to make a trans character who was funny and human and took no shit. I didn’t want to write a song that everyone sings about her; I wanted her to be the center of her own moment and to be the one who delivers the message of the show.”

The song is instigated by a 1950s pamphlet that Kitty has stolen from the warden’s office warning against the dangers of homosexuality, which refers to homosexuals as masochists. “The language came from an actual document I found doing research for the show,” says Iconis. “The most shocking thing wasn’t the sentiment because I know many people thought that way and still do. It was the blunt articulation of that line of thinking. The matter-of-factness was chilling. The thought of a queer person in the 1960s, let alone a young queer person, reading it filled me with sorrow. And so ‘Masochist’ became the rebuttal.”

“The idea of demanding to exist sets about a turn in the events of the musical and leads to a full-scale revolution,” says Iconis. “I didn’t want the musical sound of ‘Masochist’ to be treacly or overly sentimental. Our orchestrator Charlie Rosen and I pulled from 1960s influences like the Stax Soul sound of Carla Thomas and Otis Redding, and more modern touchstones like Anohni’s ‘Fistful of Love.’”

Lifting the song off the page in the 2019 world premiere Two River Theater production and the original cast recording is powerhouse vocalist Emerson Mae Smith.

“I really identify with Kitty’s self-resilience and her ability to understand that other people’s hatred and misunderstanding of her has very little to do with her lived reality,” Smith tells INTO. “’Masochist’ is broadly a song about other people’s perception of trans lives and how we try to untangle ourselves from those notions and define an existence that makes us feel most like ourselves, happy, safe and whole. If I spent all our time focusing on what transphobic people believe about us, always trying to meet them halfway, I would live a pretty exhausted life. Kitty has often inspired me to focus on what about being trans brings me joy instead.”

Smith believes the message of Love in Hate Nation extends far beyond the idea of self-acceptance, suggesting that those fundamental shifts must personally happen before they can be implemented more broadly.

“Nation itself functions as a symbol of the bloated, racist and dysfunctional infrastructure that holds America together,” says Smith. “I think Love in Hate Nation offers young people a chance to see themselves as agents of power in the establishment of new systems and norms that hold up the downtrodden and oppressed.”

“For queer and trans kids, seeing unusual and challenging stories about people like them makes them feel like they have a seat at the table and that their stories are not limited to the feel-good and heartwarming,” says Smith. “Theater often wants to play it safe with queer stories and tell versions of histories that we’ve heard many times before. Now is the time to elevate the strange and radical.”